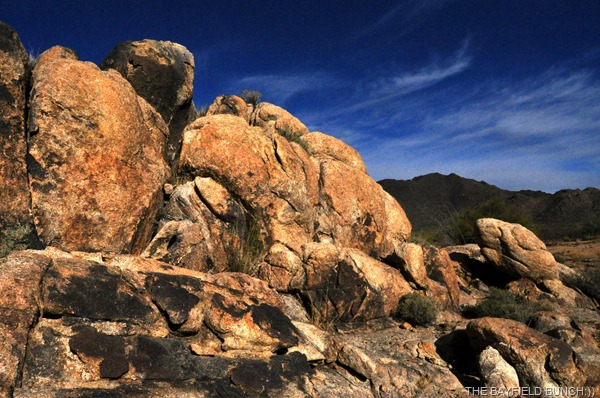 GREAT MORNING FOR A JEEP RUN & WALK IN THE DESERT

Beautiful full moon Thursday night with long lanky clouds skudding across the day’s end sky.  Cool, so I stood inside at my bedroom window for awhile with binoculars in hand enjoying the magical Disneyesque sight in front of me.  Pheebs lay stretched out on my bed basking in a bright swatch of moonlight beaming through my large bedroom window.  I love being in the desert on a moonlit night.  It is a scene like no other. 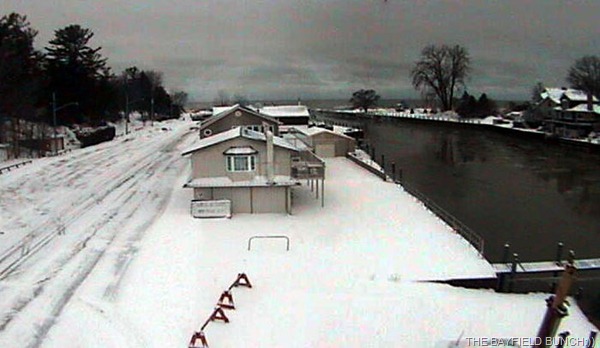 When I saw we were in for a sunny day this morning it sure didn’t take us long to get our buns into the Jeep & head out into the desert.  Now, whenever I mention desert, keep in mind, this is not Lawrence of Arabia stuff.  This is the Sonoran Desert, often thought of as the ‘green’ desert.  And green it was this morning as we happily jounced along it’s roads & ATV trails, dodging deftly around the Creosote shrubs & Hedgehog Cactus . 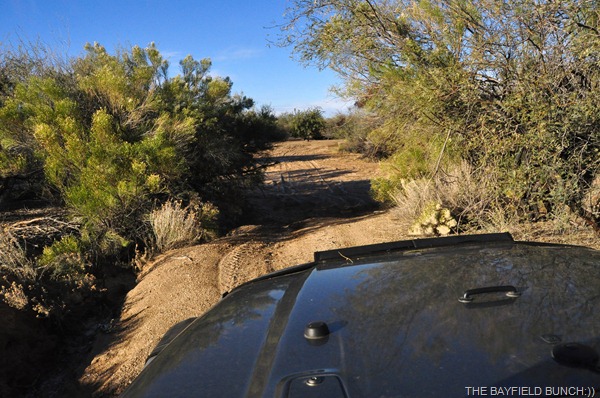 PICKED OURSELVES UP SOME MORE ‘DESERT PIN STRIPING’ THIS MORNING

First stop was the large watering hole we had came across a few days ago when out for a walk.

DURING THE SUMMER MONSOONS, THIS MUST GROW FROM A SMALL POND TO A LARGE LAKE

Lots of large bones around.  Some along the water’s edge & more in the surrounding Mesquite thickets.  Ribs, shoulder blades, large leg & pelvic bones, spines, but no skulls.  Obviously cattle & the skulls are likely hanging on someone’s fence post somewhere.  Some cattle may have drown in the Monsoon rains while others may have fallen prey to Coyotes or Mountain Lions near the watering hole. 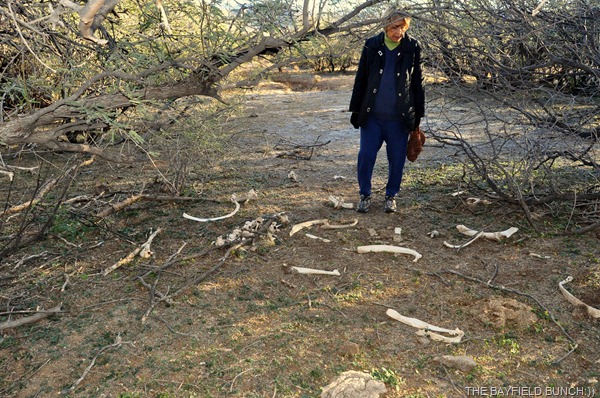 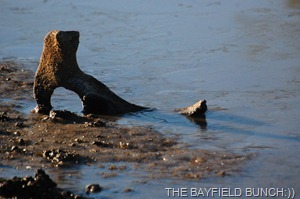 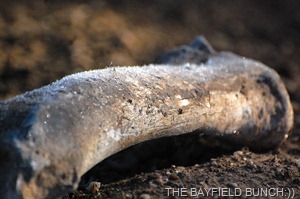 From the watering hole we ambled along through the Mesquite & Palo Verde trees, dodging tall Yucca & Prickly Pear Cactus.  Picked ourselves up some more mighty fine desert pin striping too.  Stopped at a rock outcropping not far from ‘House Rock’ & took ourselves for a nice desert walk. 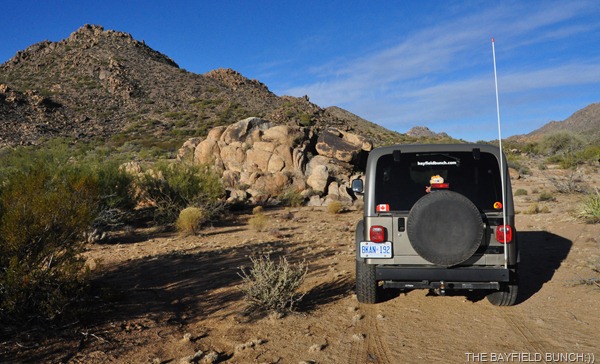 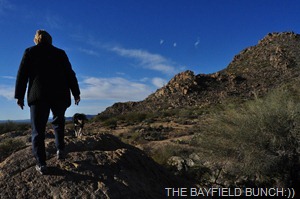 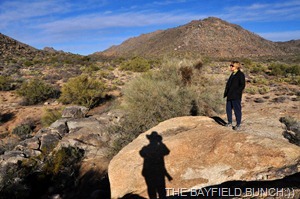 STOP ANYWHERE IN THE DESERT, WALK IN ANY DIRECTION, & IT’S AN ADVENTURE

Pheebs just loves racing around the desert & as I said before, she has learned where to step & where not to step.  Not one sticker this morning as she darted about the thorns & barbs like an old pro. 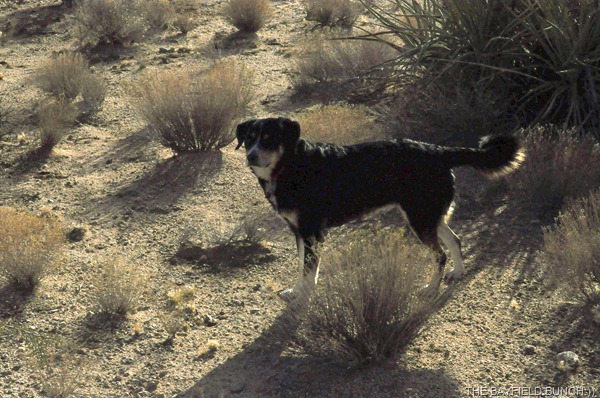 Can’t even begin to tell you how beautiful this desert region is & I never tire of it.  Walking on the desert’s hard packed surface is easy & the scenery changes with every step.  Ringed on 3 sides by towering mountains & surrounded on all sides by a green landscape of many plants.  Rocky outcroppings provide easy rock scrambles.  Even for people like myself with leg problems. 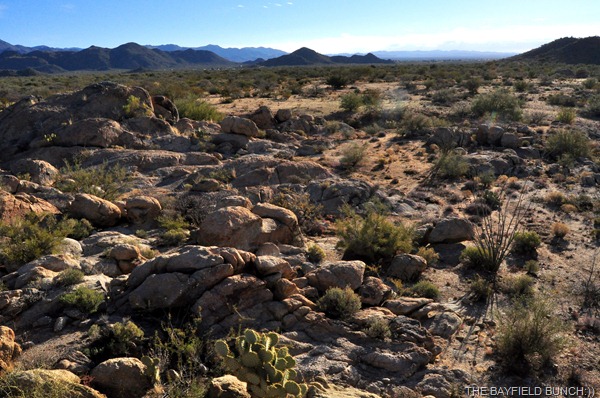 ALTHOUGH LOOKING ROUGH, THE DESERT IS EASILY WALKABLE 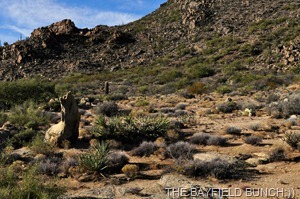 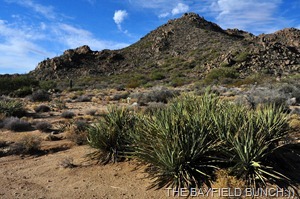 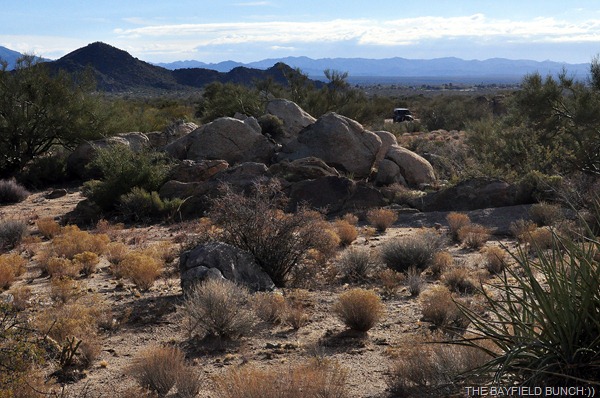 Only critters we saw this morning were cattle carefully keeping their distance.  Occasionally a black body could be seen or a little white face peering through the Mesquite a fair distance away.  Pheebs was busy with her nose to the ground trying to find them.  She loves cows, as many will remember from our days boondocking south of Congress last February. 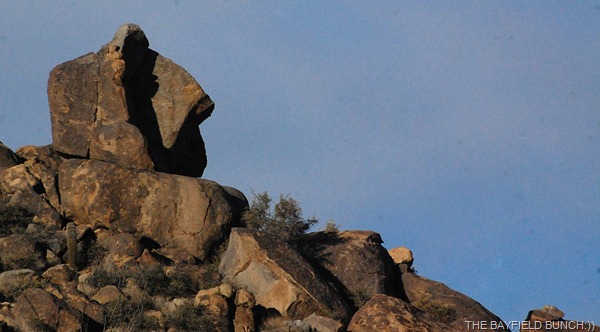 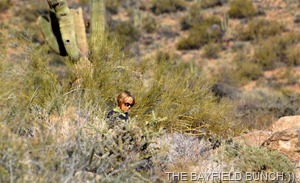 SOME STRANGE CRITTERS OUT HERE IN THE DESERT

Again, we were home before noon.  Short rest & then it was right into my bedroom paint project again & managed to get all the brush edging done on the brick chimney.  Have to get myself a deeper pile roller.  Bricks & mortar are porous so I’ll need something to into those little cracks & crannies.  Couple good suggestions in our comment section but by the time I read them I had already began with the ‘Colorado Trail’ stucco paint.  I figure I am about one third done with the bedroom.  Next….my bathroom. 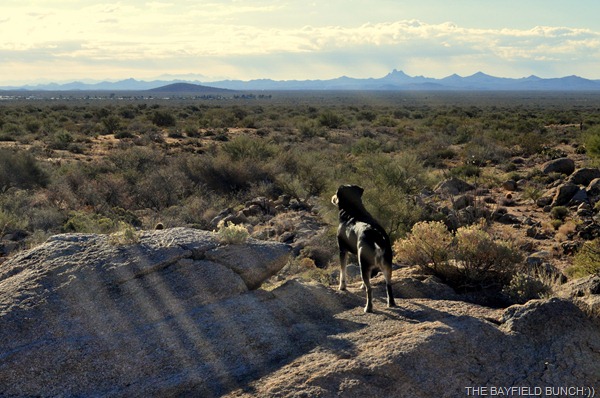 FACING THE MORNING SUN, PHEEBS LOOKS BACK TOWARDS CONGRESS

For anyone interested in running on solar power, you will find AMERICAN TRAVELER'S post interesting today.  We have had our solar set-up 5 years now & it’s a great economical way to free yourself of costly RV Parks:)) 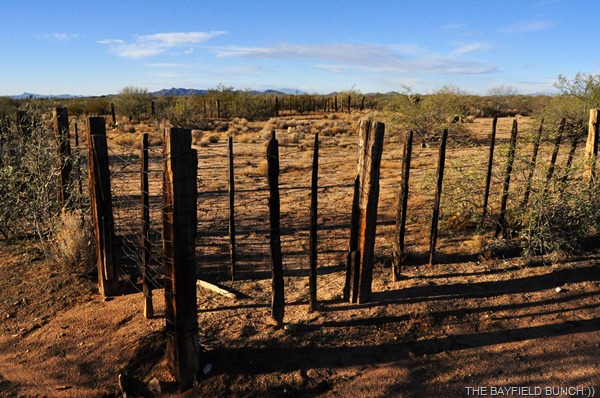 AN OLD LONG AGO CATTLE ENCLOSURE

Molly is fitting in well over at the BIRDING RV'ERS.  Gaining some weight, playing with toys, has a boyfriend, & is busy meeting new people.  Her new Mom & Dad just celebrated 5 years as full time RVers. 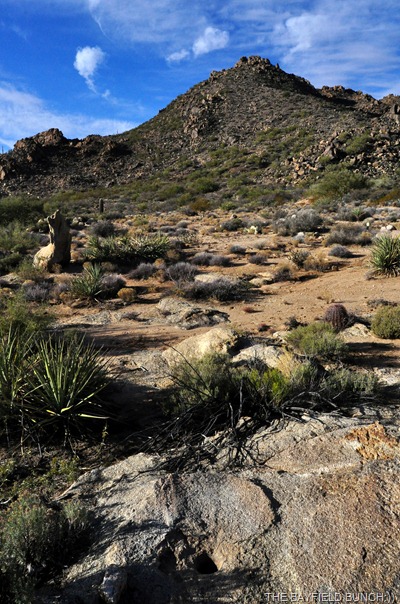 Special thanks to the folks who have taken the time to send in their thoughts & suggestions about my leg & hip problems.  I have tried some of things recommended & am considering others.  I have not gone back on the Crestor & right now have stopped taking my Arthrotec (arthritis medication) to see what happens.  We were surprised to find out we cannot buy Tylenol here in the States. 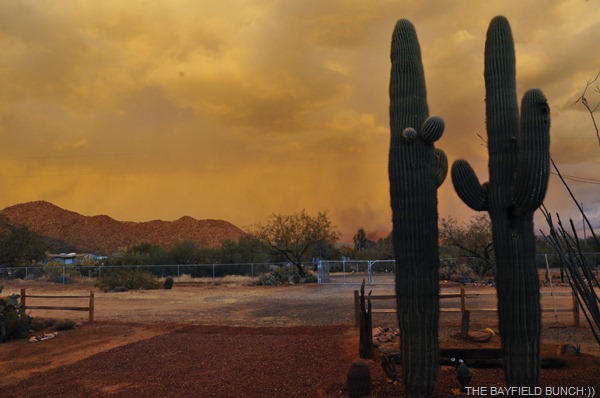 THIS IS EXACTLY HOW OUR STRANGE COLORED LATE AFTERNOON SKY LOOKED ABOUT 5:30 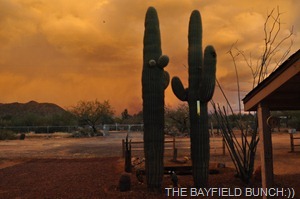 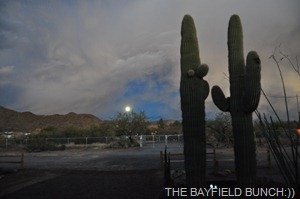 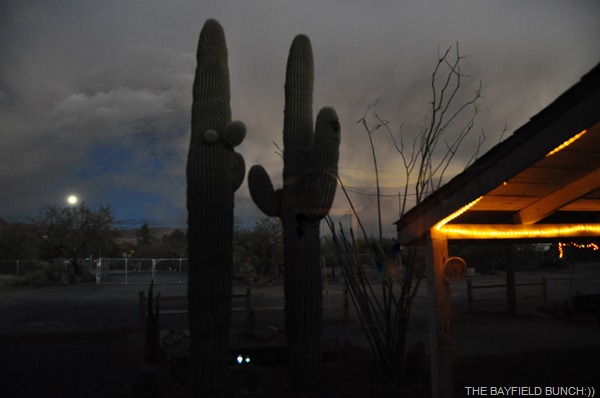 HALF AN HOUR LATER WITH A FULL MOON CLIMBING INTO THE SKY, EVERYTHING LOOKED NORMAL AGAIN

GROANER’S CORNER:((  And a reader sent in a follow up to Thursday night’s Groaner…The poor guy's twin brother showed up at the church and wanted to be the new bell ringer. Sadly, he too had no arms but the church president hired him after he demonstrated a technique similar to his brother's. Things went fine until one day when he ran face-first at the bell and fell to his death. A crowd gathered and someone asked the man's name. The church president responded, "I don't know his name but he was a dead ringer for his brother."