WE ARE ALMOST ALL FENCED IN

OUR NEW FRONT GATES ARE OPEN

It’s really kind of neat now because my bed is positioned right under a large window & I can lay in bed & see the night sky.  When I went to bed last night I could see a star cluster, often mistaken for the Little Dipper.  The grouping of stars is called the PLEIADES .  One of my favorite night sky objects.  So nice to be out here under crystal clear Arizona night skies again.  Stars, Planets, & Constellations marching across the sky from horizon to horizon.  Well, actually, aside from the Planets & Moon, the Stars are stationary, & it is our own Earth which is moving.  Well, moving & rotating that is……….. 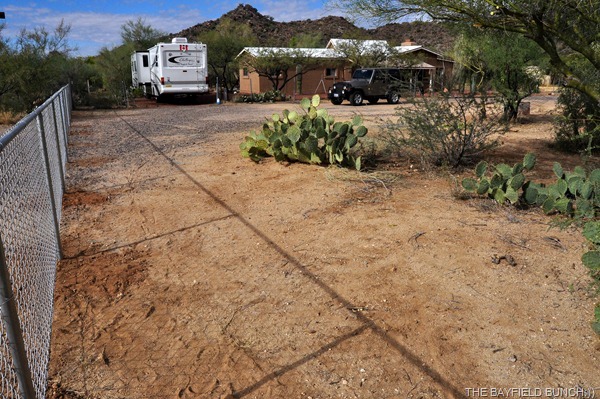 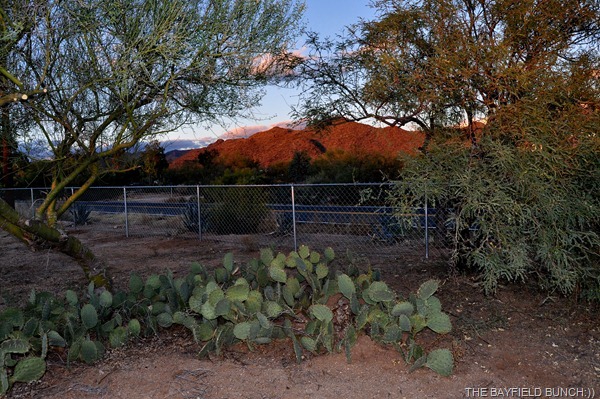 MAYBE NOT AS NICE AS AN ADOBE WALL, BUT A WHOLE LOT LESS EXPENSIVE & IT DOES PROVIDE US WITH SECURITY FROM COYOTES & JAVALINAS

By the time we returned from our morning walk our front yard was abuzz with activity.  Three white pick-up trucks in front of the house & fencing workers busy at various fencing tasks.  One fellow had a saw & was busy leveling the top of the posts.  Another affixed some kind of hardware while another fellow carried & laid long top poles in place.  One truck carried a welding machine & a fellow was busy welding pipes together.  A few hours later they were unwinding the chain link fencing.  And, then it was lunch time. 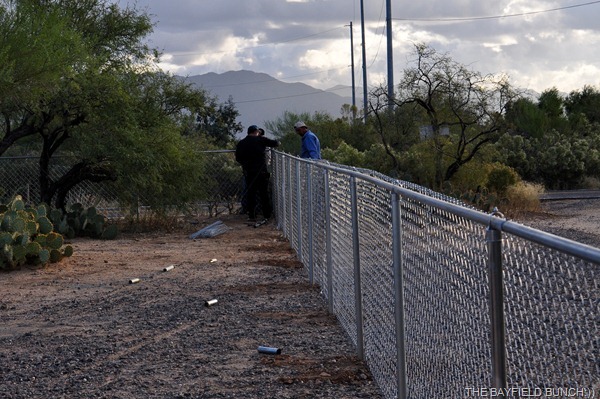 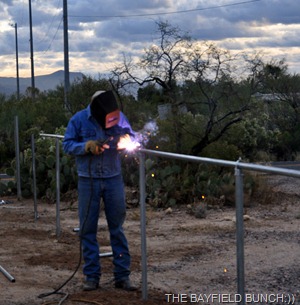 WE HAD A BUSY FRONT YARD THIS MORNING

Let me dispel the old rumor of Mexican folks taking an afternoon Siesta.  These guys were back an hour later & the fence work continued.  Soon the entire front fence was complete including the gates.  Now their attention turned to pulling out the existing fence & posts around the house & next week they will install that fence across the back of the property.  So nice to see the inner fence finally gone from the front & side of the house.  Our acre now looks pleasingly larger. 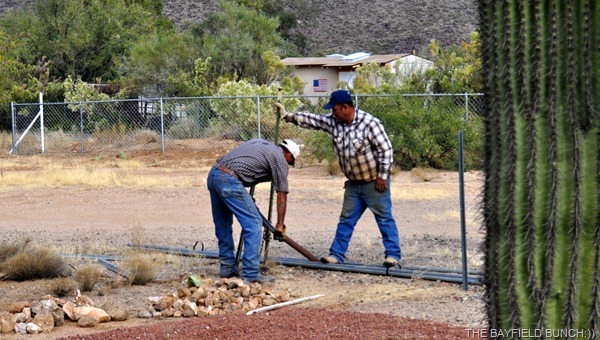 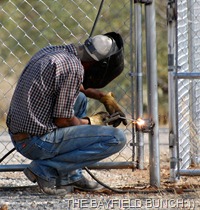 A neighbor from down the road walking her dog stopped out by the road for a chat.  Pheebs & Thunder hit it off right away & the zany stuff was afoot.  Been awhile since Pheebs found a playmate & she was sooooo excited with her new Pal.  Karen, her husband, & Thunder the dog are traveling Snow Birds from Colorado & have lived on Ghost Town Road for the past couple winters. 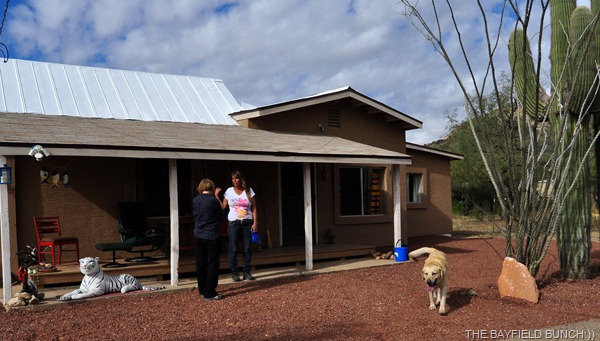 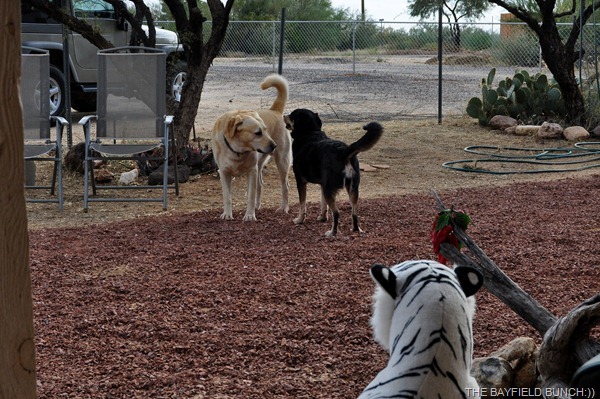 SPENCER LOOKS ON AS PHEEBS & THUNDER GET TO KNOW EACH OTHER

Bev & Jim dropped in this afternoon.  They are in Wickenburg for the season doing a bit of Ranch sitting.  Hadn’t seen them since last March when we did a back roads Jeep tour together.  Jim also prospects for gold during the winter months so knows the back country well.  They spend their summers in Oregon on a Cherry farm.  We are cooking up a couple Jeep runs soon but probably not for a few weeks yet.  This is a link to our previous Jeep day….. JEEP TOUR THROUGH GOLD COUNTRY. 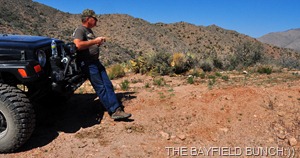 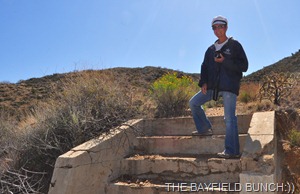 Kelly spent the majority of the day house cleaning while I , yup you guessed it….hung off the end of my shovel, rake, pitchfork & shrub clippers.  More brush burnt up. 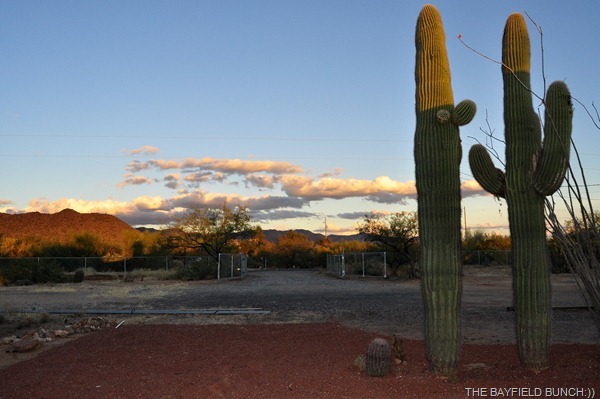 OUR FRONT YARD IS SLOWLY COMING TOGETHER

GROANER’S CORNER:((  Four surgeons were taking a coffee break and discussing their work. The first one said, "I think accountants are the easiest to operate on. Everything inside them is numbered."
"I think librarians are the easiest," said the second. "When you open them up, all their organs are arranged alphabetically."
The third surgeon said, "I prefer to operate on electricians. Their organs are color coded."
"You're all wrong," said, the fourth. "Lawyers are easiest. They're heartless, spineless, gutless, and their heads and asses are interchangeable."