HAD TO THROTTLE MYSELF BACK TODAY 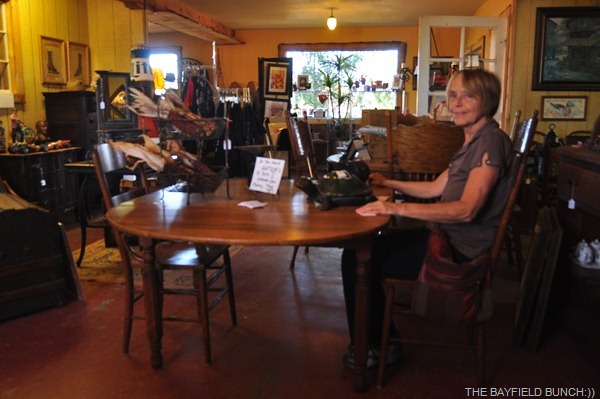 As expected, I kinda overdid my brush clearing Saturday, so today was pay back time & I spent most of the day inside out of the heat working on a few easy house projects. Set up our Shaw satellite dish & found the Anik satellite right away. However, we had to re-activate our receiver after being dormant for 7 months & that cost Kelly two & a half hours out of her day just sitting with her Skype headset  on waiting for someone at Shaw to acknowledge her call.  She was told the long delay had to do with so many people calling in with problems resulting from Hurricane Sandy.  If Kelly would have hung up she would have lost her place in line.   Within seconds of having someone on the line, our receiver was updated & we had our first picture on the new TV.  Gotta love that high definition stuff.  Upgraded our package as well in an effort to find some interesting programs for a change….if that is at all possible:((   Now I can totally aggravate myself with CNN again. So glad to get away from the local stations we were pulling in with our antennae while in transit last week. And Phil, no, I don’t think we ever did see a Phoenix station. 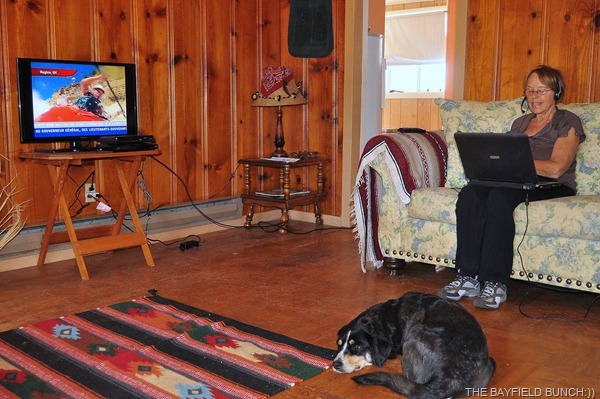 Kelly had dropped into the Congress Mercantile Store again Saturday & spotted a used wooden dining room table with 4 wood chairs she liked. Plus, a small table to put our television on. Took us about 3 minutes to drive over & have a look at those things. Came home with the items we looked at in the store.  Store owner Judy was again helpful with local information & co-owner husband Jerry was good enough to deliver the 2 tables & 4 chairs for us. At least we now have a table to sit down & eat at.  We do not have a table in the Motorhome so I’m gonna miss sitting in my chair dribbling soup down my shirt.  With the purchase of the little dining room table, we will now move lock, stock, & barrel into the house Monday but will continue to sleep in the Motorhome until we get the bed problem figured out. 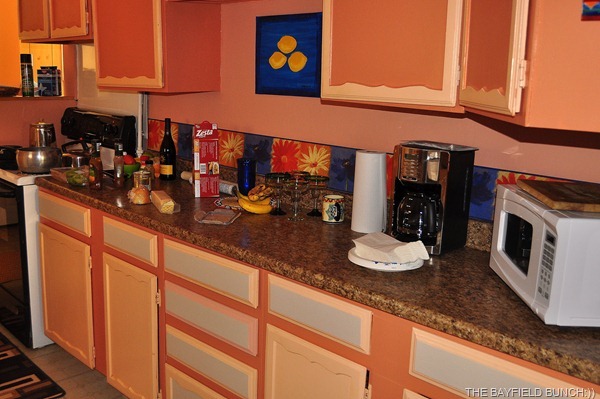 And a reminder to folks to check their Spam folders occasionally. I never seem to remember to do that & Kelly happened to find 4 comments in there from folks over the past month or so. Found one in there from Karen & Steve a month ago. And another one from Linda A. No idea why they end up in a Spam folder & I have no idea on how to prevent that. 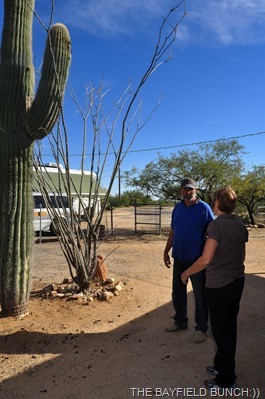 KELLY CARRIES IN THE LAST KITCHEN CHAIR & JERRY TELLS US A BUNCH OF STUFF ABOUT SAGUARO’S WE NEVER KNEW.  HE ESTIMATES OURS TO BE ABOUT 200 YEARS OLD

I seem to recall a recent commenter asking something about Rattlesnakes. So far in all our southwest travels we have never seen one. We know they are around & probably close by sometimes, but so far so good. They are not active in the cooler cold weather but with the hot days we are having right now they could be out & about. It was on my mind the past couple days as I have been clearing brush on the property. I'm careful not to stick my hand anywhere I can't see & I am relying on the Rattlers to at least give me a buzz if I'm getting too close. A wire fence will not stop them from coming on the property but a special wire around the bottom helps. An adobe wall would keep them out but it's just much too expensive for us to wall in our entire property. Our main reason for fencing is to keep the Javelinas (wild pig like critters) out. They will kill a dog pretty quick & can cause serious injury to people. And, they are in the habit of coming into our back yard at night.  At least they were last March when we were here. 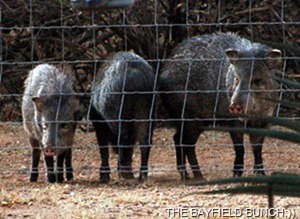 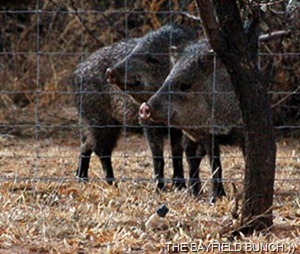 TOOK THESE JAVELINA PHOTOS NEAR ELFRIDA ARIZONA IN NOVEMBER 2011

Casita Wren had a question about how we stay warm on cold nights while traveling. We had a Legacy Blue Flame Heater installed in Quartzsite about 4 years ago. It is extremely rare for us to run the rig's furnace. Doesn't take up much space, throws a great heat, & runs on propane. It's thermostatically controlled so we just set it for whatever. And, it has a pretty blue flame fireplace look. Very fuel efficient & we never RV without it. Interestingly enough, they are, or were, made in Mississauga Ontario but could only be bought in the States…Side note:  While looking for the Legacy website I came across a page that said ‘images of Blue Flame heaters.  When I clicked on THIS SITE a multitude of photos came up.  And, there was our little Motormouse.  Second photo in shows Motor sitting beside our blue flame heater in Quartzsite back in January 09.  Seventh photo in is Motor on my bed snuggling with her Teddy Bear.  No Legacy Blue Flame Heater in sight….just our little Motormouse (Cora) & her Teddy.  Motor died the very night we left our house in Congress last March for the long sad drive home to Bayfield Ontario. 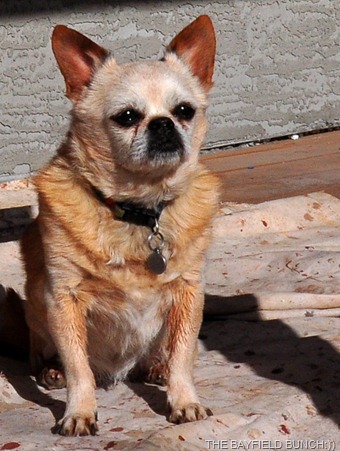 OUR LITTLE MOTORMOUSE JUST A COUPLE DAYS BEFORE SHE WAS GONE

We are still waiting to hear back from the fence guy who we think is in Mexico at the moment. Met our next door neighbors on our north side for the first time Saturday. Nice folks & it just so happens they are best friends with the fence building guy so they assured us they would get us a good deal on the fencing. I could tell the neighbor lady was very happy about me cleaning up our big weed infested overgrown property. Bud, our neighbor to the south is in California until January so we haven't seen him. 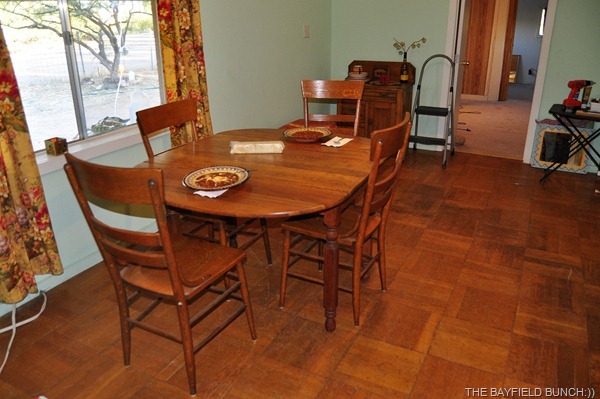 NOTHING FANCY, JUST OUR FIRST MEAL IN THE HOUSE…CHILE CON CARNE:))

When Kelly opened our front door tonight to take Pheebs out, a bird quickly flew right into the house.  Took nearly 5 minutes to catch the little feller but I was finally able to cup it softly in my hands & return it to the outdoors.  This little bird turned out be a persistent fellow & nearly got right back inside again.  Quickly closed the door but it tried to get through our screen.  Clung to that screen for quite awhile watching us.  I was close enough to the little guy to see it’s feathers moving from it’s beating heart.  We were on an eye to eye level only inches way.  One of us finally blinked & he flew up into the rafters of our porch & headed for bed. 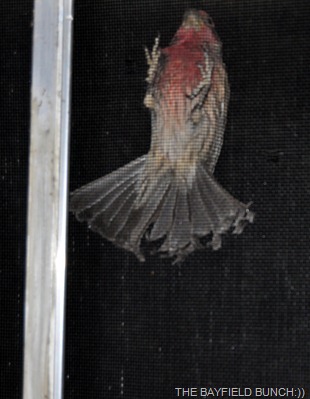 These hot days bring warm nights, so I was outside with my binoculars tonight.  The Milky Way stretched from horizon to horizon & seemed almost close enough to reach up & touch.  One of my favorite constellations, the Pleiades (Subaru or Seven Sisters) was visible low on the northeastern horizon.  My 7x50 binoculars have always revealed far more stars in this cluster than are visible with the naked eye.  But, when I put my new 15x70 Celestron binoculars on my tripod & looked at the Pleiades for the first time through them, I was totally amazed at how many more stars in that cluster were now visible.  A much different star pattern than I had seen before.  From the Pleiades I followed the Milky way & swung up through Perseus & Cassiopeia.  The sky was literally littered with billions of what appeared to be patches of light fog.  The glow of light from stars so far away they are not even visible.  How great it is to be under the big Arizona night sky again………..:)) 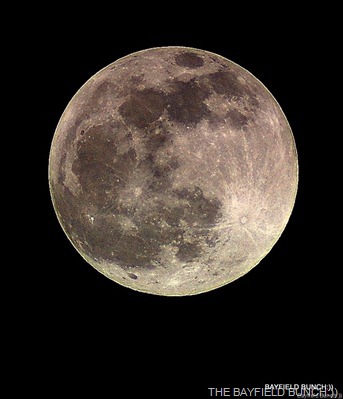 GROANER'S CORNER:(( After digging to a depth of 100' last year, Russian scientists found traces of copper wiring dating back a 1000 years, and came to the conclusion that their ancestors already had a telephone network at that time.
So as not to be outdone, in the weeks that followed, American scientists dug 200', and headlines in the US newspapers read: "US scientists have found traces of 2000 year old optical fibers, and have concluded that their ancestors already had advanced high-tech digital telephone 1000 years earlier than the Russians."
One week later, the Irish press reported the following: "After digging as deep as 500', Irish scientists have found absolutely nothing. They have concluded that 5000 years ago, their ancestors were already using mobile cell phones".