GOT A LITTLE CROWDED IN THE JEEP TODAY 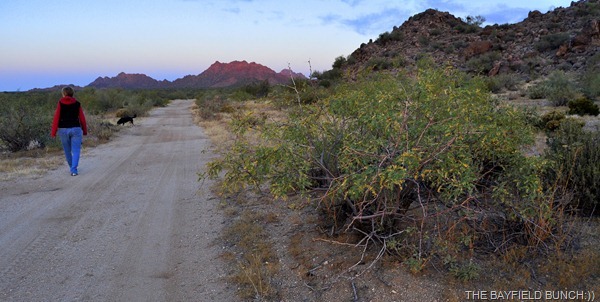 OUR FIRST MORNING DESERT WALK OF THE SEASON
First, an apology to the city of Albuquerque for my 'smog assumption’ a couple days ago. Received this comment from Debbie...'Al, that wasn't smog you saw in Albuquerque. There was a prescribed burn in the Jemez mountains and it drifted down our way. Most of the time, we have the most beautiful blue skies and clear air that you will ever find. 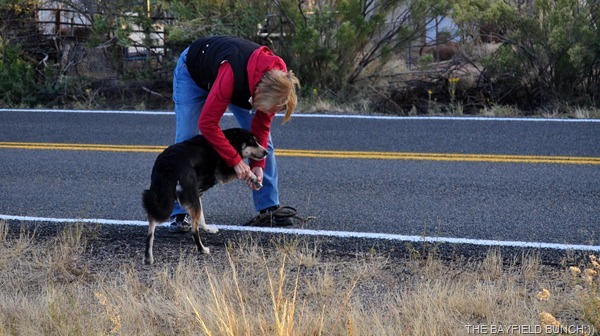 PHEEBS GETS A LITTLE HELP WITH A STICKER THIS MORNING
Forgot to set my night clock to Arizona time again so when I woke up & checked my clock it said 4 a.m. Got up, took Pheebs outside & then realized it was really only 3 a.m. Oh well, we were up now so Pheebs & I just took in the beautifully quiet starry night, cricket sounds & mild 63F night temperatures with stars, stars, everywhere:)) 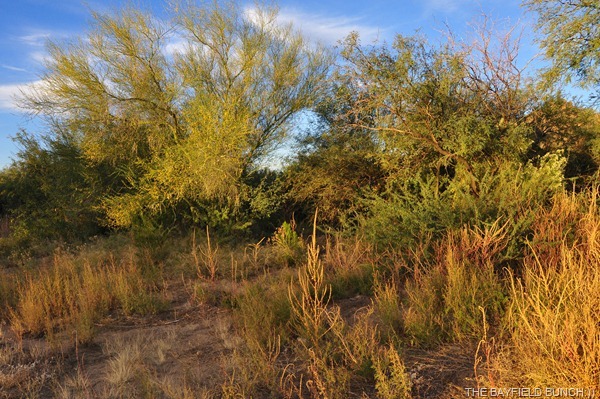 THIS IS PART OF THE BRUSH CLEARING I AM WORKING ON:))
Our time of arrival in Congress Thursday morning was 11:05. Would have been a bit earlier if it hadn't been for some road construction in the Skull Valley & a stop at the Yarnell Bakery. On the way to Congress we talked about not having to unload the Motorhome when we get to our house. Two hours after arriving we had most of the rig unloaded as well as all of the Jeep. We don't listen to each other very well sometimes. I think we were both too excited to just sit down & do nothing. By late afternoon we had no choice....we were both totally wrecked. 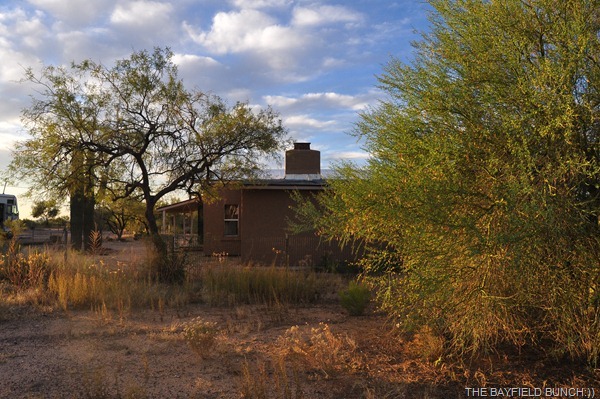 I WILL TRIM THAT PALO VERDE TREE ON THE RIGHT, UP TO THE 6’ LEVEL
Sure have a lot of work ahead of us but that's Okay because that is exactly why we are here. Had a little chuckle at myself early this morning. Because I was already up, I headed outside before the sun was over the horizon & tackled the weed problem with the battery operated weed whacker. Battery only lasts about 20 minutes & then I have to charge it again. And, I realized the battery whacker wasn't powerful enough to chop down a lot of the tougher weeds I was faced with. No doubt about it, I was going to need a gasoline powered whacker. But I did have a little chuckle at myself, out there by the light of the moon & early dawn, buzzing down the weeds. By 9 a.m. our temps were rapidly climbing & that was the end of the yard work for the day. I don't work well in the heat anymore.

THE DREADED YELLOW JACKETS ALONG OUR ROOF LINE
After talking to the water guys again this morning we came up with some good leads on a fence builder guy, a local handyman by the name of Indian Joe, a great place to buy desert trees & shrubs, & some good tips on where to buy a few yard work tools. Headed up into the Weaver Mountains to the Yarnell Hardware store & came home with a wheelbarrow & a gasoline powered weed whacker. We've seen some rather unique hardware stores in our travels.....& then we walked into the Yarnell store. Two people could not pass one another in this small cramped hardware store, but the two owner Brothers have everything from soup to nuts packed in there. Next time back I'll grab some pics of the well known Yarnell hardware store. 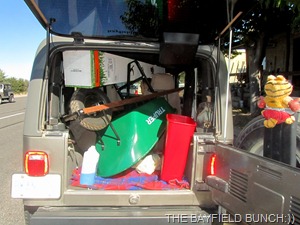 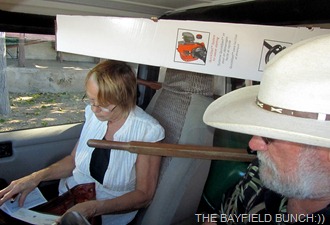 A BIT CROWDED IN THE JEEP THIS AFTERNOON
Aside from a mild coating of dust on the floor the inside, the house looked fine when we walked in Thursday morning. Our March roof repair may have worked because we didn't see any new evidence of water damage. Our house's stucco job from last March looks fine & everything is intact. In other words, the mud didn't fall off during the summer Monsoons. 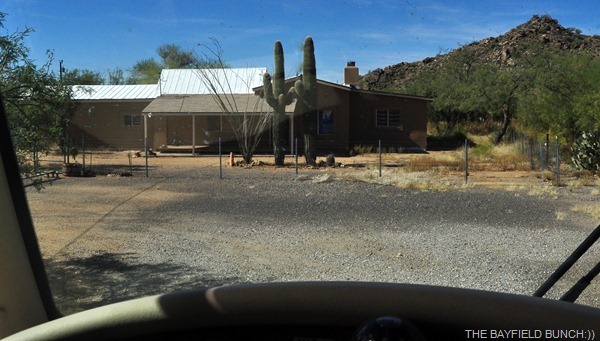 PULLING INTO OUR DRIVEWAY THURSDAY MORNING
Everything looked good, but I spotted a bunch of Hornet looking things along a roof line. Having never seen them before, I didn't know what they were. About an hour after we got home, a guy showed up from the water company to turn our water on at the road. When he lifted the lid on the water box he immediately jumped back. Yellow Jackets. He headed back to the depot & returned with a guy in a bee suit. The Yellow Jackets were sprayed & our water was finally turned on.  Lucky break for me that I didn’t turn the water on myself like I did last March.  Showed the guys all the Hornet things along our roof line & the bee suit guy said, "Yep, Yellow Jackets all right. With that, he hiked up my ladder & gave them a good spraying. He had to tear off a board to get the spray inside the roof to get at the nests. Another old board has to come off so I will try to do that myself when the weather turns colder & knocks out the Yellow Jackets. Thought that was really decent of the water guys to go out of their way to help us out with those Hornets. It's just the way folks seem to be in these here parts. They used up 2 full cans of Hornet spray. I think we may have to get a case of that stuff by the looks of it. 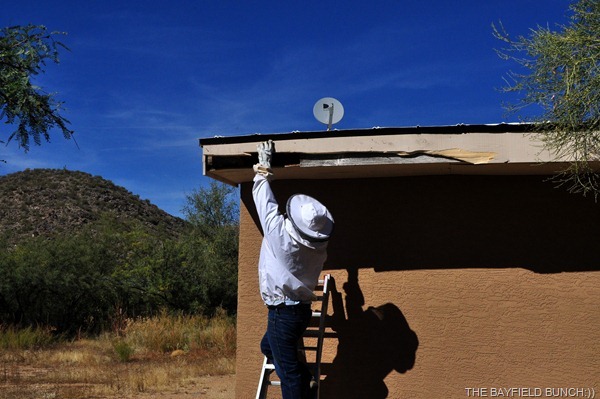 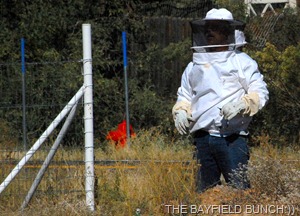 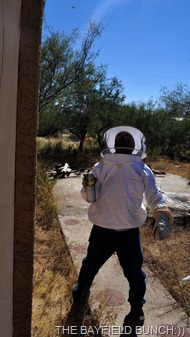 SPRAYING THE YELLOW JACKETS
Our rig's gray tank was filled to the brim so knew I had to try & do something before the gray water backed up into the tub. Amazingly enough I was able to summon up enough patience, get my socket wrench set out & undo the 4 bolts & remove the valve. Expected water to come gushing out........but it didn't. Couldn't believe it but the drain line was totally plugged with about 4 inches of grunge. Probably about 10 years of grunge too. It was soft so I was able to easily dig most of it out with a screwdriver. Then, the grunge began to move, & 'WHOOOOOOOOOSH'........ we had Niagara Falls happening right there & then in the bin. I had expected that would happen so had everything cleared out of the way. Needless to say we had a mini lake going on under the rig. There is a garage that does RV repairs in Congress so think I will get them to install the new valve which we already have. Like I always say, 'if I want something important done right, I gotta get somebody else to do it'. Rig is in need of an oil change & filter anyway so will hopefully get all that done at the same time before too long. 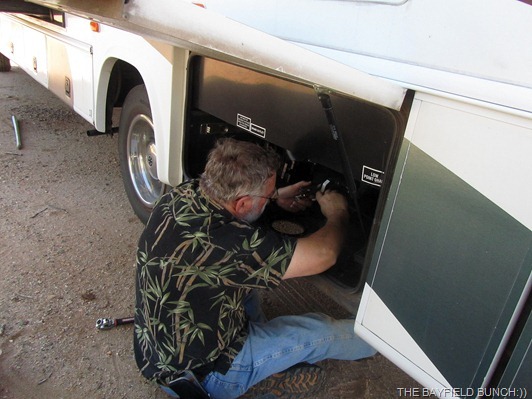 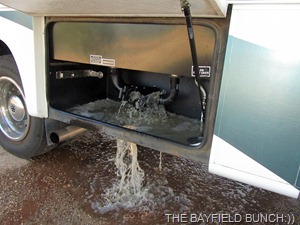 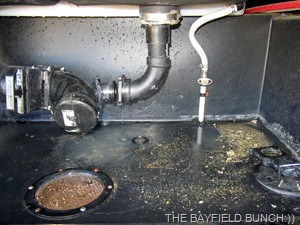 Our Verizon signal was sketchy Thursday but we did think it was working better than in March. Maybe the Verizon guy was right & they did upgrade the tower. This morning we tried out our ‘Wilson Sleek’ that I pooh poohed' last March & 'bang-zoom' it was like we were on high speed. Nice to have another problem taken care of:)) 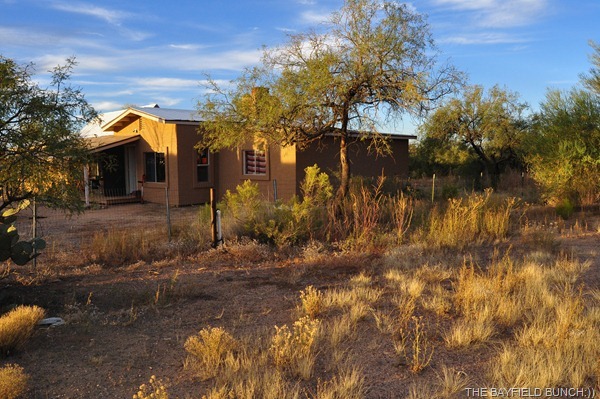 AS SOON AS WE TRANSITION INTO THE HOUSE, I WILL PARK THE RIG HERE IN THE FOREGROUND
First thing I heard when I stepped out of the Motorhome here Thursday was a Rooster crowing just up the road. A neighbor has chickens & I like that barnyard sound. Second thing I heard was a Cactus Wren sitting on one of our 3 front yard Saguaros. We have a lot of birds here so I'm looking forward to getting some backyard feeders up. And, the third great sound was.....Crickets. I love the sound of Crickets. And, like I said Thursday, it is just so great to see everything still so green. We may still be very tired here at the Bayfield Bunch, but it's a good kind of tired:))

SUNRISE ON GHOST TOWN ROAD
GROANER'S CORNER:)) An airline pilot wrote that on this particular flight he had hammered his plane into the runway really hard. The airline had a policy, which required the first officer to stand at the door while the passengers exited, give a smile, and a "Thanks for flying XYZ airline."
He said that, in light of his bad landing, he had a hard time looking the passengers in the eye, thinking that someone would have a smart comment, but no one seemed annoyed. Finally everyone had gotten off except for one little old lady walking with a cane. She approached and asked, conspiratorially, "Sonny, do you mind if I ask you a question?" "Why no Ma'am, what is it?" "Did we land, or were we shot down?"
--------------------------------------------------------------
- Tourists see the world, travelers experience it.
- Home is where your pet is:))
- "If having a soul means being able to feel
love and loyalty and gratitude, then animals
are better off than a lot of humans."
(James Herriot)
- The pessimist complains about the wind; the optimist expects it to change; the realist adjusts the sails -William Arthur Ward
- The only thing better than right now will someday be the memories of right now...AL.
- It is not so much having nothing to do as it is not having the interest to do something....AL.
- OUR PHOTO ALBUMS - .https://picasaweb.google.com/117858411710794543295/
stargeezerguy@gmail.com
Posted by Al Bossence at 11/02/2012