GALLUP NEW MEXICO TO OUR HOME IN CONGRESS ARIZONA… GRRRRRREAT:)) 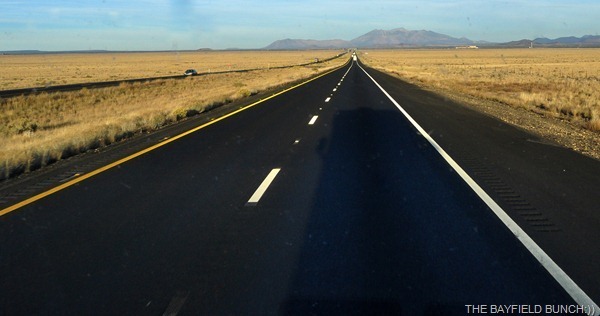 FLAGSTAFF ARIZONA IS JUST AHEAD SOUTH OF THOSE MOUNTAINS
I could easily write an entire post on just how grrrrrrreat it feels to finally be at our house…..but, first things first.

THE SAN FRANCISCO PEAKS NORTH OF FLAGSTAFF ARIZONA
We dropped another time zone today so I think it was about 4:30 this morning Arizona time we were up getting ready to hit the road. Really cold out as I did a walk around checking lights, etc. The Walmart parking lot was quiet with maybe half a dozen RV’s scattered about. Despite the heavy I-40 traffic not far from our door, we did have a decent night’s sleep.
---
Plodded steadily westward in the dark for a couple hours before catching the first glimmer of dawn. Light traffic & no wind, so we just kept the hammer down with only one fuel stop somewhere east of Winslow. What a great feeling it was knowing it was our last day on the road for awhile & we would soon be at our house in Congress. 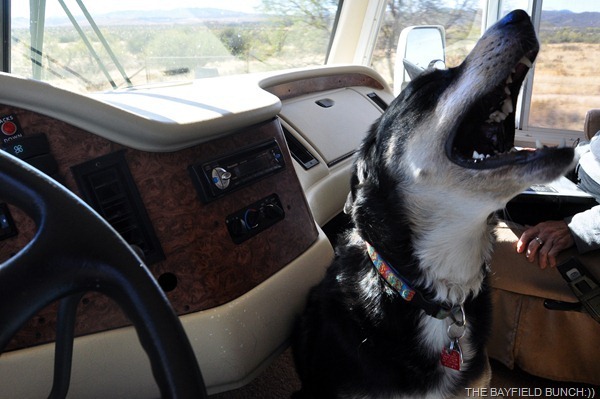 PHEEBE LOVES HOWLING ALONG WITH THE ‘SONS OF THE PIONEERS’
We had driven I-40 eastbound in that area a couple times before, but never westbound so the scenery was new to us. Caught sight of our first large mountain as we approached Flagstaff. Have seen the San Francisco Peaks several times before but never from the east side. Our altitude increased as we approached Flagstaff & how great it was coming up from the lower flatter plains & mesas of eastern Arizona onto the higher Colorado Plateau. Pine forests stretch for as far as the sky can see, growing up & over hillsides, climbing to mountain tops, & filling canyons & valleys. It is truly beautiful country stretching southward to meet up with the northern edge of the Sonoran Desert. And, it is that very northern edge of the Sonoran desert where our house is. Only 12 miles separate us from the higher Pine tree Colorado Plateau.

BIT OF FOREST FIRE SMOKE IN THE MOUNTAINS AHEAD AROUND WILLIAMS ARIZONA
There are 3 ways to reach Congress from the Flagstaff area. Two of those ways go south from Flagstaff & the third one runs south from Ash Fork. We went home last March via the Ash Fork route & that is the way we took back to Congress today. Can’t tell you how great it felt to finally turn off I-40. We had been on that Interstate since Oklahoma City & on Interstates all the way from near Rochester, New York. How nice to be on a quiet two lane highway again & the drive down through the Chimo Valley to Prescott was soooo relaxing. 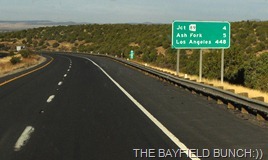 SOOOOO HAPPY TO SEE THESE SIGNS 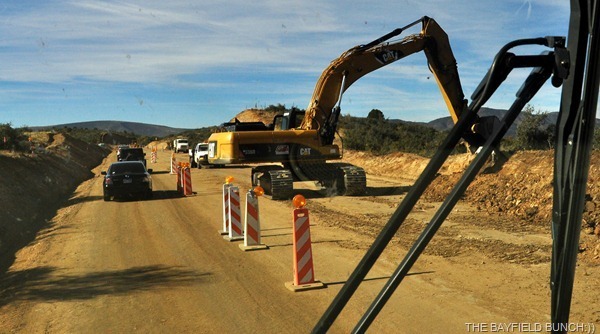 OOPS, A LITTLE CONSTRUCTION BETWEEN PRESCOTT & SCULL VALLEY
Garmin Gertie weaved us through the north end of Prescott & put us on track for Skull Valley. There are two ways to travel between Prescott & Congress. Both are mountainous, one is very scary & the other one is kinda scary. I strongly suggest RV’ers take the kinda scary route. We did the very scary route in the Jeep last March & you really do not want to do that one in a big RV. However, the scariest part of our whole trip took place in the last 10 minutes of our drive.

THE COTTONWOODS ARE JUST BEGINNING TO CHANGE COLOR
Coming down the steep twisting grades of the Weaver Mountains between Yarnell & Congress will test anyone’s driving skills. Brakes, gear down, brake again, try an even lower gear. Brakes & gears & preferably more gears than brakes. Great feeling of relief to reach the bottom & glide right on into Congress. 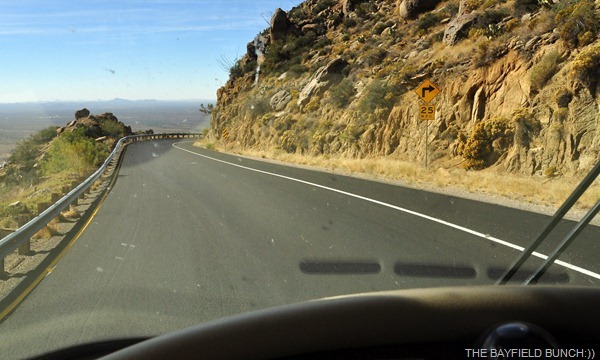 Unhooked the Jeep in a large dirt parking lot across from the fire hall. It hadn’t been off since we left Spencerport New York last Saturday morning. Kelly went on ahead in the Jeep & I followed the short distance down Ghost Town Road to our house. 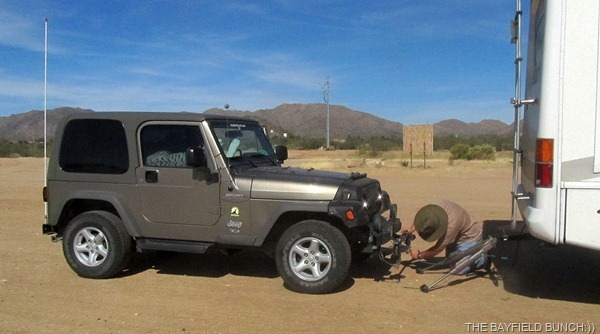 UNHOOKING THE JEEP IN CONGRESS 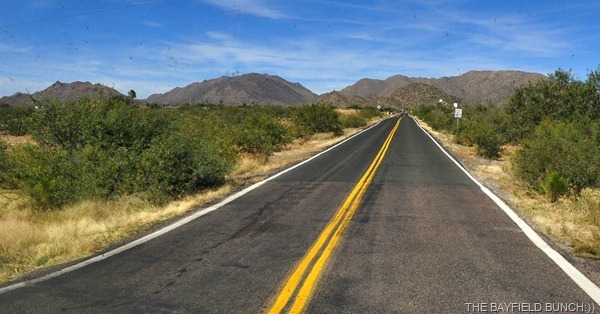 JUST STARTING DOWN GHOST TOWN ROAD & OUR HOUSE IS ABOUT A MILE DOWN THERE ON THE LEFT
What a totally super great feeling it was to turn in our driveway &……shut er down. 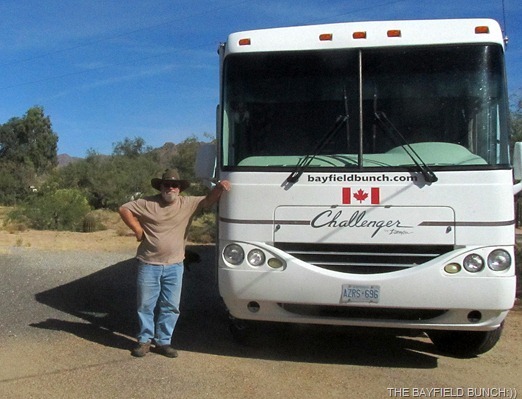 We found everything inside the house exactly as we left it. The outside was a bit of a different story. With all the rain this summer, things had really grown & our yard was in quite a mess. We were surprised at how green everything was. But, I will get to all that Friday, including….the Yellowjackets. Tonight we are both so tired we can hardly move, & that includes the Pheebs. But, it’s a great kind of tired & we are all soooooo happy to be at our south-west home:)) 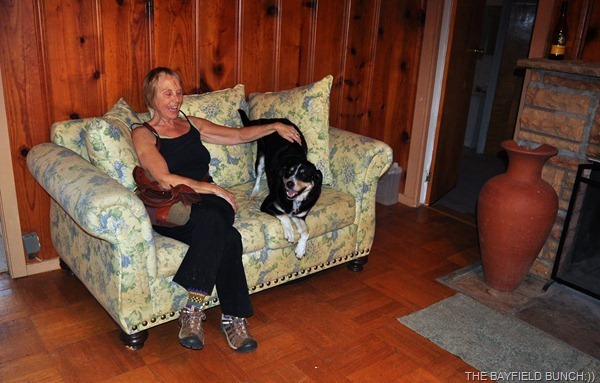