A VISIT TODAY FROM GEOGYPSY

Nice to wake up to a comfortable 60F in Congress this morning.  If we were still in Bayfield we would would have been waking up to 25F temps.  It’s no wonder Bears, Squirrels, & Turtles hibernate & Snow Birders like ourselves head south for warmer temperatures. 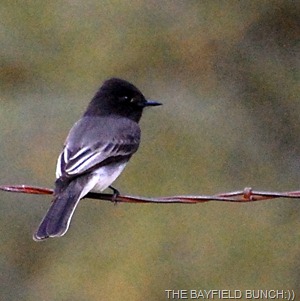 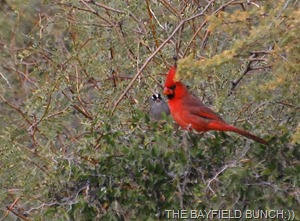 Jeff, over in the Shout Box wondered about the tall white aerial on the back bumper of our Jeep.  Not functional as a CB or Ham radio but generally carries a small orange triangular flag for visibility when off roading.  Vehicles in gullies & washes are hard to see so the orange flag atop a tall aerial is often the only thing visible & warns other drivers of it’s presence.  Suppose I could take it off while not off roading but it’s just easier to leave on.  Besides, if I took it off I would probably never remember where I put it.  Might come in handy next week when we head off into the desert in search of

Some may wonder how we ended up in Congress Arizona.  I can tell you, it was not planned.  Beginning the early part of our long journey home last year we headed northeast from Borrego Springs California with the destination of Lake Havasu in mind.  Had never been there so figured we’d boondock in the area & have us a look around.  Unbeknownst to us, we could not have picked a worse time or day to head into Lake Havasu.  It was PYROTECHNICS week-end & I think there was something else going on as well.  Traffic, traffic, everywhere.  Up till then we had spent the previous winter months quietly boondocked in various spots in Arizona & California.  When we rolled into Lake Havasu on that Saturday Pyrotechnic week-end we were in for a bit of a shock.  The few boondocking sites south of town were jammed full of RV’s.  Four lane traffic was heavy as we rolled into Lake Havasu & that traffic flow jsut carried us right through town & dumped us out the other side.  It was a little overwhelming for a couple of country bumpkins like ourselves.  And besides, I was a bit cranky that morning due to a poor night’s sleep.  To make a long story short, we decided to retrace our tracks back through Lake Havasu, head south & get ourselves back down to the sanctity of the quiet desert just west of Bouse Arizona.  Spent a few days there relaxing & deciding which north-east route to take from there.  Looked like we might be able to head east for the town of Wickenburg & head north from there on our way home.  JANNA had told us of a boondocking spot just south of Congress & it was while boondocked here for a couple weeks that Kelly noticed a house & property for sale on Ghost Town Road.  And, that’s how we arrived here:)) 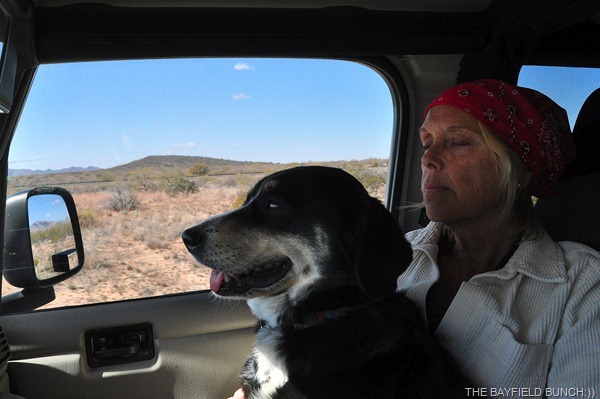 After our hectic traffic morning in Lake Havasu & failure to find a quiet boondocking site, I vented my frustrations in my blog that night & shouldn’t have done that.  It wasn’t Lake Havasu’s fault that we blundered into town during the busiest week-end of the year.  Always felt bad about that post & maybe one day we’ll slip on over there again at a quieter time & enjoy what Lake Havasu has to offer. 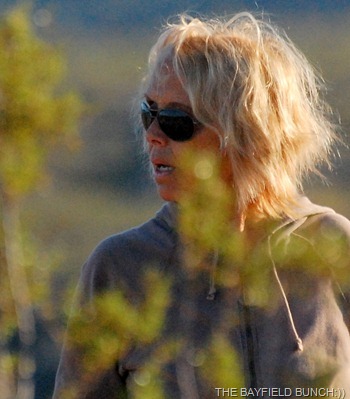 ONE OF MY FAVORITE KELLY PHOTOS >>>

A lot of the brush clearing I did this past couple weeks was Palo Verde & Mesquite tree trimming.  Aside from a few dead branches, most of the limbs were green.  Can’t burn green wood so that is what we had to have had hauled away.  Not logical to pile all that green brush & let it dry out until we returned next year.  Fire hazard.  The bigger Mesquite tree limbs I sawed up & kept for fire logs next year.   You can see this was a major clean up job these past couple weeks…….& I still have a little less than a third of an acre to weed-whack, rake, & burn. 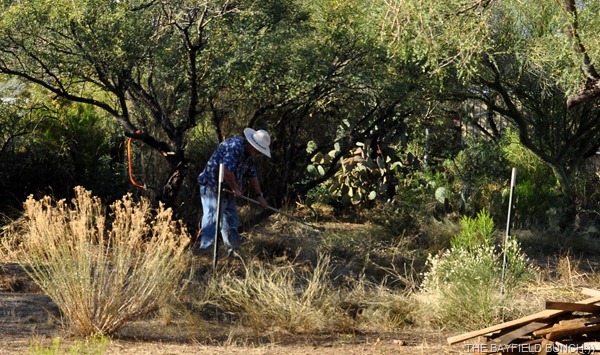 THIS CANDID PHOTO KIND OF SUMS UP MY DAY

Not much to tell you about our day.  Helped Kelly put up curtain rods & curtains, burned some more brush & started the last phase of my ground cover clean-up project.  Marteen & his fence crew began dismantling our inner fence surrounding the house & began re-installing it across the back of our property.  Have held off on my Cactus planting until I can get a book identifying the various Cactus plants & what locations they are best planted in.  North side, south, east or west of the house.  Need to know about sun & shade.  Also need to know which Cacti grow tall & slim & which one’s spread out.  Lots to learn & I find that kind of learning enjoyable:)) 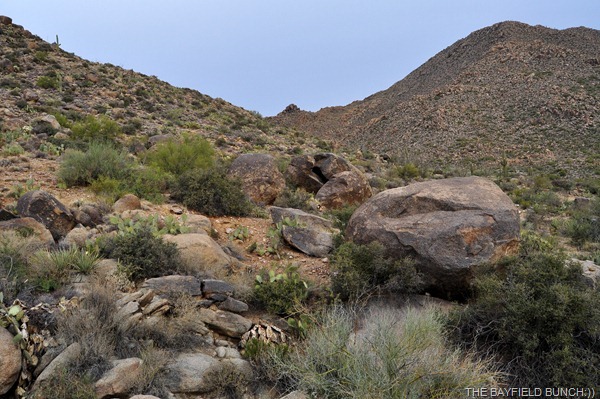 Fellow RVing Blogger Gaelyn from GEOGYPSY dropped in this afternoon.  Gaelyn spends her summers as a Park Ranger at the North Rim of the Grand Canyon & her winter’s in Yarnell just about 12 miles up the road from us atop the Weaver Mountains.  First met Gaelyn when she dropped in to see RV SUE & HER CANINE CREW boondocked at the end of Ghost Town Road last March.  When traveling, Gaelyn drives a big honkin diesel pick-up truck towing a big honkin 5th wheel.  Gaelyn’s planning on heading off to Africa for a month early next year.  This will be her second trip there. 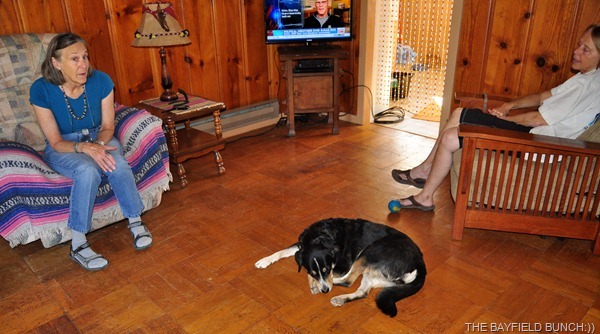 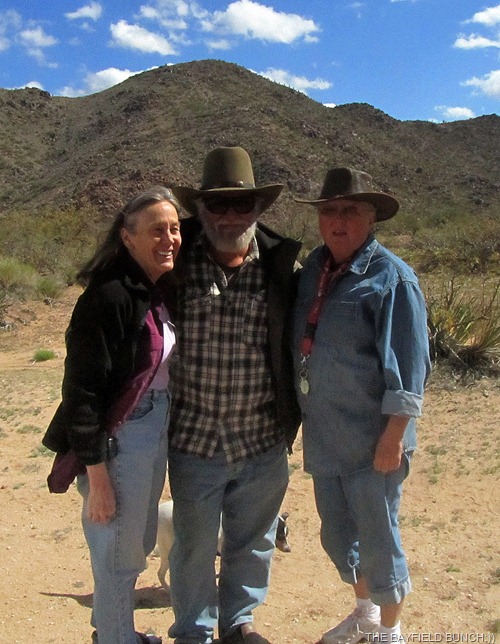 It’s not often Kelly & I eat Pizza but tonight we made an exception.  Had heard a lot about the great Pizza’s at the Congress Mercantile store on highway 89 at the south end of Congress.   Kelly phoned up & Mercantile Judy said to pick it up in half an hour.  Gotta be the best darn Pizza we have had for many, many, years.  We got it loaded so I had to spend a little time picking off all the black Olives:(( 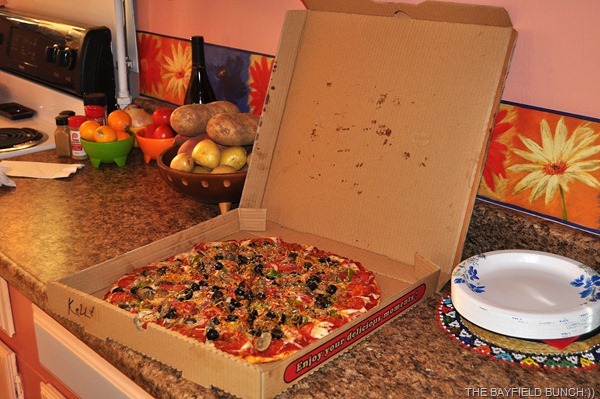 We still have not adjusted to the time zone change from Bayfield Ontario.  We can barely make it to 8 p.m. Arizona time before falling asleep.  To nights ago we were both in our jammies by 5:30 in the afternoon.  Of course we involuntarily start our days on the early side with Kelly getting up around 5 & me getting up anytime after 3 a.m.  Absolutely no reason for either one of us to be up that early, but it’s just the way our body clocks are set I guess…………….. 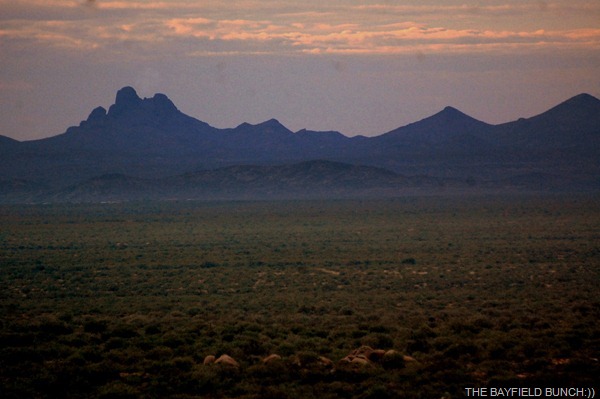 -I changed my iPod name to Titanic. It's syncing now.
-When chemists die, they barium.
-Jokes about German sausage are the wurst.
-I know a guy who's addicted to brake fluid, but he says he can stop any time.
-How does Moses make his tea? Hebrews it.
-I stayed up all night to see where the sun went. Than it dawned on me.
-This girl said she recognized me from the vegetarian club, but I'd never met herbivore.
-I'm reading a book about anti-gravity. I can't put it down.
-I did a theatrical performance about puns. It was a play on words.
-They told me I had type A blood, but it was a Type-O.