A STROLL THROUGH THE OLD CONGRESS CEMETERY 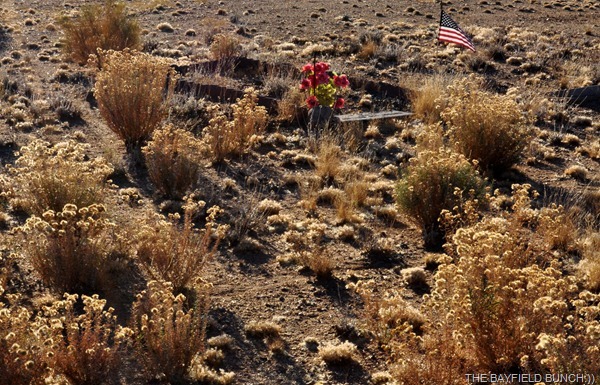 I remember the first cemetery I ever saw in the South-West.  It was somewhere in Castle Valley north-east of Moab Utah.  It was May of 92 & I remember heading south on Mountain Loop Drive watching a storm brewing in the mountains to the east.  I will never forget the lightning flashes, the dark foreboding clouds, the sheer mountain beauty, & the experience of this particular day’s drive.  From a  photography standpoint, the lighting was phenomenal.  One of my all time favorite memories.  Not sure where exactly it was but I remember spotting something on the east side of the road.  We (different traveling partner back then) stopped, turned around & went back.  Sure enough, it was a cemetery.  But a cemetery unlike any I had ever seen.  That was back in the days of 35mm film so I do not have any digital photos.  But, this morning at the Congress cemetery I was reminded of that very first one I saw in Castle Valley over 20 years ago. 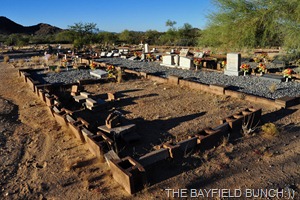 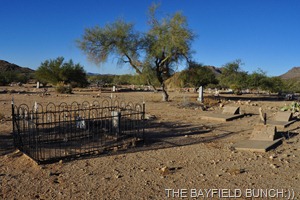 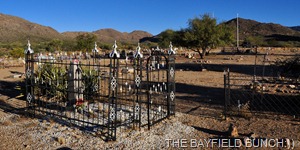 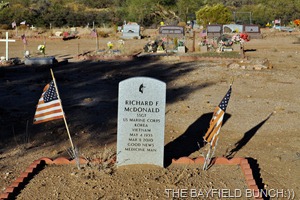 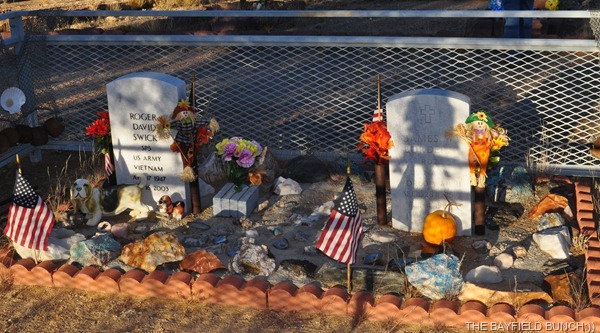 There were no manicured acres of green grass, no tall stately trees, & no great granite headstones towering silently over unwavering rows of perfectly engraved marble inscriptions.  Things are different here in the south-west, including the cemeteries.  This mornings walk through the Congress cemetery was no exception.  Rather than explaining the difference, I’ll just let the photos do that for me. 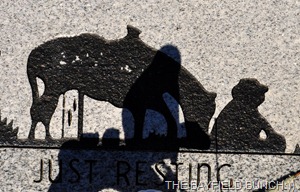 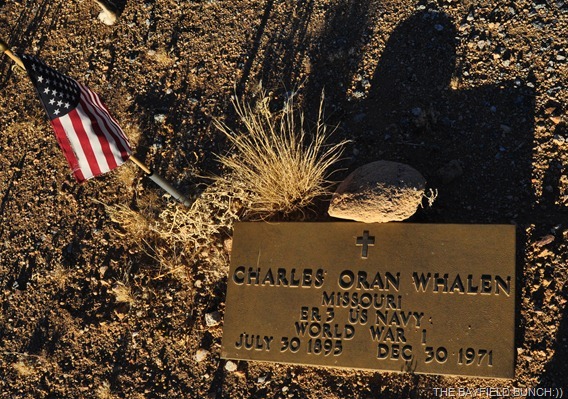 Tombstone Arizona probably has one of the most well known cemeteries anywhere.  We have been to Tombstone’s ‘Boot Hill’ but I was not impressed.  Not impressed because we have wandered through some of the real cemeteries of the southwest.  Not to say Boot Hill is not real, but it’s pretty commercialized.  To see an untouched cemetery of the old days one only has to travel a few miles from Tombstone to what’s left of the old western town of Fairbank on highway 82.  A quarter mile walk will take you to a ‘Boot Hill’ that has not been touched by man’s commercialism.  You can read about & see photos of the old Fairbanks cemetery at our site entitled… THE GHOST TOWN OF FAIRBANK. 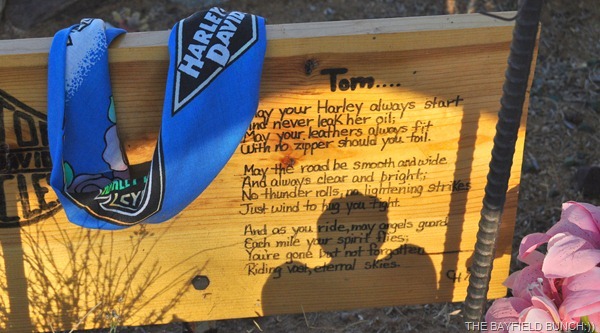 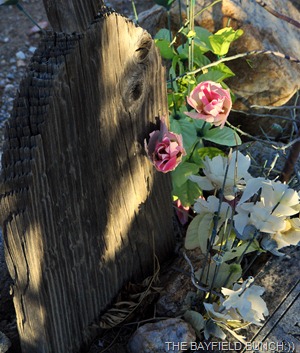 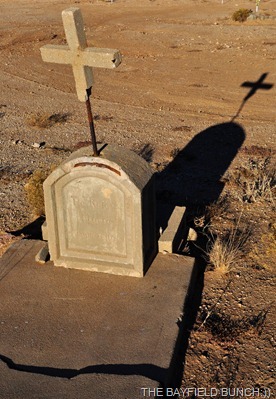 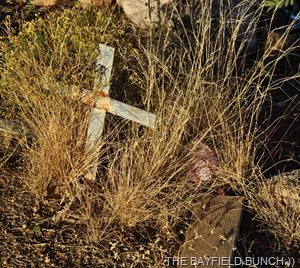 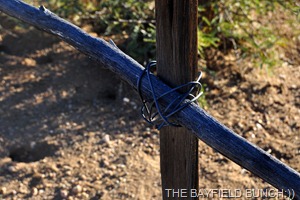 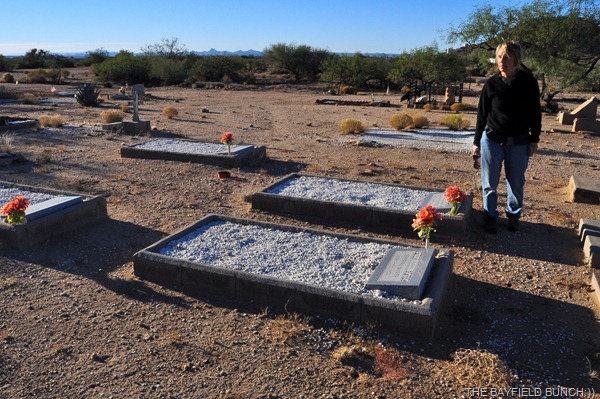 While at the cemetery this morning we scouted out a boondocking area close by.  A few rigs scattered about but we did find a nice spot for some RV Boondocker Blogging friends of ours who may arrive at the end of the week. 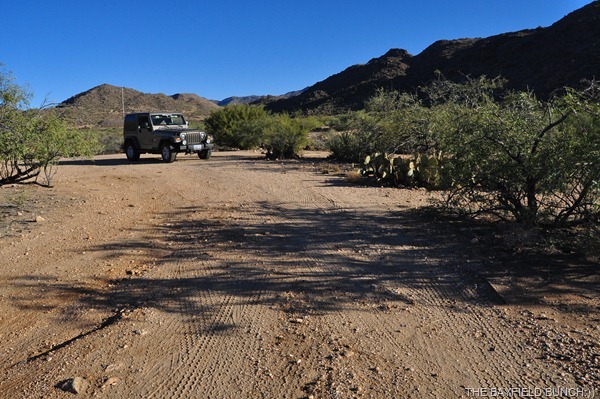 NICE ROOMY SPOT FOR AN RV 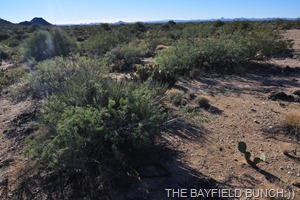 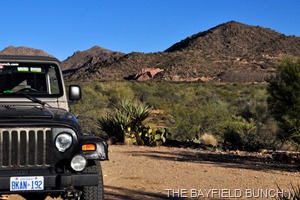 After the cemetery, we took ourselves for a little drive around the wee town of Congress. There is more here than what meets the eye for anyone passing through on highways 89 or 71.  Not a lot of touristy things here & I like that.  The town may not be of interest to some folks, but my camera generally finds something of interest for me.  I will be out & about soon with an eye looking for a few things off the beaten path.  And, a few things on as well.

In the shade of a Palo Verde tree, tipped back in my lawn chair for a few minutes this afternoon, I watched with interest as 2 fighter jets dueled it out high overhead in the clear blue Arizona sky.  Saw 2 orange flares out of one jet & then watched as the second jet rapidly gained on the first jet in a tight turn.  Another flare out of the first jet as they banked away out of sight.  I listened for another half minute as the engine sounds slowly droned away to the northwest.  I have seen this mock combat in the southwest sky many times before & I have a theory about the flares.  When one plane electronically locks it’s guns or rockets on a target & fires……the flare or flares ejected by the target plane probably signify a ‘hit’ to the pursuing plane.  Just a theory of course.  We often hear the roar of ‘dog fighting’ jets overhead.  Being a kid always fascinated with airplanes…..I like that:)) 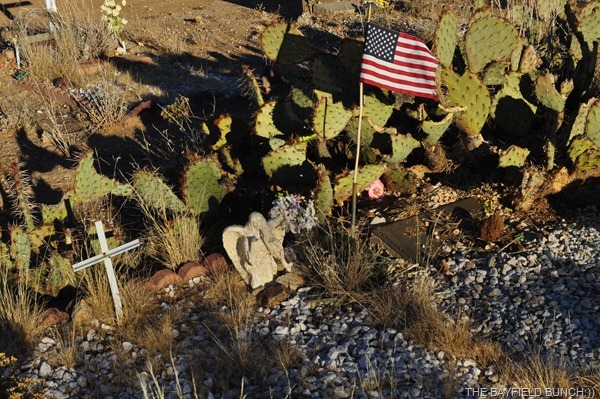 GROANER’S CORNER:((  A lady was filling her tank at a gas station, smoking a cigarette, even though all the signs say not to. The fumes that came out of the gas tank ignited, severely burning her hands.
But it also lit up her arm, too!
Instead of rolling on the ground to put it out, she panicked. She took off running down the street.
A police car was at the intersection where it happened and he tried to stop her to put out her arm, but she just kept running and screaming. All the officer could think of doing was to shoot her. This took everyone by surprise. The officer ran over to her and put the fire out, then called for an ambulance.
When questioned about his course of action to stop her, the officer said, "My only thought was to stop her. After all, she was waving a fire-arm."