Despite the obvious people noise from local business's all around us, we were both surprised at how well we slept. Especially Kelly, who can usually be woken up by a fly landing on a hamburger bun 6 blocks away. A cold night so we are very much looking forward to driving into warmer south-west temps in a couple days. Glad to be west of the Mississippi River now as well. Off with my baseball cap & on with my cowboy hat. Yahooie Louie:))

We 'un-Cracker Docked about 8 a.m. & climbed aboard I-44 minutes later. I had no intentions of driving all the way to Oklahoma City or beyond today but that's just what we did. We are presently Wally Docked in Weatherford Oklahoma about 120 miles east of Amarillo Texas.  We rolled in here about 5 o'clock this afternoon. This is the same Walmart we overnighted at on our way home from Congress 7 months ago. MapQuest tells me we traveled 502 miles today. Weather was great with a mix of sun & cloud, no wind & the roads were bare & dry. Always seems to me the traffic west of the Mississippi is not as intense as traffic east of the Mississippi.

Nice country west of St. Louis with rolling hills, rock cuts, valleys, lots of colorful Autumn forests & long winding highways. Fair number of narrow laned construction zones along the way just to keep drivers on their toes. One just north of Oklahoma City on the Turnpike sure caught my attention right quick when a red van ahead of us clipped a retaining barrier but managed to maintain control.  Construction lanes were way too narrow.  Made 3 fuel stops today because I have been keeping the weight down by not traveling on a full fuel tank.  Our Motorhome has been humming along like a fine tuned clock & I'm thankful we put all new tires on the rig a couple years ago. Two new front tires in Clinton Ontario & 4 new rear tires in Kingman Arizona 6 months later.

No route mistakes today, no missed exits or entrances. Always managed to be in the right lane at the right time moving through the heavier traffic areas. The Pilot & the Navigator were on the same page all day. It is so much easier traveling with a partner & I would be very hard pressed to go back to the days of traveling alone when I made solitary trips to both the east & west coasts of Canada. ED FREY, a lone traveler, left a comment in last night's post on just how he goes about planning his trips & doing everything himself. 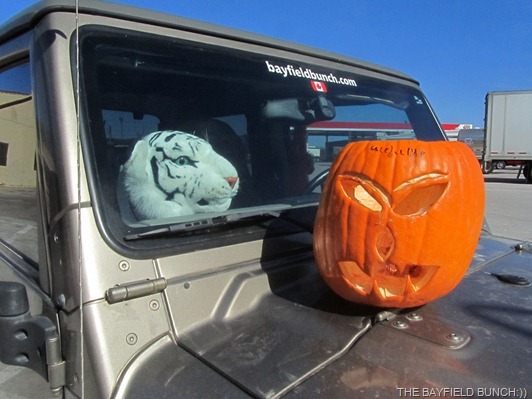 SPENCER LOOKS QUITE PUT OUT ABOUT MR. PUMPKIN HEAD SITTING ON OUR JEEPS ENGINE HOOD AT A REST STOP AREA TODAY

This trip to Congress Arizona & last Aprils trip from Congress back to Bayfield were & are different from our usual way of travel. In the past we have mainly used Interstates east of the Mississippi & side roads, secondary roads & back roads west of the Mississippi. We once totally lost ourselves in the backwoods of the Ozarks when on a whim, we swung off the Interstate east of Joplin Missouri & somehow found our way out of the woods near Fort Smith, Arkansas. That was in December of 04. On our old southern route we always preferred & enjoyed the back roads through much of Texas. I have pooh poohed Interstate travels in the past but if one decides to make the best traveling times with the shortest routes & probably the best gas mileages, then the Interstates it is.

Our Internet connection here in Weatherford was very poor so we hauled out our Wilson Sleek, plugged it in, used our metal step down stool as an antennae base & 'Walla' we had ourselves a right good blogable connection. I remember how disappointed we were in our Sleek when first trying to use it in Congress last March, but here in Weatherford tonight, our Sleek is totally slick:))

We sure are out of the loop on info about the storm on the east coast. At home we probably would have had CNN or whatever on & been keeping up with the storm updates. When we stop for the night we put our rig's antennae up & pick up half a dozen local channels. Not much coverage about the storm. While driving along today, Kelly was catching me up on storm details from her laptop. Sad to hear about the H.M.C.S. Bounty going down. 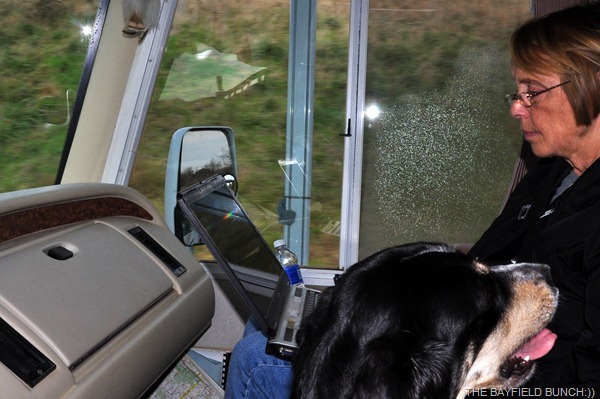 I’m not totally certain about this but I think I was aboard the Bounty when it was anchored in St. Petersburg Florida in 1965.  I have photos at home of my Mother, my Aunt Jean, & myself all standing on her deck by the large wooden steerage wheel.  And I’m pretty sure it was the one ‘Mutiny On The Bounty’ was filmed on.  I had flown to Florida after I got out of boot camp at H.M.C.S. Cornwallis near Digby, Nova Scotia.  My Aunt Jean was living in Bradenton at the time & my Mother was there visiting.  Pretty sure it was the Bounty.  When we get back to Bayfield I will post those photos.

I have had some emails coming in from folks that I intend to get back to just as soon as I can when all this traveling dust settles down. Thanks folks:))

WALLY-DOCKED IN WEATHERFORD OKLAHOMA ALONGSIDE I-40

GROANER’S CORNER:((Latest news reports advise that a cell of five terrorists has been operating in the Harlem area.
Police advised earlier today that four of the five have already been detained. The Regional Police Commissioner stated that the terrorists: Bin Sleepin, Bin Drinkin, Bin Fightin and Bin Pimpin have already been arrested on immigration issues. The police advise further that they can find no one fitting the description of the fifth cell member: Bin Workin, in the area. Police are however, confident that anyone who looks like Workin will be extremely easy to spot in the community.