HEY, ARE WE IN ARIZONA ALREADY??  … NOPE, THINK IT’S JUST A LAND FILL SITE IN INDIANAPOLIS

Because we were both tired from a long driving day Saturday, we went to bed on the early side. Only problem with that is, we were then up on the early side too. Me at 4, Pheebs at 4:01 & Kelly at 5:00. Rolled out of Cracker Barrel at 6 & continued our journey west. It was 8:20 before the sun lumbered up over the eastern horizon & lit up Indianapolis ahead, just as we were entering the east side of the city. 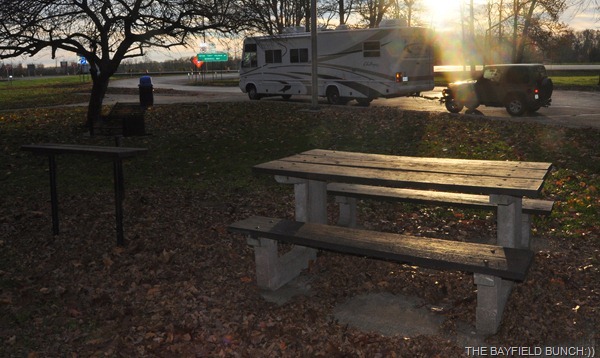 Many years ago I belonged to CAA (Canadian Automobile Association) & had them as our roadside assistance people. They provided something called Trip Tiks (route maps) that I remember using once or twice. They are fine if you stick to the route, but I seldom did. Last week, Kelly mentioned that her Mother still has a Triple A membership.  (American Automobile Association)  Gene & Frank were long time Snow Birders. Gene had mentioned to Kelly about getting us a trip tik for the shortest route to Congress Arizona. I said, 'naw, don't bother, we'll figure it out ourselves". Well, Gene went ahead & got one anyway & I'm glad she did. It is so easy following our updated route, page by page, mile by mile. Makes it a lot easier for navigator Kelly as well just glancing down at each page & telling me where the turns are coming up, etc. A bit of older technology working out kind of nice for us. In an unusual move I think we might just stick to the planned route this time..........for a change:))

Weather wise, it was a perfect driving day. Blue skies, dry roads & no wind. What a pleasant change from our previous day. Kept my eye in the rear view mirror in case Hurricane Sandy heard we were making a run for it & decided to speed up & chase after us but we crossed the Mississippi River this afternoon & I heard on the news tonight they didn't expect any problems west of the Mississippi.  What a great piece of weather luck for us to have spent last week in Spencerport & not this coming week. 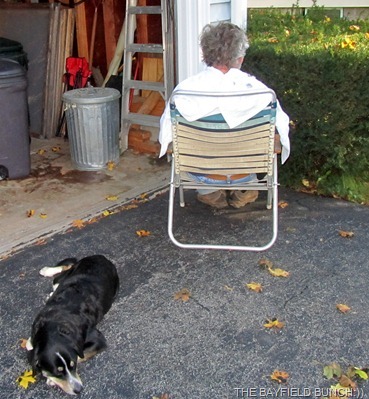 The city of Indianapolis has tangled us up a couple times in the past, so to be on the safe side this morning we did fire up our GPS system, Garmin Gertie. True to form she & Kelly masterfully talked me through the lane changes, exits, entrances & just about anything else I didn't really have a clue about. We ended up taking the southern by-pass route around the city & I must admit, I do find the audio side of our GPS system most helpful.  Kelly programs in the destinations & I, for the most part, follow Garmin Gertie’s directions.   Well, most of the time anyway.  We have had our disagreements in the past!! 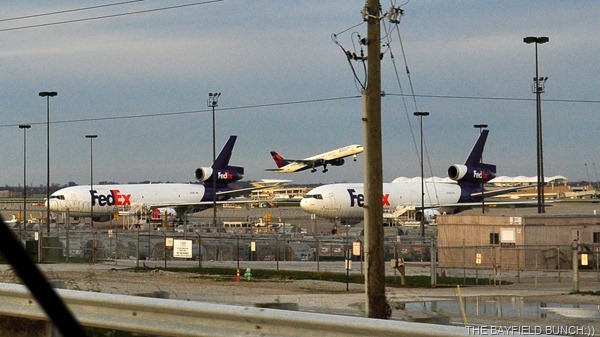 ROLLING BY THE ‘FED EX’ SECTION OF THE INDIANAPOLIS AIRPORT

With Indianapolis behind us, I set my sights on St. Louis. We have tangled with St. Louis a few times before as well so I knew it was important to get it well behind us before we stopped for the day.  Did not want to deal with St. Louis on a week day morning.  Once again we ended up taking a southern by-pass around the city.  Both the Indianapolis & St. Louis traffic was light & that was simply because it was Sunday.   Crossed the Mississippi around 2 p.m. & just kept on rolling west until we decided to stop at a Wal-Mart in Sullivan Missouri. Would you believe this Wal-Mart had low overhead beams across their entrances to prevent high clearance vehicles from entering their parking lot. That effectively blocks all truck & RV traffic so we were out of luck for picking up any groceries or staying for the night. Pooh Pooh on you Walmart.  We will just take our $1.49 grocery budget & go elsewhere…..so there!! 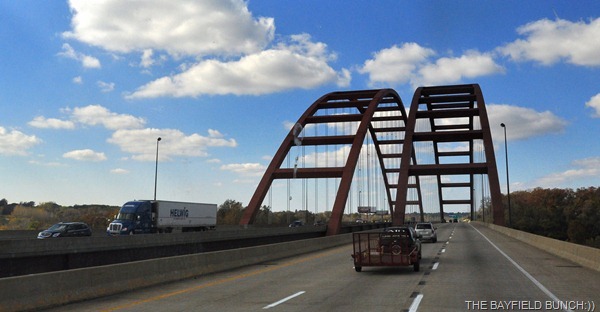 Checked out a nearby Lowes but couldn't find a level spot in the whole parking lot so it was back up onto I-44 & headed for the next exit where Kelly had searched out a Cracker Barrel. Managed to wiggle our way into a very small RV spot & that is where we are for the night. We have an all night gas bar about 50' in front of us, a drive-thru 'Lions Den' fast food joint about 30' to our left, a busy road behind us & of course a crowded Cracker Barrel to our right. Not the best spot for the night, but it will do. In DONNA'S words, I guess you could say we are 'Cracker Docked' for the night:)) 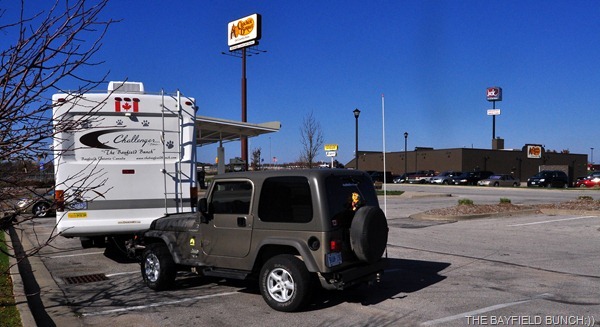 YEP, WE’RE CALLING THIS HOME FOR THE NIGHT & NO THAT IS NOT OUR AWNING OUT, IT’S THE ROOF OF THE GAS BAR IN FRONT OF US

GROANER'S CORNER:(( Here is an old Groaner's Corner from a few years ago when I used a bunch of Puns to put together some punable fun using fellow RV Bloggers at the time. I geared some of the Puns toward events happening in people’s lives.  Many of these folks are still around & some have just kind of faded away…………......
Did you know that JANNA once fell into her upholstery machine and is now completely recovered.
RETIRED ROD sent RICK some dead batteries the other day – free of charge.
DONNA is known around her town of Sandwich as quite a recycler.
Yesterday she rode her bike twice.
BIG DAWG & FREEWAY said they knew a fellow who quit dating the telephone operator because he felt disconnected. Besides, she had too many hang-ups.
WANDERING WILLY stole a calendar once. He got twelve months but emailed his friends to say, I grew herbs and worked in the jail’s kitchen where I served my thyme.
JOHN B. over in Texas stretched out in his chair & thought to himself, I'm inclined to be laid back.
THE WANDERING WISHNIES came to the conclusion that the mechanic at the local transmission shop seemed a little shifty.
MIKE & GERRI a few weeks ago said the lights were too bright at the Chinese restaurant so the manager decided to dim sum.
FROGGI DONNA brought it to our attention about a new type of broom that has come out, it is sweeping the nation.
Folks over at THE MOHO figured the ankle was an arch enemy of the heel because the heel had a sole that could neither toe the line nor keep instep.
DOUG figures the triangular computer monitor business was just a big pyramid screen.
LOREE tells us she used to do rock climbing as a youth, but was much boulder back then.
And JOHN says if you jumped off the bridge in Paris, you’d be in Seine
GYPSY dropped a big tub of margarine in the kitchen of her new Lance camper…now she has a Parkay floor.
IVAN couldn’t be on-line this afternoon because he’s on his way to visit some old girlfriends in Cuba. I hope he’s Havana good time.
LAURIE out in Sacramento says if you believe restaurants always overcook steaks, then you probably order them rarely.
WAYNE & ROBERTA knew a bowler who preferred to enter and exit his apartment via the fire escape because it was right down his alley.
JUDY says, show me a piano falling down a mineshaft and I’ll show you A-flat minor.
And RANDY said, it wasn’t school he disliked, it was just the principal of it.
Did you know JENNIFER nearly married a TV repair tech once. The reception would have been great!
ED signed up to be an organ donor; he really put his heart into it.
CHUCK & ANNEKE wondered if we had heard about the Buddhist who refused Novocain during a root canal? His goal: transcend dental medication.
SAM wanted to run an on-line origami school, but it folded.
On the track team, JERRY had a fear of hurdles, but he got over it.
SANDRA up there in cold old Canada tells us about a dog that gave birth to puppies near the road and was cited for littering.
And MIKE tells us of the two silk worms that had a race up at North Ranch. They ended up in a tie.
And KAREN said, once her & Steve were sitting in their kayak & became chilly, so they lit a fire in the craft. Unsurprisingly it sank, proving once again that you can’t have your kayak and heat it too.
And lastly, did you hear about AL who sent more than ten puns to friends, with the hope that at least one of the puns would make them laugh. No pun in ten did.