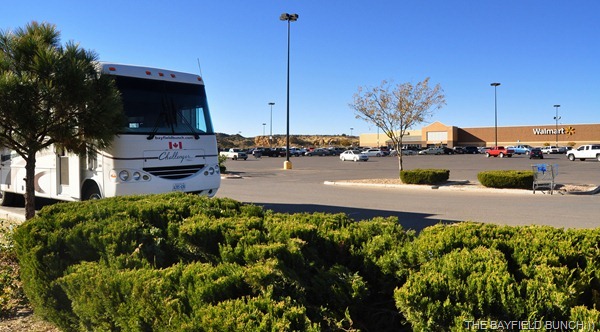 My body is having a little trouble adjusting to the time zone difference. Thinking it was 5 a.m. it conspired with my brain to wake me up at 3 in the morning. Pheebs was confused too & decided it was time for her & I to get up.  Besides, she figured it was time for a bathroom break anyway.  So, that was it.  Clock said 3:15 a.m. as we headed out the door for a walk around the moonlit camp ground. Good thing I had on my pajamas & housecoat because it was pretty nippy at that hour of the morning Spotted one of my favorite constellations in the southern hemisphere....Orion.
---

No big hurry to get rolling this morning because we did not want to land ourselves in the middle of the Albuquerque morning rush. Albuquerque is the last city of any consequence before we reach Congress. However, after deciding not to leave too early, we left early anyways. But, not before dumping our tanks....or should I say tank. For our first dump of the season we had us a good news/bad news situation. Last year in Arkansas we had a little mishap with our black tank, but this year all went well with Mr. Black. However, when I pulled the gray water tank lever......nothing happened, zero, zilch, nuttin!! The lever pull handled functioned but the inside valve did not open. Therefore, we were unable to dump our gray water this morning. Had been looking forward to getting rid of that weight. Oh well, we'll deal with that when we get to Congress. Had ourselves back on I-40 about 7:30. 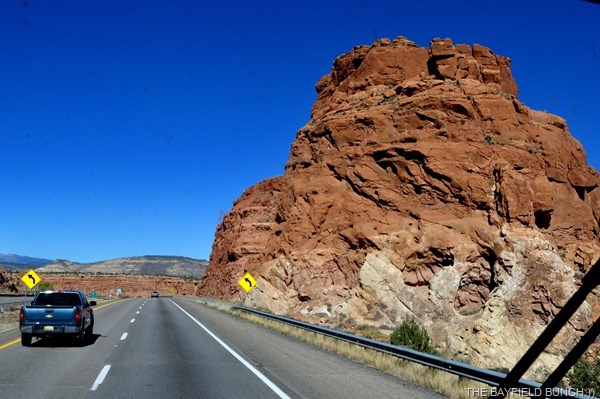 No big hurry today so I just set a comfortable speed on the cruise control, put my feet up, relaxed & sat back watching the great southwest scenery rolling by. If it hadn't been for a dozen or more hills & long grades repeatedly kicking us into overdrive I might have been able to grab myself a few winks.

---
Thanks to a reader in Shout Box I was able to correct the spelling of our 'Made In The U.S.A'. items in Tuesday's blog. Bought three colorful bowls, not bowels. I have since corrected that. I'm sure we know bowels are made in more countries besides the U.S. Of course bowls & bowels have some similarities. Both are filled & emptied on a regular basis:)) 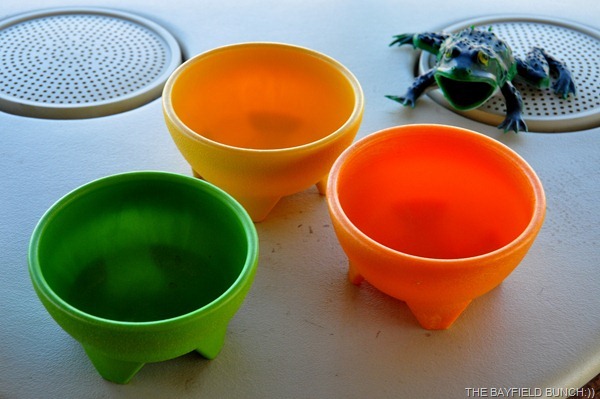 Forgot to mention, but Kelly did phone her Mother a couple days go in Spencerport NY to see how she made out with Hurricane Sandy. Aside from some wind & rain, everything was fine on Coleman Avenue although there were a few parts of town that did lose some electricity for a bit. Back home at our 5 Seasons Park in Bayfield we heard the electricity was out for over 12 hours but no damage from the wind blowing Pine trees or their limbs down.
---

Another nice advantage of a Motorhome is the freedom of moving around while driving, & especially for pets. Pheebs likes to lay between our front seats on the low profile engine cover. Sometimes she will walk back & bring up one of her squeaker toys. Kelly throws the ball down the length of the rig & Pheebs goes rumbling after it. I like how she comes & sits beside either Kelly or for some scruffles. Pretty nice way to travel, with your best Pal, or Pals, sitting right beside you:)) 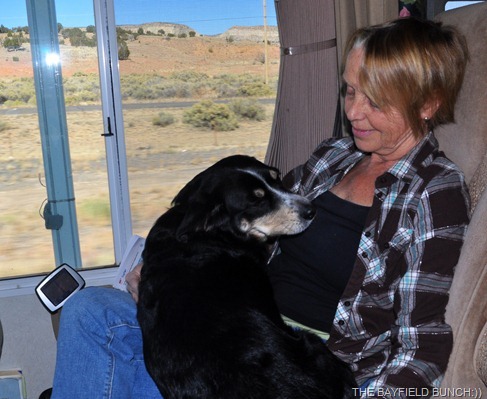 JUST A GREAT WAY TO TRAVEL

No egg salad sandwiches on this trip but I have had some other interesting things make their way forward from our mobile galley. For breakfast Tuesday morning I had a raw wiener plus a peanut butter & honey sandwich rolled up in a piece of flat bread. Chased that down with a tall cold glass of Skim milk. Now, how's that for some fine mean cuisine. Other things making themselves forward for the driver have been, yep, some more peanut butter & honey sandwiches, orange & cranberry juice, bananas, small piece of a chocolate chip cookie, & part of a scrumptious Sub. Think there were a couple hand fulls of Almonds in there somewhere too. 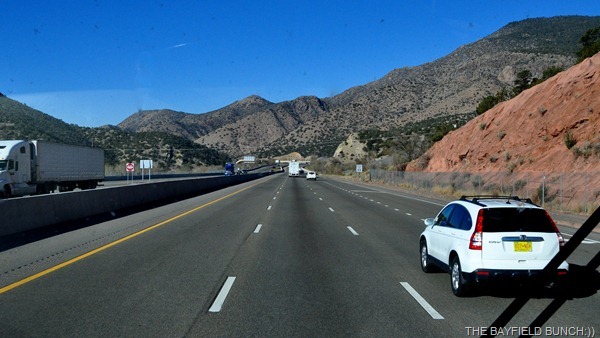 HEADING WEST THROUGH THE MOUNTAINS EAST OF ALBUQUERQUE

We rolled through Albuquerque New Mexico at the ideal week day time of 11 a.m. Now, maybe I have lived a sheltered life, but I have never seen pollution soooooo bad in a city as we saw this morning in Albuquerque. And, it was definitely pollution because I could smell it for miles & miles. I wonder if they have some big coal factories or something around there. About 5 or 10 miles west of Albuquerque we spotted a Camping World & pulled in. From Camping World we could look back down the valley to Albuquerque & it was lost in a thick low hanging cloud of pollution.

Camping world is like Mecca for RV folks. Just about anything & everything one needs for their travels including large service bays plus a parking lot full of new & used RV's.  And, this is a large Camping World. Figured we needed a new gray tank valve for sure so we picked one up. Kelly had been looking for a BBQ & we managed to snag one of them as well. The inside of our Motorhome is beginning to look like a Home Depot warehouse. 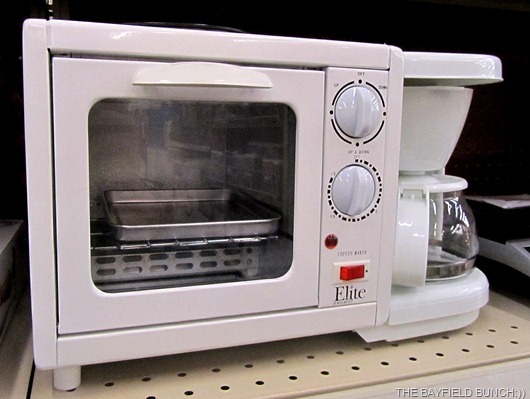 THIS LITTLE DITTY IN CAMPING WORLD CAN BREW 4 CUPS OF COFFEE, MAKE TOAST IN THE TOASTER OVEN & FRY A COUPLE EGGS ON THE GRILL ON TOP…NO, WE DID NOT BUY ONE

It was exactly 10 years ago tonight Kelly & I moved from our old country farm house near Fullarton Ontario to our place at the 5 Seasons Estates in Bayfield. It was Halloween night & it was cold, dark, & pouring rain as we rolled out of the old farm laneway for the last time with both our Dodge pick-up truck & Mazda car loaded to the rafters. Kelly drove the car while Max & I were crowded in the truck with a pile of clothes between us. Aw, the stuff memories are made of. Now, here we are 10 years to the day, about to move stuff into our Congress house Thursday sometime.  Also, this is our third Halloween night on the road. First was Ellis Kansas back in 07 & another, 3 years ago in Columbus New Mexico. And tonight, it is Gallup New Mexico:))

Because I had been awake since 3 a.m. I began to fade around 1 o'clock, so set my sites on Gallup New Mexico today. And, that is where this post is coming to you from tonight. Rolled into Gallup's Walmart parking lot about 3 p.m. & just shut er down for the day. MapQuest tells me we did a relaxed 253 miles today.  And yet, tonight, I feel like I drove a thousand miles to day:((  Probably the nosiest spot we have ever had because we are only a few hundred yards north of I-40. Oh well, it's all part of our kind of RVing & we're just fine with that. With a bit of luck, we'll be at our Congress house sometime Thursday:))))))))))) 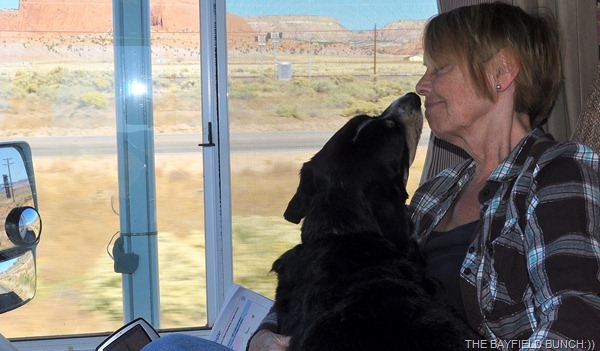 I LOVE YOU MOM

GROANER'S CORNER:(( It was visitor's day at the asylum. All the inmates were standing in the courtyard singing "Ave Maria" and singing it beautifully. Oddly, each of them was holding a red apple in one hand and tapping it rhythmically with a pencil. A visitor listened in wonderment to the performance and then approached the choir director. "I am a retired choir director," he said. "This is one of the best choirs I have ever heard." Yes, I'm very proud of them," said the director. "You should take them on tour!" said the visitor."What are they called"? "Surely that must be obvious," replied the director....."They are the Moron Tapanapple Choir."