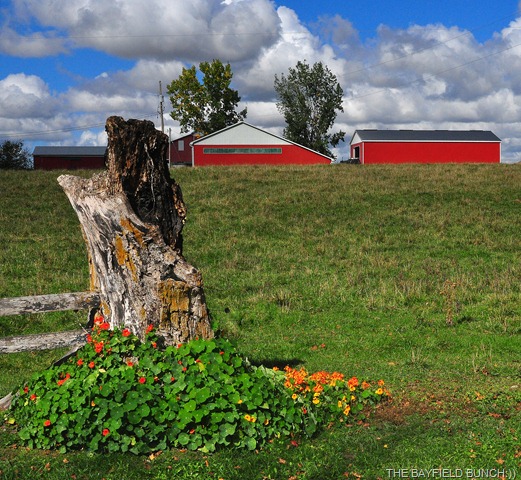 We didn't let a lite sprinkling of rain keep us from our morning walk. No wind & slightly warmer temps made for a pleasant trek in the forest. Caught a fleeting glimpse of two Deer on the trail ahead. Remained overcast for half the day & then turned into a full blown perfect sunny Autumn afternoon. 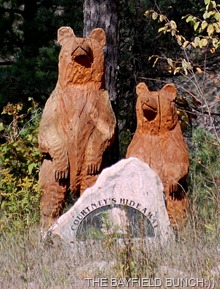 EVEN SAW SOME BEARS & HORSES IN RECENT TRAVELS
Pheebs & I did make a quick grocery run to Goderich for the usual few necessity's of life. Cranberry juice, Ginger Ale, Yogurt, Bananas, & Peanut Butter. Split us a roast beef sandwich with lettuce from the Deli. We were quick to pull the pickles out of it. 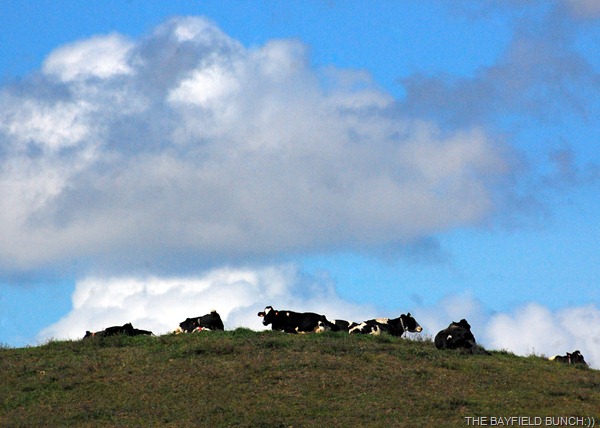 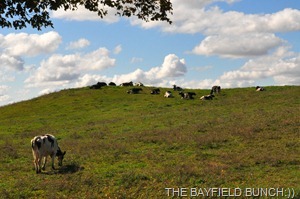 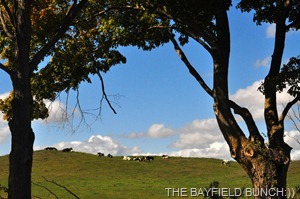 Kelly was able to dig up some info on the green house & property photo in Monday's blog we like. Kind of a good new-bad news scenario. Good news is that yes, it can be bought:)) Bad news is that it comes with 70 acres of land for a whopping $459,000:(( End of green house story!! 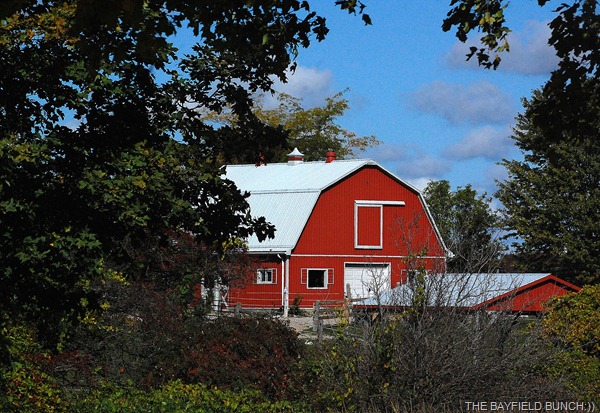 And tonight we welcome a new Blog Follower.  MARTHA PEREZ, MARTHA BARRIERA joins us for our upcoming south-west travels. Welcome aboard Martha:)) 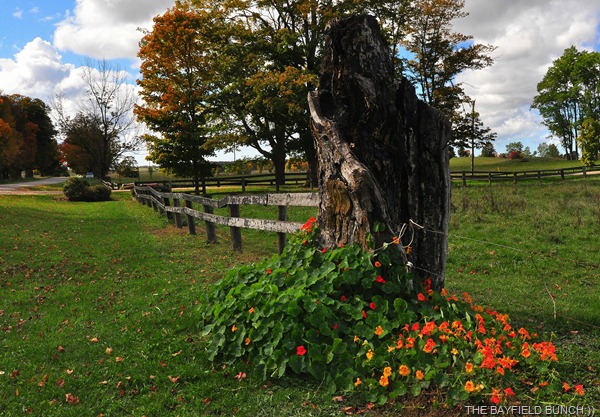 And, thanks once again to readers for sending in the nice emails.  You are all an inspiration:))

GROANER'S CORNER:(( And the Lord spoke to Noah: ''In six months I'm going to make it rain until the whole earth is covered with water and all the evil people are destroyed. But I want to save a few good people, and two of every kind of living thing on the planet. I am ordering you to build Me an Ark.''
And in a flash of lightning He delivered the specifications for an Ark.

''Okay," said Noah, trembling in fear and fumbling with the blueprints.

''Six months, and it starts to rain,'' thundered the Lord. ''You'd better have my Ark completed, or learn how to swim for a very long time.''
And six months passed. The skies began to cloud up and rain began to fall. The Lord saw that Noah was sitting in his front yard, weeping. And there was no Ark.
''Noah," shouted the Lord, "where is my Ark?'' A lightning bolt crashed into the ground next to Noah, for emphasis.
''Lord, please forgive me," begged Noah. "I did my best, but there were big problems. First I had to get a building permit for the Ark construction project, and your plans didn't meet code. So I had to hire an engineer to redraw the plans. Then I got into a big fight over whether or not the Ark needed a fire sprinkler system. My neighbors objected claiming I was violating zoning by building the Ark in my front yard, so I had to get a variance from the city planning commission.

Then I had a big problem getting enough wood for the Ark because there was a ban on cutting trees to save the spotted owl. Then the carpenters formed a union and went out on strike. I had to negotiate a settlement with the National Labor Relations Board before anyone would pick up a saw or a hammer. Now we got 16 carpenters going on the boat, and still no owls.

Then I started gathering up the animals, and got sued by an animal rights group. They objected to me taking only two of each kind. Just when I got the suit dismissed, EPA notified me that I couldn't complete the Ark without filing an environmental impact statement on your proposed flood.

Then the Army Corps of Engineers wanted a map of the proposed new flood plain. I sent them a globe. And the IRS has seized all my assets claiming I'm trying to avoid paying taxes by leaving the country, and I just got a notice from the state about owing some kind of use tax. I really don't think I can finish your Ark for at least another five years,'' Noah wailed.

The sky began to clear. The sun began to shine. A rainbow arched across the sky. Noah looked up and smiled.
''You mean you're not going to destroy the earth?'' Noah asked, hopefully.
''Wrong!'' thundered the Lord. ''But being Lord of the Universe has its advantages. I fully intend to smite the earth, but with something far worse than a flood. Something man invented himself.''
''What's that?'' asked Noah. There was a long pause, and then the Lord spoke: