A WARMLY BEAUTIFUL AUTUMN DAY FINDS US AT THE CEMETERY 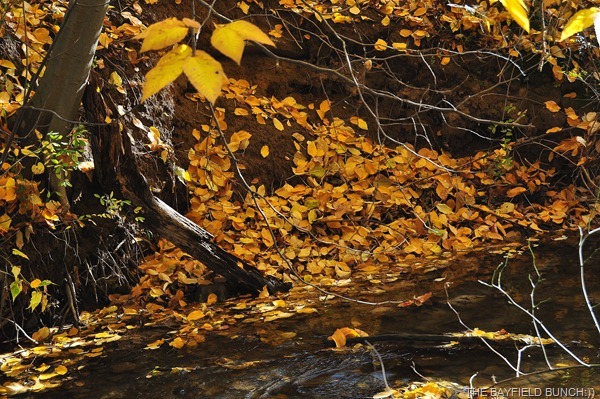 We sure hit a bonus weather day here in northwestern New York. Bright sunny day with temperatures up to the 80 degree mark. Supposed to continue for Friday as well & then the whole weather pattern goes right into the dumpster for Saturday & all next week. Wind, rain, & cold temperatures. For sure we will be hightailing it west first thing Saturday morning.

With the threat of Hurricane Sandy possibly turning inland shortly we have pretty well decided to abandon our southerly route down I-81 to Knoxville. We want to put some miles behind us & the bad weather fronts moving in. Also decided it would be better to just get ourselves on down to Arizona the shortest route possible. With our heavier load eating up extra fuel it just makes for some good sense to do that. 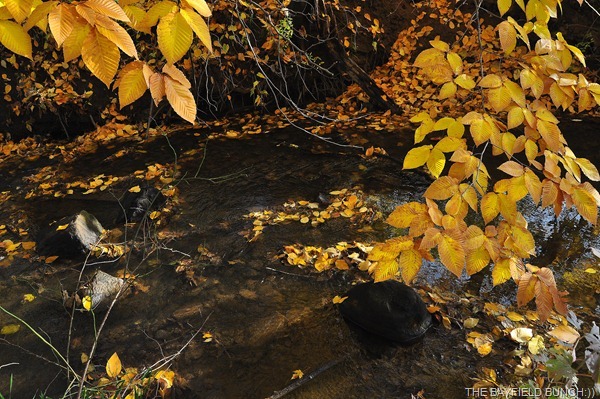 Beautiful morning for a drive.  Kelly, her Mom & I drove a few blocks over to the Spencerport cemetery where Kelly's Dad, Frank is buried. Nice old cemetery with a section of Civil War dead buried there as well. I always find cemeteries very quiet, peaceful, & interesting places. This cemetery looked especially nice today with all it's tall stately trees adorned in their fiery Autumn colors. Truly a tranquil final resting place for Kelly’s Dad, Frank. 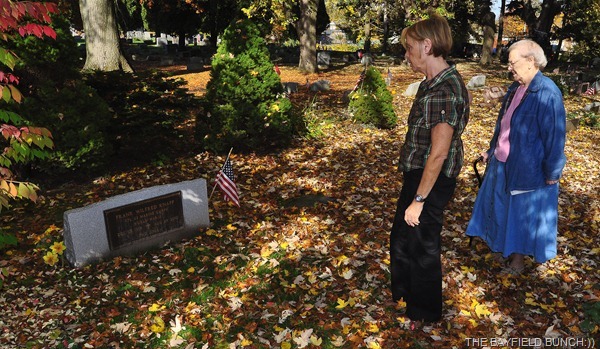 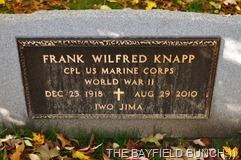 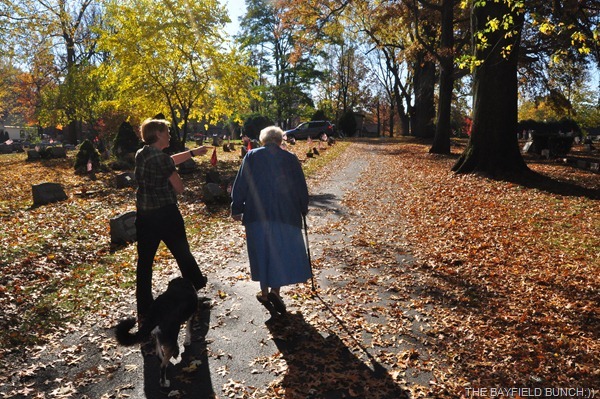 Frank died in August of 2010.  He had worked for the United States Postal Service for 33 years after returning home after the Second World War.  Frank was in the Marine Corp & was wounded in the Island fighting on Iwo Jima. 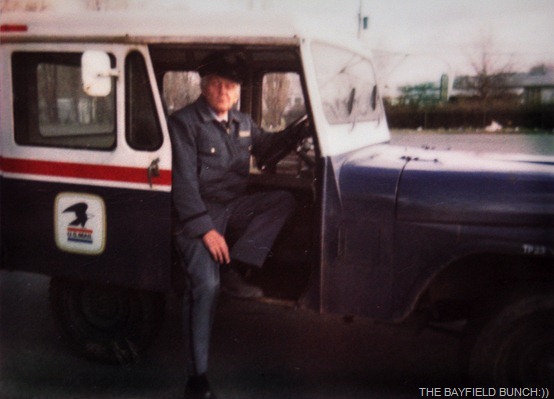 FRANK DELIVERED A LOT OF MAIL IN THIS LITTLE JEEP 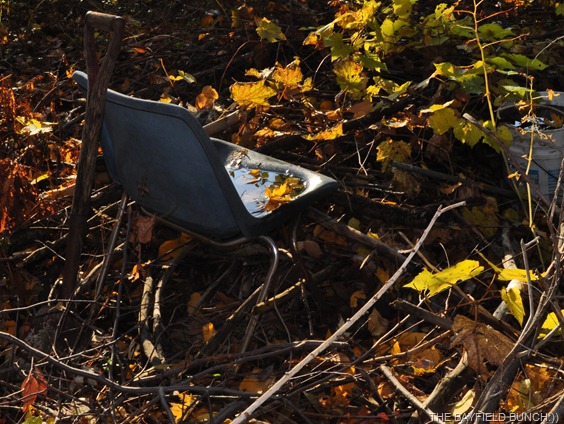 There are a couple of Hell’s Angel bikers buried nearby & Gene said, years ago on the anniversaries of the deaths, her & Frank would drive over to an intersection near the cemetery & watch the endless parade of Hell’s Angel motorcycles heading into the cemetery.  She said they still come to play cards on the graves of the two fallen bikers. 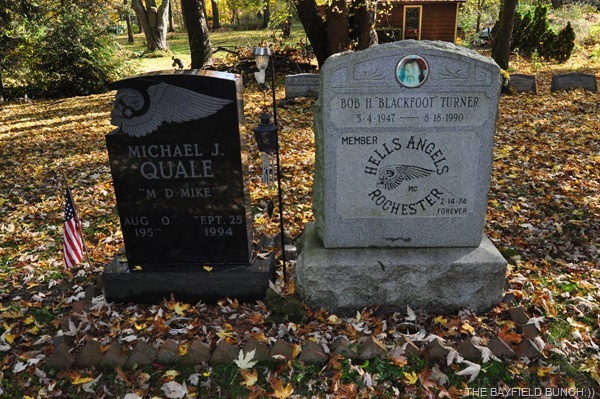 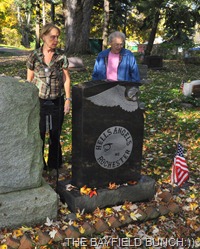 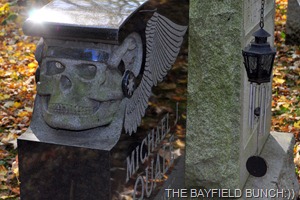 A short drive through the picturesque surrounding area to look at some colorful leaves & we were back to Coleman Avenue. Right from the first time I was here years ago I was, & still am, reminded of small town America. These streets & houses here on Coleman Avenue are right out of the television shows I watched many years ago. Leave It To Beaver, My Three Sons, Father Knows Best, Dennis the Menace, Ozzie & Harriet, and with all the Halloween decorations right now.....The Munsters:)) 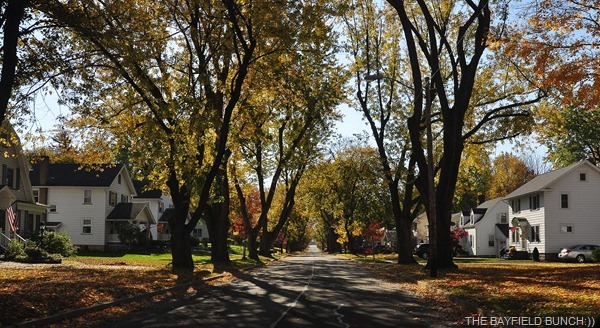 Gene, Kelly's Mom had a hair appointment at 1 p.m. so Kelly drove her downtown for that. Didn't take long for Pheebs & I to pile into the Jeep & head for Tim Hortons. And again, only a few blocks from where we are. Had never seen a Tim Hortons like this before so I wanted to get a picture of it. Pheebs wanted to split a BLT & I figured I might as well have a rare afternoon coffee while there. Besides, probably the last Tim's for the next 6 months. 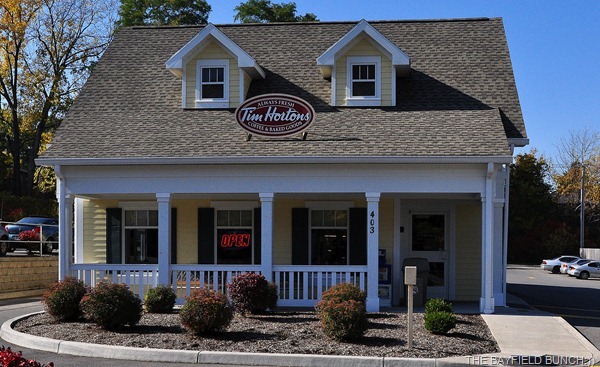 Will be so glad when all this election stuff is over. The local attack ads on television here are numerous, extremely annoying, & brutal. Candidates just tearing each other to shreds. Has the need for power & greed become that great. Has it become all that encompassing. Has no one ever heard the term, 'defamation of character'. Are the words libel & slander now meaningless in this new age of gut ripping politics. I don't know what the answer is, but there is something very, very, wrong somewhere here in our North American political system whether it be Canada or the United States. Something, somehow needs to change & the senseless bickering & fighting between people has to some how………….. stop!! 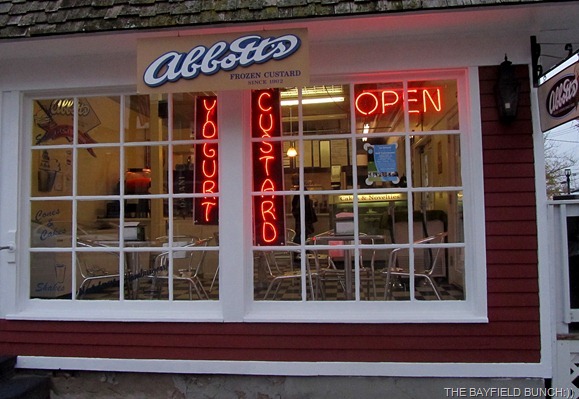 YEP, THAT’S KELLY BELLIED UP TO THE COUNTER IN THERE AGAIN

Tried out a few critter configurations in the Jeep this afternoon to see how the gang will ride when we are traveling.  Spencer fit in just fine with Molly the Monkey & Flopper the Frog.  I think between the 3 of them they will be a real deterrent to any would-be robbers & thieves along the way:)) 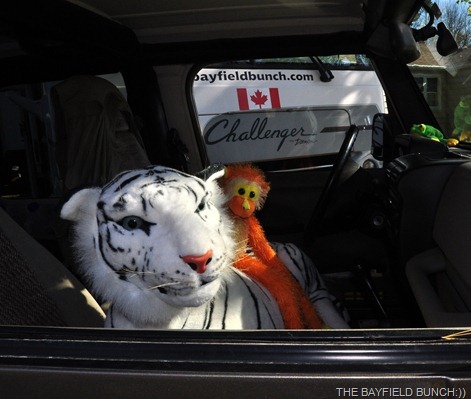 SPENCER, MOLLY, & FLOPPER THE FROG OVER IN THE CORNER
GROANER’S CORNER:((  An optimist is someone who goes after Moby Dick in a rowboat and takes the tartar sauce with him.