AND, THAT’S HOW WE STARTED OUR DAY:)) 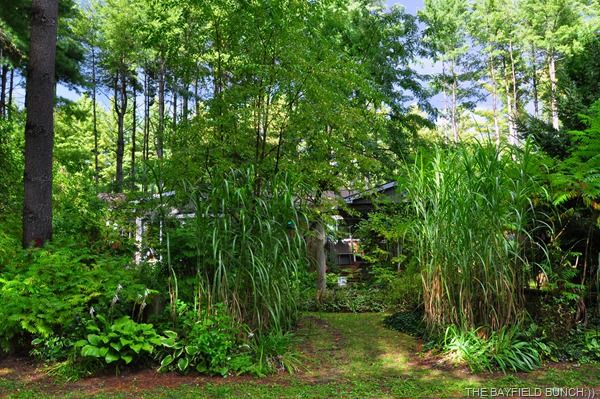 OUR FRONT YARD…WE ACTUALLY LIVE IN THERE SOMEWHERE 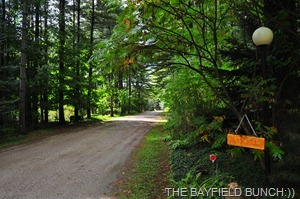 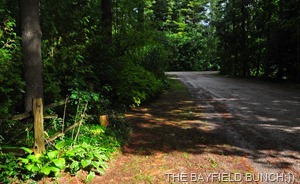 Pheebs obviously forgot Guinness was here. We got up about 4:30 a.m. & Pheebs jumped down off my bed & trotted out to the living room. Seconds later she came racing back down the hall a hundred miles an hour, tail wagging fiercely, shouting. "Dad Dad, Guinness is here, Yaaaaaaay".  Within minutes the two of them were rolling around on the living room floor wrestling, with me trying to quiet them down so they didn’t wake up the Boss.  And, that is how we started our day:))))))) 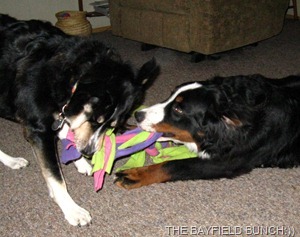 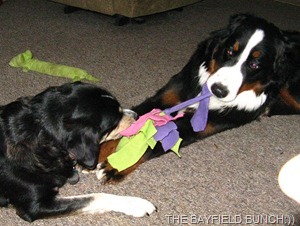 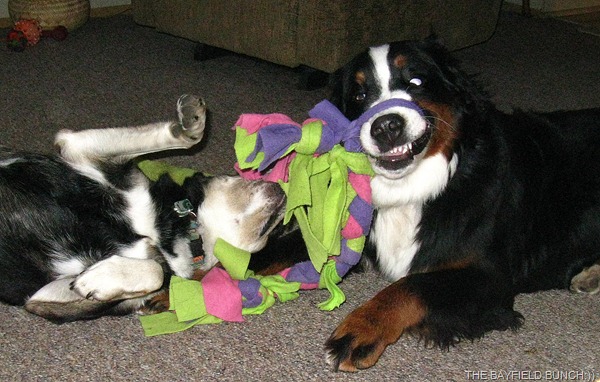 ALL TANGLED UP IN A PLAY TOY ABOUT 4:45 A.M. THIS MORNING…I THINK GUINNESS NEEDS HIS MORNING COFFEE

Guinness is a well behaved dog & is no problem to walk him off leash along the trail. He stays close & comes when called.  He has an easy going personality like Pheebs, never growls or gets upset about anything.  Oh how I wish I was a dog.   We did have to steer Guinness clear of the Park's pond though or he would have been right in there splashing around like a baby Rhinosaucerus. The two Amigos, EL Goofy-O & EL Crazy-O had a blast tearing up & down the Pine forest trail & by the time we got home they had all but worn themselves out. 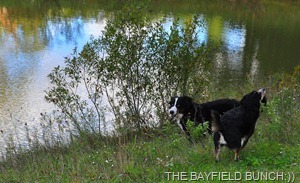 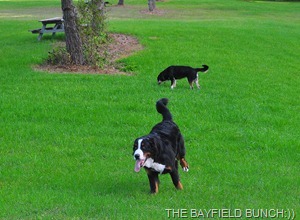 Kelly was off to work around 9:30 & I hung out in the back yard with the 8 Paw Wrecking Crew. It was a mighty fine weather morning & I was able to re-locate a bunch of ground cover. Took the pump out of our front yard frog pond this morning as well. All & all a good day as I thoroughly enjoyed spending time with the two fully re-charged & energetic doggy guys. So what if a few shrubs & flowers get trampled here & there, it's well worth it when one gets to spend time with best friends:)) 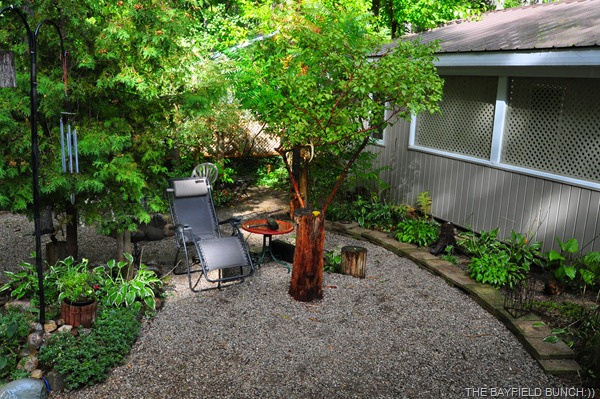 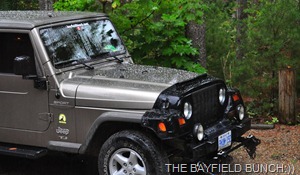 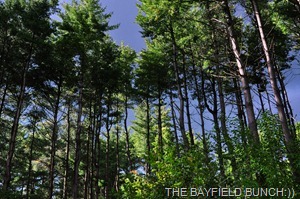 Was kind of strange this afternoon about 3 p.m. when Kelly phoned from work to see how things were going & I told her it was hailing at the moment. Said she was standing outside on her cell phone in bright sunshine.....& she was only about a mile away. Checked the live weather radar for our area & could see many small pockets of rain coming in across the lake.  We ended up with about a half dozen hail showers rolling through the neighborhood. Turned the furnace on to get warmed up a bit. Of course I was warmed up every time I sat down in my recliner because Pheebs was instantly on my lap with Guinness trying his best to get up on my lap as well. He could get his front half up with big paws & head on my chest but couldn't get the second half up. It's cute to see the playful rivalry between the two of them vying for attention. 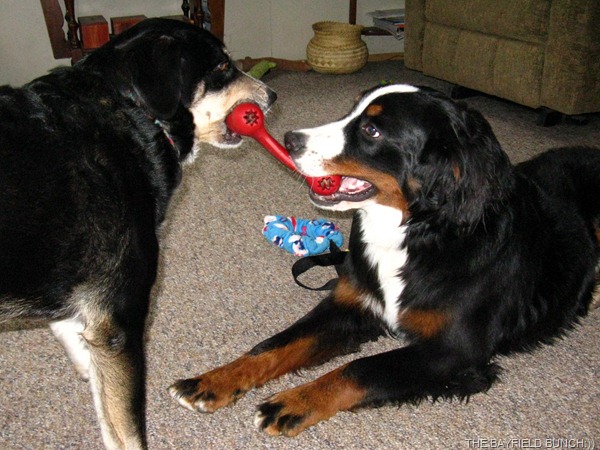 Guinness's Mom texted from Toronto around supper time to say she & doggy girl Stella wouldn’t be returning to Bayfield until Monday morning.  Yaaaaaaay, Guinness gets to spend another night with the Bayfield Bunch:)))))))))))) 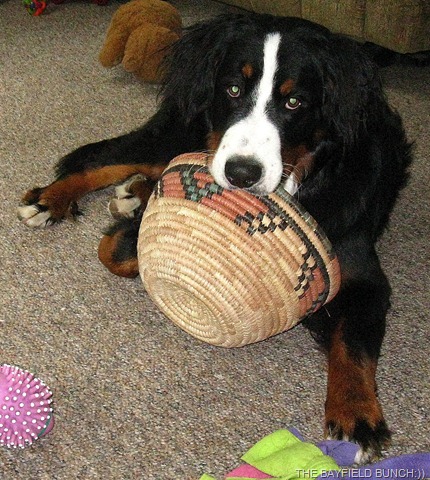 -What do you get when you cross a dog with a phone?

-Why did the dog carry a clock?

He wanted to be a watch dog!

-What kind of dog does a mad scientist have?

-What is more amazing than a talking dog?

-What kind of dog does Dracula have?

-In a veterinarian's waiting room: "Be back in 5 minutes. Sit Stay"

-What do you get when you cross a small dog and a large boat?
a Ship Tzu

-What breed of dog loves to take a bath?

-BICYCLES: Two-wheeled exercise machines, invented for dogs to control body fat. To get maximum aerobic benefit, you must hide behind a bush and dash out, bark loudly and run alongside for a few yards. The person then swerves and falls into the bushes, and you briskly prance away.