REMEMBERING A ROUGH NIGHT AT THE GRAND CANYON 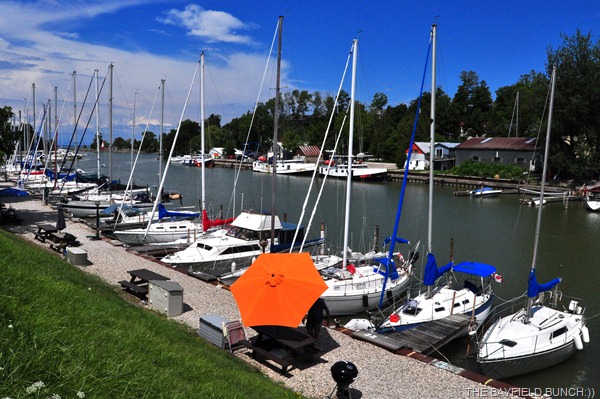 SUMMER IS ALWAYS A BUSY MONTH IN BAYFIELD’S HARBOR

Had it in my mind to head off this morning for a drive in the country but just never got the plan pulled together. Gray overcast skies with the threat of rain hung around all morning & by the time we blossomed into a bright sunny afternoon my ambition had waned. Did manage to tackle an inside job that I had been putting off for quite awhile though. Years ago, hooking up stereos, amps, TV's, tape decks, equalizers etc was something I did not have a big problem doing.  But, something changed somewhere & with the advent of DVD players, CD decks, cable boxes, MTO's, ATV's, HBO's & whatever other electronic gizmo's came down the electronic pipe, the only wires that became frazzled & confused over time were in my head. 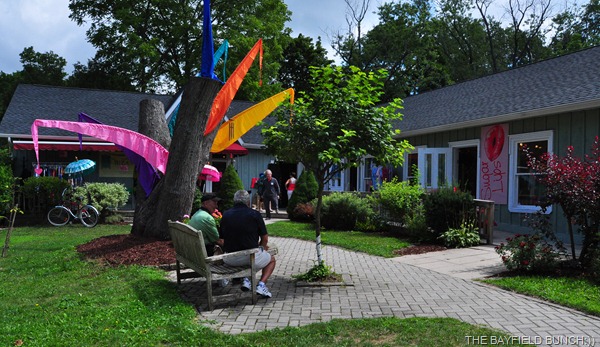 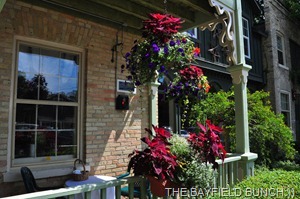 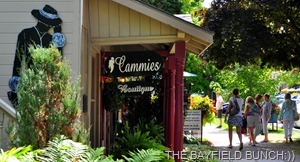 The huge mass of wires behind our television, cable box, DVD player, amp & television just left me standing there with a blank look on my face this morning but I knew if I wanted to make some necessary changes to our system I would have to do it myself. Actually, it was just the cable box I was wanting to move higher making it more accessible for the remote. If nothing else, the whole area in the corner behind the television was needing a major clean up anyway. Out came the vacuum, a bucket of water & a sponge. Finished that little job up with a nice feeling of accomplishment. Now, to unplug some wires!! 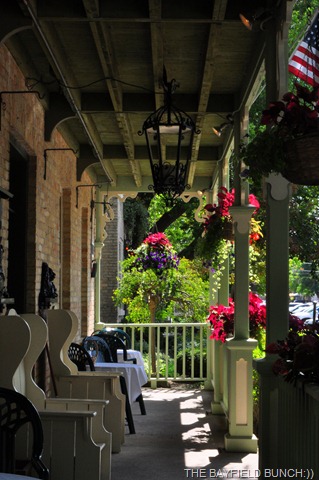 Normally I would just unplug the cables from the back of the box, move it to where I wanted it & plug the cables back in. Key word there was 'normally'. Besides my age giving me more aching muscles & joints than I really need, it has also given me a couple of smarts. And, one of those smarts told me to draw a diagram of where the wires & cables were plugged into the cable box. Sat on the floor & sketched me out some schematics. Ten minutes later I had the television elevated & the box moved to it's new location underneath. Thanks to my drawing I able to get all the right cables in the right holes & the job was done. Cranked up the system & everything worked perfectly. Ahhhhh, another sense of accomplishment. Minutes later I rewarded myself with a peanut butter & honey sandwich before stretching out for a well deserved afternoon snooze in my recliner. 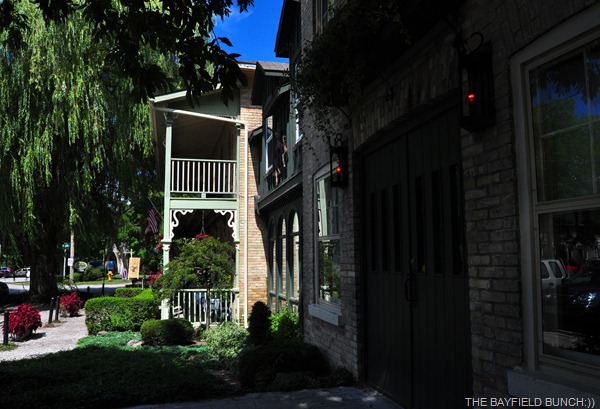 THE GOOD LUCK DUCK has some nice photos from the south rim of the Grand Canyon & it's a place I hope we can return to some day. Our very first visit there was just not the best experience we've ever had.  A second visit a couple days later was a bit disappointing as well, but not because of the Canyon………it was the hordes of people!!  On that second daytime visit there were just waaaaay to many people milling about everywhere for us to enjoy the spectacular splendor & magic that lay before us. 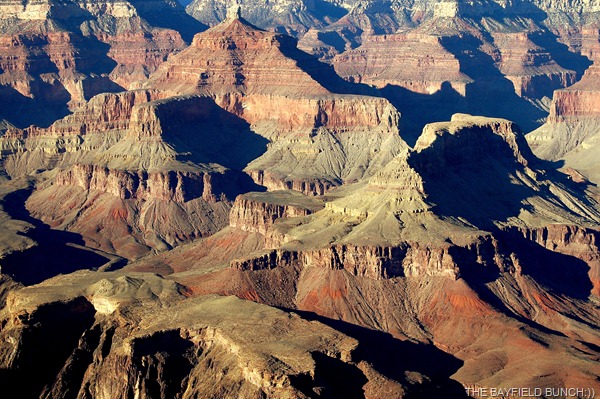 A few years back we left Kanab Az one morning heading for the south rim of the Grand Canyon. Didn't know we had a rough RVing night ahead of us!! Our day was fine but we made the mistake of arriving at the east gate of the Canyon way too late in the day. It was late in the month of November 2007 & we hadn't taken into consideration the low angle of the setting sun, & we were headed right into it. 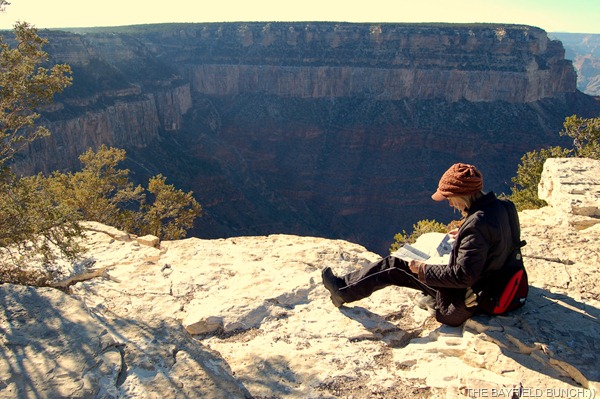 As I remember it, highway 89 runs fairly straight & level all the way South from Page Arizona to Cameron where we turned west & headed into the Grand Canyon National Park. It was getting late in the day & as the sun began to dip to-wards the horizon, visibility became more of a challenge. Rolled up to the Parks east gate around 5 & with the Forest Ranger's words, "the campgrounds all filled up" our day began to rapidly deteriorate. Never occurred to us to make reservations. We proceeded into the Park but had a very difficult time on the confusing roads because of the blinding sun in our eyes. Didn't take us long to become totally disoriented & completely lost. 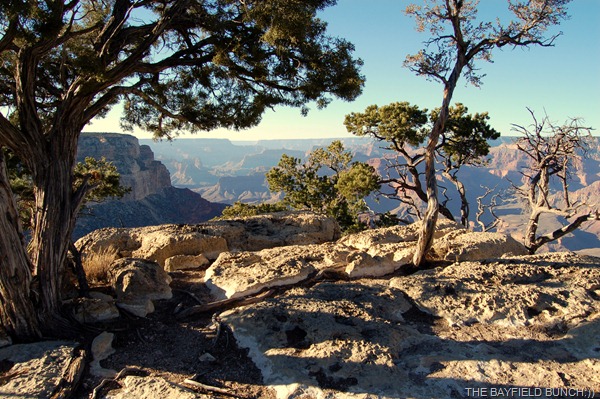 The South Rim of the Grand Canyon is much larger than I had imagined & with the sun in our faces we missed important turning signs & campground directions. After about a half hour's frustrating drive we blew right out the Park's south gate before we even knew it. Found a spot to turn around & re-entered the Park, asked for new directions, & promptly got lost all over again. It just seemed to be a maze of roads choked with cars, campers, & people scurrying every which a way. We were looking for the Mather campground where the Ranger guy thought there might be some primitive (no electric) camping sites left. You can only imagine how tired & frustrated we were by now. By the time we found the camping area we were about ready to turn around & go back to Canada. 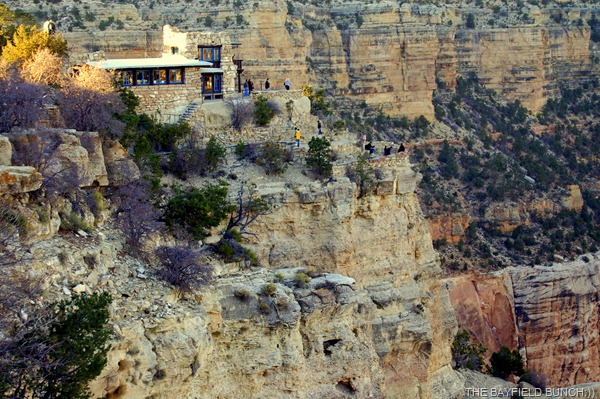 Took a drive through the campsites with electricity on the off chance we might find a vacancy but the place was jammed wall to wall & tree to tree with RV's packed in every which a way like sardines. It was obvious to us the biggest mistake we had made was failing to know that this was the big American Thanksgiving long week-end & everybody's brother & uncle had flocked to the Grand Canyon to spend their Thanksgiving there in the beautiful weather. I think all the large cities in the west had dumped their entire populations into the Grand Canyon's south rim that weekend. We somehow located the other camping area without electricity & had to un-hook the car before entering because we could see it was going to be a tight squeeze on the narrow roads. And to make matters worse, night had fallen & it was dark as the ace of Spades!! 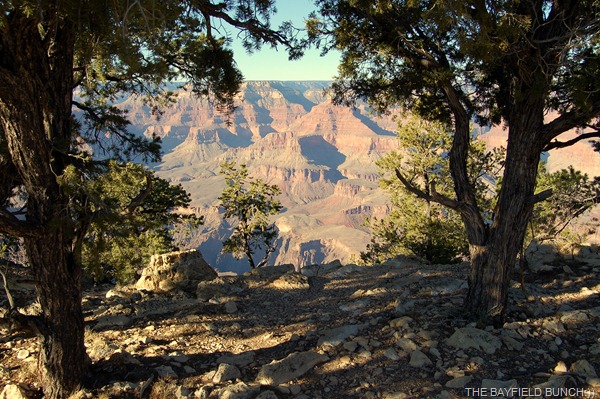 I drove the motorhome & Kelly followed in the car as we squeaked into a narrow uneven campsite. Well, we assumed it was a campsite, but who knows. Activated the automatic levelling system & tried putting the hydraulic jacks down to level the coach but I didn't think they sounded right. Meanwhile Kelly had spotted what she thought was a better spot just up the road so I reluctantly retracted the jacks & backed out of the tight spot & pulled into the other spot. Still very uneven & not much better than where we had been. Put on the emergency brake, & flicked the switch for the hydraulic jacks & .........nothing happened!! The system never activated & was totally dead...no power to the jacks. That lead to a second problem because now we were unable to level the coach which meant we could not take the chance of putting our two slides out because at that off angle we were afraid our larger living room slide might not re-tract again & that would have left us in a real pickle. Of course by this time, after a long drive from Kanab I am a totally stressed out wreck. Kelly is trying her best to hold things to-gether & even the little doggy guys were all buzzed out. They looked like they had all stuck their little paws into a light socket. I looked & felt even worse:(( 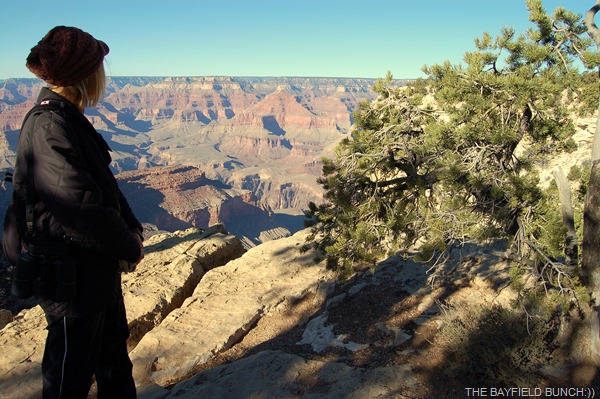 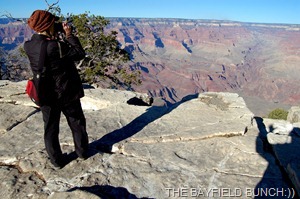 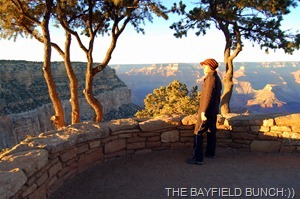 Temperatures had rapidly dropped to below the freezing mark so we got the furnace going on battery power. Lit some candles because I didn't want to use the lights & run the risk of further draining the battery. Didn't sound like the furnace was running right & we didn't want to kill our battery so we turned if off. These were the days before we had solar power. Here we were at one of the world's most beautiful places & we hadn't even seen it because we knew that we had to pull out at first light & head the 75 miles to Flagstaff Arizona in hopes of finding a garage open before the week-end. Needed someone to figure out what had gone wrong with our hydraulic jacks.  Kelly made a few phone calls & found a place to look at it. Needless to say, with the slides in, 3 restless dogs, 2 very stressed out people, furnace not on plus the rig tilted at an angle with an unknown leveller problem, it was a very miserable night...........to say the least. 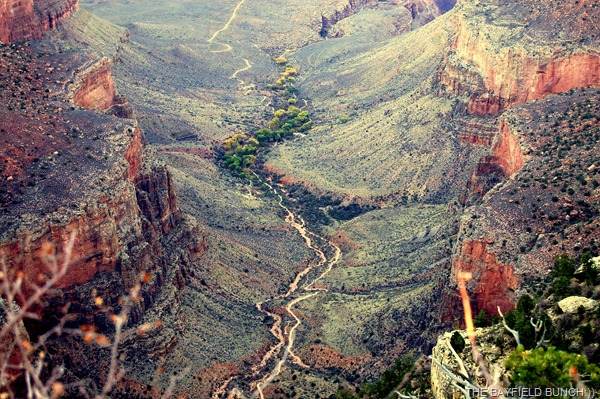 We were up long before the sun & straggled our way out of the campground heading south with our dash heater on full blast trying to thaw out. It was a pretty quiet drive to Flagstaff that morning with nobody saying much, not even the dogs. We did get the leveller problem solved & later spent the rest of the day & next night totally vegged out at a KOA near Williams Az before heading back towards the Grand Canyon again. Found a run down Freddy Flintstone RV Park along the way & made that our base for visiting the Canyon over the next few days. I'm sure we would have enjoyed the Grand Canyon more if it had not been jammed with soooooo many people. It definitely warrants a return visit some day........if & when there are not so many people all over the place!! 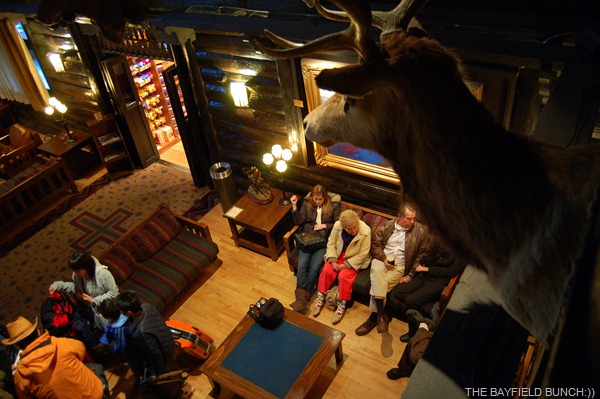 GROANER'S CORNER:(( Two cannibals are eating a clown. One turns to the other & asks: 'Does this taste funny to you?