REMEMBERING A DAY OF FRAZZLED NERVES IN QUARTZSITE ARIZONA 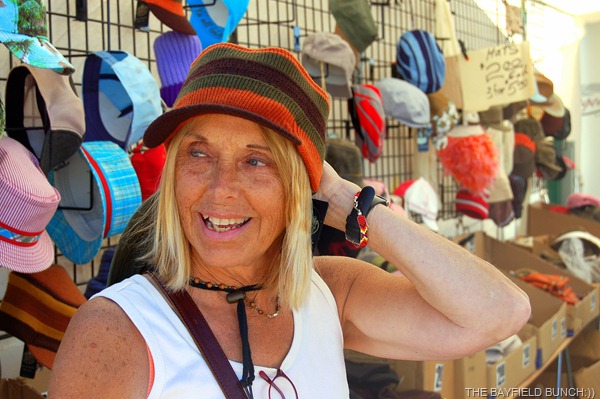 It was one year ago yesterday (Tuesday) that a devastating Tornado roared in off Lake Huron just 12 miles north of us & devastated the town of Goderich Ontario with the loss of one life, 37 injured & 300 buildings damaged. I remember how dark it became that Sunday afternoon but had no idea what was taking place on the shores of Lake Huron just a short distance away. I am still a bit disoriented sometimes when I go to Goderich now because it looks so different with all of the large trees gone in the downtown area & large gaping holes where buildings once stood. Work is still ongoing daily to repair & rebuild the town. 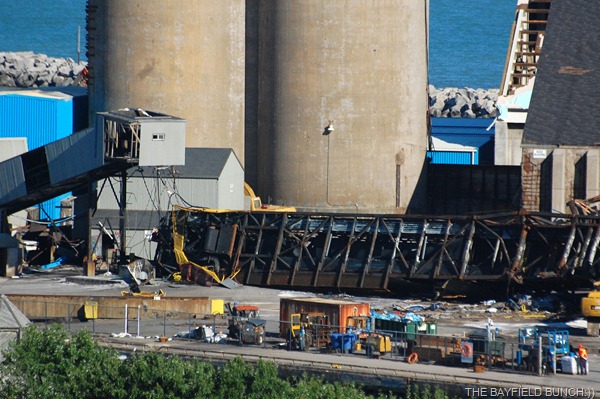 TODAY, THAT CONVEYER HAS BEEN REPLACED WITH THIS NEW BLUE CONVEYER BELT HOUSING

We've had our Jeep Wrangler just over 2 years now & I remember the day driving it back from Waterloo Ontario to Bayfield well. The Jeep was kind of unlike any other vehicle I had ever driven. With it's short wheelbase I found it a bumpity ride with it’s own unique bunch of odd quirks, jerks, hips & hops.  It’s those quirks & jerks that keep it’s driver well aware & on full driver alert at all times. Over the years all those hips, hops, & bumpity bumps have disappeared. Or, so it would seem until I happen to drive another vehicle. Today we took the Hyundai Santa Fe to visit my Uncle Harry in Mitchell & whenever I drive that car I am amazed at how smooth & soft the ride is. Of course that is the norm for the majority of vehicles nowadays & I can easily forget that when I am putt putting along in my little Jeep which just seems so normal to me know with it’s seemingly smooth quirks, jerks, & hippity hops. 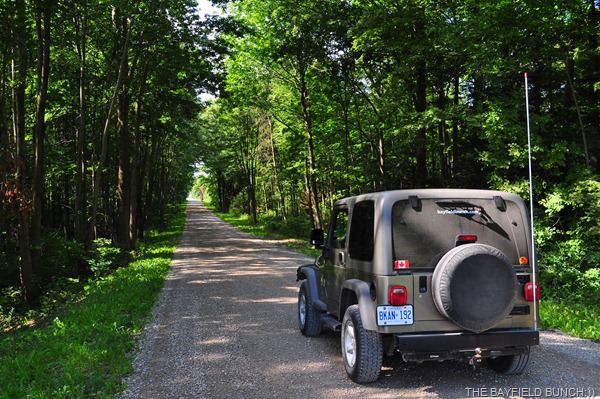 THIS LITTLE JEEP WRANGLER WITH IT’S 6 CYLINDER SIX SPEED MANUAL TRANSMISSION HAS TURNED OUT TO BE ONE OF MY ALL TIME FAVORITE VEHICLES…I LOVE IT FOR IT’S SIMPLICITY:)) 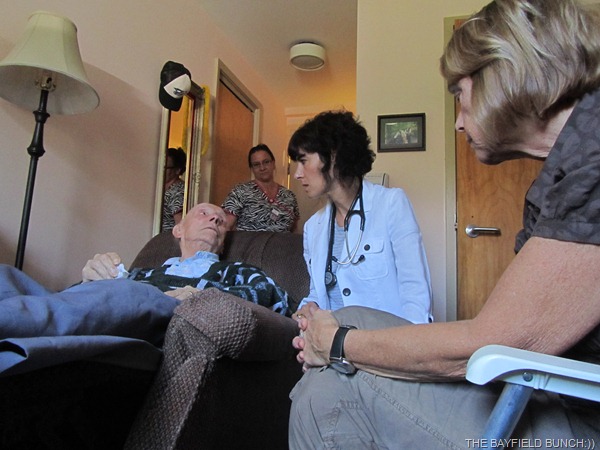 Bit of a slow writing day for me so thought I would tell you about how one day the Bayfield Bunch, while boondocked in Quartzsite Arizona, were completely set up in 3 separate locations, all within a couple miles of each other......and all on one day. As most readers know, we do not like to be within earshot of any other RV'ers. No, we aren't the noisy ones, but many times our neighbors have been & neither Kelly or I have any tolerance whatsoever for somebody else's loud music, generator, ATV, or alcohol fuelled hollerin & hootin. If we can here people talking.....we are waaaaaay too close. As well, in the past we have camped with 3 dogs & out of simple consideration for other people we stay well away so our dogs wouldn't bother anyone by wandering onto their site.  Boondocking is our favorite way to go but even that can get crowded sometimes.  We had been in a quiet section of desert about 6 miles south of Quartzsite Arizona for nearly a week. There were many other rigs around but they were far enough away not to bother us with their noise. Here then, is where my story picks up about the time we had 3 different locations in one day........................... 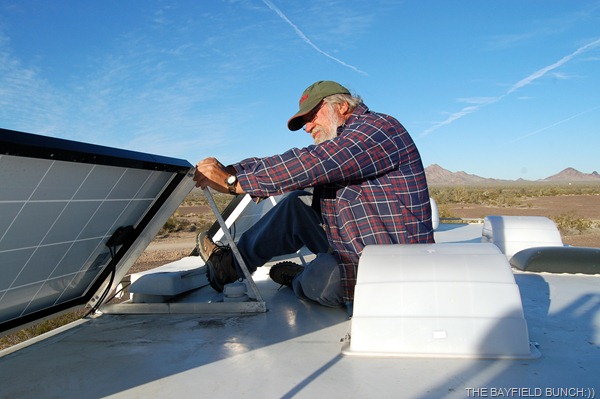 The big 40' Class A Motorhome diesel pusher rolled leisurely into our area, slowed down, & stopped. Oh oh!! We watched closely & had our fingers crossed that he would move on because there was lots of room & wide open spaces where we were. He didn't!! The couple got out, unhooked their car, made a slow pass around the area in it, came back & moved their motorhome even closer to us. We had a sinking feeling that our quiet & peaceful little corner of Eden was about to end. When we saw the driver unlock a bin door & begin to pull out a bunch of orange traffic cones we knew the writing was on the wall. He walked out from his rig placing those cones around a very large area. Obviously more motorhomes were on the way for some kind of big Rally. We were beat, & our only sane option was to pack up our whole campsite & head off in search of a quieter spot. I am not a confrontational person, & besides, this was BLM land & nobody has any claim to any spot.  I'm sure they were fine folks in that motorhome but our experience has shown that many rigs huddled together mean much big people noise & people noise is not one of our favorite things. We did wonder however, why he picked this area close to us when there were numerous other spacious areas all around. Just one of those people things I guess I'll never understand. 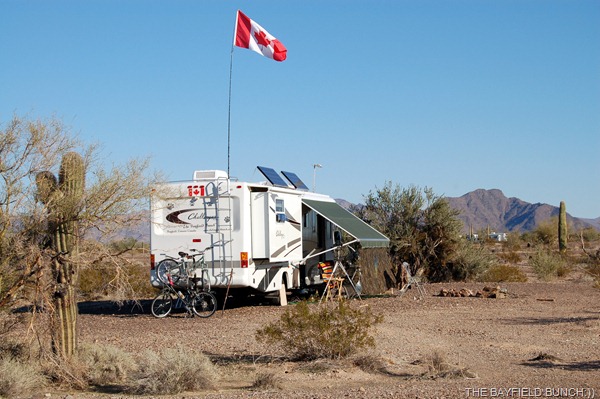 OUR ORIGINAL SITE BEFORE THE BIG 40’ DIESEL PUSHER ROLLED IN

Took us the best part of an hour to get everything packed away. Awning up, outside furniture loaded, bicycles put on the rack, flagpole down, satellite dish dismantled, mats picked up, wires unhooked, firewood loaded, doggy toys gathered up, inside things stowed away, slides in, jacks up, etc. etc.

On one of our morning walks earlier in the week we had come across an area about a half mile away & decided that if we had to move because of congestion at some point, this would be a good spot to go. So, that's where we went.  Should mention this was in January while the ‘Big Tent’ Quartzsite thing was going on, so thousands upon thousands of RV’s were in the area. Took us 3 trips with the car carrying things to the new site but soon we were in the process of re-setting up our new digs. It was actually a nicer site than the one we just left. A few more trees, a nice dry creek bed & further away from all the other rigs & rallies. Kelly made some nice stone Inuksuk's & set up her Ghost Mountain Agave stocks in a little desert landscaping bed. Got everything re-assembled without too many problems & it wasn't long before we were sitting in our favorite gravity chairs relaxing on a beautiful sunny Sunday afternoon again. The turmoil of having to move had settled down, Kelly was on the phone talking to her Mom & Dad in Spencerport, New York, doggy guys were snoozing on the new outside mat & I was happily tipped back in my chair reading my book. Nobody near by, lots of room all around us & everything was right with world once again. 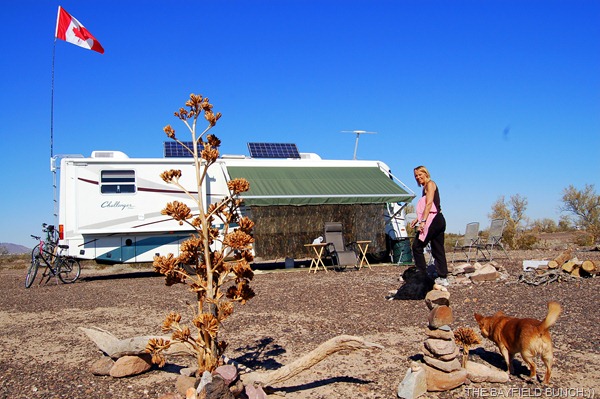 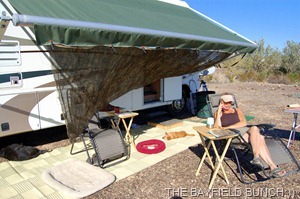 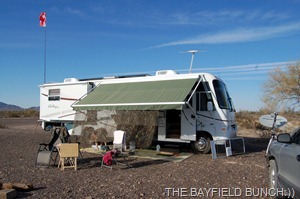 And then..............we saw a Class A Motorhome coming, followed by a 5th wheel. Oh no!! Surely these people will have some respect for our privacy, right. Wrong!!!! They circled the large open area & then came right over & pulled in just a couple stone's throw away from us. And worse yet, they were towing ATV's & dirt bikes!!!! I knew our peacefully quiet desert was about to be shattered by growling & whining engines.  We couldn't believe it. With all the room & open spaces in this desert area they came right in on us. I knew this was public land & they have as much right to be here as we do, but...%$@^&**. I understand being close to people in campgrounds because that is what's expected. It just comes with the territory. But out here in the desert with acres upon acres of room??   They unloaded  all their stuff & I saw what looked like a couple cases of beer.   Started up the noisy dirt bikes & I heard one young guy holler in a loud gruff voice, "I WANNA RIDE!!!" 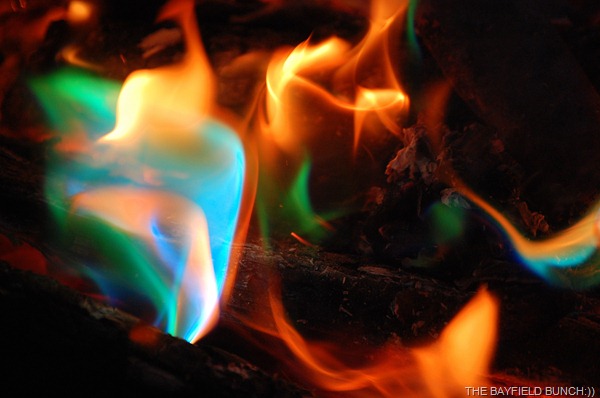 That was it for me right there & then, & to say my anger was over the top would be putting it mildly, but there was absolutely nothing we could do, except.......move!! And, so it was, as we once again began the process of packing up the campsite. Awning up, outside furniture loaded, bicycles put on the rack, flagpole down, satellite dish dismantled, mats picked up, wires unhooked, firewood loaded, doggy toys gathered up, inside things stowed away, slides in, jacks up, etc. etc.  And, this time I'm not going to say, "I'm sure they were fine folks in those two rig’s!! 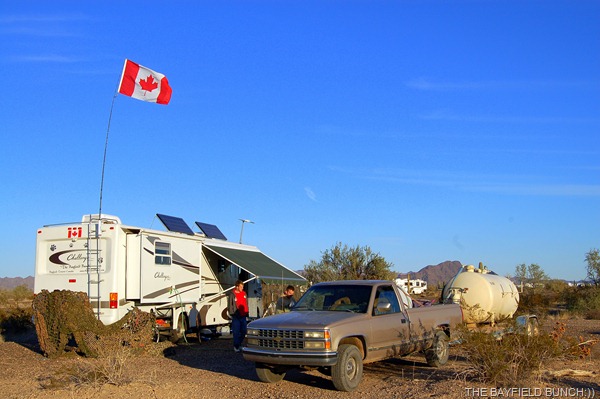 YEP, EVEN A HONEY WAGON CAN TAKE CARE OF YOUR BLACK TANK OUT IN THE QUARTZSITE DESERT SOMETIMES

We moved to a different area further back in the desert which we scouted out with the car first. Once again, nobody near us except for one Class C rig which we were considerate enough to give a wide berth. When you see a lone rig boondocked on it’s own away from others, there is usually a good reason for that.  Those people are there to enjoy the quiet desert environment & have purposely made an effort to remove themselves as far as possible from all the noise & traffic a bunch of RV’s together produce.  Both Kelly & I have great respect for people's privacy & would never ever pull into an area & go park beside the one rig that might be there. We consider that extremely thoughtless & rude!! 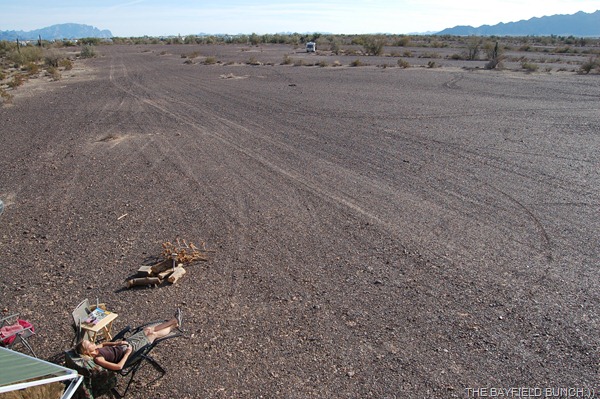 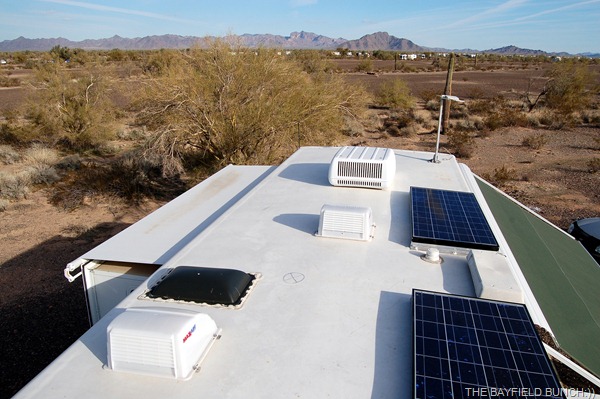 OUR THIRD & FINAL LOCATION FOR THE DAY BEING SURE TO LEAVE LOTS OF ROOM BETWEEN US & THAT DISTANT CLASS C…WE ROLLED OUT A DAY LATER HEADING FOR AN IKEA STORE SOUTH OF PHOENIX, BUT THAT’S ANOTHER STORY FOR ANOTHER TIME:))

But wait, just as we were about ready for bed that night…………what was it I heard approaching across the quiet desert floor..........Awwww, twas just the wandering desert wind slipping down out of the Kofa Mountains to play gently across the desert floor under another clear moonlit Arizona sky:))

GROANER'S CORNER:(( And, here are a few tips for making your RVing experience the best it can be.....

- When using a public campground, a tuba placed on your picnic table will keep the campsites on either side vacant.

- Get even with a bear who raided your food bag by kicking his favorite stump apart and eating all the ants.

- You’ll never be lost if you remember that moss always grows on the north side of your compass.

- When camping, always wear a long-sleeved shirt. It gives you something to wipe your nose on.

- You can compress the diameter of your rolled up sleeping bag by running over it with your rig.

- Take this simple test to see if you qualify for solo RV'ing. Shine a flashlight into one ear. If the beam shines out the other ear, do not go into the woods alone.

- You can start a fire without matches by eating Mexican food, then breathing on a pile of dry sticks.

- In an emergency, a drawstring from a parka hood can be used to strangle a snoring bed mate.

- Bear bells provide an element of safety for hikers in grizzly country. The tricky part is getting them on the bears. Just after 'Happy Hour may be the best time to try.