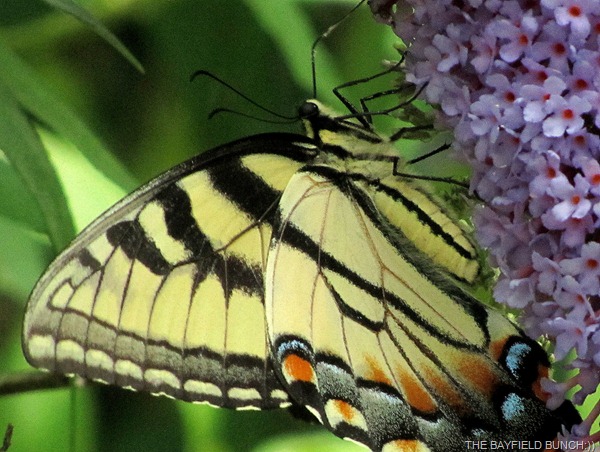 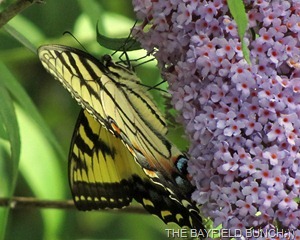 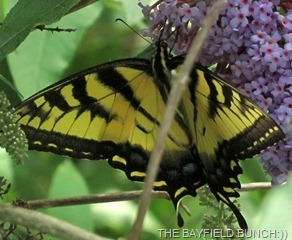 Only thing we did today was slip down to Mitchell & see Uncle Harry. He seemed to be feeling better than the last few weeks & Pheebs even got some smiles out of him. Harry has a bit of a problem talking on the telephone now so his sister, Jean (Aunt Jean) emailed us a letter for him & we printed it off & the photo below shows Kelly reading the letter to Harry this morning. 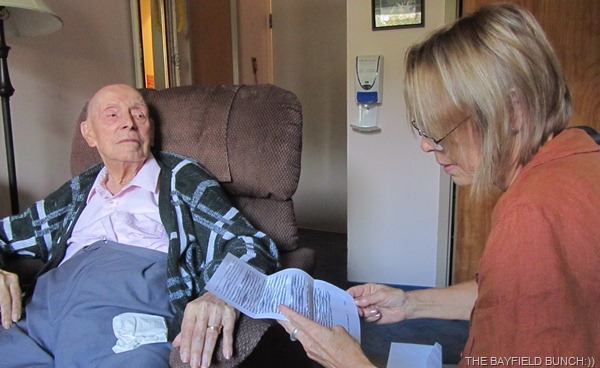 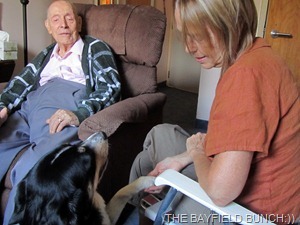 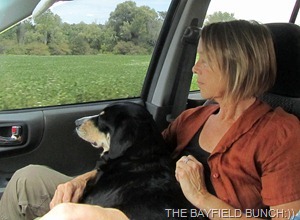 Had an email from RETIRED ROD the other day wondering if we had considered buying & towing a small enclosed utility trailer to Arizona this winter. It would hook onto the Jeep behind the rig & we could load it with some stuff for our house there. Briefly thought about that but discounted the idea for several reasons. Don't think I would be real comfortable towing a combination like that for starters. We may have to go the long way round to reach Arizona this winter & I'm sure the extra weight of a trailer would chew through a lot more gas. I do need a utility trailer down there but it does not have to be anything fancy. Just a simple box on wheels like we have here in Bayfield. There's no room in the Jeep to put anything of size we might find at garage sales etc. Just need it to haul home some rocks & stuff from the desert & take garbage to the local dump. Paid $300 for our Bayfield utility trailer just about 10 years ago now & it has served us well.  (a big thanks to neighbor & friend Bruce who refurbished it two summers ago) 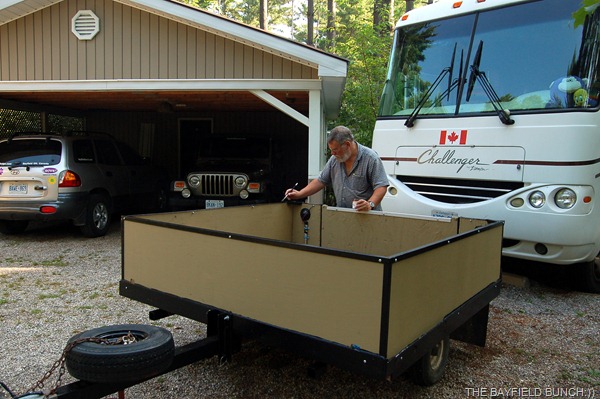 Kelly came across another RV Blogger's travel blog awhile back. Fellow's name is Andy Baird & you will find some very excellent nature photography here along with his narrative. Be sure to check out his MOUNT EVANS post photos of wild Mountain Goats. I have put him on our sidebar……but, like ED FREY'S blog, it doesn't update itself with each post so unfortunately it will continually sit at the bottom of the list.  I've never been able to figure that problem out.  At least you have some company down there now Ed:))

Just occurred to me today that I missed my annual foot long hot dog back in the Spring. For over 9 years now I've made an annual trip to the south end of Bayfield for my foot long hot dog (with the works) at the Woodland Drive-In. Maybe I figured until they found the missing 3 inches, I wasn't going back because every year I went I would end up asking myself the same question!! Why isn't a footlong hot dog......a foot long?? I always suspected the foot long of being a shorty, so one day I took along my tape measure & measured the dog & sure enough it came out to 9 inches. Why is that!!!! If your going to call it a footlong hot dog then make it a foot long!! Does not 12 inches = 12 inches anymore?? Why can't the butcher & the baker get together & agree to match their products to 12 inches. (no, the Candlestick maker has nothing to do with this) Or, maybe the Drive-In should be advertising them as, "9 inchTube Steaks" or "Mini-Footlongs" or "Stretched 8 inch Dogs" or "Shortened Pig in a Blanket" or "Swine in Nine!!" Or maybe they should just knock off 40 cents an inch or something. I'm not singling out the Woodland Drive-In here & I bet anywhere one goes for a foot long hot dog it is probably going to come out on the shorter end of things. Throw a tape measure in your pocket & check it out next time.

OLD FOOTLONG HOT DOG FILE PHOTO (looks like I may have already chomped an end off this dog)
And why is that every time I go to put an electrical plug into a socket it is never the right way round. The fat prong is always at the smaller hole & vice versa. And since when did extension cords have to have minds of their own. No matter how straight I lay out a long extension cord, as soon as I turn my back it twists itself up like a spastic pretzel & the longer I'm away the more spastiker it gets!! Tangled extension cords can reduce me to tears in seconds:(( And garden hoses.....where do they get off thinking they're so smart. Try & walk anywhere with a garden hose in your hand & it's going to snag itself on something. Even if there's nothing there to snag itself on, it's going to snag itself anyway just to be miserable. And to add insult to injury, it will kink itself as well. I call that a kink & snag!! Kinks & snags can also reduce me to tears in seconds:(( And how about whenever you bend over to pick something up, you have to drop it!! I call that...... pick & drop. Happens to me almost every time.  Bend over to pick something up, drop it, pick it again, drop it again, pick up again……well, you know how it goes!!  Hate when that happens.

And why does the shovel, rake, or whatever long handled device you lean against a tree or something, have to fall over as soon as you turn your back. I have leaned garden rakes against things, stood there & stared at it to make sure it wouldn't fall, turned around to walk away......."clunk!!" And how come I can't hit a nail on the head like everybody else. Awhile back I was nailing up some old pine fence rails with 5 inch nails. No big deal except it would take me 10 swings at that nail to hit it twice. And when I did hit it, the nail would go in crooked or go flying off over the fence into the flowerbed somewhere!! Hammers & nails can reduce me to tears in seconds. And, don't even ask me about small gasoline engines:(( 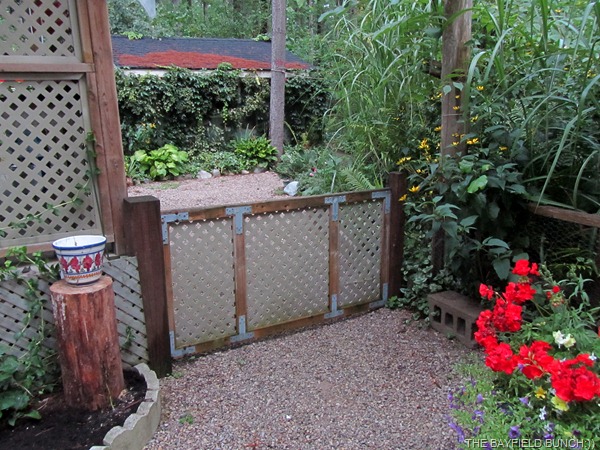 DRIVE-WAY GATE TO OUR BACK YARD
I do have one good thing on my side though. A darn good handy & patient wife. I was trying to put air in one of the Santa Fe's tires one morning. Getting air into a tire for me has always been a major feat. I don't know why that is but it just is. Had the compressor going full tilt but try as I might the air just wouldn't co-operate again. Kelly walks over, picks up the hose, puts it on the valve & whoosh, all the happy little air particle guys merrily rush off into the tire. Same thing happened a few years ago on the Ranch in Arizona when I was trying to blow up a bicycle tire. No way Jose!! Kelly comes over & whoosh, away go the happy little air guys again. These kinds of happenings are almost a daily occurrence at our house but instead of looking on the negative side of things & my limited abilities, I have to look on the positive side & be thankful I have a mechanically patient, calm, cool, & collected wife who understands her husband is a bit of an impatient boob when it comes to handyman things. But hey.......I'm still pretty darned good at getting tightly stuck on jar lids off..............:))

In Sunday's post I talked about our experience at the south rim of the Grand Canyon & a few people mentioned we would like the North Rim better. Couldn't agree more. I first visited the North Rim of the Grand Canyon in May of 1992 & Kelly & I were there back in November of 07 before swinging around to the south rim a few days later. No comparison between the two rims as far as people go. Both times at the North Rim there were no great hordes of people. Especially when Kelly & I were there. Maybe half a dozen cars in the parking lot, if that. Totally loved the North Rim & would like to go back & spend a week or so there sometime. In the meantime be sure to check out Chuck & Gerri's post over at HAPPY TRAILS. They have some great photos of a storm passing through the Canyon. They met another RV Blogger at the rim who was able to show them around. GAELYN is a Park Ranger there. We met Chuck & Gerri at Darby Wells Road near Ajo Arizona this past winter & we met Gaelyn near Congress Arizona this past March when we dropped in to see RV SUE & HER CANINE CREW boondocked in the desert near the end of Ghost Town Road:)) 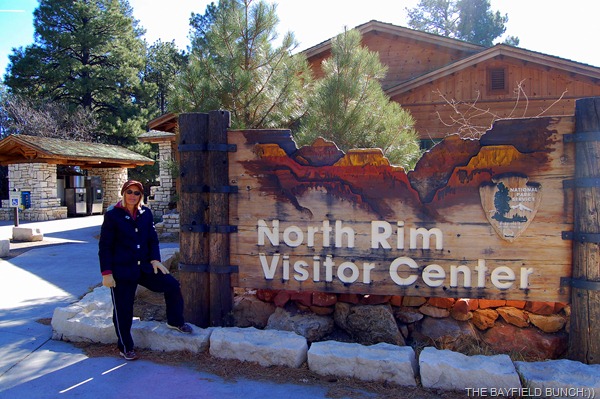 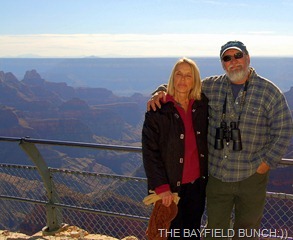 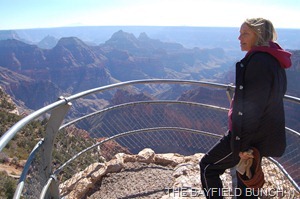