A FINE MORNING FOR A JEEP PHOTO TOUR:)) Soon as I spotted those big white fluffy cotton ball clouds high overhead early today I knew I had to get myself out for a photo tour.  With our cooler temperatures & light breeze it was just one of those picture perfect weather mornings.  Feeling the need for speed I made my first stop at McDonald’s for a small coffee & carrot muffin before heading on down to the harbor.  Wanted to have a look at some of the work progress on the large Sifto Salt mine there.  It’s nearly a year since the devastating tornado whipped in off the lake & tore up the town. 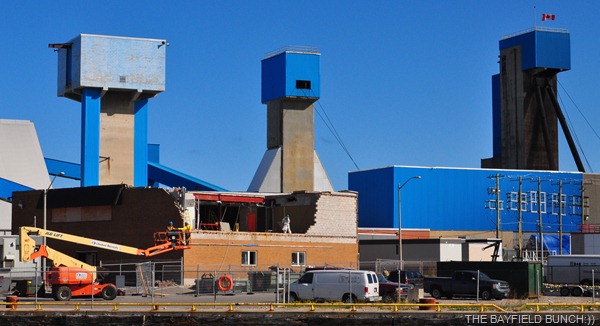 Walking along the pier I saw a person standing alone up ahead.  Figured she was taking a few photos of a large lake freighter tied up alongside the salt mine.  As I said, it was a nice morning for photos.  As I drew closer I recognized the lady as Marie, one of the co-owners of our 5 Seasons Estates Park where we live.  She also had her cell phone in hand & as it turns out she had just been talking to her son Del, who happens to be an electrician.  Del is part of a crew doing much of the electrical re-wiring at the mine since the storm.  Marie said Del was just heading out for morning break & would keep an eye out for her across the harbor entrance.  A minute later we heard a distant whistle & sure enough, we could see Del in an orange work vest & hard hat moving along a fence line to-ward’s the water’s edge.  As I headed back to the Jeep I managed to grab a couple photos of Del & his Mother shouting back & forth across the harbor entrance over all the background construction noise. 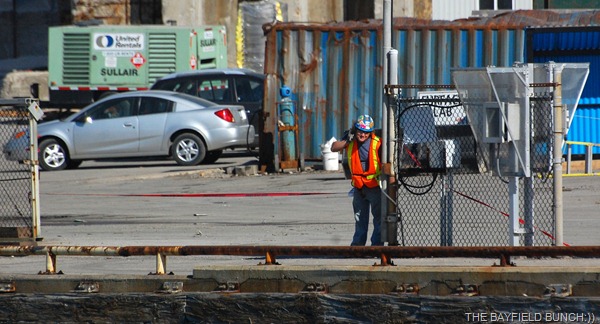 If your vocal chords are in good tune, be sure to drop over to Karen & Steve's place today & belt out a few bars of the old western song favorite, 'Raw Hide'. But, there is a difference. Music is the same but some words have been changed. Check out, ODE TO THE FULLTIMER. 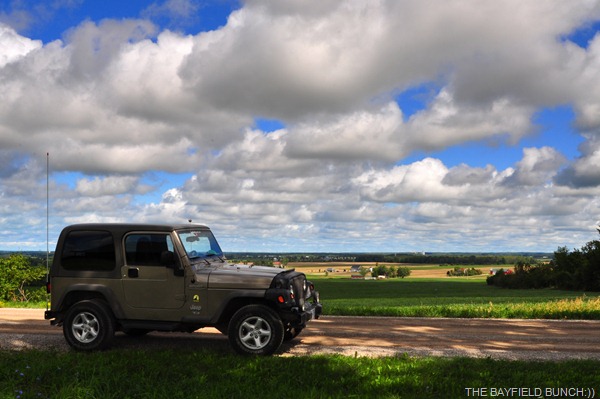 A commenter questioned my 'new ink in the ink wells' description in Thursday night's post. Well, we sure did have ink in those ink wells.  As I recall, the ink wells were in the top right corner of the old wooden desks we sat at in the Tavistock Public School I attended.  Also the little one room school house way up in northwest Ontario near the tiny town of Oxdrift too.  And that ink had kind of a yukky metallic smell to it as well. I recall the thick half moon glass ink containers that fit into the hole in the desk. They could be taken out & cleaned although I don't remember doing that. I'm talking early to mid 50's here. One of our classes was 'Penmanship' & I recall the long wooden pens used one time. They had a sharp metal tip on them & you had to be careful not to shake or tip that pen & dribble ink all over the place. Dip the pen in the ink well and practice writing our exercise sentences in our scribblers. And, I seem to recall those ink wells had little metal hinged lids on them too. You could flick them & make a clinking noise on the glass container which always annoyed the teacher.   I think it was the teacher who filled those half moon inkwells from a large container. We probably poured the ink back in the container after the writing class but I don't recall that. But, it was the FOUNTAIN PENS with the little rubber bladders in them I remember best. You dipped the pen in the inkwell & with a small lever on the side somehow sucked the ink up into the pen. Seems to me one could also use that same lever to squirt ink back out of the pen onto the hair of the person sitting in front of them.  Oh, & here’s a little joke from that era.  Music buffs will get this one.  If you put some spots of ink on your hand & then held your hand up to your ear……… what would you be doing?  Listening to the ‘Ink Spots’ of course:)))))))

ROWS OF CORN STRETCH OVER A DISTANT HORIZON
And, when’s the last time you heard a good old humorous rant told in a good old American way. Stop by Mark’s latest post over at BOX CANYON BLOG & he will lay one on ya……maybe a couple. Well Okay, maybe more than a couple:)) 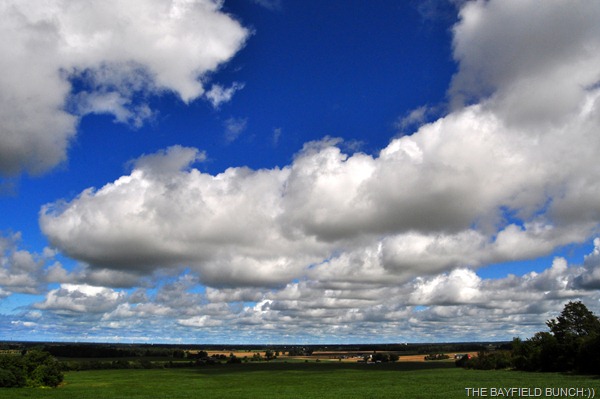 OUR RURAL FARMLAND UNDER A BIG SOUTHWESTERN ONTARIO SKY

Long time readers may want to skip over the next part because it is a topic I have referred to before on several occasions. It's the one about filling my motorcycle up with diesel fuel but I thought some of our newer readers might get a kick out of my folly that day a few years ago. 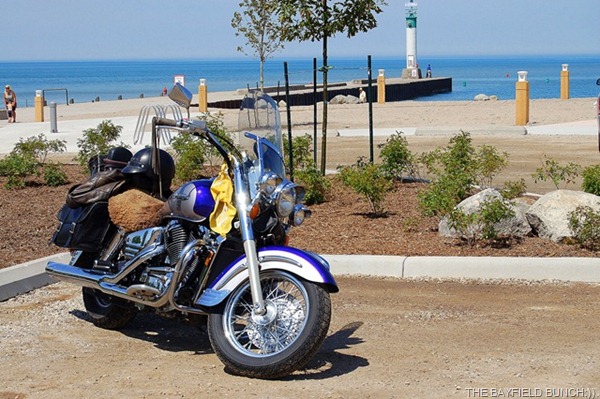 FILE PHOTO FROM A BIKE RIDE TO GRAND BEND ONTARIO

"Is that a diesel motorcycle sir" Thought it odd hearing those words coming from the young gas attendant fella at a Shell station in Goderich Ontario a few years ago. I had just rolled in on my motorcycle & topped up my gas tank. I generally run regular gas in the bike & about every 4th tank or so I fill it up with Premium. To-day I decided on premium, so by-passed the regular nozzle & without looking, reached for the premium nozzle on the other side of the pump & filled er up!! I said to the young fellow, "no, this is a gas motorcycle, to which he kindly replied, "well, you just filled up your motorcycle with diesel fuel......sir." ARRRRGGGGHHHHHH!!!! There it was, right on the pump beside me....DIESEL. Well, to say I could feel my stomach sliding right out from under me would be putting it mildly. What a huge feeling of frustration & anger I had with myself. (not to mention embarrassment) Just taking things for granted & not paying attention to what I was doing again!!!! 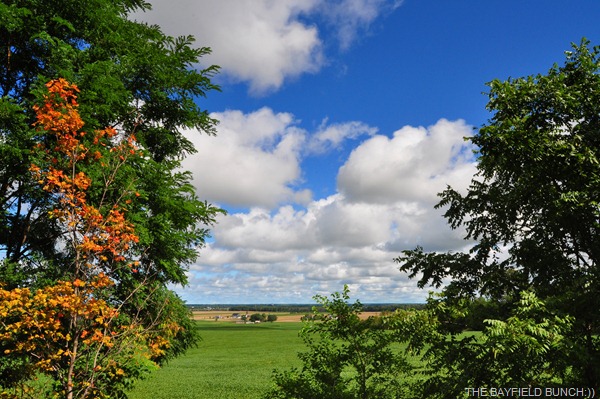 A SPLASH OF EARLY AUTUMN COLOR

Wheeled the bike around the corner of the garage, slunk out of sight & got the owner's manual out of the saddle bag. Tried to find out if there was some kind of a gas tank drain mossmagator valve. Couldn't find anything. Even got down on the ground & had a close look up for some kinda something.  Finally dawned on me that if I had a hose I could probably siphon the diesel fuel right out of the tank. No hose at the gas bar so walked across the large parking lot to a Canadian Tire store at the far corner. Got me a siphon hose with a plunger thingy on it & headed back. The young fellow at the gas bar fetched me a big white 5 gallon plastic pail. The siphon didn't work well because the siphon part was a solid plastic tube so wouldn't bend well to get down into & around the bottom of the bikes tank. Back to Canadian Tire for a second time & got a 3' section of flexible gas rubber hose. Should have done that in the first place because this hose worked perfect except for one little thing. No suction plunger on this sucker so I had to use my mouth to suck the fuel up the tube to get the diesel fuel flowing. Needless to say I ended up with diesel fuel in my mouth, my nose, in my beard, on my pants & all over my shoes.  I clumsily tipped over the bucket I was using at one point so had quite a mess of diesel fuel on the pavement. Good thing I am not a smoker or I probably would have lit up the whole parking that day.  Moved the hose around in the tank making sure I got as much fuel out as possible & by the time I was done I had about 3 gallons of diesel fuel in the 5 gallon plastic pail. Probably another half gallon on the ground & another half gallon on me!!

Pushed the bike back out to the gas island, DOUBLE CHECKED THE GAS PUMP & re-filled my tank with V-Power Premium....GAS!! This whole ordeal lasted about 40 minutes but luckily ended well. If that young sharp eyed gas attendant hadn't noticed my mistake I would have rode out of there with a tank full of diesel fuel & quite possibly have ruined my motorcycle engine.  I thanked him & insisted he take $20. He didn't want to accept the $20 but I pulled rank on him using the Senior age factor. Truly a nice kid. Next stop was the car wash to hose down the diesel infested motorcycle & the last stop of the day was home to hose down the diesel infested & somewhat still embarrassed……….human!!!! 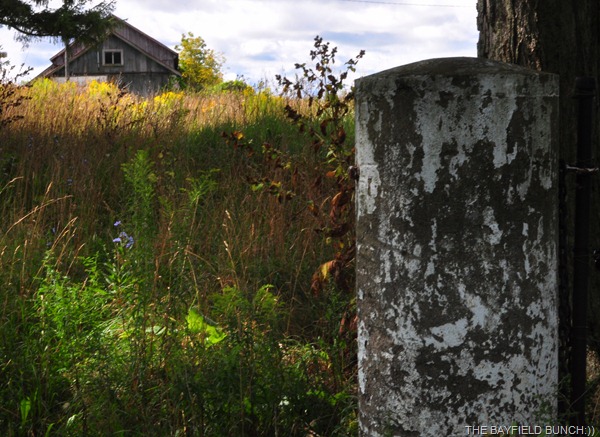 GROANER'S CORNER:(( I feel like my body has gotten totally out of shape, so I got my doctor's permission to join a fitness club and start exercising.
I decided to take an aerobics class for seniors.
I bent, twisted, gyrated, jumped up and down, and perspired for an hour.. But,
by the time I got my leotards on, the class was over.