Nice to have a cloudy day once & awhile. Just adds a nice change of perspective to the surrounding scenery. Have always liked the radical change of a passing thunderstorm as well. We are fortunate in this part of the Northern Hemisphere to have 4 constantly changing seasons. From the extremes of a hot humid tropical summer to the barren cold of a Siberian like winter with two of my favorite seasons in between. Spring & Fall. Sitting here in our sunroom I see nothing but lush green thick foliage outside my window. In a short 6 months if I was still sitting here I would look out onto either a gray white snowy landscape or just a dull gray everything. No green foliage except for evergreen trees. All other foliage would be gone with only stark tree branches & skeletal shrubs sticking out of the muddy or snow covered ground. We getaway winter Snow Bird folks sure are a lucky bunch.
---
With threatening rain showers looming I decided against a bike ride this morning. Not really great lighting for a photography drive so decided to leave the Jeep parked. With the ongoing humidity this summer I have not been out & about with my cameras as much as previous years so it's been difficult coming up with new photos every day. Skies cleared in the afternoon but the humidity was just too heavy after a short rain so Pheebs & I didn't venture out. Am so much looking forward to the cooler Autumn air soon. Still working on our travel plans for October but it looks like we do have a departure date now for Saturday October 13th:)) 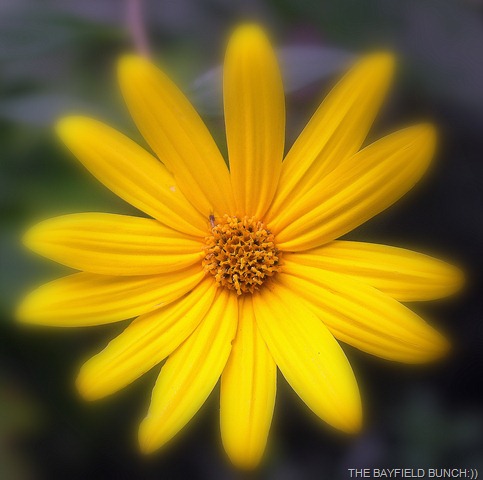 Have you ever had a pine tree sneak up on you when you weren't looking. Happened to me a few years ago. I had walked out to the Motorhome to unplug the electric cord because I intended to move the rig ahead about 20 feet to wash it. Opened the bin door, unplugged the cord, turned around & laid the cord on ground. Did you just catch my mistake? I turned my back on an open bin door therefore making it non existent. Kelly came out of the house with the dogs for our morning walk & off I went......leaving the bin door open!!

---
Upon returning I hopped into the motorhome, started it up, took a quick glance in the mirrors (never do a quick glance!!) slapped it in drive & motored ahead. There is something about the sound of crunching & tearing metal that just kind of takes the stomach out of a person. You know you have just done something bad alright & by the sound of it there is probably going to be a costly repair somewhere. I knew there was no need to panic because whatever it was I screwed up would be out there patiently waiting for me anyway. I hazarded a look in my drivers side mirror & yup, there it was alright. A pine tree had sneaked up alongside the motorhome when I wasn't looking & all but tore off my (open) bin door. Trees will do that to RV's sometimes. But, I never thought a tree was smart enough to open the bin door first before attempting to wrench it right off the coach. After all, I had closed it...right??

Took my sick feeling stomach & exited the coach, walked around behind the motorhome to the drivers side. The bin door was twisted at an awkward upward angle of course. Took it in my hands to try & twist it down but the whole door just came right off leaving an open & gaping electrical bin hole. The whole upper hinge mechanism was all torn to ratsheep. Torsion bar hanging askew, body flange bent, etc. etc. Amazingly enough the bin door itself was still intact. Wasn't twisted or bent, & no paint missing but that still didn't alleviate that awful feeling you get in the pit of your stomach when you've just screwed up by not seeing a pine tree sneak up on you. I remember my Dad having a brand new Honda generator years ago at his cottage, leaving it behind the car, & then promptly backing over it. The look on his face that day was the same look I had on my face the morning I damaged that bin door!!

There was no point in me trying to repair it because it was well beyond anything I could fix up with Scotch tape. We have an auto body repair shop near us so I took the rig over there & left it with the professionals. Picked it up a couple days later all fixed up but I'm too embarrassed to tell you how much that repair job cost us. Let's just say it took a huge bite out of our income tax return that year.  Kelly was quick to point out to me that things like that don't happen to her. I was quick to point out to her that's because she never drives the motorhome or moves it around. She quickly pointed out to me that maybe it was about time she did!! Case closed!!

‘Footnote’……….that big sneaky Pine tree has since been removed:)) 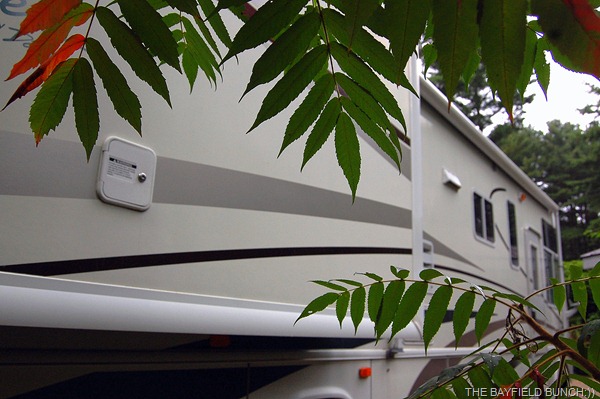 GROANER'S CORNER:(( And a tongue twister tonight from C&C