A BLACKBERRY PLAYBOOK LANDS IN OUR LAP 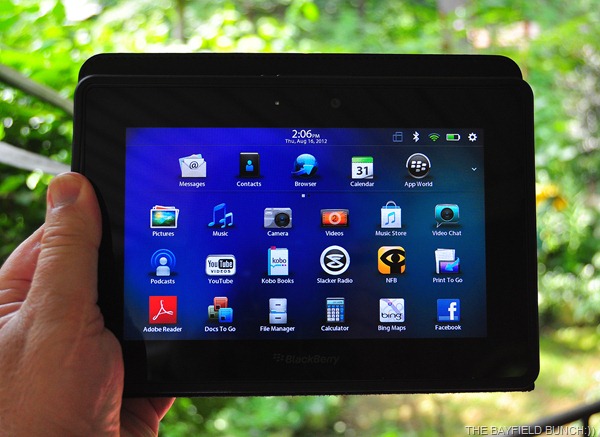 THANKS TO OUR NEIGHBOR MAUREEN FOR THIS ‘FREE’ BLACKBERRY PLAYBOOK

We have a cold front coming in bringing rain later today so figured I would get a bit of organizing done in the Motorhome while the slides are out.  Don’t like leaving them open in the rain if I don’t have to.  Cleaned out under the rig’s bathroom sink & either we got the cleanest bathroom in town or the most household cleaning products under one sink. 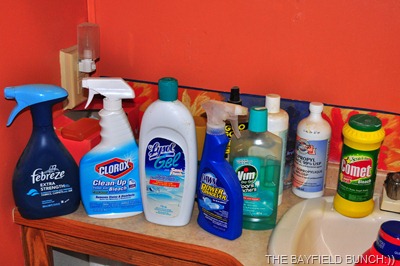 Commenter JC had the following question regarding my Wednesday night post. Question was: " if you are going to maintain your residence in Canada, and you have a very nice motorhome, why would you need another home in Congress? A very good question JC & a question that has more than one answer. Here were our thoughts & reasoning's back on April 1rst of 2011, nearly a year before we bought the house….FUTURE RVING THOUGHTS

As much as we love traveling & boondocking we did notice in the last couple years that some of our days & weeks were beginning to become a little routine & repetitive. That is not a problem for the majority of people but for folks like ourselves & especially me, it leads to a restless state.  About 3 years ago we began thinking along the lines of how great it would be to have a small house or property centrally located somewhere between New Mexico & California. A centrally located home base somewhere in the middle of Arizona. Our plan was to spend our winters here & use this central location as a jumping off point for future travels. We can reach any point of interest in the southwest within just a few days or hours, stay a week or two or three & be back to our Congress house for some good old boots on the ground long hot showers, our own laundry & a long list of house & property projects to keep AL busy for awhile.  Here is a post with a paragraph I wrote that has to do with LOCATION, LOCATION, LOCATION. The paragraph begins under the 3 butterfly pics about half way down. 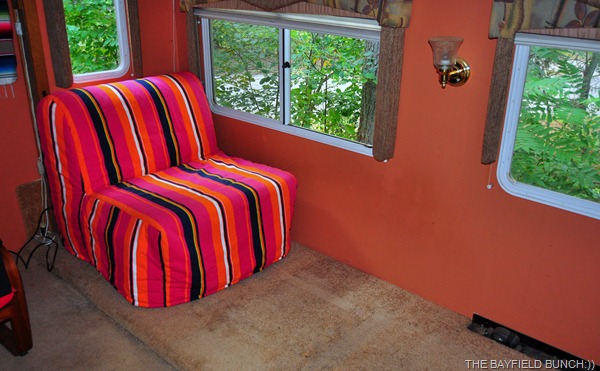 In the end though, it was the following final factor that made up our minds about the Congress house. ‘We just happened to be in the right place at the right time & managed to get ourselves the right deal on a dusty little abandoned  & kinda ramshackle old house sitting on an acre of land on a dead end road………….. just about right in the middle of Arizona’:)) 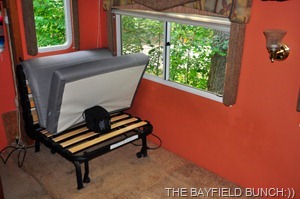 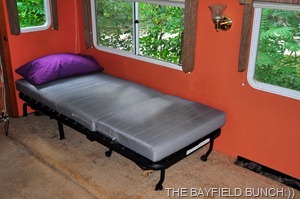 The exciting freshness of spring is long gone & summer's steamy rush is rapidly winding down. Autumn is a time for quiet reflection. Everything seems to slow as we shift to a lower gear. In a month from now the kids will be back in school, the Labor Day week-end will be behind us & trees will be starting to show some nice color. 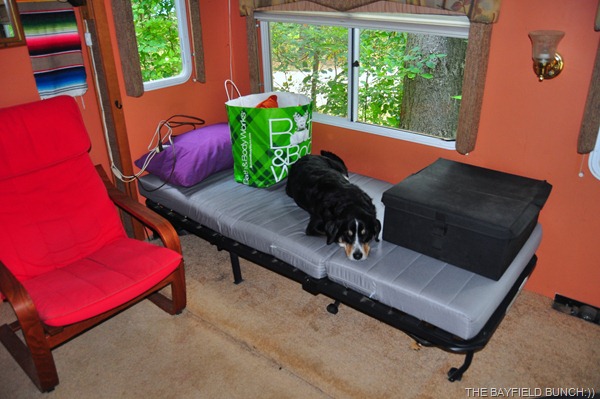 Autumn is also a time of anticipation & preparation for the long cold winter months ahead. It's a cozy time as we scurry about like little squirrels getting ourselves organized & hunkered down to await the chilling winter winds. It's also a time of new learning. I've always had a theory that I think is probably true. Ever since we were kids first starting school we have become programmed to begin an educational process every September. This continued for many years in our early life & became embedded in our very being.  I think it remains with us forever. Even though I've been basically out of the school system since the early 60's I still feel that learning process beginning to stir every year around mid August.

Over the years I have enrolled in various night classes starting in September. Half a dozen photography related courses, a couple beginners computer course, Tai Chi exercise classes & no doubt a few others I've forgotten about. It's always a nice feeling to be learning something new, & especially at a time of year when we have been programmed to do so. In 1968 I started a General Arts course at Conestoga College in September of that year but never finished.  In September of 1990 I started a Photography course at Fanshaw College in London & never finished that one either.  But, at least I got started.   I find the urge to learn is stronger at this time of year & It takes me back to my early public school days & the fresh smell of new books, erasers, new ink in the ink wells, blackboard chalk & stale farts hanging in the musty classroom air. Aw yes, Autumn. My favorite time of year:))

And, thanks to the generosity of Maureen our neighbor, we now have a neat-o Blackberry Playbook.  Maureen’s daughter is very computer land savvy, has all the latest techno hardware & doesn’t like to keep older versions around.  She gave the Blackberry to Maureen recently but it wasn’t something Maureen was too comfortable with, so she gave the Blackberry to us.  Maureen had called the other day wondering if Kelly could have a look at her super slow desktop computer.  Kelly checked the stats & found out right away Maureen’s computer was 12 years old.  There was just no hope of trying to turn an old Dinosaur like that into a a modern day hi tech laser fast computer.  Kelly made one phone call & Maureen’s new Lenova desk top will arrive Monday.   And, we will be helping her to get it all up & running:))   Kelly’s looking forward to figuring out the Blackberry which shouldn’t take her too long.  She will then give me the condensed updated ‘Reader’s Digest’ version on how to use it.  Come to think of it, I could use a little updating myself……………. 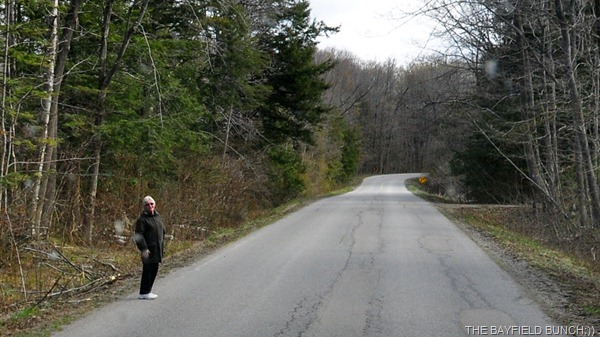 AND, THIS IS NEIGHBOR MAUREEN OUT FOR HER DAILY WALK ON THE VERY DAY WE ARRIVED HOME FROM THE SOUTHWEST THIS PAST APRIL…WE LIVE JUST UP AROUND THAT BEND IN THE ROAD ABOUT A QUARTER MILE TO THE RIGHT 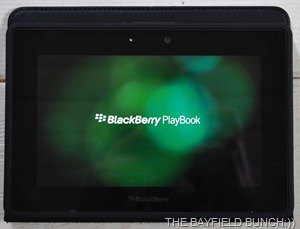 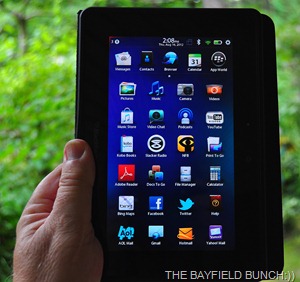 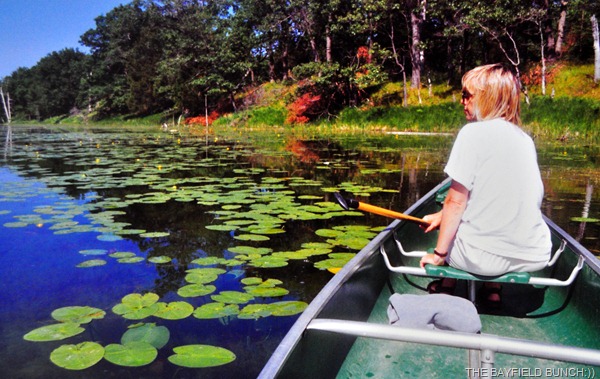 GROANER’S CORNER:((  Reporters interviewing a 104-year-old woman:
'And what do you think is the best thing
about being 104?' the reporter asked.
She simply replied, 'No peer pressure.'