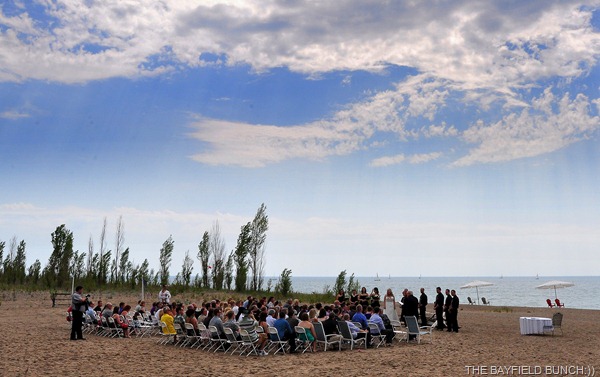 WEATHER TURNED OUT PERFECT FOR A WEDDING ON THE BEACH
We weren't exactly 'Singing In The Rain' this morning but we were sure walking in a steady rain as we made our way around the morning trail.  By the time we got back we had ourselves a very soggy doggy.  The rain started in the night with the live feed weather map showing more rain squalls coming in across the lake for Saturday.  I couldn't help but think of the anxiety all the wedding folks must be feeling about the wedding on the beach over at DEER PARK LODGE today. 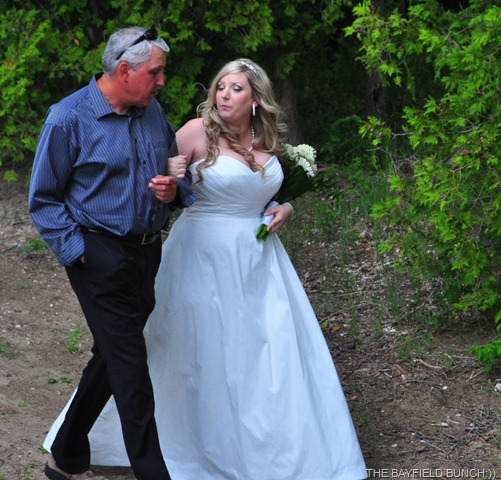 FATHER & DAUGHTER SHARE A MOMENT ON THE WAY TO THE ALTER
Luckily, the rain ended & the sun broke through the clouds about noon bathing the beach in mottled sunlight.  There is a bit of logistics problem at Deer Park in that the beach is about 60 feet below where the cottages & parking lots are located.  There are well over a hundred steps leading down a steep hill to the beach.  Problem is getting older folks down & then back up that hill so I volunteered to transport people with our Jeep.  Matt, the owners Son also has a Jeep, so between the two of us we were able to move any folks finding the steps too much of a struggle.  I could carry one person at a time & Mat could fit 3 into his Jeep Liberty.  Between us we were also able to move the DJ’s sound system equipment to the beach & back too.  All went well & the wedding went off without a hitch.  Kelly said so many people logged onto the beach cam that it crashed the feed so I don’t know if anyone got to see any of the wedding or not.  But, guess what…..another wedding next week-end & another wedding the week-end after that.

STARTING DOWN THE AISLE 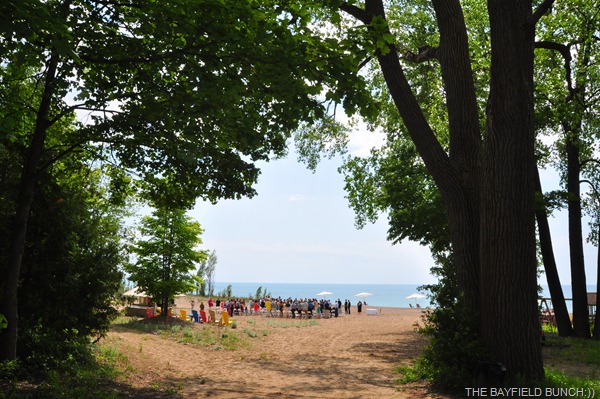 We had quite a go-a-round awhile back trying to decide what the best scenario would be for maybe changing our style of RVing now that we have the house in Arizona.  Do we really need the big Motorhome to make those long 6 day trips between Bayfield & Congress.  What about downsizing to something smaller & easier on gas.  But, if we want to continue our travels around the southwest using our Congress house as a home base then what better RV than we already have.  Already set up with solar, large holding tanks for boondocking etc.  Runs well & suits us perfect.  We thought about towing a small Airstream trailer down & maybe leaving it in Congress.  But, what to tow it with.  I mistakenly thought a Mini-Van would have been perfect but after checking out tow info I found out a Mini-Van was too small.  A Mini-Van would have been perfect for going back & forth plus Kelly would have used it here at home.  Having had 2 previous Mini-Vans I consider them to be the most practical & logical vehicle on the road. 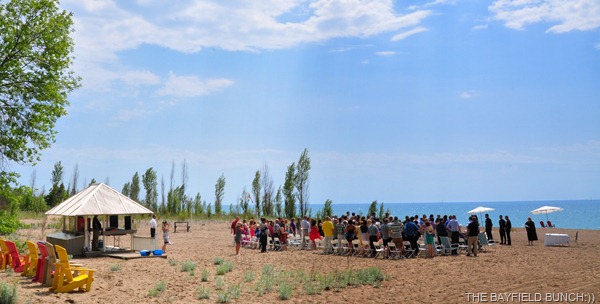 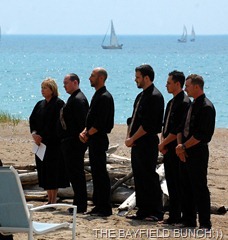 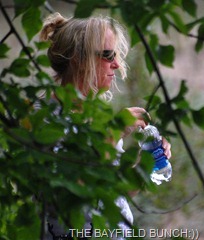 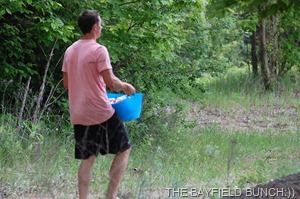 DEER PARK LODGE OWNER KIRSTEN WATCHES FROM THE SIDELINES WHILE SON MAT CARRIES MORE ICE TO THE CABANA
Having never even slept one night in our Congress house yet, we figured the most logical thing for us to do, was to do nothing.  Before we go making any major vehicle decisions we had maybe better spend a winter’s season in & around & coming & going from our southwest house first.  Are we sure this house & location are right for us.  Only way to know that is to spend some time there & I imagine by next year at this time we will have a much clearer picture if we have made the right move or not.  It all sounds good in theory but will the practical side hold up when we get there.  Will this ‘home base’ idea be strong enough to hold our interest over the next few years.  Be sure to tune in next year & see where the Bayfield Bunch is, because right now, we have no idea ourselves. 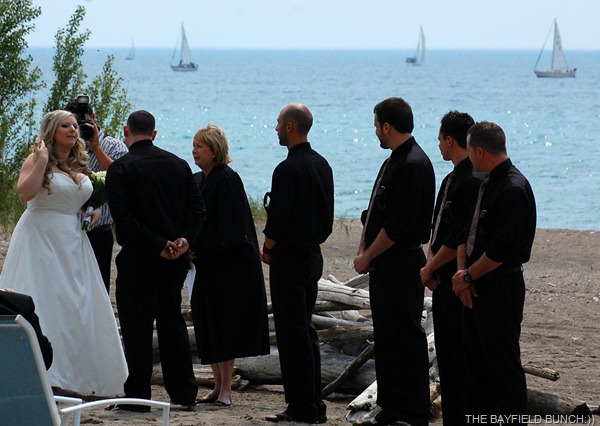 THE MAKESHIFT DRIFTWOOD ALTER CONSTRUCTED BY THE BOYS IN BLACK CAN BE SEEN IN THE BACKGROUND
KATHY left a comment today saying, “Thank you so much for sharing your absolutely heavenly place up there in Bayfield for the summer, with all of the flowers and butterflies!
It must be such an extreme to go to the barren southwest, but I bet it's warmer in winter”! :)   It is those extremes that make each location uniquely it’s own.  If both locations were the same or even similar, the attraction for me would not be the same.  Some may see the southwest as barren but I see it for it’s truly rugged beauty & have been trying to convey that through my photos these past 5 years.  The secret for me lies in the word ‘extreme.’  Not just the landscape but the people & way of life as well.  I liken it to rocketing off to a distant Planet.  Very little is the same as the Planet we left.  Yes, it would be much cheaper for us to head straight south in the winter to Georgia or Florida, but there is no comparison to the extreme scenery & lifestyle change we so lovingly experience & look forward to in traveling to America’s wide open spaces of the yet untamed wild & woolly great American West:)) 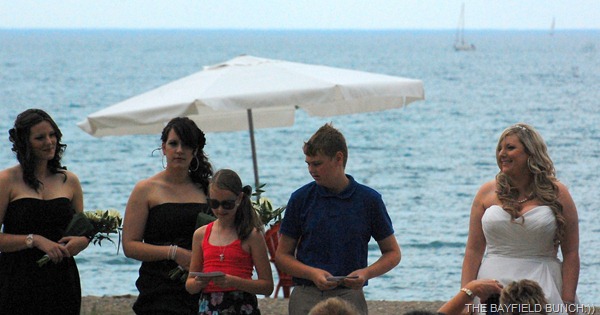 I WAS TOO FAR AWAY TO HEAR WHAT THE LITTLE GIRL IN RED WAS READING
I liked the term 'bricks & wheels' I heard Mark use over at BOX CANYON BLOG a few days ago.  That very aptly sums up many of we Snow Birds out here.  Often referred to as the best of both worlds I sometimes have to agree with that.  Definitely like having the bricks part as a home base for sure, just wish we could tip the balance in favor of a longer wheels part.  Been two & a half months we been home now & despite my natural born hitch-itch I have been confining my itch better than in past years.  I think all the medical appointments in May helped to speed up the time for me.  But, the itch is stirring again & this past week has had me in a restless conundrum wandering about trying to get my mind focused on something usefully constructive.  As I have said before, some folks are content to sit at home most days doing about what amounts to be the square route of routinely nothing.  And, more power to those folks, they should be so lucky as to not be bothered with thoughts of travel & adventure.  But, for people like myself who have little patience for remaining in one location for long dragged out periods at a time, it is a different story.  I'm afraid my restless summer has begun.  Just a few thoughts on a rainy Saturday morning & actually, I think I did very well this year in holding off the itch for this long. 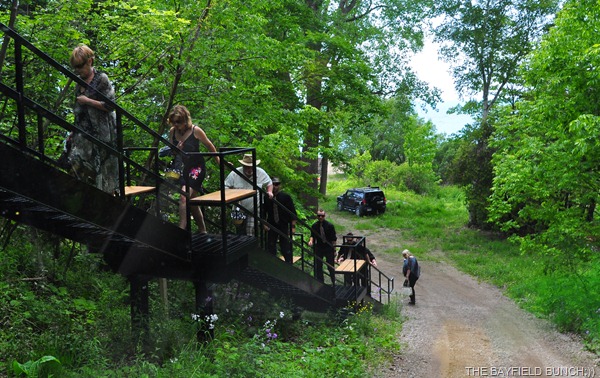 WEDDING GUESTS BEGIN THEIR LONG ASCENT UP THE STEEL STAIRWAY 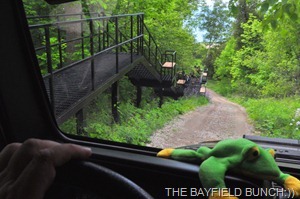 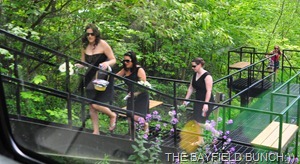 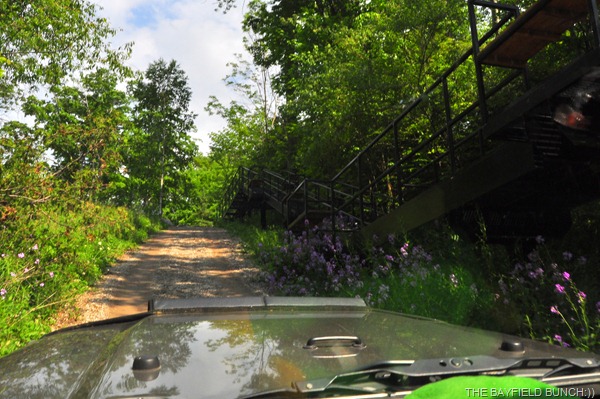