WE ARE OVER HALF WAY HOME & LOOKING FORWARD TO COOLER TEMPS 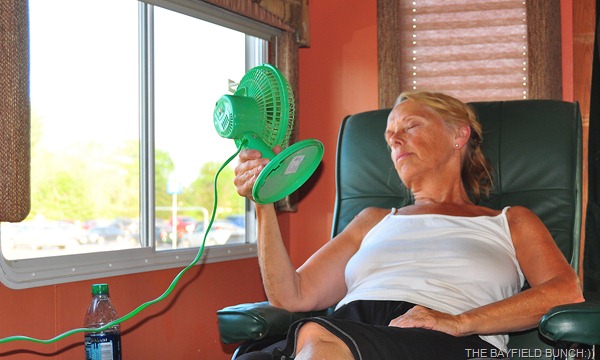 THIS KIND OF SUMS UP OUR UNCOMFORTABLE HOT HUMID DAY
It’s 3:21 in the afternoon on a hot humid Missouri day somewhere about 38 miles west of St. Louis.  We are all set up in a Walmart parking lot & I’m watching, ‘Leave It To Beaver’ on television.  Another long day on the road but we are over half way home.
Knew we had to be on our way early this morning so we were up & at em about 3 a.m.  Rolled out of of the Weatherford Walmart parking lot about 3:55 a.m. & with a big cheesy half moon in my driver’s side rear view mirror we headed east to do battle with the morning rush in Oklahoma City. 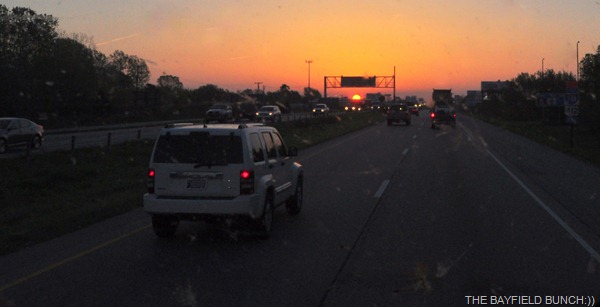 HEADING INTO TULSA OKLAHOMA THIS MORNING…BY THE WAY I TAKE ALL THE PICS FROM THE DRIVERS SEAT WITH MY NIKON D-90
The advice the lady at the info center had given us Sunday was spot on.  In a darkened construction zone we found the ramp leading to the Kilpatrick Turnpike & quickly realized we were just about the only one’s on it…..just like the lady said.  By using the Kilpatrick, Turner, & Will Rogers Parkways, & another one in between I think, we were carried right round the north end of Oklahoma City to Tulsa.  Aside from a distant glow in the sky & a bunch of distant lights we never really did see Oklahoma City.  But, we did see something else.  Toll booths!!  Those Turnpikes cost us a total of $22 but I consider it money well spent for peace of mind from morning rush traffic woes.
----------
We blew into Tulsa just about morning rush hour but Garmin Gertie (our GPS) was up to the challenge & took us right through Tulsa without any problems 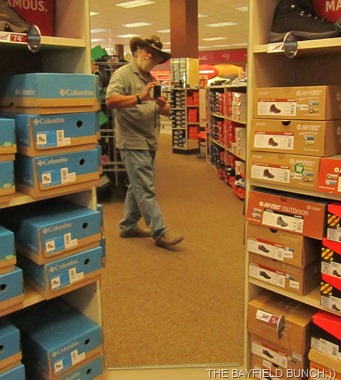 <<< JUST NEVER KNOW WHO YOU MIGHT SEE IN A SHOE STORE
Our day was basically uneventful with the exception of having to unhook the Jeep to back ourselves out of a McDonald’s in Joplin Missouri.  We settled for egg salad sandwich's in the rig & promptly blew right out of town.
----------
We sure are not used to this humidity & it is true what they say about Arizona’s dryer climate being more comfortable.  Temp outside our rig right now is 87F.  Have had our dash air on for 3 afternoons in a row now while driving.  We expect to be in much cooler temps within a couple days.  Yaaaay. 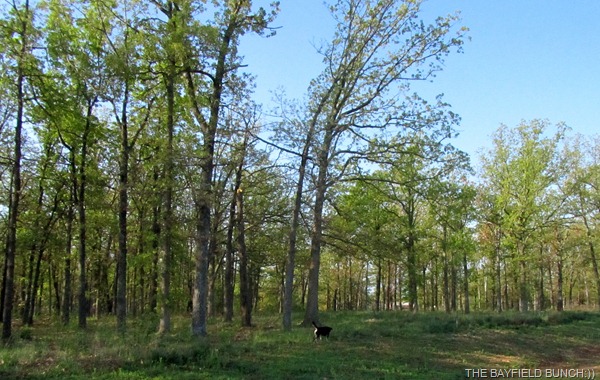 OK, it is now 8:30 at night & things have changed since I wrote the above paragraphs.  We are no longer at the sweltering Walmart location west of St. Louis.  We are now east of St. Louis in a Crackle Barrel lot.  We just couldn’t take the heat & humidity any longer so decided to bring in the slides, pull up the anchor, stow the gear, fire up the engine, put the dash Air on Max & hit the road.
----------
Headed out the parking lot & swung up onto I-44 heading East again.  It was 7 o’clock & I knew the 5 o’clock rush would be over & we could probably make it through St. Louis relatively unscathed.  The cold air coming out of the dash air vents felt so great I could have drove all night. 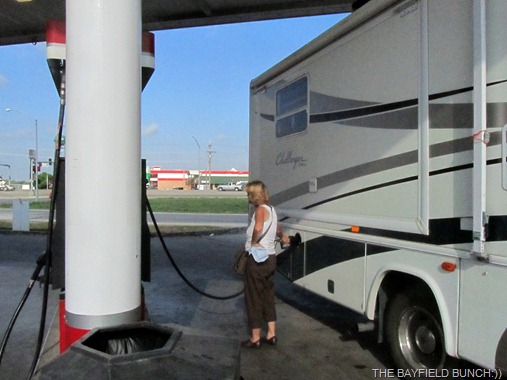 FUEL STOP IN JOPLIN MISSOURI
Cities always look much nicer by night & I did enjoy seeing all the city lights as Garmin Gertie ripped us right through downtown St. Louis & spit us out the other side heading East.  Sun was down, temperatures were down & Kelly spotted a Cracker Barrel.  Compared to that noisy Walmart with all it’s traffic & 40 minute freight trains roaring by half a mile away we felt like we were parked in a quiet outdoor Library setting.  Now, how nice is that:)) 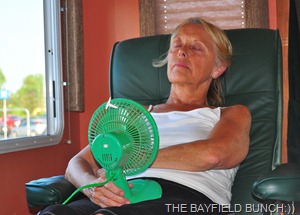 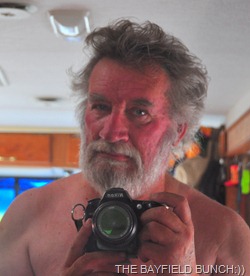 HUMIDITY CONKS KELLY OUT & FRAZZLES MY HAIR!!
I have been sooooo enjoying the look of Spring as we travel through these emerald green April States of Oklahoma & Missouri.  The scenery is identical to our May scenery back home in Bayfield.  Fruit trees are blossoming & I even saw my first dandelions at a Rest Area.  Heard my first lawn mower too.
----------
Glanced at our mileage stats today & it looks like we did 484 miles on our first day, 488 miles the second day & 586 miles today.  We’re getting there…………… 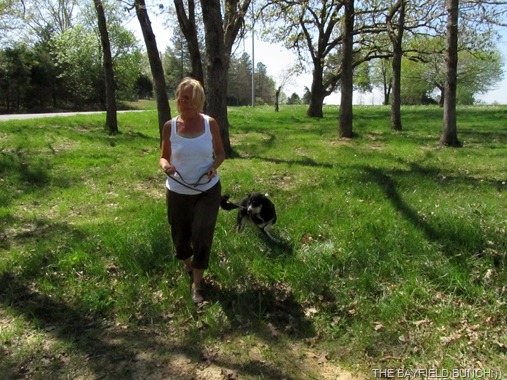 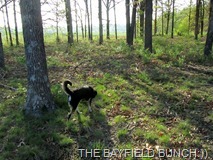 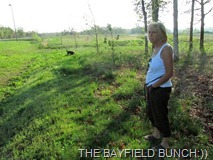 PHEEBS IS ALWAYS ECSTATIC AT EACH STOP TO GET OUT & RUN AROUND IN THE GREEN GRASS
Been wanting a better pair of shoes for awhile & as luck would have we parked right beside a shoe outlet store earlier this afternoon.  Got me a pair of  brown Columbian runners. 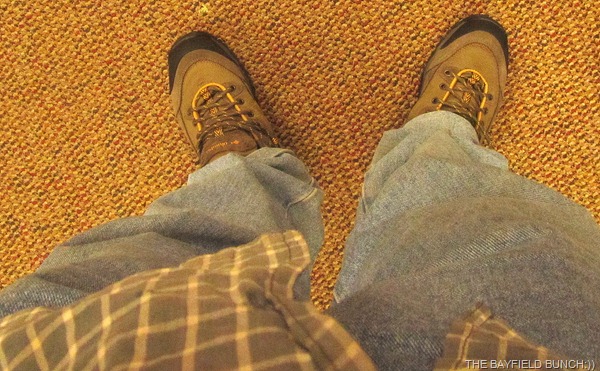 To hot to cook so we walked over to a Steak & Shake place.  Last time I was in one of them was nearly15 years ago in Sarasota Florida with my Aunt Jean. 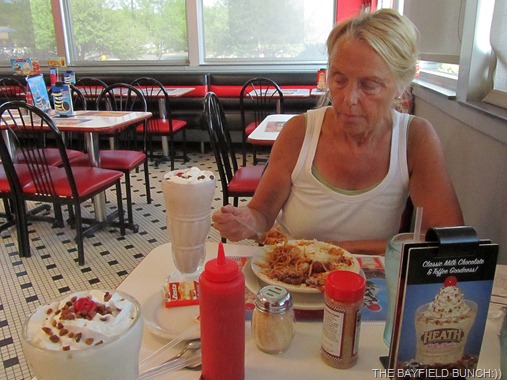 KELLY TRIES OUT A SPAGHETTI & CHILE DISH….PLUS A CHOCOLATE MILKSHAKE
Had a question about why we didn’t have Motor cremated in Arizona before we left.  From experience we know this process can take nearly a week & we didn’t have a week to spare with me having to be back in Ontario for an important medical appointment.  The Wickenburg Vet handles the arrangements & the earliest we could get Motor in was Monday.  Just like people, there are facilities which specifically cremate animal remains so arrangements have to be made such as transporting the animals to & from the facility.  It all takes time & time is something we did not have a lot of.

ROUTE 66 RUNS PARALLEL TO I-44 IN PLACES & THAT IS A STRETCH OF THE OLD HIGHWAY ON THE RIGHT
New Blog Follower HEMBREE joins the Bunch in the last few days of this winter’s travels. Hang in for the summer Hembree & we’ll have the big wheels rolling in October again.
----------
And again, thank you everyone for all your kind thoughts & words regarding our dear little Motormouse.  Even had comments from as far away as Australia & New Zealand.  We are missing our little Mouse so much & I think it is probably going to impact me more when we get home.