A FEW SAD MEMORIES & THEN IT WAS ON WITH THE DAY 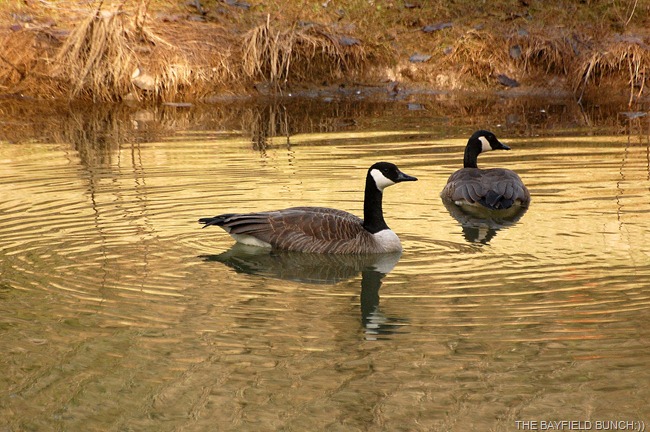 CANADA GEESE ON GOLDEN POND
It was one week ago this morning we started our long journey home from our digs in Congress Arizona. Already it seems like so very long ago & our memories of Arizona House seem so very far away. This past week will always be remembered as a sad journey, having just lost our dear sweet little Motormouse. It is nearly one year now that we lost both Checkers & Max as well. I quietly sit in my chair waiting for another day's sunrise. Soft music filters through the darkness. The glow of a computer screen casts a pale light onto my keyboard. The whirlwind week has finally caught up with me. It is a time for reflection. It is a time for sadness. Sensing my sorrow, a little doggy face appears out of the darkness beside my chair. A ray of sunshine on a darkened morn. Pheebs cold little nose nudges my hand as if to say, 'it's alright Dad, I'm here now’. 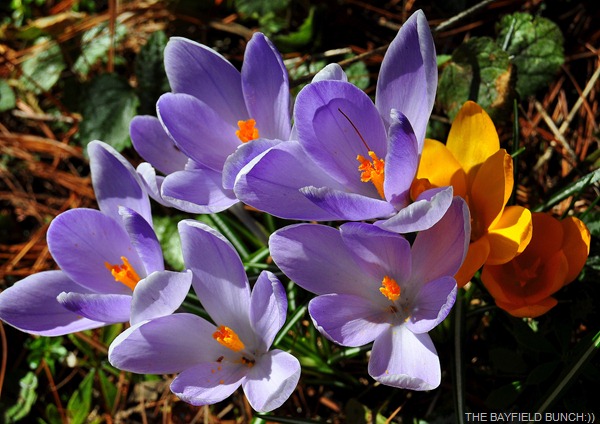 SPRING CROCUS
But, not to worry. I will not let the sadness get me down. It is a new day, a new sunrise. Things to do & tasks to be attended to. It’s Saturday morning & Saturday mornings have always been my favourite time of the week. Now, what goals will I set for myself today. Let’s start by finding my socks. Oh, that Pheebs!! 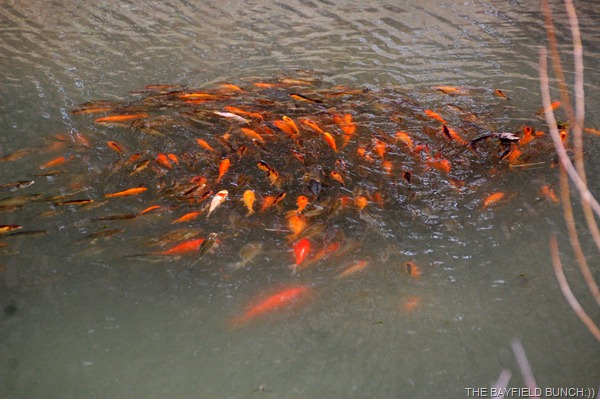 MANY LARGE GOLDFISH IN OUR PARK’S POND ACROSS THE ROAD FROM US
Heard my first Northern Flicker & Red Wing Blackbird this morning. Buried my first Red Wing Blackbird too. Flew into one of our sunroom windows & died instantly. Bird feeders are up & loaded with seeds. Today’s visitors included Blue Jays, Cardinals, Red Wing Blackbirds, Black Capped Chickadees, Grackles, & Yellow Finches.  I did see a black Squirrel scamper up a nearby tree with a peanut in it’s mouth so the Squirrel wars are about to begin for another season. A FEMALE COMMON MERGANSER SKIDDLES ACROSS THE POND
Kelly & I headed off to the town of Goderich on some errands. Stopped at McDonald’s to check out the new renovations. Looked up at the menu & saw the Burritos. Thought of Motor & I coming to McDonald’s last summer for our Burrito fix. Had ourselves a coffee & moved on. Big bag of wild birdseed at TSC. Couple more stops & we got ourselves right the heck out of town. It’s Easter week-end & the stores & streets were full of humanoids flopping around everywhere. I may never return to Goderich ever again. But, then again…… 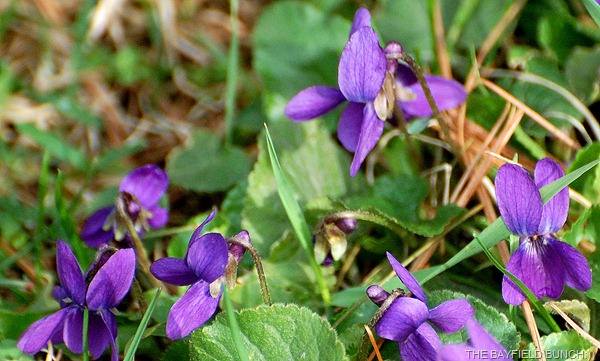 And a note to my fellow Facebookers. I have been receiving some ‘Friend Requests’ lately & I thank you folks for your interest. But, I have not accepted them because I am afraid of getting ‘hacked’ again. I accepted a Friend Request’ a few months ago which turned out to be a jerk who hacked my account & began sending out spam messages for some money scheme in my name. For that reason & that reason alone I do not accept Friend Requests anymore. Nor do I accept or participate in any gaming stuff or any requests of any kind for anything. I simply do not trust Facebook to protect me from the scum bag low life creeping around the internet looking to do damage to others.

AND SHE TAKES TO THE AIR
We use Google’s search engine here & I particularly like Google’s, Google Earth. I think this company has made numerous positive strides forward in the past bringing many great programs & applications to bear but I am also beginning to wonder if the great Google Monster is quickly outgrowing itself & morphing into something well beyond it’s own common sense. There has been a lot of buzz around lately about the new Blogger dashboard, etc. This is a good example of what I fear to be coming down the pike. Google is beginning to act like a frantic Bull in a china shop as it links this to that & that to this. Could the easy blogging format as we know it be on the way out. Already annoying changes have been made to the ease of Picasa’s Web Album features, not to mention the Dashboard, etc. Could Picasa’s easy to use photo editing program be under scrutiny for change? I don’t hear much about the highly touted Google+ anymore. Has it fallen on it’s face or am I just too far out of the great Monster’s social loop now. I know of two Blogs that have totally & unexplainably disappeared off the internet recently. Just vanished. Owners went to access their blog and they were gone. I’m sure there are others. Is this a result of Google’s ongoing changes. Will our blogs at some point go the way of great Dinosaurs & disappear to make room for some new wave of Google techno pop culture. Google is a major profit driven company & I wonder what expense & damage they will cause in their charging pursuit through the china shop in quest of their golden idol bottom line. I don’t know, I’m just thinking out loud & asking a question or two. Oh, just my humble opinions of course…….. 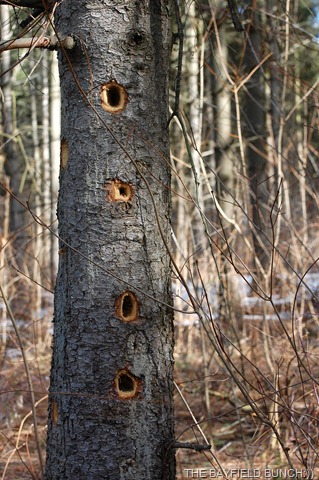 <<< A WOODPECKER HAS DILIGENTLY BEEN WORKING ON THIS OLD PINE TREE
And, here’s something to keep in mind. Remember to check your Spam folder in your Blogger Dashboard on a regular basis because you could very well have reader’s comments in there that never got published. Received an email awhile back from a reader wondering why we had not published her comments. Turns out they were all sitting in our Spam folder. Kelly just found all those comments yesterday & published them. Also found a comment from Karen & Steve that had not been published. So, might be a good idea to get in the habit of regularly checking your Dashboard’s spam folder. 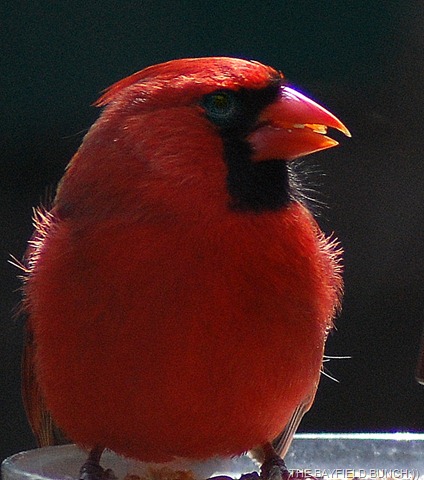 <<< MALE CARDINAL AT ONE OF OUR FEEDERS
And for you 5th wheel owners in our area. Most of you probably know by now that top of the line CARRIAGE has closed it’s doors, ceased building it’s prestige's 5th wheel trailers & gone out of business. Doesn’t mean their product is any less. Just means they had some management problems. STORMRUNNER RV SALES & SERVICE here in Bayfield has about half a dozen Carriage 5th wheels left. With a special extended warranty on the units you are probably not going to find any better deals. No sales people at Stormrunner. When you deal here you deal directly with Harry & Dianne, the owners. No middle people, no commissions, no hype & no pressure. No baloney:)) They have decided to replace the Carriage line with Thor Industries REDWOOD 5TH WHEEL line. Dianne & Harry are friends of ours & we know they will treat you fairly. Tell em the Bayfield Bunch sent ya:))
46F in Bayfield today & 75Fin Congress Arizona:)) 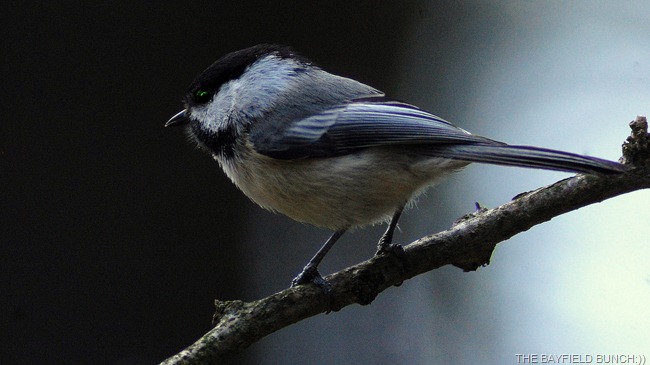 BLACK CAPPED CHICKADEE
GROANER’S CORNER:(( A very religious man lived right next door to an atheist. While the religious one prayed day in, day out, and was constantly on his knees in communion with his Lord, the atheist never even looked twice at a church.
However, the atheist's life was good, he had a well-paying job and a beautiful wife, and his children were healthy and good-natured, whereas the pious man's job was strenuous and his wages were low, his wife was cheating on him and his kids wouldn't give him the time of day.
So one day, deep in prayer as usual, he raised his eyes towards heaven and asked: "Oh God, I honour you every day, I ask your advice for every problem and confess to you my every sin. Yet my neighbour, who doesn't even believe in you and certainly never prays, seems blessed with every happiness, while I go poor and suffer many an indignity.
Why is this?" And a great voice was heard from above ...
"BECAUSE HE DOESN'T BOTHER ME ALL THE TIME."
---------------------------------------------------------------------------
- Tourists see the world, travelers experience it.
- Home is where your pet is:))
- The only thing better than right now will someday be the memories of right now...AL.
stargeezerguy@gmail.com
Posted by Al Bossence at 4/07/2012