ANOTHER GOOD OLD COW SMOOCHIN DAY FOR THE PHEEBS 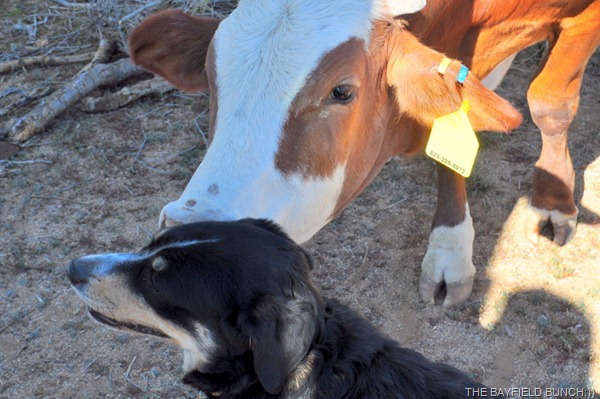 Sitting outside basking in the early morning sunshine I couldn’t help but think, ‘what a difference a day makes.’  Friday morning we had howling winds & freezing temperatures & this morning the warming air had a silent stillness to it.  Birds were in the air & the view over our Mesquite filled shallow valley made one want to just stay right where we are without moving again for awhile.  I have a feeling that when we do leave it will be straight home for us & we will save Monument Valley for the Autumn beauty which I would much prefer to see if we can get away earlier this Fall.  Already have my fingers crossed:)) 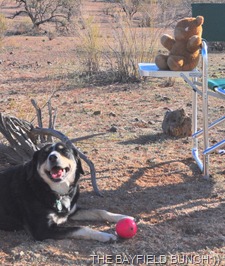 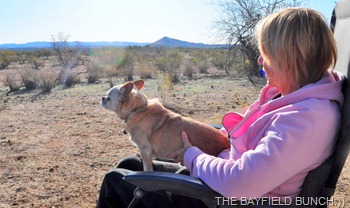 I was at the rear of the rig putting something away in a bin when I heard a slight scuffling behind me.  Turned around to see a dozen Cows at the front of the Motor Home, all standing staring curiously at the Pheebs a few feet away.  Well, it wasn’t long & the heads were together again, noses touching for another round of big slurpy Cow smooches with the  Fabulous Pheebs.  She walked around amongst the small herd with a big smooch here, a small smooch there, a few nose bumps & some downright comfy snuzzles.  Twenty minutes later the Bovine Bunch had disappeared once again into the surrounding Mesquite trees & a good time had been had by all. 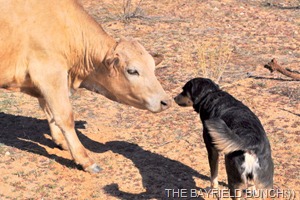 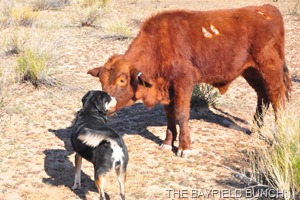 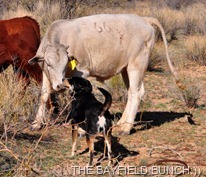 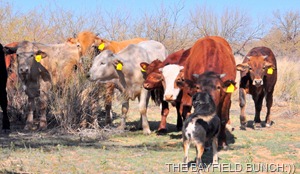 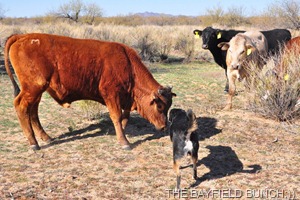 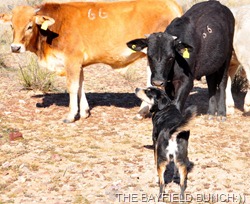 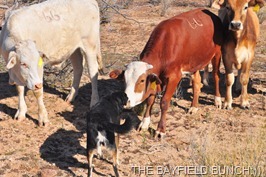 At 11:45 I Jeeped myself up to the highway & opened the gate.  Parked the Jeep where it was visible to southbound traffic, focused my binoculars northward on the oncoming traffic & watched for a white van towing a little white Casita.  Yep, there it was alright, heading down the highway right for us.  A minute later with a left turn signal going, the van slowed & made a wide turn through the gate.  Yaaay, RV SUE & HER CANINE CREW had made it.  Really great to see Sue again.  She is one of our favorite people:))

COULD THAT BE RV SUE & THE CREW WAY DOWN THE ROAD? 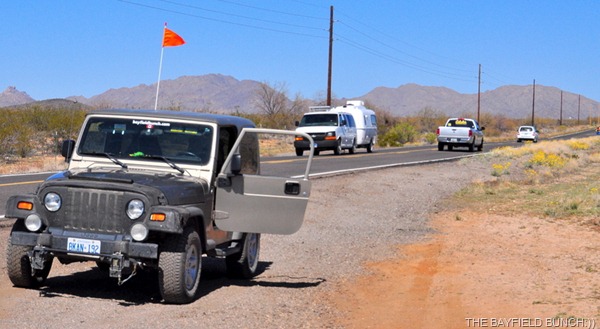 I led the way as Sue & the crew followed us back into the desert on a hard packed sandy & sometimes bumpity road.  It’s a big area here & Sue found herself a real nice spot with lots of trees & birds.  And, lots of room for Spike & Bridget to get out & really rip & tear.  No cactus in this area so no prickly stickers to run into.  Pheebs spotted us & came running down the hill likkity split to see her old Pals, Spike & Bridget.  Spike was so happy to see Pheebs he was bouncing around upside down with squeals of delight.   I don’t like to bother people when they are setting up so I loaded up Pheebs in the Jeep & we bounced our way back up to our rig.  We’ll see Sue & the crew in the morning.  All is well in Boondockerville:)) 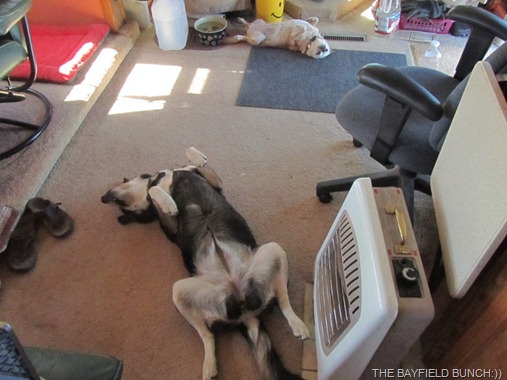 KIND OF A LAZY UPSIDE DOWN 2 DOGGY DAY

Rest of our day was spent just totally enjoying the fine weather.  No urge to go anywhere or see anything.  Just nice to kick back in our loungers & drift off to sleep in the warm Arizona sun. 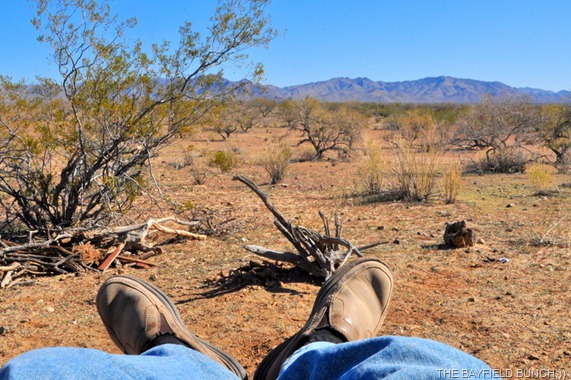 Found it interesting reading the CAVE DWELLINGS post Friday when Donna mentioned about having to put up with noise levels once they return home to Illinois.  I am very much bothered by noise as well but do not remember that as being the case until we started RVing a few years ago. 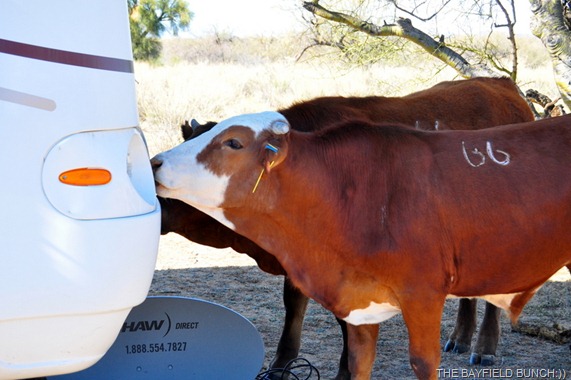 GETTING THE BUGS CLEANED OFF THE FRONT OF THE RIG

I first began to notice my noise annoyance after having spent our first winter in the southwest boon docking in the quiet desert.  Up to that point, every day noise was just that, every day noise.  Like most folks I really didn’t take much notice of it I guess.  But, with each winter’s time spent in our quiet desert boon docking spots I soon became aware of unwelcome noise.  People noise!!  When one spends pristine quality time with soft winds in the Saguaros & tweeting songbirds birds in the Palo Verde trees it’s pretty hard to have the patience for people generated noise.  But, here’s an odd twist.  I don’t mind the thunderous roar of jet aircraft in the overhead sky & yet somebody’s radio turned up or a bunch of people hootin & hollerin just drives me bonkers!! 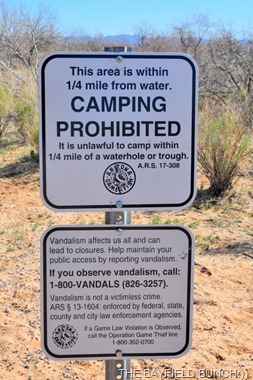 THIS IS THE NEWLY POSTED SIGN IN OUR AREA

Our Sitemeter told me tonight we have hit the half million visitor mark on our Blogsite.  How well I remember starting out a few years ago with no visitors at all & I remember how great it was to see 2 or 3 hits on the site those first few days & weeks.  It was a slow start for quite awhile & I think it was Laurie from SEMI TRUE TALES OF OUR LIFE ON THE ROAD who stumbled across one of my posts way back when & mentioned the Bayfield Bunch in her blog that began the ball rolling.  My Google stats tell me most of our site referrals come from HITCHITCH so my advice to new Bloggers is to get yourself on Hitchitch to increase your blog’s traffic flow.  Probably the biggest boost our site has had came from meeting TIOGA GEORGE a few months ago.  His mention of the Bayfield Bunch in his blog nearly doubled our daily Sitemeter visits.  Our numbers literally shot up over night & amazingly enough have remained there.  Tioga George has had over 6 & a half million visitors to his site.  So, a big thank you to all my fellow Bloggers who have helped us along the way & pushed our Sitemeter numbers to the half million mark. 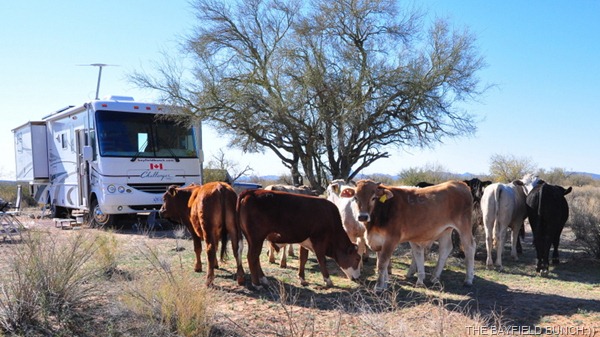 No word yet on the property ker-fuffle at the house on Ghost Town Road but I expect we’ll hear something from the Realtor this coming week. 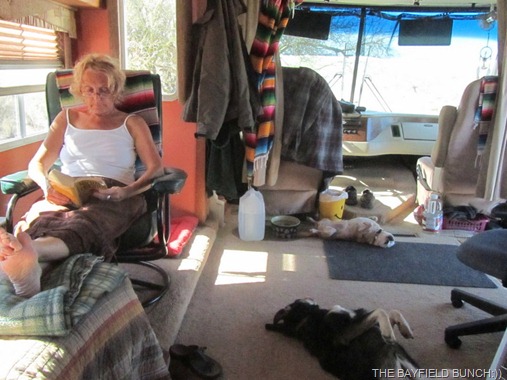 GROANER’S CORNER:(( The sheriff pulled up next to the guy unloading garbage out of his Class C motorhome into the ditch in Kentucky. The sheriff asked, "Why are you dumping garbage in the ditch? Don't you see that sign right over your head".

"Yep", he replied. 'That's why I dumping it here, 'cause it says 'Fine For Dumping Garbage'".