A SECOND LOOK AT SOMETHING, & 3 RVING BLOGGERS IN ONE DAY:)) 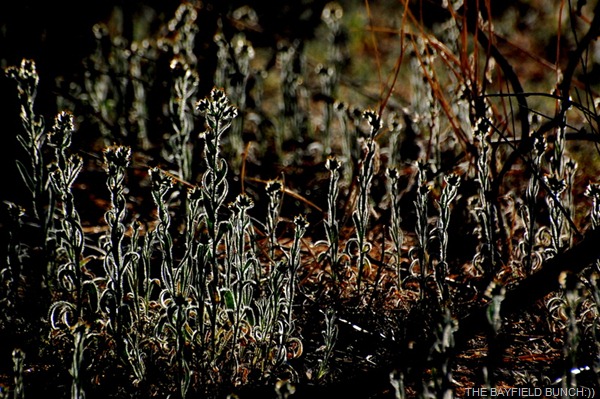 MORNING FLOWER STOCKS
We had battened down the hatches Sunday night in anticipation of a predicted storm rolling into the area during the night.  Never happened & we had another beautiful morning on the go.  Wind did pick up & blow my hat off a few times but we didn’t get any of the predicted rain.  But, we’re battening them down again tonight. 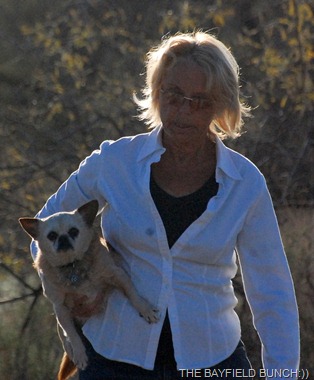 Sometimes on our morning walks Kelly has to carry the little Motormouse, not because the ground is covered with sharp rocks which hurt her paws, but because every time Kelly puts her down she attempts to eat every cow plop & pile of horse buns she can find!! 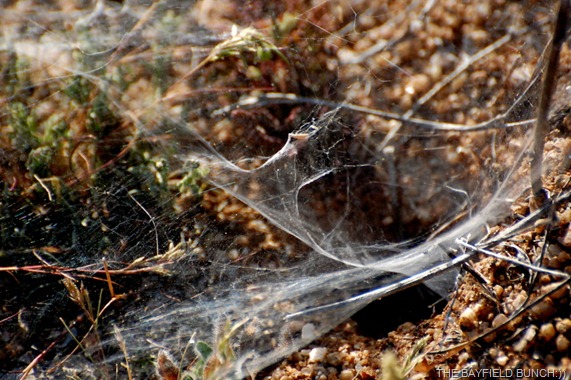 I’M SEEING THESE HOLES IN THE GROUND WITH A WISPY SPIDER LIKE WEB OVER THE TOP…COULD THIS BE A TARANTULA’S LAIR??
Stopped on the way over to see RV SUE & HER CANINE CREW this morning & had us another look at the house for sale we had looked at last week that I tagged as not having the WOW factor.  We’re pouring a little more serious thought into that & know we could WOW it up ourselves.  Going to have a look at the inside Wednesday. 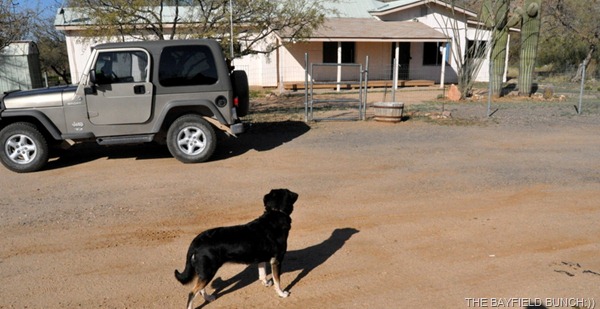 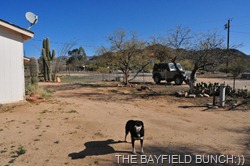 TAKING A SECOND LOOK AT A HOUSE WE SAW FOR SALE LAST WEEK
Took us a wee bit of looking through the cactus & mesquite but we did manage to finally locate Sue & the Crew tucked snugly away under a shady Mesquite tree.   Fellow RV Blogger Gaelyn from GEOGYPSY was already there so we met another Blogger too.  So nice to see Sue again & Pheebs was happy to be kibitzing with Spike & Bridget.  Wind was howling pretty good so we all barreled inside Sue’s Casita.  The Casita may be small compared to a big 40 foot diesel banger but we all had lots of room inside, including the 3 furry critters.  We poured over a map discussing roads & routes in the area. 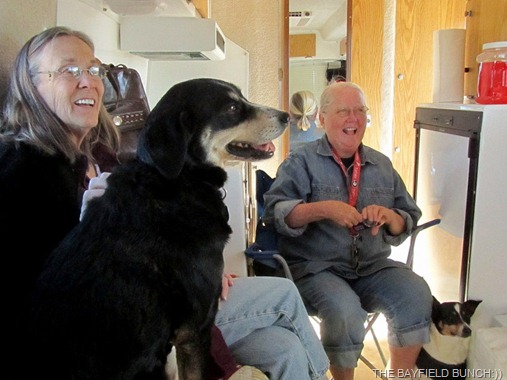 GAELYN, PHEEBS, SUE & SPIKE
It was a complete coincidence that Sue ended up camped only about 3 miles from where we are.  Guess that just means great boon docking minds think alike sometimes.  She’s got herself a nice cozy little spot & we’ll probably have us another chin wag before we depart the Valley sometime in March.  Gaelyn spends her winters in Yarnell & summers at the North Rim of the Grand Canyon as an interpretive Ranger leading educational hikes & talks about the area. 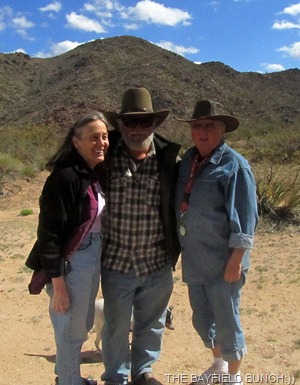 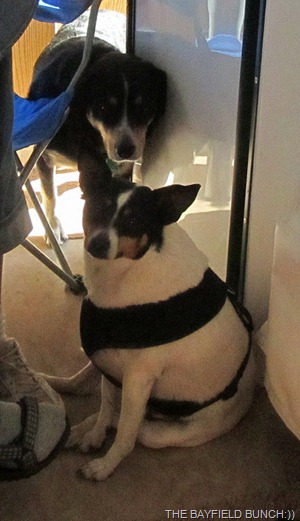 DAAAAAD,..... BRIDGET WON’T LET ME PAST
We left Sue’s site about 11:45 & headed back to our rig to drop off the Pheebs & grab us some lunch.  An hour later we were on the road again heading for NORTH RANCH. 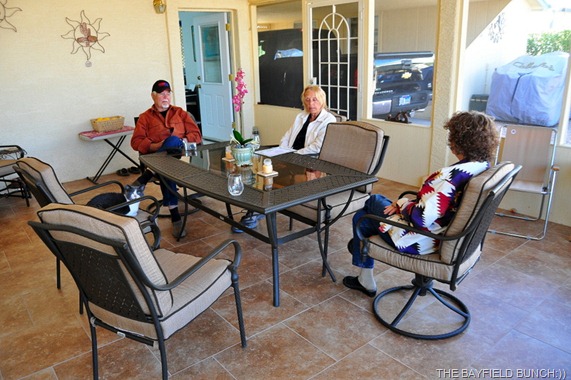 What a pleasure it was to meet Mike & Pat from MIKE & PAT'S TRAVELS.  Mike & I have been reading & commenting on each other’s blogs for the past 3 or 4 years.  Pat has been reading our blog regularly as well.  Two truly nice people who Kelly & I felt very comfortable with.  It was so nice to see their great southwest home in person after seeing Mike’s photos over the years.  Pat invited us over for supper next week so I’m hoping she’s planning on a big mess of peanut butter sandwiches:)) 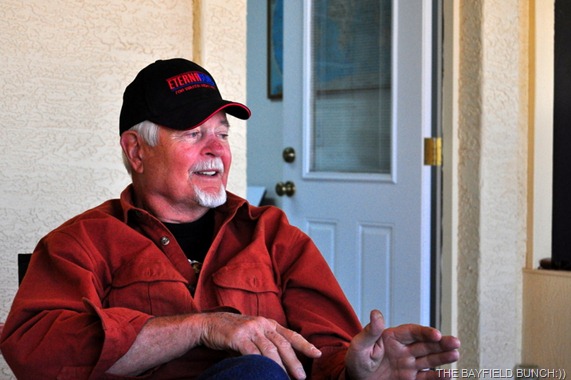 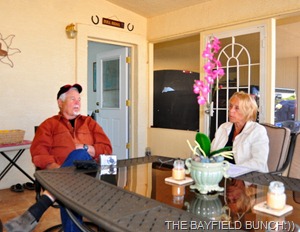 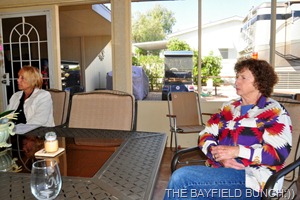 Our winter travels are rapidly winding down for another year & I couldn’t help thinking today that a month from now we will probably be well on our way home or maybe even be there by now. Always a mixed bag of feelings for me every year. But, not to get ahead of myself. We have a month of travels left to look forward to so no point in projecting myself that far ahead…….. 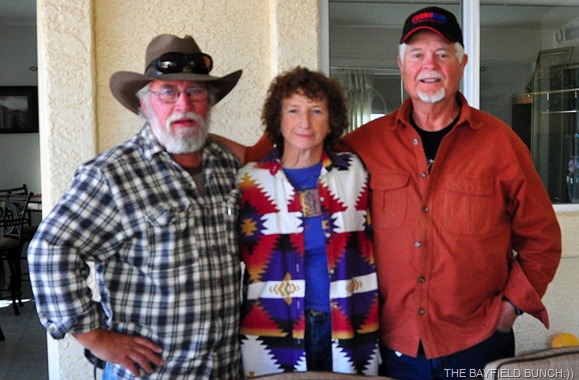 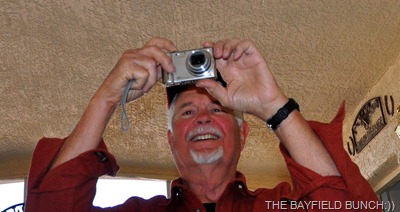 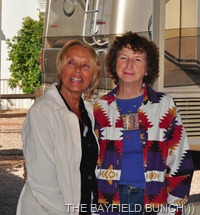 Some new Blog Followers to welcome tonight.  DAYTON C, KATHY DETWEILER, LOU'S LIFELINES, & Gaelyn  from GEOGYPSY.  Thanks for dropping by folks.  Always nice to have new people aboard:)) 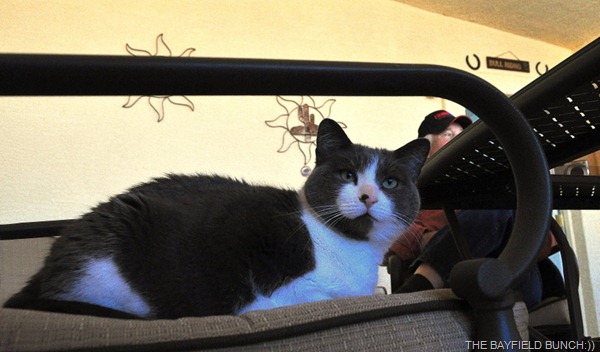