A HOT DOG AT THE HOG TROUGH 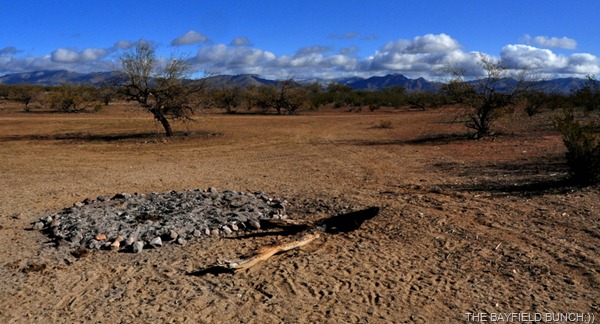 A TOUCH OF SNOW VISIBLE IN THE WEAVER MOUNTAINS…(center)

I did hear the soft pitter patter of rain in the night but don’t think it lasted long & by morning light the winds had packed up & gone home as well.  A heavy cloud cover sat atop the Weaver Mountains to our northeast & temps were down to 39F.  Nice light dusting of snow on the mountain tops when the clouds later lifted giving way to deep blue Arizona skies…..and warmer temps.  Ya just gotta love winters here in this ever beautiful scenic southwest:)) 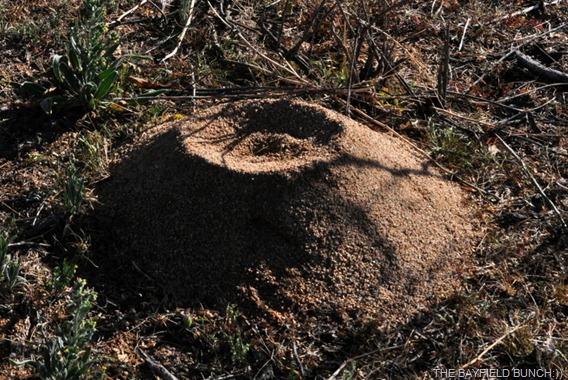 SURE HAVE SOME LARGE ANT HILLS OUT HERE IN THE DESERT

Didn’t have any photos from the Wickenburg Cowboy Museum last week because photos are not allowed. However, on the basement level there are displays of artifacts depicting the life & times of a bygone era. Photos were allowed there so I have included them in today’s blog. 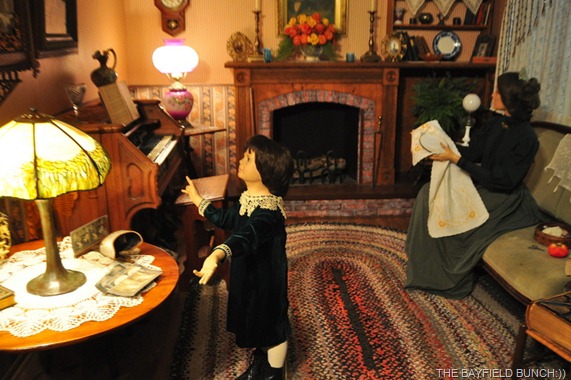 Headed into Wickenburg & bombed around for a bit today.  Located the County Park we had heard was great for boon docking at $2 a night.  Nice spot because it is located on a hill overlooking the town & it would be pretty at night.  I liked it here because it isn’t just another flat old boring parking lot with a bunch of RV’s jammed together.  Sites are randomly scattered about on various levels of the hill with lots of space between most of them.  No problem for bigger rigs.  Roads & sites are hard packed sand so if you don’t like a little dust on your shoes or tires you might want to go looking for a flat cement pad somewhere. 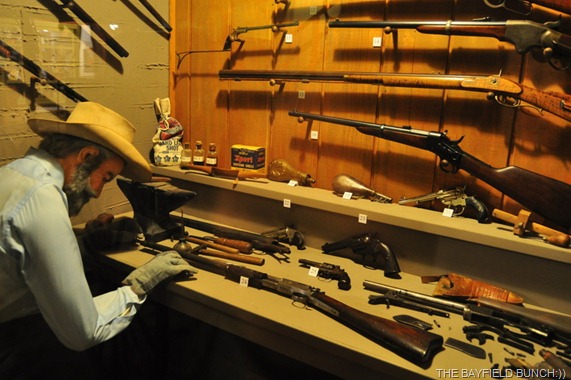 Wickenburg streets are a little willy nilly & kinda hilly.  They have a couple traffic circles that will grab your attention but other than that it’s pretty easy to get around.  No high rise buildings & I like all the southwest colors they use in their construction.  Even a movie theater downtown right across from the Hog Trough. 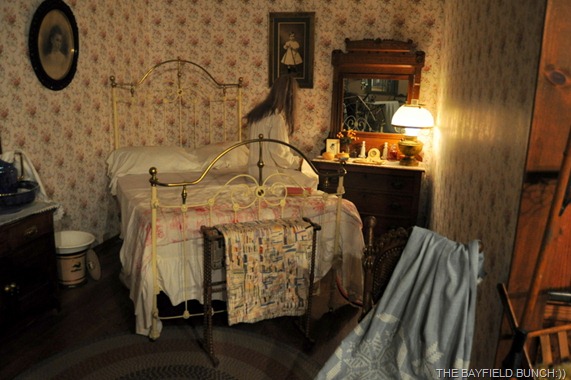 The Hog Trough Smoke House is where we grabbed a bite to eat just before noon.  They are known for their BBQ stuff.  Kelly had something called brisket & ribs which she really liked.  Say, did I ever tell you I’m not crazy about that ‘smoked meat’ taste or anything dunked in or slathered heavy with BBQ sauce.  Yep, I played it safe again & stuck with a hot dog & ketchup:))  You can easily see why I never offer any food opinions in my blog.  How can a person be credible when they think a hot dog & ketchup is about as good as it gets.  Yep, that’s what I had alright:)) 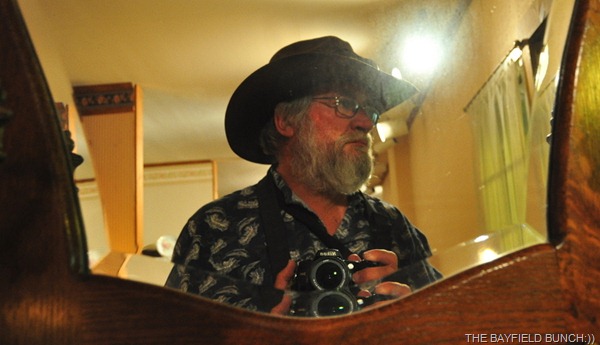 OOOOPS, CAMERA MISFIRE IN A MIRROR

From the Hog Trough it was on to a western store called Double D.  Kelly was wanting to have a look around so figured I’d do the same.  I wasn’t in there but 3 minutes when I had myself a look at a belt.  Price tag said $59!!!!  Without further ado I immediately wheeled around & exited the store, hurried to the Jeep, jumped in & locked the doors.  That belt price really scared me!! 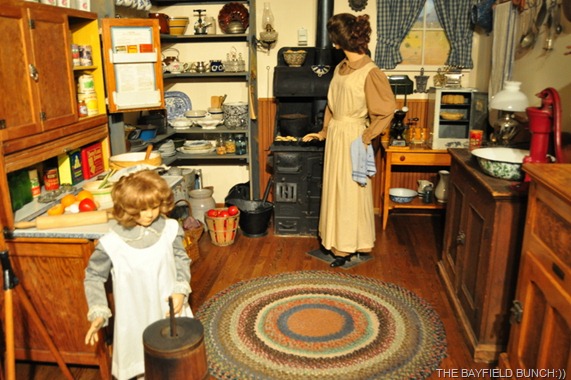 Safeway was next on our list so I went along & hung myself off the end of a shopping cart for half an hour.  Grocery shopping is not really my favorite thing but after the Hog Trough bill & subsequent scare in the Double D store I figured shopping for a few groceries would be a good place to hide out for awhile until I got myself back together again.  From there it was a quick stop at the Bank Of America.  Kelly went in & I stayed in the Jeep.  I don’t do Banks anymore.  Too many people in suits walking around mumbling to themselves in those kinds of places. 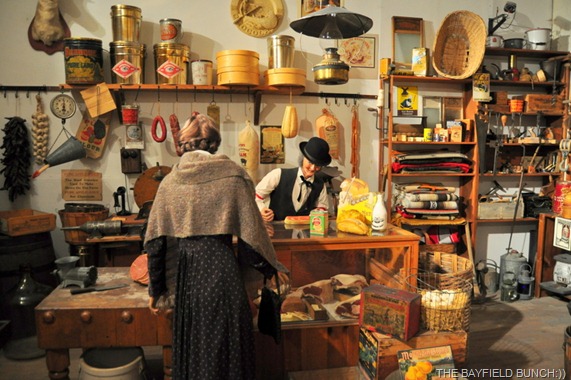 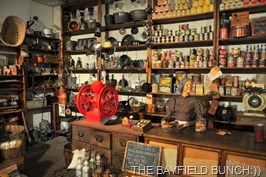 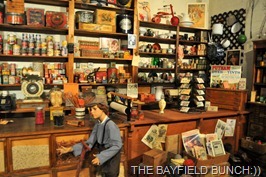 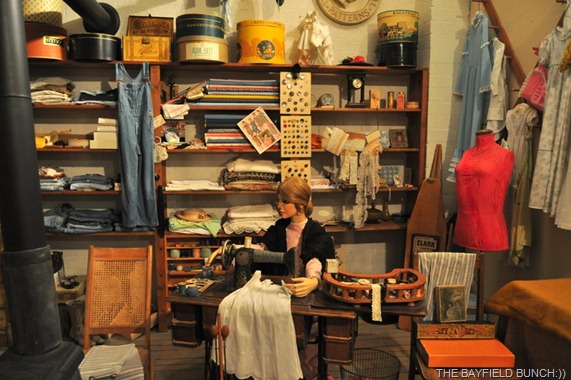 A LOOK BACK INTO AN OLD COUNTRY STORE

We were back out into the refreshingly quiet desert sometime after 1 p.m.   Nice to touch base with the cows & horses again after an hour or two in town.  But, don’t get me wrong…..I do like this Wickenburg place:)) 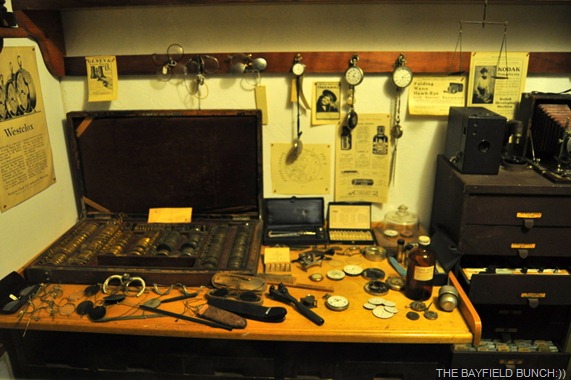 After reading a fellow RV’ing friends account of being stuck in sand with their Motor Home I am reminded of decisions we have to make whenever we are out Jeeping in the back country. Roads can turn into mere trails or pathways pretty quick & over every rise & around every corner awaits new surprises. Can we make it over those rocks ahead safely & without damaging the Jeep? What about that steep up or downhill embankment or through that narrow space between a couple Mesquite trees? Is the sand too soft in a wash ahead & are those sharp protruding rocks ahead going to shred our tires? The young guy who still lives within me says, 'ya, no problem just go for it' but the older guy who lives here now as well says, 'no, this is not a good thing.' Luckily, most of the time I listen to the the older wiser guy instead of giving in to that younger smart aleck kid who was always full of beans & gunpowder. But, you know what, I still get the urge once & while to smoke those rear tires up & do a few doughnuts in local parking lots. Oh ya & run the Jeep right over those huge boulders ahead too….no problem!! 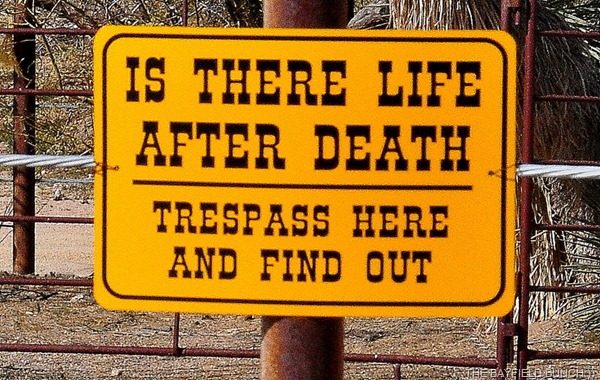 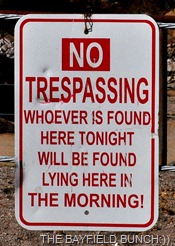 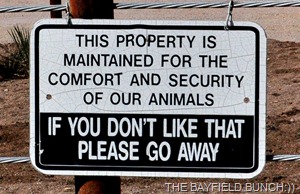 SAW THESE SIGHS ON A FENCE NEAR THE WICKENBURG  COUNTY PARK

GROANER’S CORNER:((   Two sisters, one blonde and one brunette, inherit the family ranch.
Unfortunately, after just a few years, they are in financial trouble. In
order to keep the bank from repossessing the ranch, they need to purchase a
bull so that they can breed their own stock. They hear about a bull for sale
in Abilene and decide the brunette sister will drive out to check
out the animal. Upon leaving, she tells her sister, "When I get there, if I
decide to buy the bull, I'll contact you to drive out after me and haul it
home."
The brunette arrives at the man's ranch, inspects the bull, and decides she
wants to buy it. The man tells her that he will sell it for $599, no less.
After paying him, she drives to the nearest town to send her sister a
telegram to tell her the news. She walks into the telegraph office, and
says, "I want to send a telegram telling my sister that I've bought a bull
and I need her to hitch the trailer to our pickup truck and drive out here
so we can haul it home." The telegraph operator explains that he'll be glad
to help her, then adds, "It's just $.99 a word." Well, after paying for the
bull, the brunette only has $1 left.
She realizes that she'll only be able to send her sister one word. After
thinking for a few minutes, she says, "I want you to send her the word
'comfortable'." The telegraph operator shakes his head. "How is she ever
going to know that you want her to hitch the trailer to your pickup truck
and drive out here to haul that bull back to your ranch if you send her the
word, 'comfortable'?"
The brunette explains, "My sister's blonde. The word's big. She'll read it
slowly: com - for - da - bul."