‘EAST JESUS’ SCULPTURE CENTER & AT THE EDGE OF THE SALTON SEA 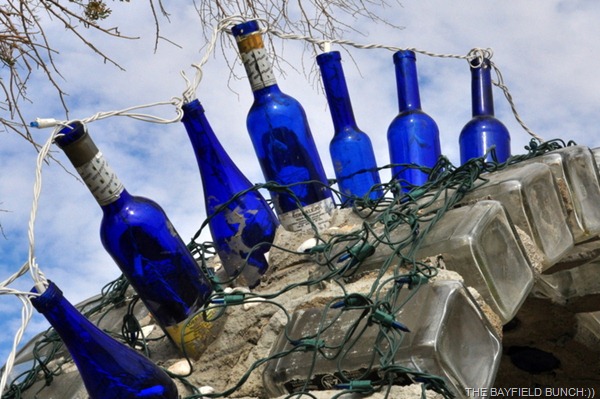 I think it was the heavy wind gusts around 3 a.m. this morning that blew all the barking dogs away.  Took the Rooster with it too.  But, it didn’t derail the train whistles over near Niland. 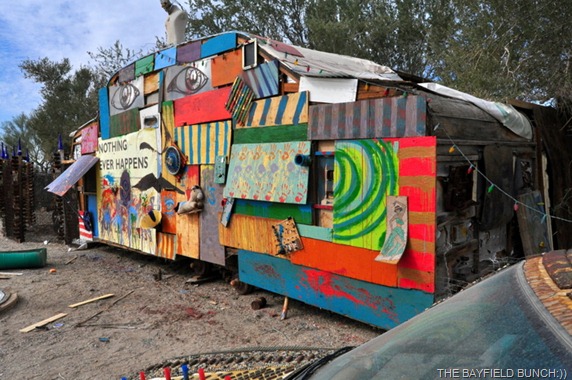 Many sounds in the night here at the Slabs.  With the background hum of hundreds of generators chugging away there is the occasional whoop & holler piercing the quiet desert sky.  Of course the barking of numerous Pit Bulls & baying Hounds only adds character to the Slabs cacophony of sound.  Despite itself, ya just gotta kinda love this silly place. 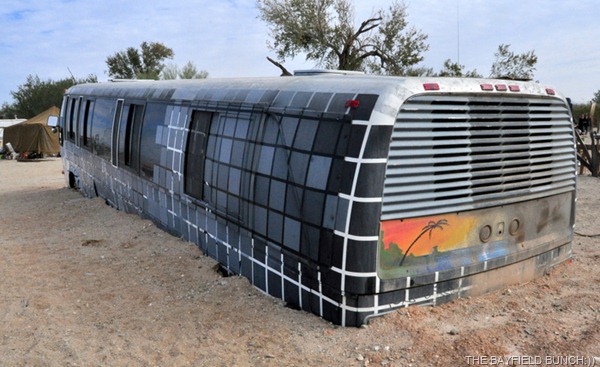 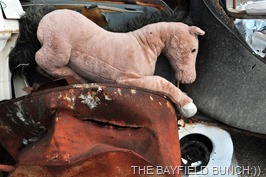 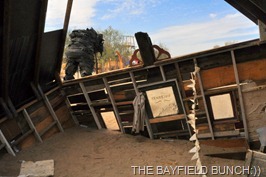 I, like many others was appalled the first time I drove the old dusty road into Slab City. All I saw was junk. Or, was it junk. Well yes, there’s a lot of junk alright but there has always been a fine line between junk & art. It is all in the eye of the beholder of course. Having worked in an art gallery for a time years ago I do understand the fine lined controversy. Many times I had to help set up so called bonafide ‘artwork’ that I found, well, certainly not my idea of artwork!! But, there’s the rub. What constitutes art!! Some of the folks here at the Slabs are very artsy oriented & their little slice of heaven certainly reflects their creative nature. Others, not so much. 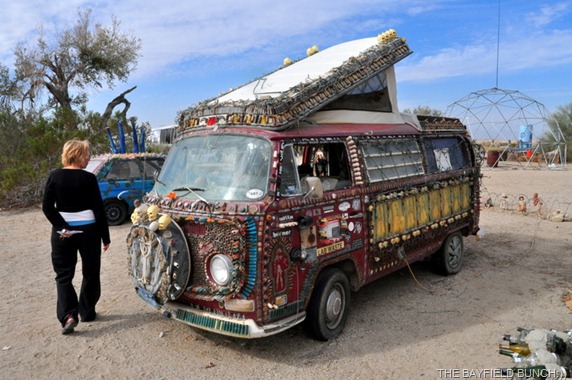 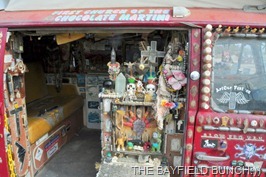 One such fellow here at the Slabs was Charles Russell who recently died at the young age of 46.  He called his swatch of treasured ground, THE EAST JESUS SCULPTURE CENTER.  A brochure states…Not a Religion. Do not Worship.  Many of my photos today are from the Sculpture Garden.  Here’s an interesting article on the passing of Charles Russell and what it means to his past efforts. 'EAST JESUS' DESERT ART PROJECT IN PERIL. 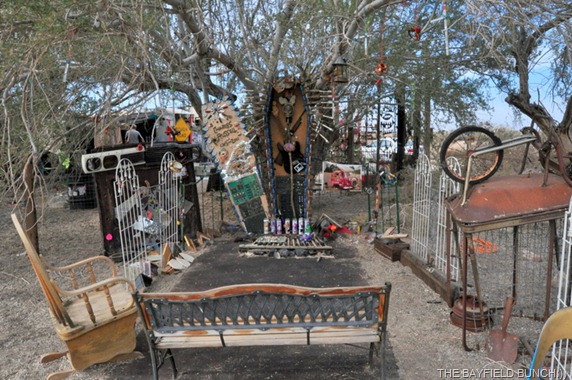 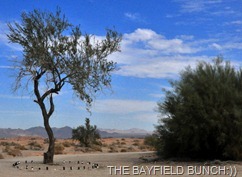 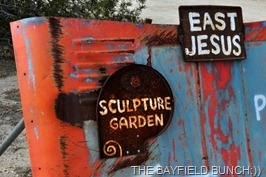 A couple of commenter questions.  ROD wondered how the full time Slabbers feel about Snow Birders like ourselves rolling into their neighborhood.  Not being here long enough to accurately answer that question I can only make an assumption based on our limited stay.  All appears well.  There seems to be an area of long & hard time Slabbers concentrated in a section somewhere kind of in the middle of everything.  Kind of like a rough neighborhood section found in any city.  There may be some friendships between Snow Birders & Slabbers but I don’t think the two groups regularly hang out with each other.  The Slabbers, for the most part are loners & stick to themselves.  Birders have a tendency to flock together & frolic, regardless of where they are. 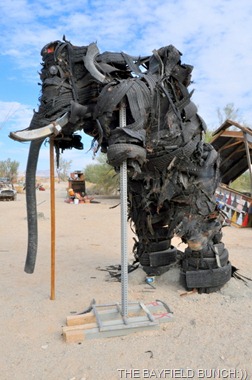 Here, in part is neighbor Rene’s take on it… “To answer your reader's question about whether or not the permanent residents hold grudges against the snowbirds, I'd have to say that for the most part they don't. Everyone here has a live and let live attitude and as long as nobody is hurting anyone or getting into each other's way, everything is copacetic. The Slabs has a mutual respect among most visitors of every economic means, that is so unusual in this country. It's refreshing.” 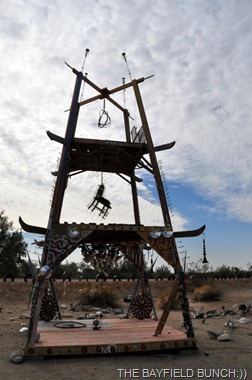 No official rules or regulations here at the Slabs but there are unwritten laws and we have heard of vigilante justice for anyone caught stealing, etc.  And, there has been some unaccountable deaths here!!  It comes with the drug trade and wherever you have groups of people these days you are going to have a drug problem, & the consequences that type of lifestyle deals out.  Unfortunately, in today’s deteriorating society, it’s just the way it is:(( 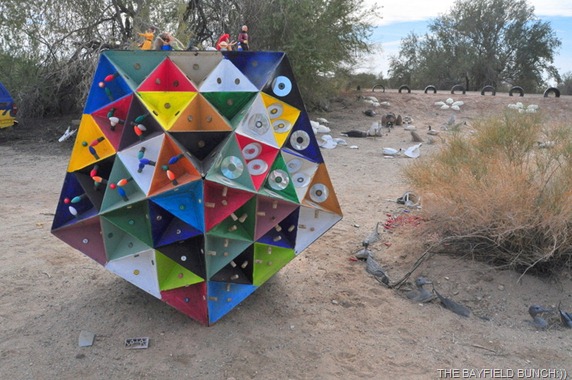 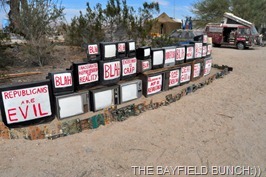 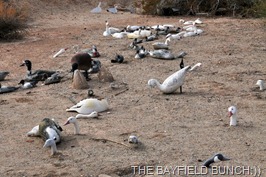 A couple of other commenters wondered about comparisons between Slab City & Quartzsite.  Quick two word answer….no comparison!!  The Slabs & the Q are entirely two different places.  Quartzsite is host to the largest annual commercial gathering of RV’s in the United States.  It revolves around the normal little town of Quartzsite Arizona & caters to the needs, whims & fancies of countless RV folks once a year who flock there in pursuit of everything from soup to nuts.  Anything an RV’er needs, wants or dreams of can be found in Quartzsite.  New friendships are formed, old friends reunited.  Clubs & groups gather in large numbers for all the social festivities and the whole area takes on a Carnival like atmosphere.  Thousands of people coming together to have fun.  And, may I quickly add…..the overall majority of these fun loving folks are Seniors.  Whether buying or selling, they are all here:)) 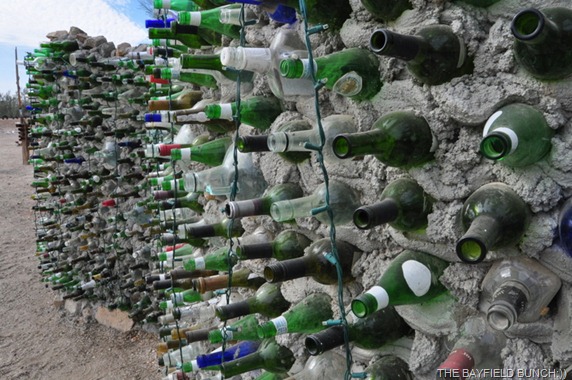 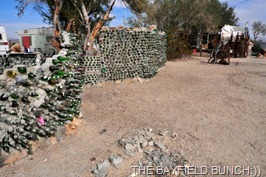 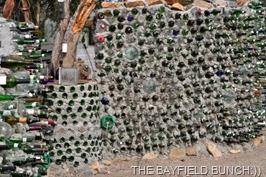 Slab City is a whole different kettle of fish.  No carnival atmosphere here.  If there is any buying or selling of anything it is likely done quietly behind closed doors.  Nothing commercial at the Slabs except for Solar Mike at SUN WORKS.  No eateries, no car washes, no stores of any kind.  No stop signs, no lane changes, no problem.  Just a bunch of loner oriented folks living freely on the land with no taxes, no utility bills, no mortgages & no desire to be part & parcel of today’s so called normal society.  These Slabbers are here to stay.  If someone has suddenly disappeared out of your life, workplace or neighborhood at some point, there is a good chance they are now quietly & contentedly living here somewhere in the confines of California’s Slab City.  Maybe under a cardboard box, an old school bus or a finally crafted abode made from the finest scrap to be found anywhere west of the Mississippi. 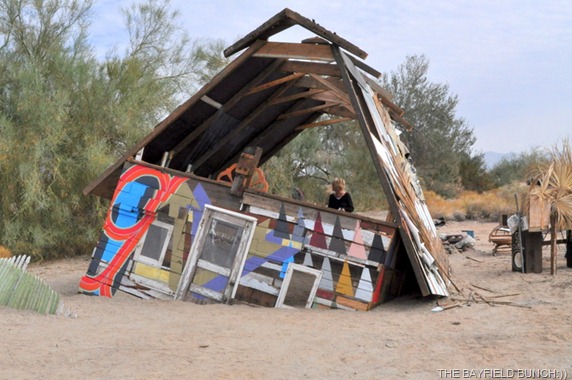 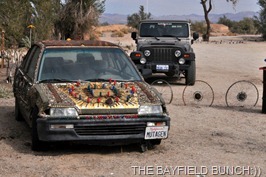 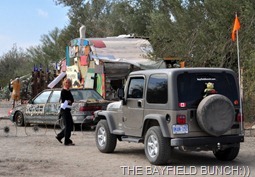 The winds kept up their ferocity for the entire day blowing mini sand storms across the landscape.  Most folks stayed confined to barracks & rode out the heavy wind gusts.  Kelly & I went looking for natural thermal mud pots in the ground known to be south west of here.  Didn’t exactly find them but know where they are for next time. 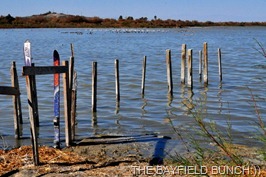 Our mud pot search led us to the southeastern edge of the Salton Sea & what looks like our next boon docking area in a few days.  Met a nice California couple just heading home.  They enjoy this spot saying there are never many people there.  Our favorite kind of place.  They told us huge flocks of Pelicans arrive from Mexico each night at sunset.  Coincidentally met another fellow there who had camped near us last night in his really neat camper van. 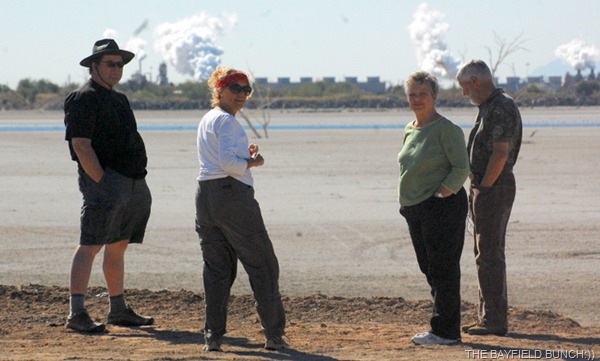 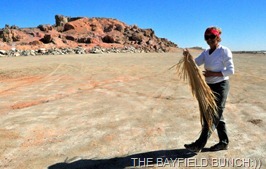 Groceries in Calipatria before popping into a little Mexican restaurant for a bite to eat.  Fortunately, they had hamburglers on the menu so I was spared any of that ‘burn your face off’ Mexican food.

Back at the Slabs we spent the rest of the warm sunny day inside out of the howling desert winds……..10-4:)) 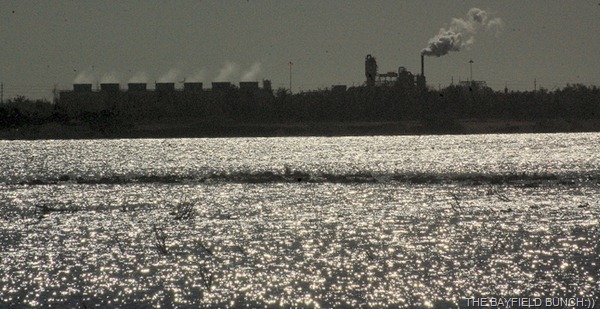 THERE ARE MANY GEO THERMAL POWER PLANTS IN THIS AREA

GROANER’S CORNER:((  If we aren’t supposed to eat animals, why are they made of meat?  And just so you don’t forget……today is the tomorrow you worried about yesterday.  Keep in mind, if your worries get the best of you, just remember suicide is the most sincere form of self-criticism. Oh, & I once prayed to God for a car, but quickly found out he didn’t work that way…so I stole a car and prayed for his forgiveness………that worked.