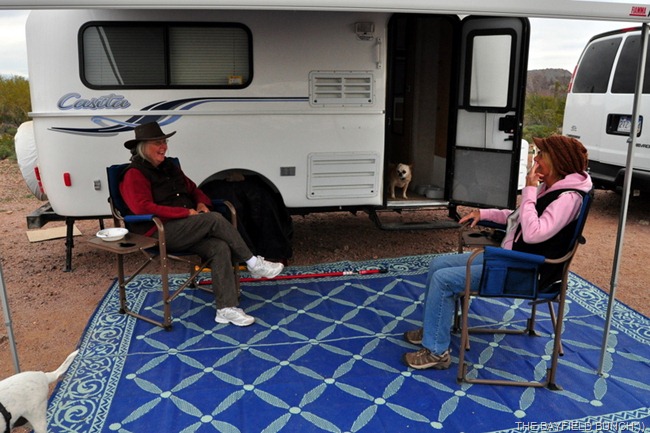 Overcast morning so we started the day out a tad on the chilly side.  Didn’t bother RV SUE though as she sat under her awning enjoying a morning coffee.  Stopped for a wee chat on our way by.  Just long enough for poor Sue’s coffee to get cold:((  Don’t ya just hate when that happens!! 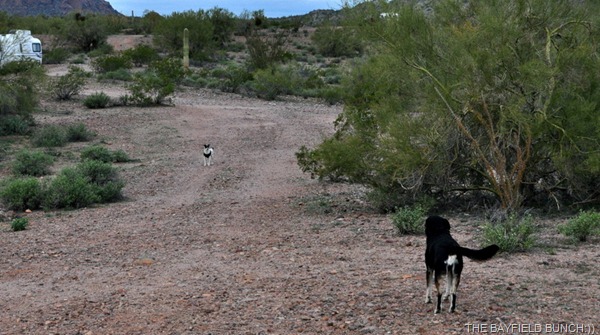 SPIKE & PHEEBS EYEING EACH OTHER UP FIRST THING THIS MORNING

Sue mentioned friends of hers & fellow RV Bloggers Chuck & Geri from the HAPPY CAMPERS were just about a mile down the road in their 5th wheel.  Soon as Kelly & I were back from our walk we hopped into our Jeep and motored over to say ‘Hello.’  We are quite the social animals you know:))  Chuck & Geri were already outside with their 3 dogs, Scotty-Boy, DoogieBowser & Radar.  Always nice to meet new RV Bloggers.  Especially liked their desert tanned Ever-Lite 5th wheel made by EVERGREEN.  I like those subtle earth tone solid colors.  Soooo much nicer than white, white, white!! 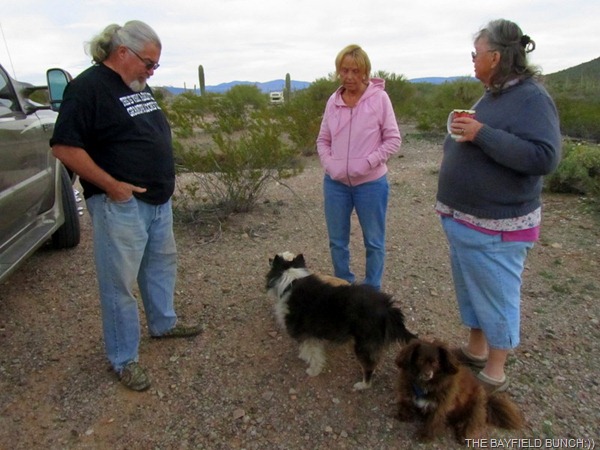 CHUCK, KELLY, & GERI WITH THE POOCHES 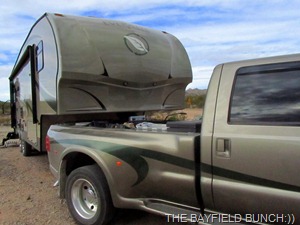 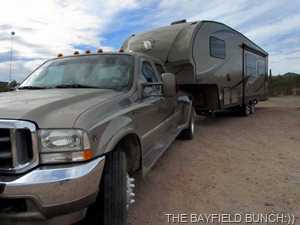 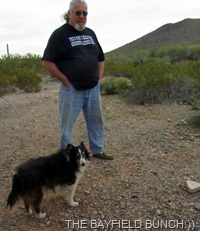 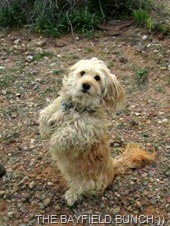 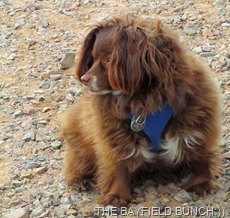 Chuck & Geri are experiencing a few electrical problems at the moment which may make them head home to Truth or Consequences New Mexico sooner than later.  A little accident with the power cord between the truck & 5th wheel I understand.  Chuck was interested in seeing our new satellite tri-pod we recently purchased from TV4RV.COM so we may see them again tomorrow.  Nice folks for sure:)) 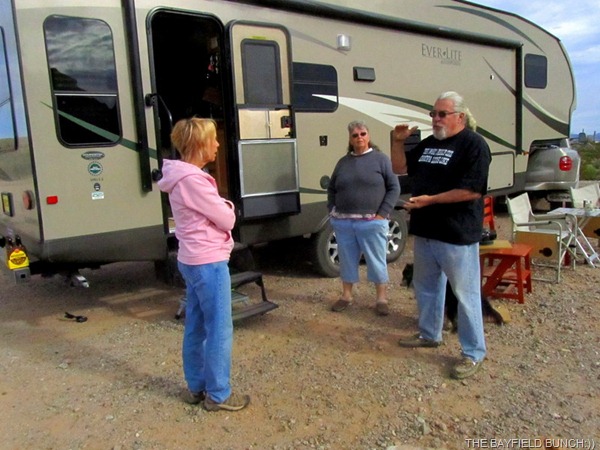 CHUCK TELLING KELLY HOW HE ONCE CAUGHT A FISH THIS BIG:)) 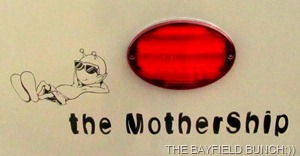 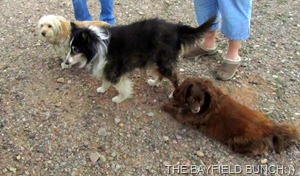 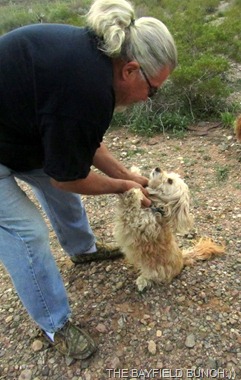 BOONIE dropped by on his bicycle this afternoon with Coffee Girl in tow.  Wasn’t long before Pheebs & Coffee Girl had the landscape torn up for miles around with great swirling dust clouds rising high into the atmosphere. 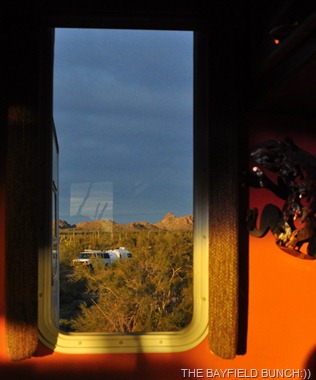 Can’t remember the last time I had my telescope set up. Back home in Bayfield we have so many Pine trees around our house we can only see small patches of night sky. Here in Arizona during the winter I often find night’s too cold to be outside as a rule but recently the night’s here in Ajo have been warming up nicely. Friday night I set up my telescope with the Orion Nebulae being my prime target. 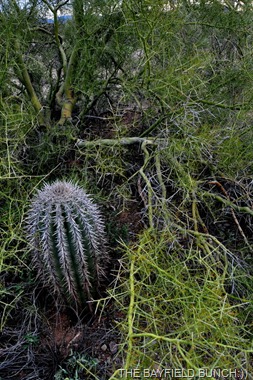 Every time I put my eye to one of the eyepiece’s of my Stellarvue 80mm Refractor Nighthawk telescope I am immediately transported into space & made aware of the vast Universe we live in. There are so many billions of stars up there the background of space actually has a light gray tinge to it from all the glowing light produced by countless billions of stars. By the way, this is the same scope I have adapted for use with my camera. 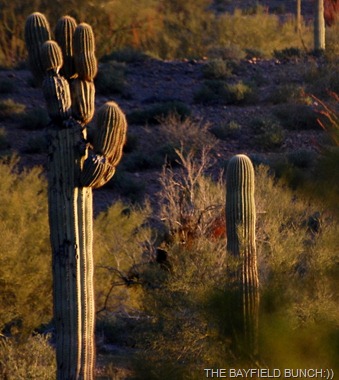 The Orion Nebulae is easy to find so that is where I headed right off & sure enough there it was. Right where I left it when I last looked at Orion through my telescope. Can’t explain how I feel out under the night sky but it is not a religious feeling. I believe it is something far beyond man’s understanding of any & all religious beliefs. 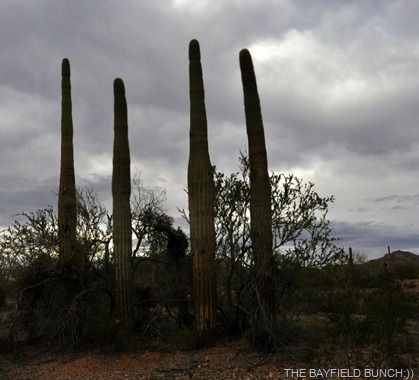 THE 4 DARK SAGUAROS OF THE APOCALYPSE:))

Below are a few pics of my Stellarvue 80mm Nighthawk telescope set up for night viewing.  Also 3 different strength optical eye pieces I use with it.  Also a pic with the lens when I use it with my camera. 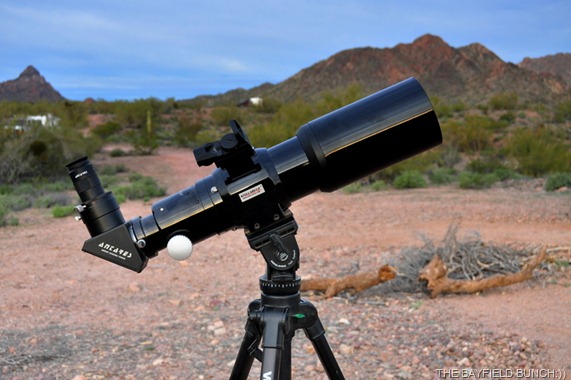 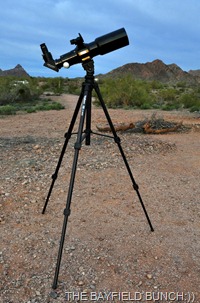 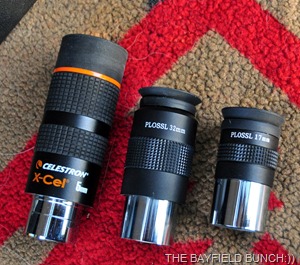 Two schools of thought on boondocking locations.  Some boondockers, when finding a great location prefer to keep that location secret not wanting others to know about it.  I do understand the logic of that thinking.  Others, like myself prefer to share not only where we are, but my thoughts & feelings of what we are seeing & experiencing.  But, sometimes I do question my reasoning. 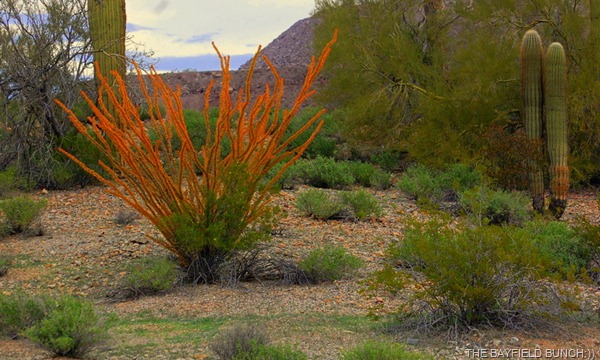 ALWAYS ENJOY FINDING SPLASHES OF COLOR IN THE SONORAN DESERT

Winds suddenly picked up this afternoon forcing us to put our awning in. It was RV Sue’s first day for having her awning out so I was able to quickly help with getting her awning stowed away as well. 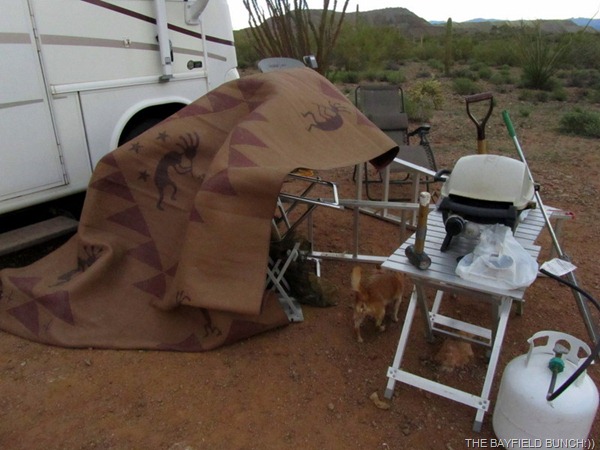 YEP, FORGOT TO SPIKE DOWN OUR GROUND MAT ALRIGHT

The Last Paragraph:  I remember several periods of time this past summer where I reached a few crossroads in my blogging interests. Tired and bored with my blog's 'lighter fare' I reached out to readers for some ideas of change. Received some helpful constructive criticism which I appreciated & some snide remarks which I did not. Considered starting a second blog to vent my realistic thinking on what I perceive this society's ill's to be. But, after letting off a little steam in my ‘OSTRICH’ blog I decided I did not have the type of personality required to play the games in that arena. I believe in what I think is right but what's the point of embroiling myself in the very types of stress I generally try so hard to avoid. For the most part, I will leave that stuff to the people who are far more capable & far less sensitive than I. 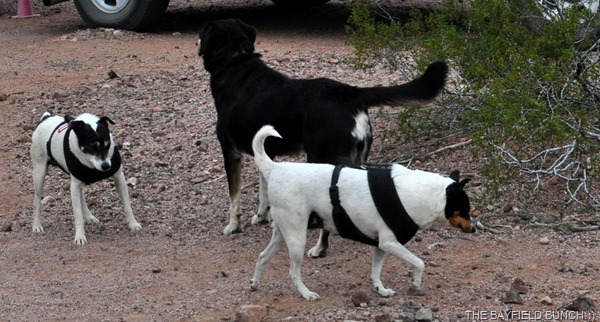 PHEEBS WITH SPIKE & BRIDGET OF THE CANINE CREW