The Whitewater Draw is a mile south of us and I could hear a great cacophony of sound arising from the thousands upon thousands of Sand Hill Cranes this morning.  No birds in the air so I was wondering if they were having a huge great argument about who was going to be the flight leaders for the day.  A short time later great waves of Cranes began lifting off and making their way up the Valley.

We were under cloudy skies and cool temperatures all day.  Aside from Pheebs and I getting a little more done around the corrals late this morning it was kind of a non energy day.  Just wasn’t feeling quite up to par and seemed to doze off just about every time I sat down.   With warmer weather and sunshine headed our way I am hopeful we’ll be out on some trails very soon. 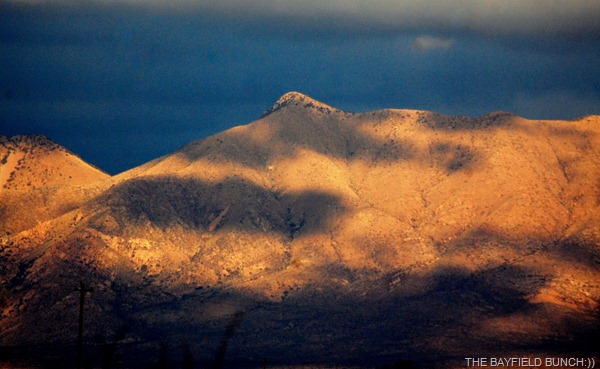 Both Kelly and I are sun people and seem to function at a higher mental and physical level on sunny days.  Really don’t think we would do well in some of the western States or coastal British Columbia with their higher rate of clouds and rain.  I do believe in Seasonal Defective Order and so does Jool.  Might want to catch her post entitled, S.A.D.  While there you might also like Jool’s post about SMALL SPACES.  Being a small spaces kind of guy myself I could sure identify with her thoughts.  Having grown up in a large two story brick house I would certainly not want to live in all that kind of big open space again.

Our yucky weather day got even yuckier about 3 p.m. when a short cold rain rolled through the area.  Pearce and Gleeson came in reminding me of a couple times they pulled a few overnighters a couple years ago.  We had a total of 5 furry dogs in the rig some cold nights.  Max and Checkers were with us then.  I love having all the dogs inside.  Some people like having a bunch of kids around.  I like having a bunch of dogs around:)) 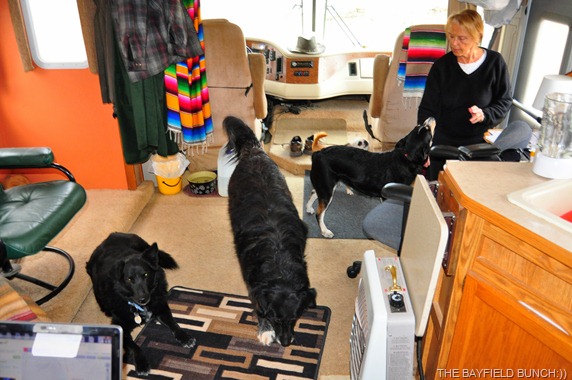 GLEESON AND PEARCE LIKE HANGING OUT WITH THE BAYFIELD BUMS…..CAN YOU FIND THE LITTLE  MOTORMOUSE

Kelly made sure to gather up all my medical records from the Tucson hospital Wednesday just in case we travel further west next month. (which I think we will) Also wanted as much info as possible for our medical people back in Ontario when we get home in late March or early April.

We are leaning towards continuing our travels as planned next month and dealing with whatever happens, if and when it happens.  And, we just may be back at the Ranch again around the end of February. 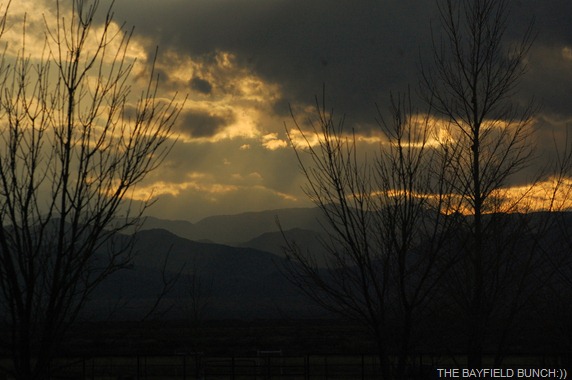 GROANER’S CORNER:((  Recently a guy in Paris nearly got away with stealing several paintings from the Louvre. However, after planning the crime, getting in and out past security, he was captured only 2 blocks away when his van ran out of gas.
When asked how he could mastermind such a daring and otherwise brilliant crime and then make such an obvious error...
... He replied: "I 'ad no Monet to buy Degas to make de Van Gogh."