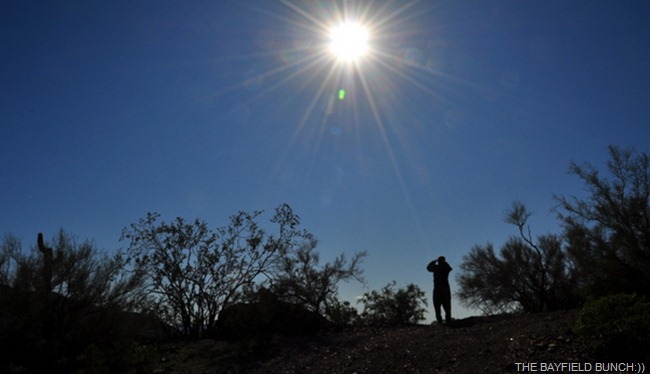 KELLY CLIMBS A RIDGE AND PEERS INTO THE NEXT VALLEY ALL THE WAY TO MEXICO
Don’t think I will ever get used to the cold desert nights and frosty early mornings.  Had ourselves a nice sunny day but the moderate winds turned the already cool air, cold!! 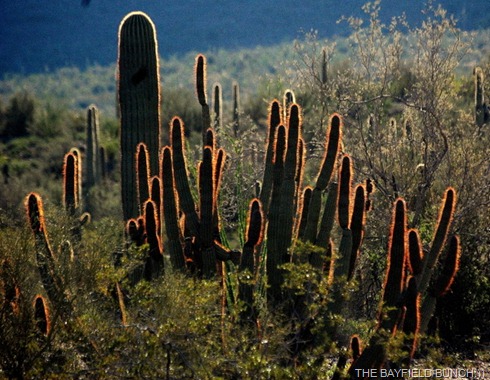 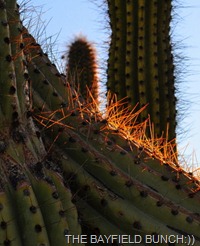 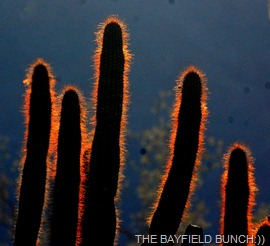 AN EARLY MORNING COLORFUL ORGAN PIPE CACTUS
Neighbor Rick’s dog lady spotted us returning from our morning walk and came running down the hill to see her best Pal, Pheebs.  So nice to see dog’s playing together and having so much fun. 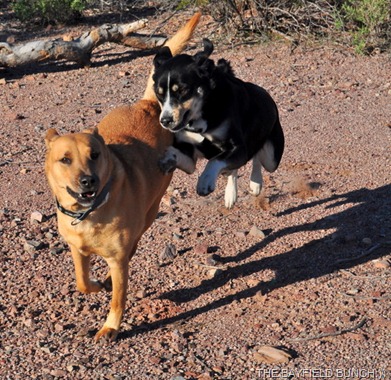 <<< PHEEBS IS COMPLETELY AIRBORNE IN THIS PHOTO
Rick also said those booms we heard a few days ago (another one today) were sonic booms from the overhead fighter jets breaking the sound barrier.

LADIES HOUSE AT LEFT AND PHEEBS HOUSE AT RIGHT:))
A mile or more to the south of us is a large rock formation called the Locomotive.  We knew of a desert road running south off the southeastern end of Darby Wells road that could probably take us there.  The El Camino del Diablo road is a dusty bone jarring road running a hundred miles to the town of Wellton just 20 miles east of Yuma. This road cuts through some of the ruggedest desert around these parts.  It follows along close to the Mexican border.  Countless people have lost their lives in this vast expanse of desert, rocks and bones.  Check out RV’er Diana’s blog entitled, THE MIDDLE OF NOWHERE as she and some friend convoyed this stretch of desolate and barren road back in January of 2011. 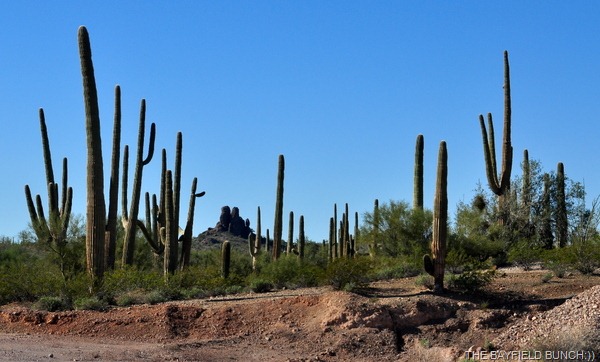 LOCOMOTIVE ROCK IN THE DISTANCE…..OUR DESTINATION
Remembered seeing some old corrals along the El Camino road not far from Darby Wells a few years back so that was our first stop.  Whenever I see an old windmill I always like to get a few shots for MIKE up there at North Ranch, Arizona.  He’s a windmill kinda guy:)) 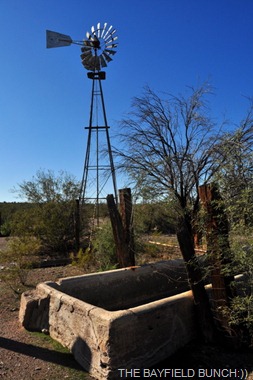 I am also intrigued by weathered sun drenched wooden corrals and barns.  No barns left but there were some dusty old cattle pens and corrals still standing.  I plan to go back by myself shortly and work on some better photos. 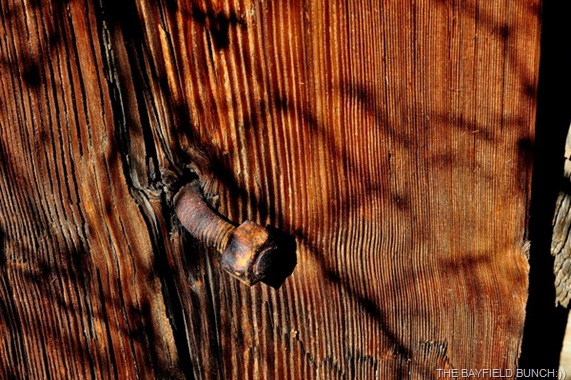 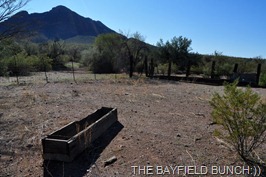 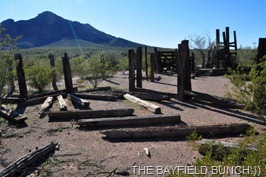 Eased our way around a mess of scratchy Mesquite bushes and got ourselves back onto the El Camino road heading south. 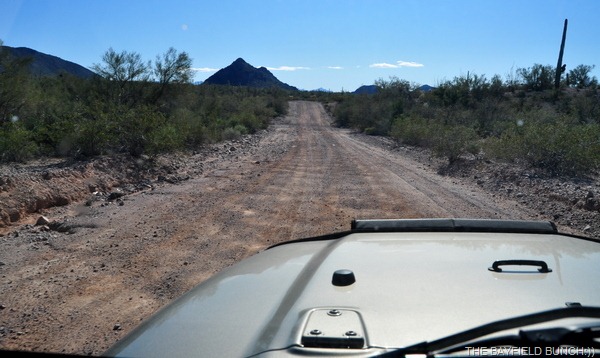 Not too far along we saw a Jeep road cutting off into the desert on our right side heading in the direction of the Locomotive rock formation.  Road wasn’t too bad and we soon came across more great boondocking sites with one site actually having a boondocker tucked into a hillside in his older Class A.  Three big solar panels, bird feeders and a nice lanai type awning.  The fellow was sitting outside reading a book as we waved and jostled by.  He had the whole world to himself and we envied him in his cozy Shangri-la setting.  We will definitely check out this area again if we return through this area later in January. 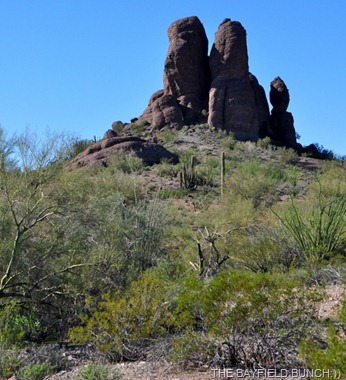 LOCOMOTIVE ROCK >>>
Just beyond the Class A we could see the road became rougher and a four wheel drive vehicle was definitely needed.  Fortunately, we had one:))  Slowly made our way to the base of Locomotive Rock.  Couple of great camping spots there and I’ll bet IVAN and his truck camper could get in here no problem.  No chance for a Motor Home or trailer of any kind though. 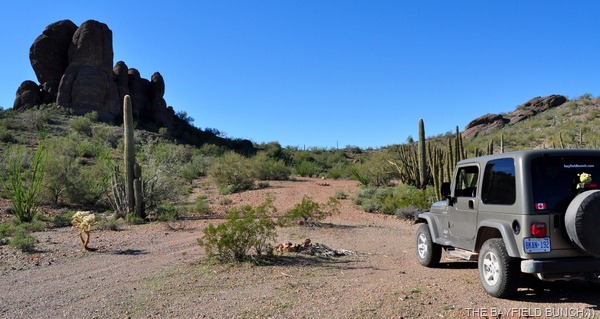 GREAT CAMPING SPOT NEAR THE BASE OF LOCOMOTIVE ROCK
Again, I just marveled at how beautiful this area is as we parked the Jeep and clambered up a rocky road right to the very base of Locomotive Rock.  Had us a pretty cold wind a blowin so Kelly headed back down to the warmth of the Jeep while I scouted around the base of the huge rock formation looking for an easy way up.  I like climbing up rocks and always have but no, I am not a serious rock climber like those guys with all the ropes and grapples stuff.  Just simple boots on the ground and up you go ass over teakettle….or is that the way a feller comes down.  Hmmmm, can’t remember now:)) 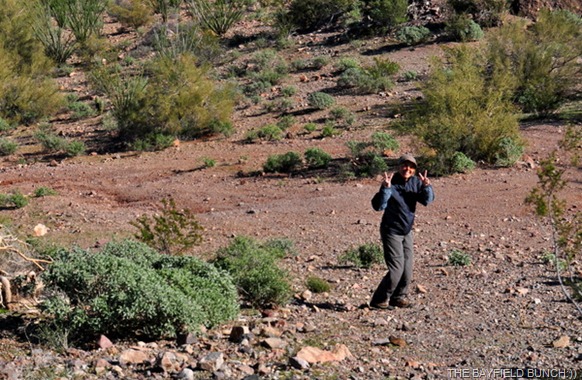 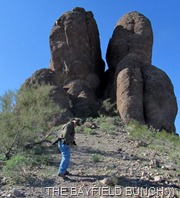 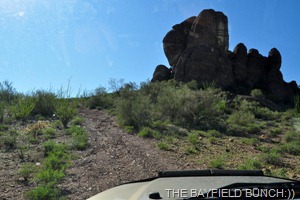 I could see ways to the top that I could have done, but not today.  If we were camped in that area I can see taking the time to do the climb. 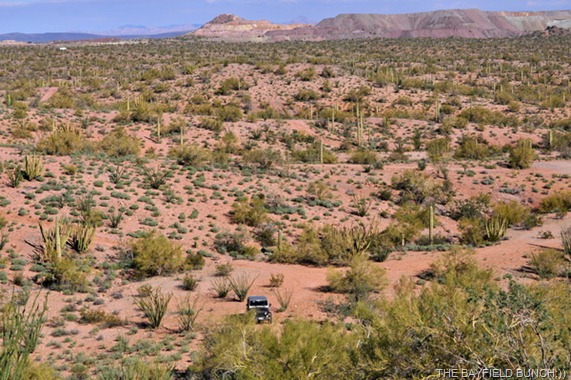 WHITE DOT AT TOP LEFT OF PHOTO IS OUR RIG AND AT BOTTOM CENTER IS OUR JEEP, WITH KELLY SITTING IN IT:))
Took a bunch of pics and headed back down to the Jeep.  I will post more photos from around this rock formation over the next few days. 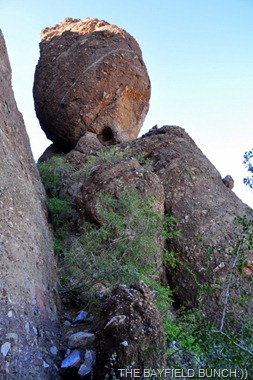 Headed back out the rough road past the peaceful Class A digs taking note the fellow was still peacefully reading his book.  We also took note of a couple level spots for future travels to this area.  We were home by noon:(( 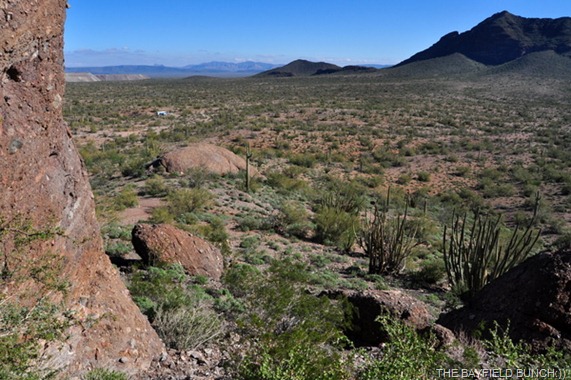 WE DROVE IN PAST THAT CLASS A MOTOR HOME OUT THERE ON THE LEFT…WE HOPE TO RETURN TO THIS AREA WITH OUR RIG AT SOME POINT IN THE FUTURE
Cold winds kept us inside for the rest of the day as we both caught up on computer stuff.  What would we all ever do without our computers eh.  Can’t even imagine that one.  Sure has put a lot of extra interest and fun into everyone’s RV lifestyle. 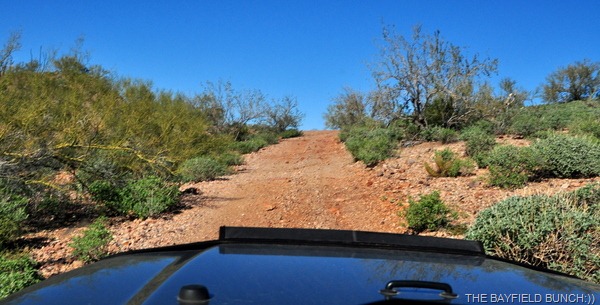 GOTTA LOVE ALL THESE GREAT JEEP ROADS IN THIS AREA
Now, in response to Kenny’s comment on my Saturday post…..No Kenny, (or is it really Mr. Anonymous again using a fake name this time) we have never stayed in one spot 4 or 5 months.  You have obviously never read or followed my blog and no, our RVing style is not anything like somebody staying in an RV Park in Yuma or Mesa.  You either have us totally mixed up with another couple or once again this is a clear cut case of sour grapes by my old arch nemesis, Mr. Anonymous.
And, while I am on the topic I am curious about something.  Why would someone continue to read a blog they obviously don’t like unless it is to find fault with the writer or the writer’s content.  If I don’t like something someone has written I move on and do not feel compelled to leave rude, sarcastic, or inaccurate comments on their blog.   Now, why don’t you get on with your life and enjoy doing the things you like to do, read the blogs you like to read, and get that chip off your shoulder.
And a footnote to this…..Thanks Ed:)) 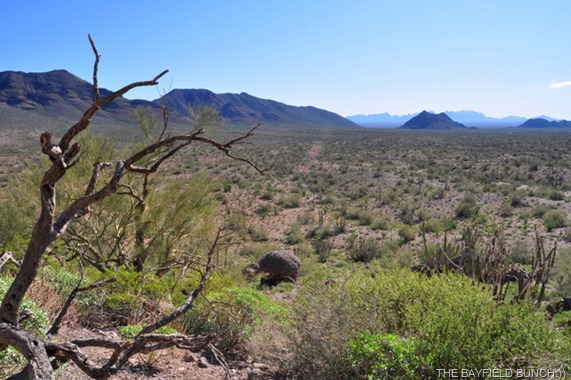 Bob over at the CARETAKER CHRONICLES noticed that we have boards under our rig’s wheels instead of having the jacks down.  Had we been faced in the opposite direction I would have used the driver’s side jacks to level the coach because they both work fine.  But, the rear passenger side jack is our problem jack and I do not like to use it.  It won’t retract and I have to crawl underneath, dig a big hole in the ground under it, place a scissors jack in the hole, and jack the rig’s jack back up into place.  Digging a hole in this rocky ground is not an option. 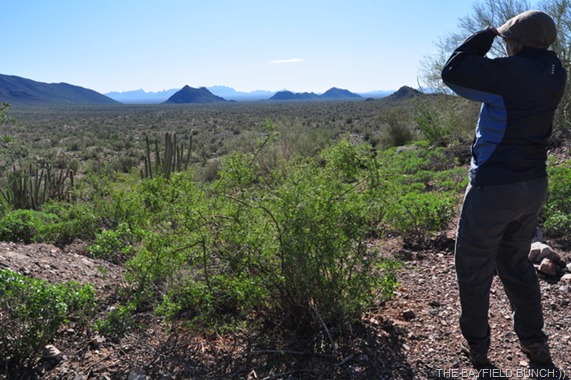 KELLY LOOKS ACROSS A VAST STRETCH OF SONORAN DESERT TO THE FAINTLY DISTANT AJO MOUNTAINS
To answer Gerrit’s question in our Shout Box….Verizon allows us to put our Internet service on ‘temporary suspension’ while we are home for the summer.  Just call Verizon or log into your Verizon account and do it on-line.  Important to remember this is for Verizon Internet and not Verizon cell phone service. 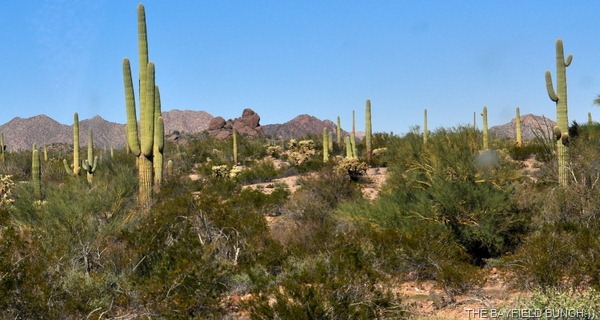 DISTANT LOCOMOTIVE ROCK AS SEEN FROM A DIFFERENT ANGLE TO THE SOUTH
And, before I forget, just want to say a word of thanks to the folks in Facebook for your ‘Comments’ and ‘Likes.’  Thanks guys:)) 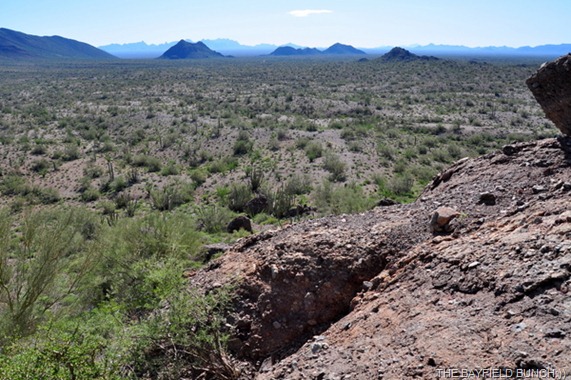 LOOKING SOUTH TOWARDS MEXICO ABOUT 40 MILES AWAY
Close call for TIOGA GEORGE as he confronts an intruder in his rig at 1 a.m. in the morning.  Can happen to anyone, anywhere, at anytime and I don’t think there is one of us out here who hasn’t forgot to lock a door at one time or another. 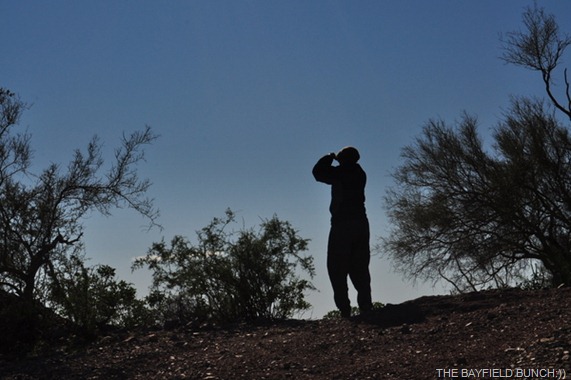