KIDNEY STONE: SOMETHING STRANGE HAS HAPPENED……….. 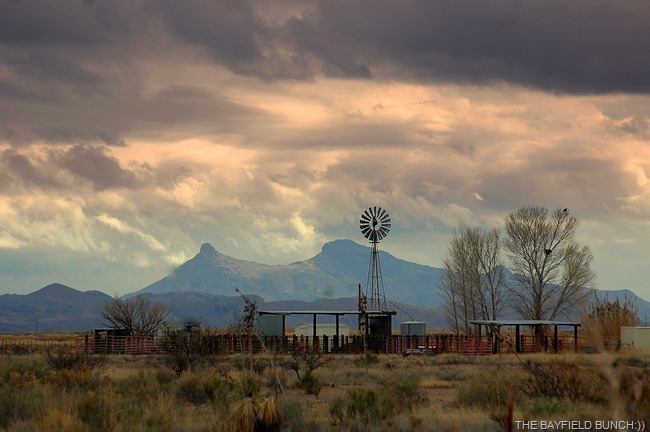 We had the greatest looking skies today as a storm front made it’s way through the area.  Took the above photo on our way to Douglas this morning.  It is this area of Arizona for which Douglas native, Stan Jones wrote the song, ‘GHOST RIDERS IN THE SKY.’  All the way to Douglas, and especially with the moody skies from mountain top to mountain top, I had Ghost Riders playing over and over in my head. 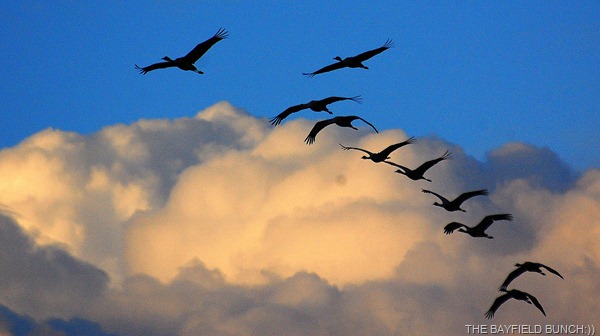 I first became aware of something different about 8 p.m. Saturday night.  I had taken my last 800mg Ibuprofen about 1 o’clock in the afternoon.  With the way things were going I should begin to feel the pain returning around 7 or 8 o’clock.  Nothing.  9 p.m. rolled around and still no pain.  Decided to take my chances and go to bed without taking another Ibuprofen.  Figured the pain would wake me up and I would take one then.  Woke up at 1 a.m.  Still no pain.  This was going against everything routinely associated with Kidney Stones.  Could something else be at work here?  Dare I think Doc Kelly’s remedies are working?  Dare I even think……… 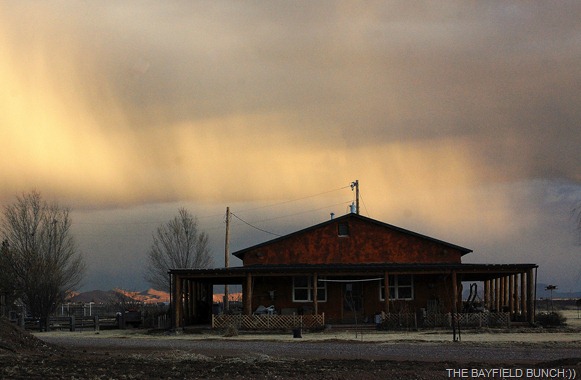 Must admit, both Kelly and I were a bit skeptical about everything we had read and the solutions people had used to deal with their stone and their pain.  She had based her treatment on the advice of many people who have already gone through this.  Could all this lemon and olive juice, cranberry juice, stone buster liquid and pills have really done something?  I’m still a bit skeptical but for sure something has happened to that stone.  Don’t know if it has moved, disintegrated or what.  All’s I know is that right now at 8:30 Sunday night I am still pain free without medication and it has been well over 24 hours now. 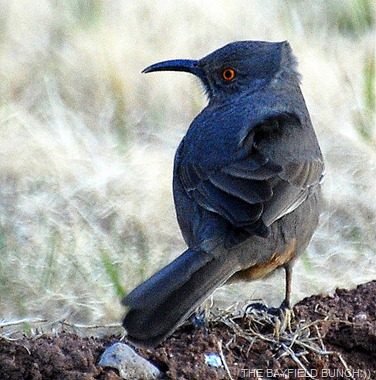 CURVED BILL THRASHER WITH HIS BACK TO THE WIND >>>

I do not believe I could have passed the stone or even parts of it without knowing but if I didn’t pass it……where is it!!  If I remain pain free for the next 24 or 48 hours we will have to phone the Urologist’s office in Tucson for an opinion.  I have a feeling we will still keep the Tucson appointment because we want to obtain a copy of the Cat Scan X-Ray taken at the Tucson hospital earlier this week.  If this stone holds off until we can get back to Ontario in the Spring maybe another Cat Scan will reveal what has happened to this large stone.

Should also mention that our Manulife insurance company in Canada called Saturday to verify the kidney stone information.  Kelly said it was a good call but had to fax them some additional information like the Doctor’s report, etc.  At least no talk of trying to drag me back to Canada.  If I still do have this procedure I would much prefer to recuperate here in the healthy sunny climate of Arizona than the damp dark cold and snow back home in southern Ontario. 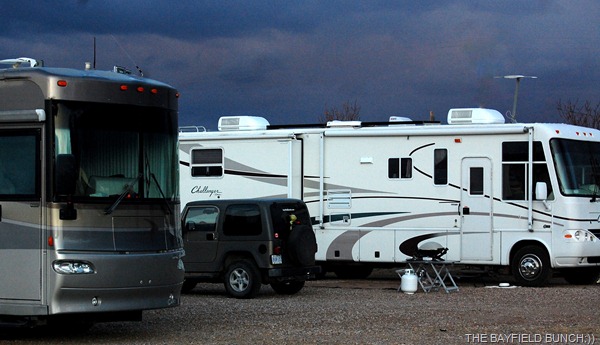 I think the last time Kelly and I were ever at a DENNYS was in Page Arizona back in late 2007.  Stopped in as we were making our way from the Grand Canyon’s north rim to the Grand Canyon’s south rim.  This morning on a spur of the moment decision we popped into Denny’s in Douglas Arizona.  Our timing could not have been worse.  It was Sunday morning and is habit, the local Church’s dump their faithful flock right into Denny’s for breakfast.  A 45 minute wait had Kelly and I beat that waiting line by offering to sit at the counter.  Don’t know what I was thinking by ordering myself a Lumberjack Slam but I did manage to get through most of it.  Kelly had a steaming hot Ultimate Skillet which looked really good even if it did have a lot of green and red stuff in it.  Between the 2 of us we managed to save enough of our breakfast for tonight’s supper. 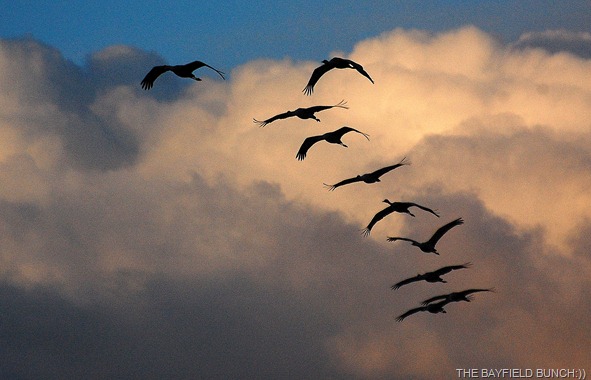 Aside from the Walmart in Goderich back home I would say the Walmart in Douglas Arizona is where I have made most of my Walmart trips over the years.  Both stores look the same….but the people don’t.  With the town sitting right on the Mexican border it is mainly Mexican and Spanish looking and speaking people here.  I actually don’t mind that and accept that as a welcome change from the same old, same old back home all the time. 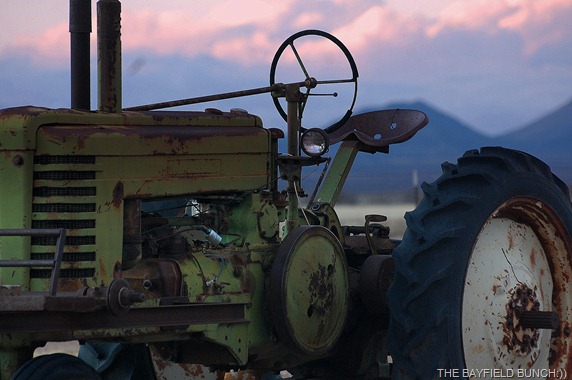 Temperatures dropped in the early afternoon with some rain showers passing through.  Jeanie and Ray were busy loading their Motor Home as they plan on leaving in the morning.  Not normal for me to lay down for a snooze in the afternoon but that is exactly what I did about 2 p.m..  I was having a big snuggle with Pheebs and Motor on my bed and the next thing I knew it was 4:45 and I awoke to nobody around.  Kelly, Pheebs, and Motor were already out and had all the chores done around the property.  Gate closed, property water valves turned off, night light on for the chickens, chickens fed and eggs gathered.  Ranch dogs Pearce and Gleeson fed as well as Charlie the Cat.  Perimeter walk around the fence line to make sure the Donkeys had hay and water and that was about it.  All that was left for me to do was take some more photos of the moody sky.  Pretty easy day I’d say:)) 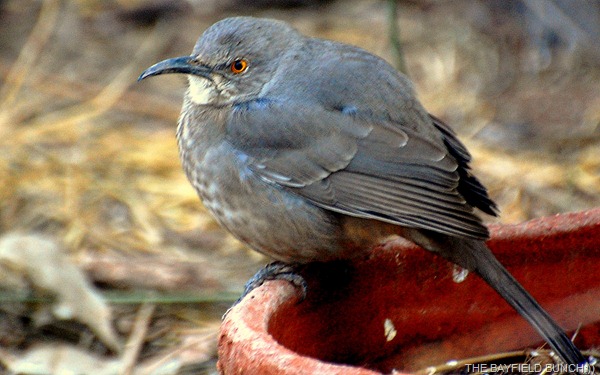 Part time Snow Birders TnT has joined the Bunch on our southwestern travels as well as CASITA MCSITA.  We welcome you folks and thanks for reading our blog.  MARIBETH has rounded out our numbers by coming in as Blog Follower 400:)) Thanks everybody for the continued support and encouragement. 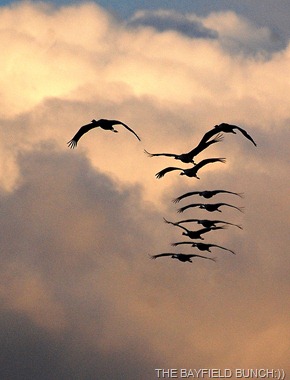 GROANER’S CORNER:((  Matt went into Doc Steven's office for his annual checkup, and the Doc asked if there was anything unusual he should know about.
He told the Doc that he found it real strange how his suit must've shrunk just sittin' in his closet, because it didn't fit when he went to get ready for a wedding recently.
The Doc said, "Suits don't shrink just sittin' there. You probably just put on a few pounds, Matt."
"That's just it, Doc, I know I haven't gained a single pound since the last time I wore it."
"Well, then," said Doc, "You must have a case of Furniture Disease."
"What in the world is Furniture Disease?" Matt asked.
"Furniture Disease, Matt, is when you reach that stage in life when your chest starts slidin' down into your drawers."