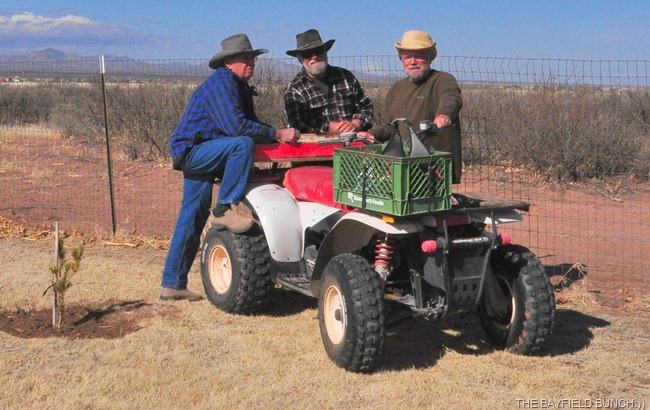 THE SATURDAY BOYS….RAY, AL AND TERRY

The Ranch we are at is 80 acres with nearly 4 acres totally fenced in with Coyote proof fencing. Pretty nice for us to just open our door and let the furry guys out to run and explore wherever they want.  Even little Motor is out and all over the place.  So great to see the dogs just being able to be dogs.  Again, we are so fortunate to be where we are. 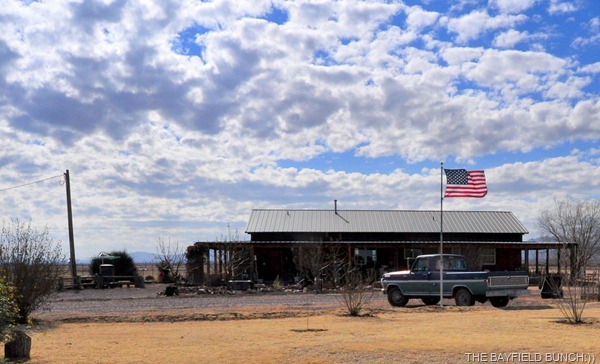 Doc Kelly is really socking the liquids to me.  Oceans and oceans of Cranberry juice for starters.  Fresh lemons mixed with Olive Oil.  Hydrangea Root pills plus something called Super Colon Cleanse.  WOW, is that stuff ever a rush and at 2 a.m. this morning I was finally clear of a rapidly worsening 3 day problem.  She mixes up a few drops of a Stone Breaker compound and down the hatch that goes.  That one tastes pretty yucky.  Celery juice or something.  Intersperse all that with some Milk of Magnesia and I am a walking time bomb. 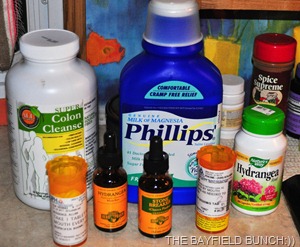 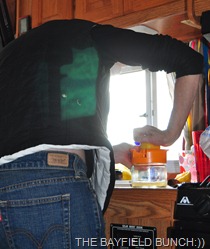 MY KIDNEY STONE BUSTING ARMY AND KELLY SQUEEZING A LEMON

I have stopped using the Oxycodone pain pills because I think it is those pills that are giving me the overall sick feeling which in turn is killing my appetite.  The 800mg Ibuprofens are not lasting the hoped for 8 hours so I’m taking them every 6 to 7 hours.  If I run out of those guys I will be in some trouble for sure.  Hope to re-new that prescription in Tucson Wednesday if Doc Kelly can’t blast that stone out of me. 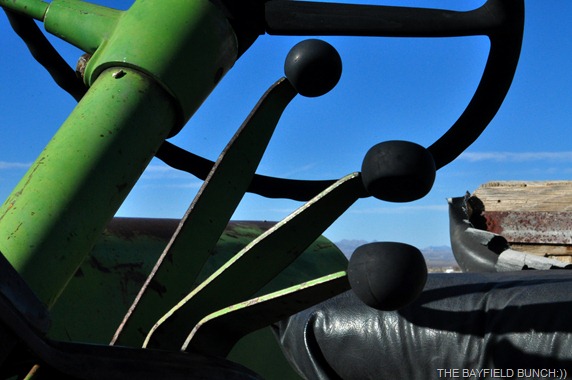 Terry and Martha from GYPSY LIFE JOURNAL dropped into the Ranch this morning around 10:30.  Although we had never met them we have been following their blog for awhile now and we knew they were in the area.  Jeanie & Ray had wondered if we knew any folks who might be interested in staying at the Ranch for a bit after we leave in mid January.  Terry and Martha came to mind because of their outdoor interests, love of animals, and familiarity with farms and ranches. 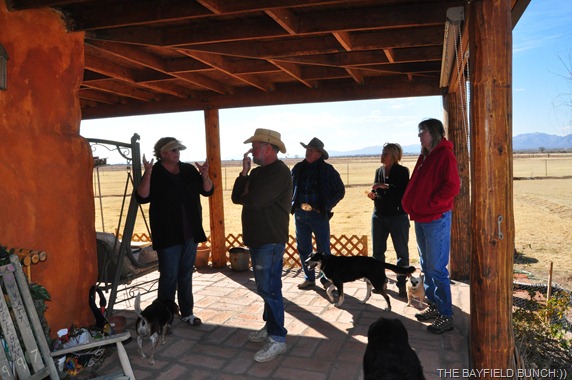 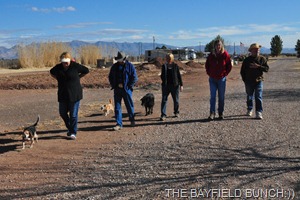 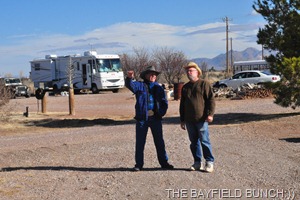 Always nice to meet fellow travelers and especially fellow bloggers.  They have a Beagle named Charlie so Jeanie introduced all the dogs and away we all went for walk around the 3.6 acres of fenced in property getting to know each other.  I took a pass on the house tour because I was feeling a little sick so hung out in the rig till all the folks came outside again.  Ray showed Terry and I a few procedures he generally does with the ATV while the ladies walked all the way around the property again. 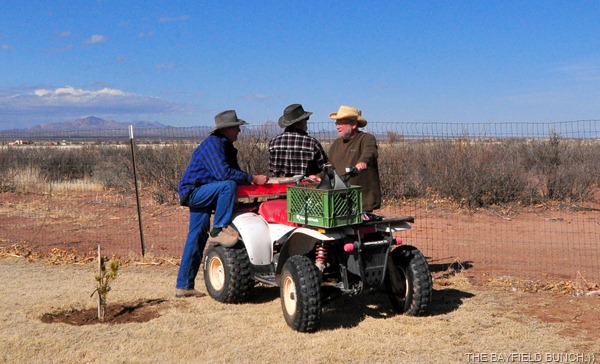 SAY, YOU DON’T SUPPOSE AL IS…..NAWWWW, HE WOULDN’T DO THAT

As with almost all people we have met in our travels Terry and Martha are your very typical easy to get to know RV folks.  We are so fortunate to have such a helping and tight knit little Blogging community out here where trust has already been established well before meeting anyone.  Like Martha said to me when I met her, “I feel I already know you.’  And yes, in the Blog World that is often the case as we all follow each other’s blogs almost daily. 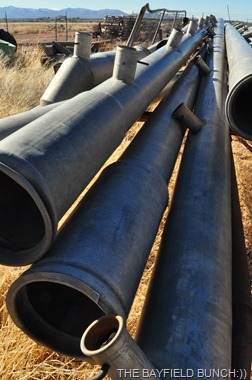 Nancy over at the OREGON WANDERERS has just become our 394TH Blog Follower.  Welcome aboard.  Nancy is new to the blogging world and has just dipped her toe into the vast ocean of Blog Land.  Might want to drop by with a, “come on in, the water’s fine”:))  GRETCHENDM & KAREN FISCHER also climbed aboard bringing us ever closer to the 400 Blog Followers mark.  Thanks folks and the Bayfield Bunch welcomes you all aboard. 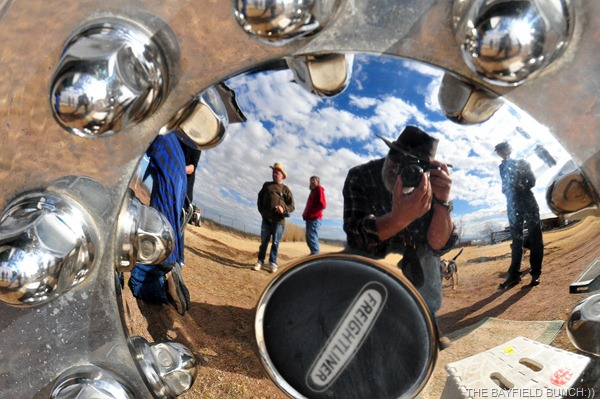 While in the Tucson LAZY DAYS service yard a few days ago a fellow RV Blogger drove by and took a picture of our rig.  I was probably home but Kelly must have been out with the Jeep somewhere.  I like the old tumble down house LARRY has for his header picture.  Looks like something Kelly and I would like:)) 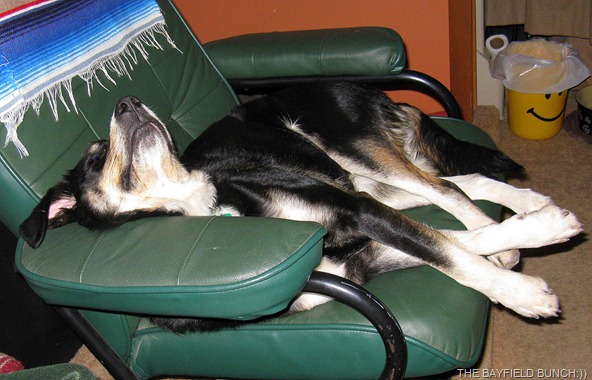 PHEEBS WAS TOTALLY KNOCKED OUT AFTER HER BIG DAY OF VISITING

A little confusion about SALVATION MOUNTAIN'S LEONARD KNIGHT.  It was his care giver Kevin Eubanks who suddenly died recently.  Far as we know, Leonard is still alive, but in a care facility.  Hope I got that right. 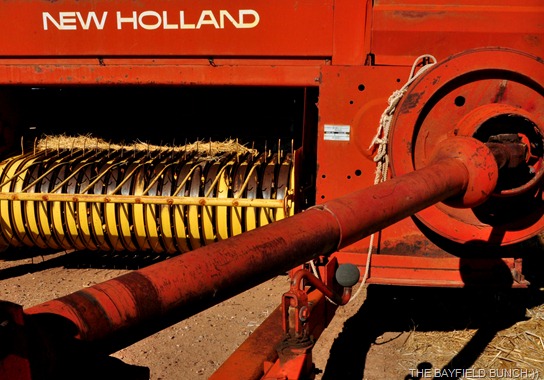 It’s not everyone who gets right into that old Christmas spirit including Kelly and I but for you folks who do I suggest you slip over to KAREN AND STEVE'S where they cut down their own real Christmas tree each year, decorate it, light a warm cozy fire in the fireplace and listen to Christmas carols.  Oh how that brings back many old pleasant memories for me when I was a wee kid growing up in the small village of Tavistock Ontario, Canada. 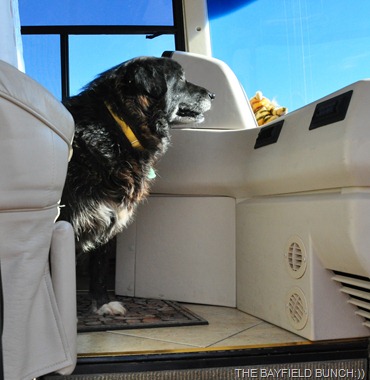 My appetite slowly returned late this afternoon after the sick feeling went away and I was able to eat half a baked potato and a small BBQ’d steak.  Washed that down with a cold glass of milk and a peanut butter & honey sandwich.  Now, if we can just get this darned stone out of me. 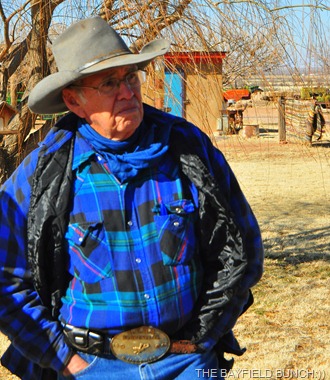 GROANER’S CORNER  George had invited the pastor and his wife for dinner, and it was little Joey's job to set the table. But when it came time to eat, Joey's mother said with surprise, "Why didn't you give Mrs. Brown a knife and fork dear?".
"I didn't think I needed to," Joey explained, "I heard Daddy say she always eats like a horse."