AWWWWWW NUTS!! WE BUSTED OUR TOILET THIS MORNING!!!! 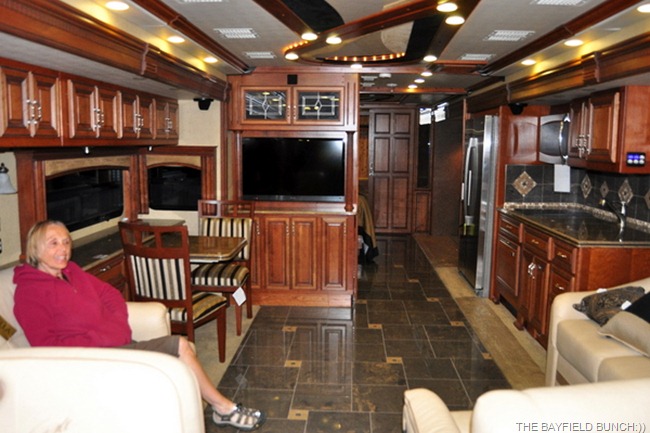 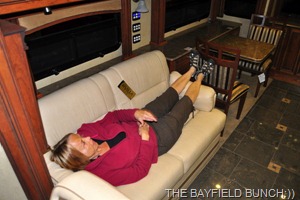 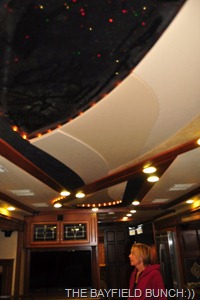 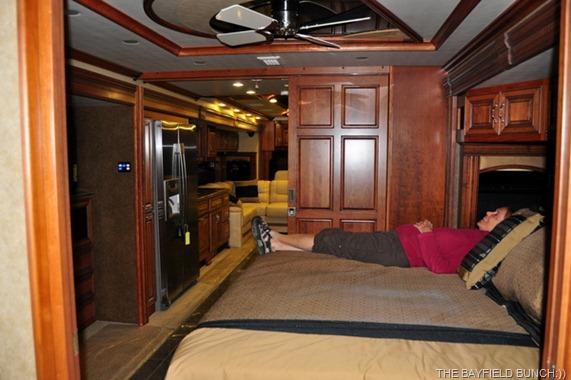 HERE’S KELLY IN OUR NEW DIGS:))

Little did I know at 4 a.m. this morning when I was outside with Pheebs enjoying the beauty of a silent desert bathed in moonlight that just a few hours later I would be packing up the rig and getting ready to move. 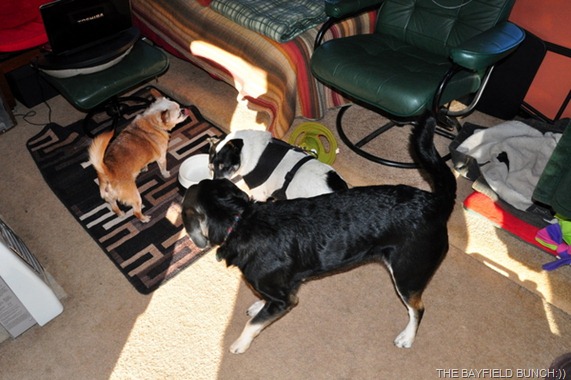 SUE’S LITTLE SPIKE DROPS IN FOR A VISIT THIS MORNING

Hadn’t planned on leaving for the Ranch until Tuesday but when both foot pedals broke on our toilet first thing this morning I knew we were in deep ga ga.  Normally the bigger foot pedal opens the slider valve in the toilet and it’s ‘bombs away’.  The smaller foot pedal flushes water into the bowl.  Both are operated by wires.  Both wires wore out and broke leaving the contents….in the toilet.  No way of dropping things into the tank below.  The plastic toilet is nearly 9 years old and once a toilet is that old and something breaks, it’s time to replace it.  Decision was made to head for Tucson and a large repair facility where we figured we could get a new toilet installed…..fast. 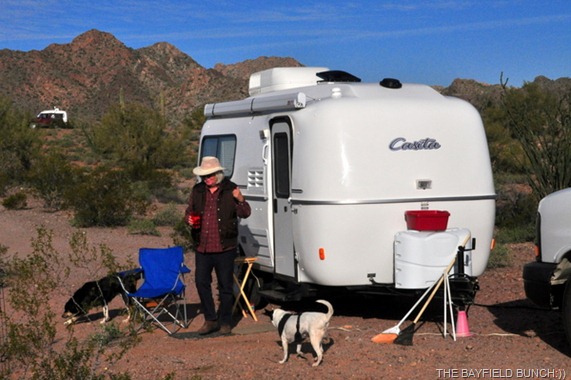 We walked down to see if RV SUE AND HER CANINE CREW had a better night and she did, sort of.  Sue’s batteries totally drained the first night in the desert and she didn’t get a lot of sleep.  Batteries charged up yesterday but drained again Saturday night.  Sue did get a good night’s sleep though.  This battery drain is a complexing problem for her and we have all been trying to help.  Rick has been a big help to Sue checking out things but the battery drainage problem is still elusive. 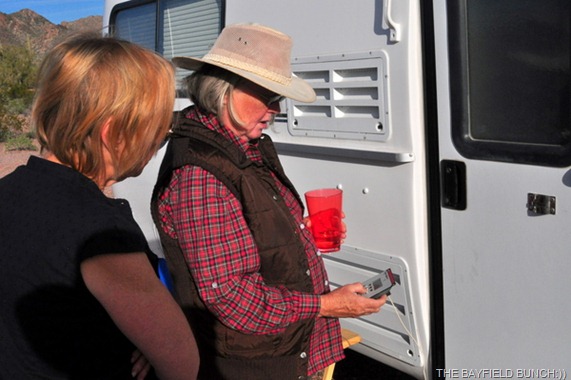 SUE CHECKS THE AMP HOURS ON HER HAND HELD METER

So, how is Sue taking all this??  Well, I have to tell you, she is a true trooper.  Despite the technical set backs on her first boondocking adventure she is totally loving the whole desert experience.  Spike and Bridget are just loving their whole new found freedom as well and it was fun to see all the doggy guys going back and forth between rigs visiting each other. 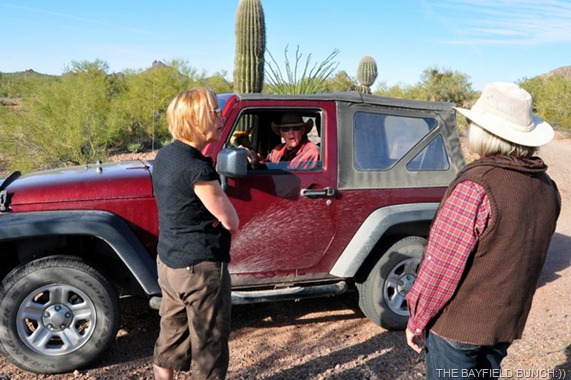 I’m sure as soon as Sue gets herself some power she will be up and blogging again.  We sure wished we could have stayed there with her until the problem was solved but unfortunately we had our own pressing crappy problem. 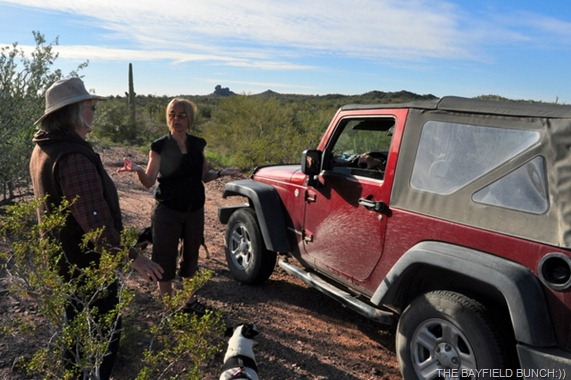 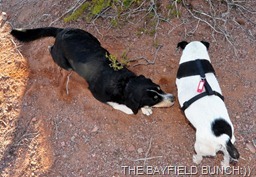 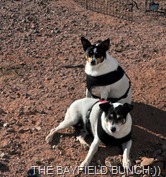 Gotta tell you something right up front here about Sue though.  We really took a liking to her and I could tell from the short time we spent with Sue that she is a genuine down to earth person.  My favorite kind.  I don’t take to folks like I used to years ago but what a great pleasure it is for me when I do run into someone I feel comfortable enough with to relax and be myself.  Sue’s one of those.  And Rick, just up the hill was another one.  I could see us becoming good friends. 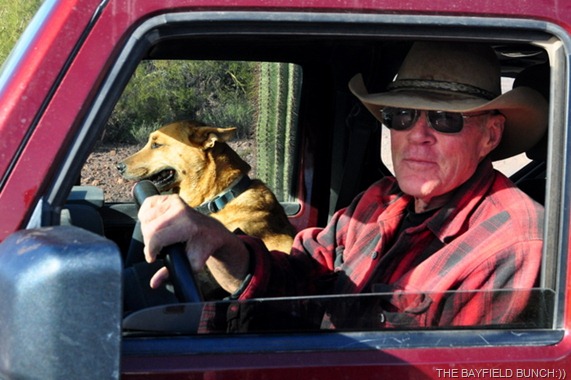 Finally had the rig all packed up and it was time for us to go.  Said our good-byes to Rick and his dog Lady along with RV Sue and her Canine Crew, Spike and Bridget.  Sure hope we meet up with these folks again some day.  As we left, both Sue and Rick had their heads under Sue’s engine hood trying hard to find out the source of her solar problems.  Good luck guys. 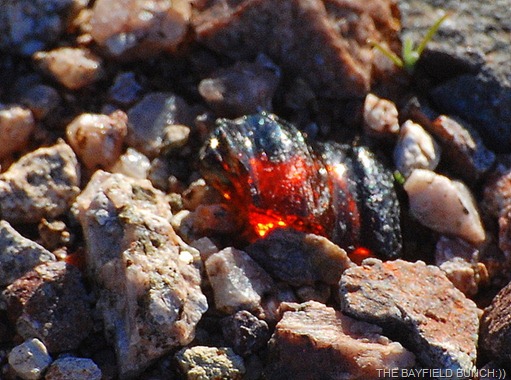 BURNING EMBER IN A FIRE PIT??  NOPE, PIECE OF AMBER GLASS FROM A BROKEN BEER BOTTLE

We headed down Darby Wells road to the highway, hung a right down to Why and a left for Tucson Arizona along a favorite section of highway for me.  Always like seeing the observatories atop Kitt Peak going by. 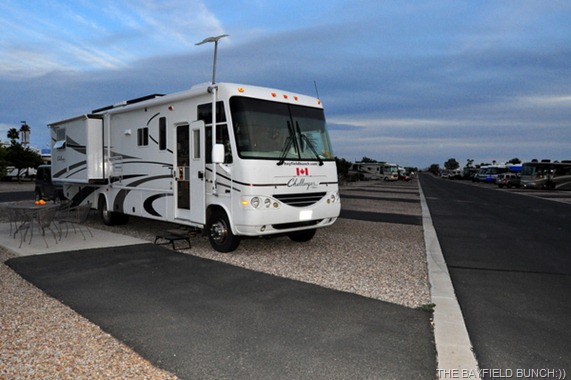 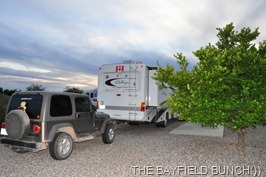 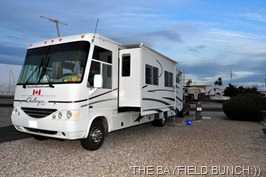 OUR SITE FOR THE NITE AT LAZY DAZE

Had originally planned on heading for an RV repair facility in Sierra Vista but as we approached Tucson we remembered a place we had been too once before for a water connection leak problem.  It was the last week of 2006 when we headed up from Patagonia Lake in our truck and 5th wheel at that time to a place called Beaudry’s RV.  Beaudry went belly up awhile back and it is now owned by Lazy Daze.  And, that’s where we are.  And, coincidentally we think we are in exactly the same spot we were 5 years ago.  And here’s the second coincidence. 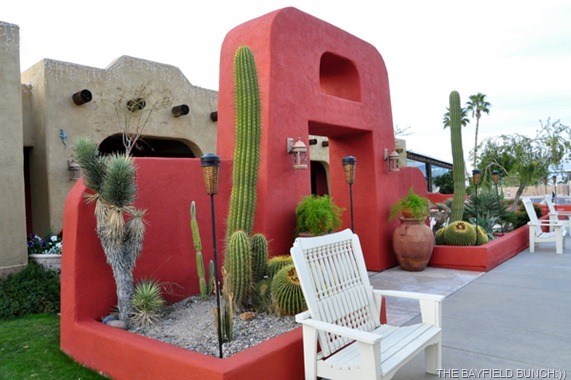 While Kelly was inside registering us for the night a white truck pulling a Cameo 5th wheel pulled in behind us.  The fellow saw ‘Bayfield’ on the back of our rig so asked Kelly inside if she was from Bayfield Ontario.  Turns out the 5th wheel couple bought their rig at Stormrunner RV in Bayfield.  Stormrunner owners Dianne and Harry are right this minute in Arkansas making their way west.  We plan to meet up with them somewhere out here in the wild wooly West this winter. 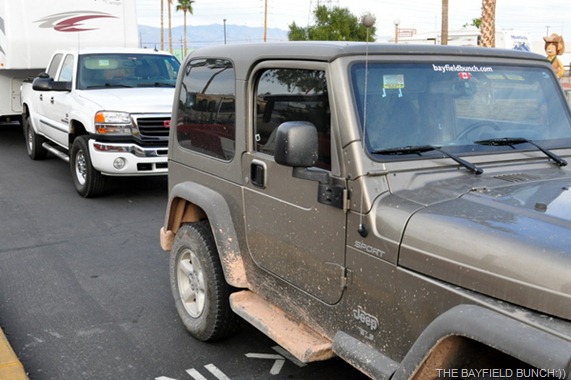 There is a large multi-bay repair facility here at Lazy Daze so we plan to be at their door as soon as they open in the morning.  Being without a toilet we are hoping they will understand our need for speed.  Maybe our bulging eyeballs will work in our favor. 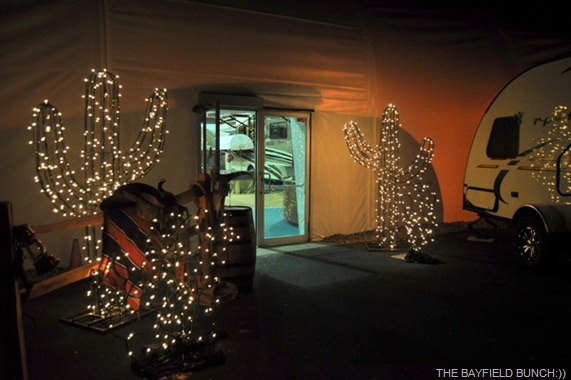 I remember how uncomfortable I felt last time we were here in this very upscale manicured RV Park.  Nothing has changed and I will be a fish out of water for as long as we are here which I am sure hoping will not be any longer than tomorrow.  Every thing is really nice here but it’s just not my kind of place!! 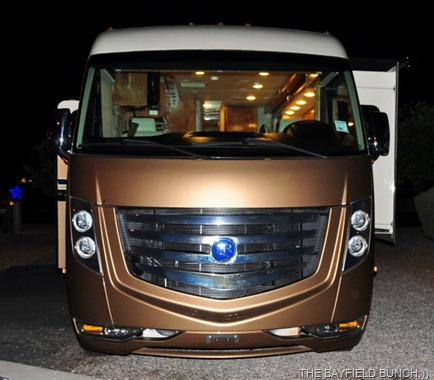 KIND OF LIKED THIS ONE

How nice to have unlimited water, a flat surface to comfortably walk on and brighter electricity.  Unbeknownst to us there was a big Western Days show here this week-end at Lazy Daze.  Many RV models are all set up for display.  Luckily we just missed all the hoop-la and all the people are gone.  Nobody in the space on our passenger side and the next 10 spaces on the driver’s side are all empty.  Could they have known the Bayfield Bunch was rolling in.

Some display coaches were still open with all their lights on so after it got dark we went to the row behind us and clambered around in some of the rigs.  Pretty spoofy with prices ranging from $244.000 to $710.000.  Surprisingly, it was the cheaper gasoline powered $243.000 Trip model we liked best.  Figured they would only offer us $1.49 for our coach so we scurried back to the rig 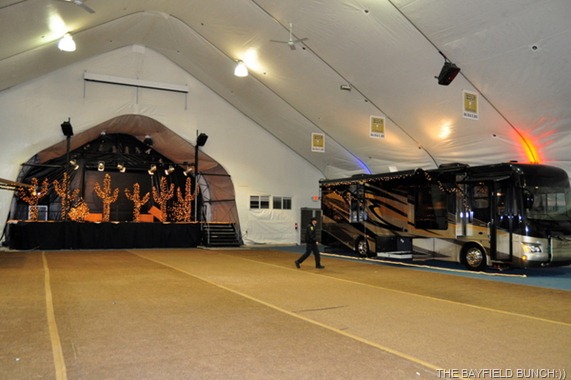 THAT’S THE SECURITY GUARD WALKING ACROSS THE FLOOR…SHE HAD JUST TOLD US QUIT PLAYING IN THE COACHES:))

Not sure where the blog will be coming to you from tomorrow night but I’ve got my fingers crossed it will be far and away from the big bright city lights….10-4:))

And TIOGA GEORGE gets a Mexican police escort complete with flashing lights from a Wal-Mart parking lot to a Sam’s Club parking lot.  D’ya suppose that police officer might have been working for Sam’s Club:)) 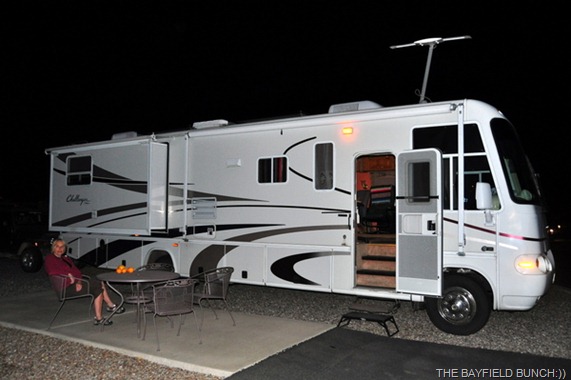 City Boy: Say, Dad, how many types of milk are there?
Father: Well, there's evaporated milk, buttermilk, malted milk, and --but why do you ask?
City Boy: Oh, I'm drawing a picture of a cow, and I want to know how many "spigots" to put on her.