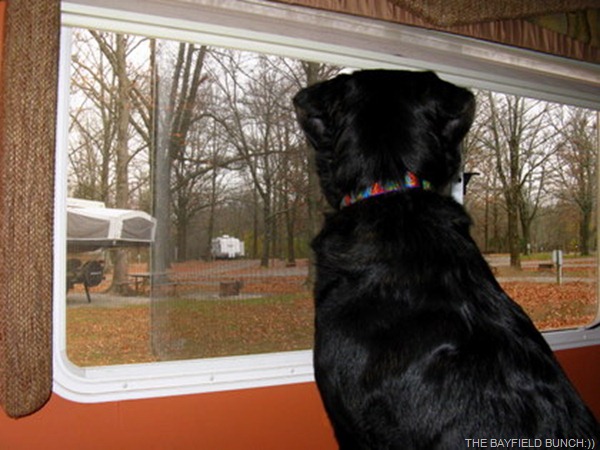 PHEEBS KEEPS AN EYE ON AN RV MOVING IN A BIT CLOSE TO US AT FERNE CLYFFE STATE PARK, GOREVILLE ILLINOIS
The winds gusted all night and Kelly had to finally pull in the bedroom slide.  Not the best night’s sleep and yes, we had the proverbial train whistles in the background. But, that’s OK because there is something very hauntingly reassuring about train whistles in the night. 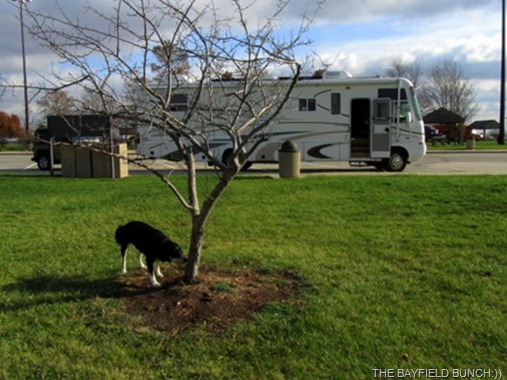 PIT STOP AT AN ILLINOIS REST AREA
Sunday night’s weather channel issued a wind advisory for Sunday saying the winds would pick up as the day went on so we figured we had better get an early start and make some fast tracks out of the area.  Our tracks weren’t fast enough…….Rolled out of the Cracker Barrel parking lot at 6:35 a.m. and as soon as we climbed aboard I-94 and pointed our nose to the southwest we were buffeted by heavy wind gusts.  Not good!!  Fortunately, because it was Sunday we did not have a lot of traffic to deal with and making our way through the maze of concrete and pavement in Gary Indiana went well.  I prefer to do heavy traffic areas on week-ends if at all possible. 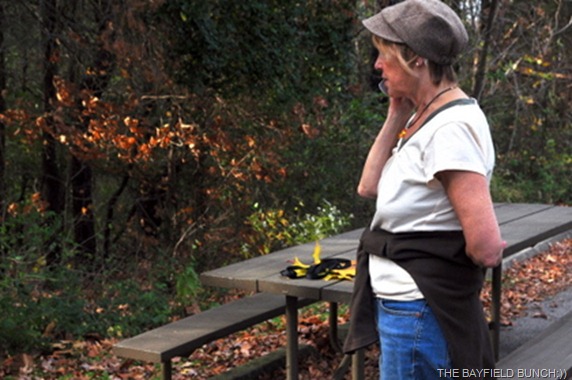 KELLY, ALWAYS ON THE JOB, FIELDS A DEER PARK LODGE CALL
Picking up I-57 put us head to head with the hard charging southwest winds and for the next seven and a half hours we went toe to toe with the heavy wind gusts.  At one point about 60 miles north of Effingham we rounded a long curve in the road and the winds began hitting us broadside with enough force to move us into the accompanying lane several times.  Only thing we could do was cut our speed and hang on tight.  This is all very flat farm land between Chicago and Effingham with few trees or wood lots to break the wind whipping across the flat landscape.   I knew if we could get ourselves south of Effingham we would be in better shape because of all the forests along that stretch.  I would have to say we experienced some of the strongest wind bursts today that we have ever been in. 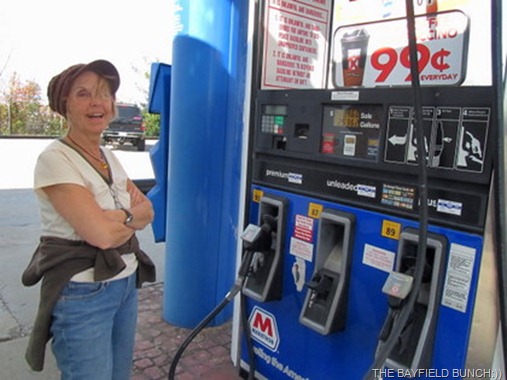 FUEL STOPS ARE ALWAYS A TWO PERSON OPERATION FOR US…KELLY DEALS WITH THE GAS PUMP COMPUTER AGGRAVATIONS AND I AM THE GAS JOCKEY WHO ‘FILLS ER UP"’
The destination I had in mind since leaving the Indiana State Line was a quiet place in a forest that we had been to several times before.  FERNE CLYFFE STATE PARK is about 2 miles east of I-57 near a little place called Goreville Illinois which in turn is about 200 miles north of Memphis Tennessee.  I knew if we could make Ferne Clyffe we would have a sheltered place from the wind for the night.  Kelly and I, on our way back from Big Bend in Texas back in 04 actually pulled in here on New Year’s Eve of 04/05.  Not a soul around and we spent a quiet restful night totally alone in winter’s big silent forest.  I like memories like that:)) 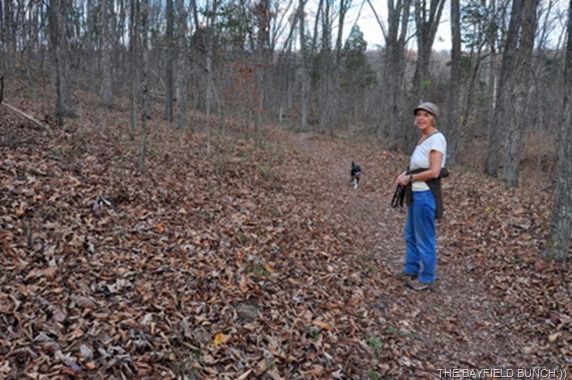 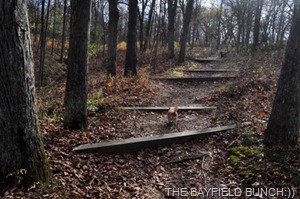 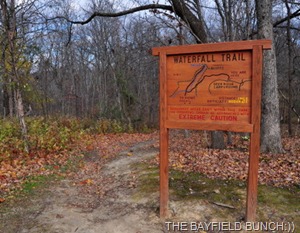 WALKING A FERNE CLYFFE TRAIL THIS AFTERNOON
Because of being beat up by the high winds today our gas mileage took quite a hit.  Filled up in Gary Indiana this morning and filled up again this afternoon in Mt. Vernon Illinois.  Wanted to keep the tank on the full side to give us extra weight.  We do have an onboard computer that will give us our miles per gallon but those are numbers I really did not need to see today!!  On the positive side, we have had many great tailwinds over the years that have whisked us up and down the highways and byways with barely a foot on the gas, so today was just a little payback time for us:)) 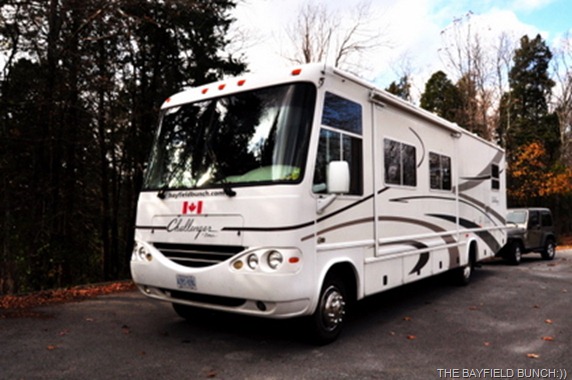 NOT OFTEN YOU SEE THE BAYFIELD BUNCH PARKED ON A SOLID FLAT PAVED SURFACE (FERNE CLYFFE STATE PARK)
Both Kelly and I both got a hankering for peanut butter and toast this morning while southbound on I-57.  With a simple push of a switch on the dash I had the generator running.  The cook was in the Galley, the toast was in the toaster and minutes later I had a big Cheshire grin on my face and a big slice of toast and peanut butter tucked nicely away in my tummy.  Yep, I sure like this rolling Motor Home concept alright:)) 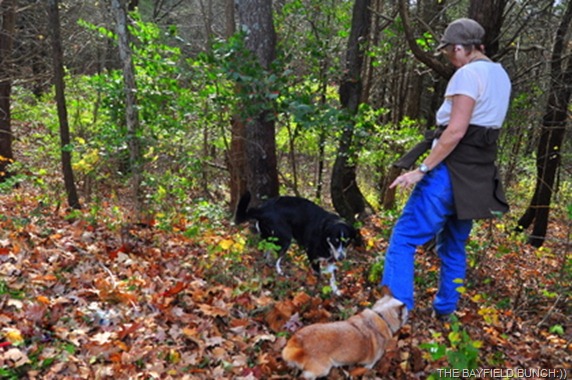 NICE TO BE OUT OF THE TRAFFIC AND BACK INTO A PEACEFUL FOREST SETTING
I think one of the greatest feelings while traveling is that point of destination, wherever it is at the end of the day.  After shutting down the rig, putting out the slides and taking care of any other set up procedures there comes a very precious moment of the trip.   You walk over to your favorite spot whether it’s a recliner, couch, bench seat at the breakfast nook table or just a good old comfy favorite chair and you just kind of collapse yourself in a very relaxing and comfortable heap.  A big sigh of relief, an immediate release of stress, and a warm sense of accomplishment knowing that you didn’t screw anything up too badly since getting up that morning.  I think that is always my favorite part of any traveling day. 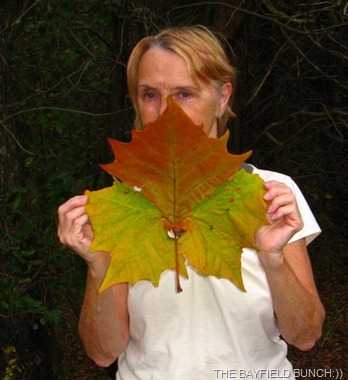 KELLY FINDS A VERY LARGE SYCAMORE LEAF >>>
I think our highs today reached the mid 70’s and and just now at 6 p.m. I see it is 71F.  I was just outside with the Pheebs and I could hear crickets and frogs in the darkening woods beside us.  The wind was roaring in the treetops and we were as snug as a bunch of bugs on the forest floor below.  Now, how nice is that. 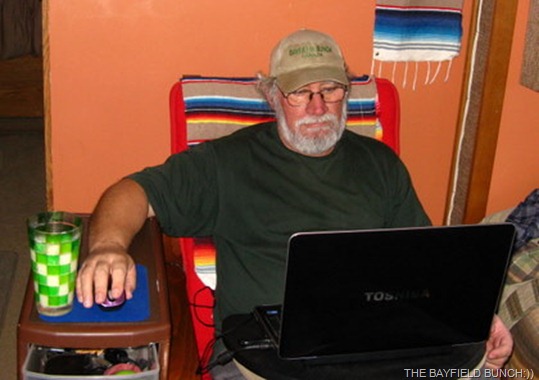