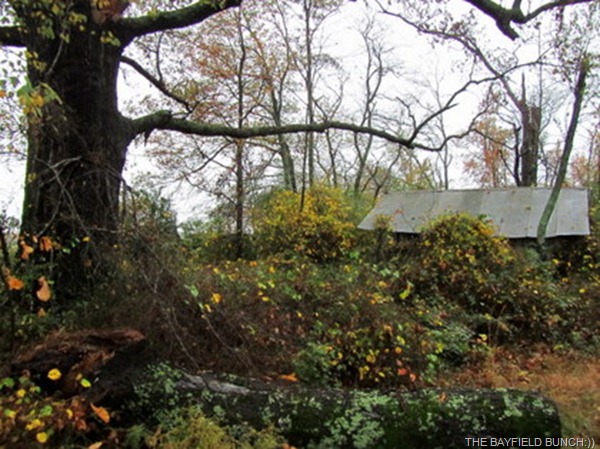 T-RICK’S MAY NOT BE EVERYBODY’S CUP OF TEA…..BUT I LIKE THE SCENERY HERE  (ALL OF TONIGHT’S PICS TAKEN WITH MY CANON SX210iS)
Sure got noisy real fast in our rig this morning at 4:30 a.m.  A hard driving rain was quickly upon us and anyone in an RV knows what a clatter on the roof that can be.  Even had us some good old thunder boomers going on.  Woke the whole crew up except for me who was already up of course.  Going backwards through these time zones is not easy for folks like myself.
In case anyone is interested in seeing a few scenic Autumn photos or reading why I think this T-Rick RV Park we stayed at fell on hard times you can access my post from October 26/09…T-RICK'S RV PARK. Remember, this Park may not be everybody’s cup of tea, but we have found it handy for an overnighter now and again.
And a big welcome to JED’S MOM as our latest Blog Follower.  Nice to have you aboard on our latest journey to the great American Southwest.
Dennis and Donna from THE CAVE DWELLERS left Sandwich Illinois for Louisiana Monday morning and were a day behind us on the I-57 route.  Because of tornado warnings in the Memphis area they stayed put at Rend Lake for an extra day.  Rend Lake is only a few miles north of Ferne Clyffe where we stayed a couple night’s ago.  Despite the high winds it looks like we made it through that Memphis area just in time.
We were in no hurry to land ourselves in the Little Rock morning rush so it was 9 p.m. before we rolled out of the T-Rick RV Park in Hazen, Arkansas.  We had the windshield wipers on full tilt from the time we left Hazen, all the way through Little Rock and right on down I-30 to Arkadelphia.  Rains were heavy and visibility at times was very poor.   But, that’s all part of the traveling excitement.  And we did slip slide our way through Little Rock with no problem. 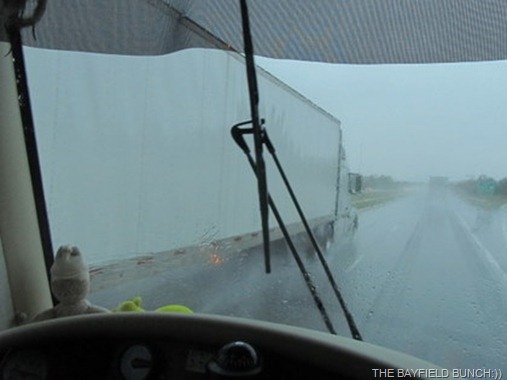 THIS PRETTY WELL SUMS UP OUR WHOLE DRIVING DAY
Crossed the Texas State line at 12:10 and 20 minutes later we were seated in a particular Cracker Barrel in Texarkana that we have been to 4 or 5 times before.  There is a big vacant field next door so it was a good spot to let the guys out for a good run.   Kelly too. Cracker Barrel has $5.99 lunch specials so that’s what we ordered.  Kelly had a pile of green leafy looking rabbit food stuff and I had yummy mashed potatoes, beans and meat loaf:))    The thought occurred to me sitting there that this was probably our last Cracker Barrel for awhile because there are no large city areas ahead of us now for quite awhile.  Little did I know we would be in another Cracker Barrel parking lot just three and a half hours later. 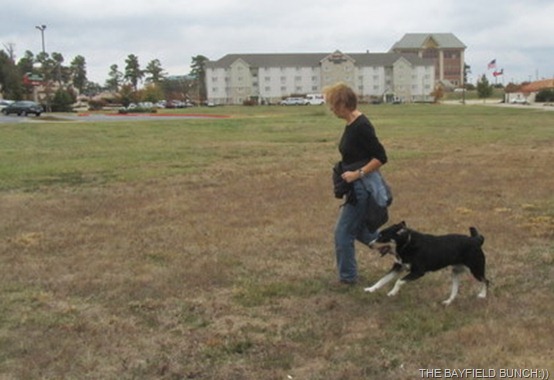 KELLY AND THE PHEEBS DO A FEW LAPS BEFORE WE HEAD INTO THE TEXARKANA CRACKER BARREL
Headed southwest on I-30 heading towards Dallas.  Sometimes we cut off at Boston Bar and begin a long detour north around Dallas but today I figured we would try something a little different and slip in closer to Dallas as far as Greenville and then head around Dallas via highway 69 to Sherman and Gainesville.
Kelly spotted a Wal-Mart coming into Greenville so figured we would just hole up there for the night.  This whole area has been under construction for 3 years now so we kind of got ker-fuddled somewhere.  In attempting to get ourselves back on track in the increasing traffic Kelly spotted a Cracker Barrel, so we wheeled ourselves in.  Cracker Barrel welcomes RV folks for overnight stops so that is where I am typing this from.  Nice spot in the parking lot with a large field for the doggy guys right beside us.  In appreciation for Cracker Barrel’s overnight RV policy we will have breakfast here in the morning.  Wednesday night I suspect we will be out on the Texas plains somewhere.  And how the heck did Cracker Barrel sneak two pieces of Chocolate Pecan Pie and ice cream into the rig tonight anyway?? 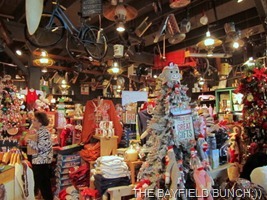 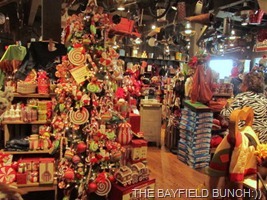 FOR ANYONE WHO HAS NEVER BEEN IN A CRACKER BARREL….THIS IS THEIR GIFT CLUTTERED LOBBY….I’M NOT MUCH FOR GIFT SHOPS BUT I DO LIKE THE COZY COLORS AND LIGHTING
Ok, about the black tank incident…..since you asked.  The problem actually began last May when I drove the Motor Home over to Exeter Ontario where there is a dump station in a city park.  Had a bit of goop left in the tank from the final days of our return trip home at the end of March.  Hooked up my aging sewer hose and pulled the valve.  ‘Poof’…..part of the hose gave way around the clamp creating a small mess before I rammed the valve closed again.  Now I had a problem.  Still some soup in the tank but no sewer hose to get it out with now.  Cleaned up the mess, hopped into the rig and drove a few blocks to a Canadian Tire Store where I bought a brand spanking new Rhino extendable fancy-do sewer hose.  Back to the park, hooked it up and finished up the job at hand.  Hubba Bubba no trubba.
Never had occasion to use that new hose again until Monday afternoon at the T-Rick RV Park in Hazen, Arkansas.  Hadn’t planned on emptying the black tank because there was only 3 days of grumblys in it but thought, what the heck I might as well get some practice in with my new hose.  Well, I was obviously out of practice because I do not think it was a problem with the new hose.  I think it was a problem with my ‘not paying attention to what I was doing!!’  The end of the hose is slightly different than my old one and I think I did not fasten it onto the pipe securely.  Pulled the lever and….’Whooooosh!!’  Jumped back so fast I did not get the lever pushed back in and within seconds I had the whole contents of the tank dancing along the edge of the concrete pad running under the motorhome to the other side and out onto the road.  I immediately pulled the lever on the gray tank and let that water pour out right behind the goopy stuff to chase and dilute the mess I had just made.  I followed that with the garden hose and hosed down the whole area including the bin. 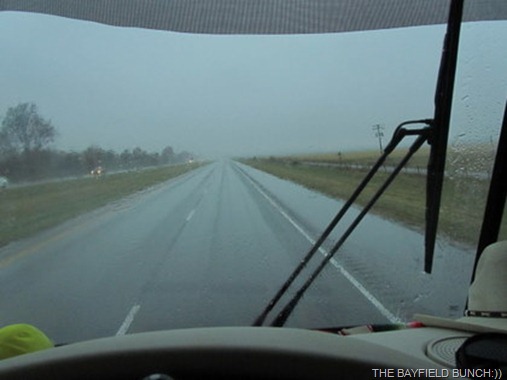 Despite the obvious big mess, I quickly realized two things had worked in my favor.  First, the tank was not full and two, all the neighboring RV’ers were away at work.  Construction workers from Kansas working on an I-40 road project nearby.  I was able to have everything cleaned up before anybody arrived home.  If anyone had asked about all the water on the road I was prepared to tell them I just washed the Motor Home.  I could just imagine the response I could have got…."well, your Motor Home must have been pretty dirty because that water sure looks brown and muddy.  Oh dear!! 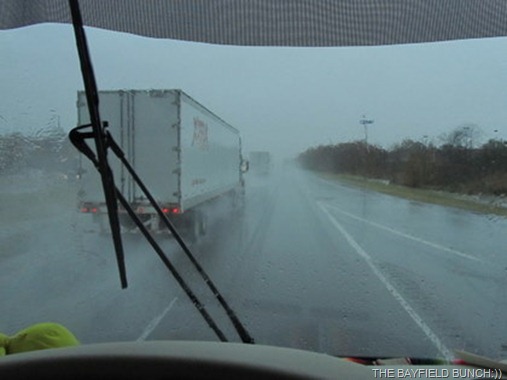 For my next dump I will insure I have that hose on securely and then will pull the valve on my gray water first and see if everything holds together.  Then, I will tie a long rope on the black valve and go stand behind a large tree and give the rope a yank.
Now, to add a little insult to my misadventure I can tell you that before dumping the black tank I had had a shower and put on a pair of clean jeans and shirt.  Boy, I sure got that procedure in the wrong order didn’t i.  And ‘NO’ I did not take any pictures!! 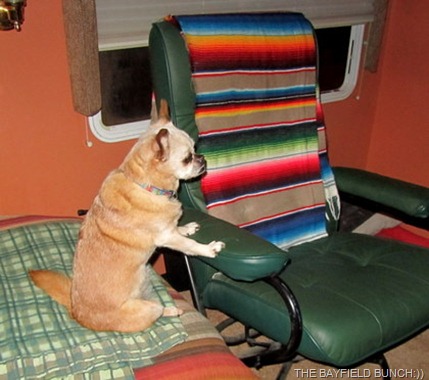