SLIPPED INTO AJO TO HAVE A LOOK AT SOME MURALS HERE IS SOMETHING FOR YOU MUSIC BUFFS…IN TONIGHT’S PHOTOS YOU WILL SEE MUSICAL NOTES PAINTED INTO A MURAL ACROSS A BUILDING IN AJO, ARIZONA…PAINTER MIKE (WANDERWOLF) TOLD US THESE ARE THE ACTUAL OPENING NOTES TO A VERY WELL KNOWN WESTERN SONG WRITTEN MANY YEARS AGO.  I WILL TELL YOU THE NAME OF THAT SONG AT THE END OF THE BLOG:))

A sunny 74F under another big bright sunny Arizona sky today.  Had the weather not gone downhill in New Mexico last week we might still be there but we decided before we left home this year that we just wanted to be where it’s warm.  I think we’re headed for 80F+ tomorrow:))

We slipped back into Ajo again this morning to pick up a few things at Olsens IGA that we had forgot the day before.  Nice well stocked grocery store.  You will remember us visiting Mike (WANDERWOLF) Saturday so we thought we would check out some of his murals in Ajo.  He had told us about one in particular that he worked on with fellow artist HOP DAVID.  Located on the south facing wall of the Ajo Copper News building we wanted to have a look at that.  He told us they put a lot of ‘little things’ in that mural and the more you look at it the more you will find.  These ‘artsy’ type people are a very clever bunch you know and in the photos below you will see why. 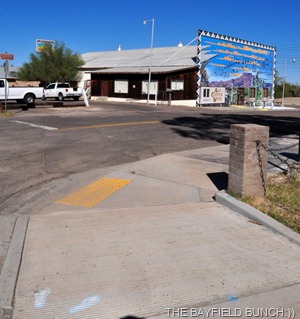 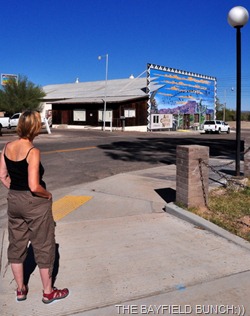 NOTICE THE 2 BLUE FEET PAINTED ON THE SIDEWALK IN LEFT PHOTO….KELLY STANDS ON THOSE BLUE FEET AND CAN SEE HOW THE NATURAL WAY THE BUILDING ON LEFT’S ROOF LINES BLEND INTO THE PAINTING 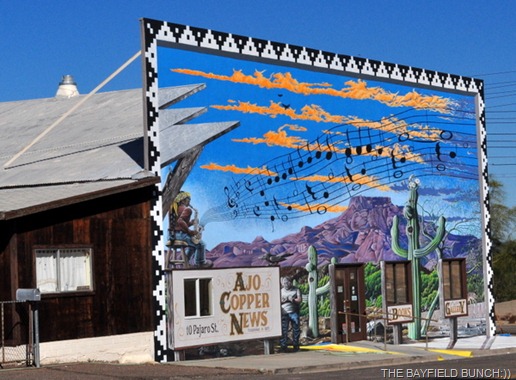 I have always thought of Ajo as kind of a tumble down town that has fallen on hard times since the closing of the big copper mine years ago.  Yes, it has fallen on hard times but we drove through a couple neighborhoods today that were certainly not tumble down.  Noticed they had a nice park, community center and children’s playground.  Talked to a Snow Bird from Alaska at the Laundromat a couple of days ago who has been wintering in Ajo for the past 15 years. 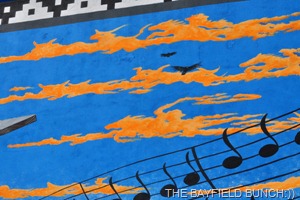 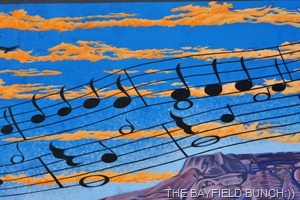 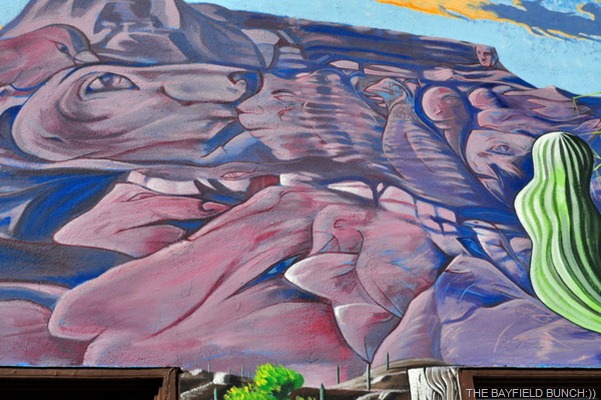 MANY HIDDEN FACES AND CREATURES IN THIS ROCKY MESA 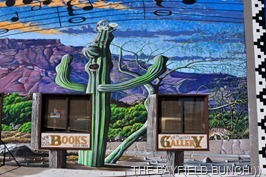 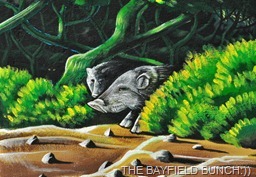 Some readers have mentioned about the BLM land just south of Why.  It’s at mile marker 2 and we were actually boon docked there in early 08 before moving to Darby Wells at that time.  It seems the Verizon signal is smokin hot down around Lukeville at the Mexican border but tapers off further north where we are.  The BLM campground at mile marker 2 is about half way between Lukeville and Ajo. 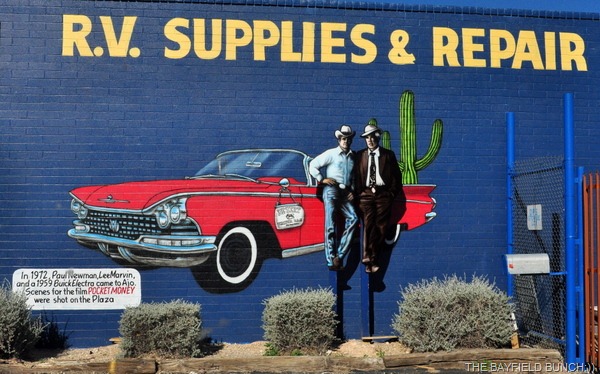 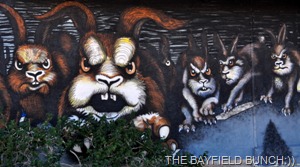 We considered moving down to Why but the scenery at that spot is not nearly as nice as where we are.  Also, our Verizon is working slightly better now that we have changed a couple of things.  Moved our router up on top of the Motor Home roof plus we’ve discovered if only one of us is on line at a time things seem to work better.  Still no cell phone but Kelly is able to access her Deer Park Lodge messages now by using Skype so we plan to stay where we are until our black tank is ready to be dumped and at that point we’ll head for Gila Bend, dump our gray and black tanks, take on water and decide where we will head from there.  Could be by the end of this week. 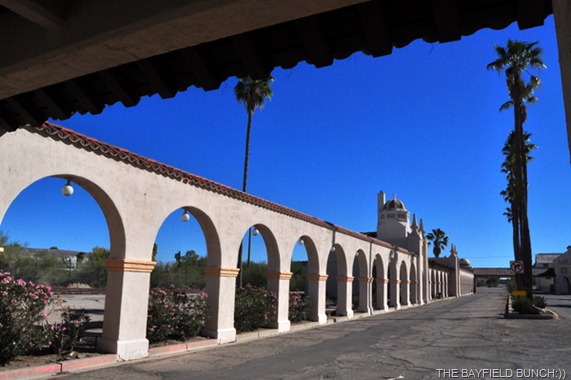 AJO HAS A VERY PRETTY DOWNTOWN DONE IN A SPANISH STYLE

Someone asked what our co-ordinates are at Darby Wells road.  I’m hesitant to give that out until after we have left.  One never knows just who is reading these blogs of ours.  I can tell you that our nearest neighbor in a Class C is about a quarter mile away barely visible.  There are maybe a half dozen rigs in the area but they are a mile or more south of us scattered all happy and contented among the tall cactus growths. 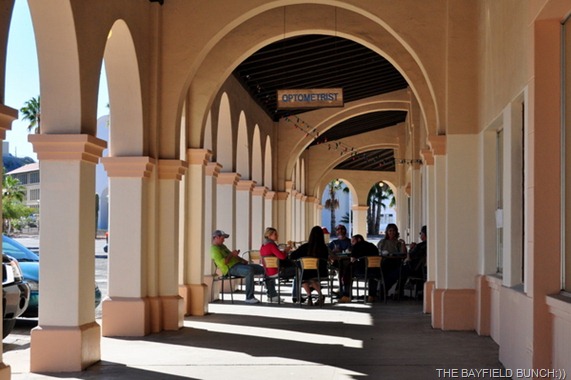 Had hoped to get some nice Moon and Venus photos tonight but I see they have moved too far apart now for me to capture them in a single telephoto frame. 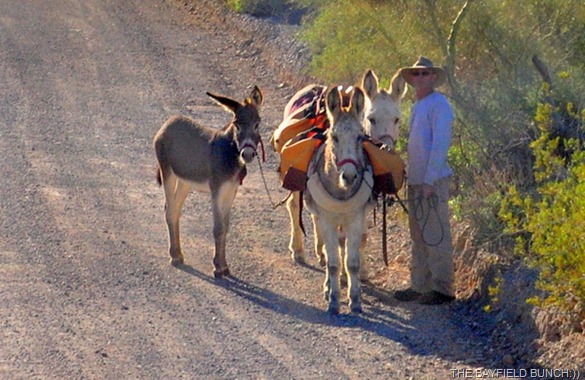 It was nice enough tonight for me to write part of today’s post outside while waiting for the Moon and Planet Venus to appear in the evening sky. 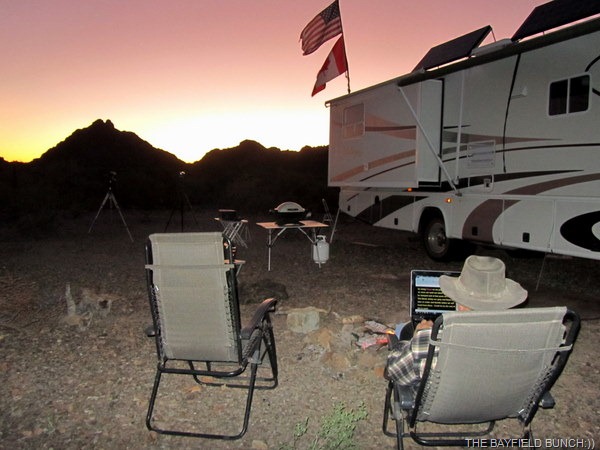 GROANER’S CORNER:(( Friend: "I suppose you carry a memento of some sort in that locket of yours?"
Woman: "Yes, it's a lock of my husband's hair."
Friend: "But your husband is still alive."
Woman: "I know, but his hair is gone."