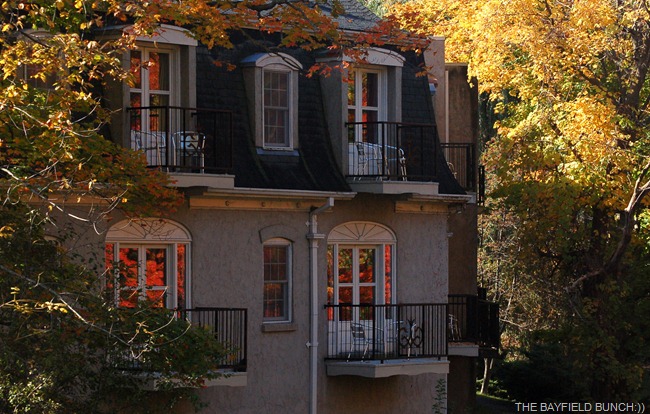 ONE OF THE GUEST HOUSES AT THE BEN MILLER INN, BEN MILLER ONTARIO
Our cold gray Novemberesque morning magically morphed into a fine late October Autumn afternoon. Nice day for a second walk in the forest with Ram Jam Pheebs the Rocket Dog. Been a few years since I have deviated from the trail so we made our way over an embankment and down along a creek through a thick and soggy cedar swamp. Didn't take me long to get a soaker and muddy up my new blue jeans pretty good. But, that's what Saturday afternoons and boys with their dogs are all about:))
And would you believe we both forgot about the last dog obedience class this morning.  Missed last week when Kelly was working and I was under the weather.  Pheebs and I were about two thirds the way around the trail this morning when I suddenly remembered our morning class, but it was too late:((  Not as bad as when I signed up early for a computer course at a local high school back in the late 90’s…………. and then forgot to go!!
Loaded up our satellite dish and tripod this morning and took them down to our handyman and neighbourhood friend Bruce’s place. Between the two of us (mainly Bruce) we were able to figure out the logistics of the tripod, drill a hole here, tighten up some nuts there and exchange a few brain wobbles before finishing up the project. Tripod and satellite dish are finally good to go.  Bruce is the same fellow who rebuilt our utility trailer last summer, did some renovations in our rig over the years and looks after our place when we are away for the winter. 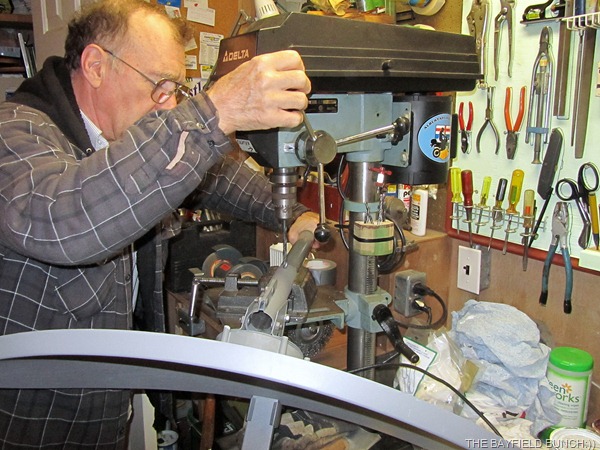 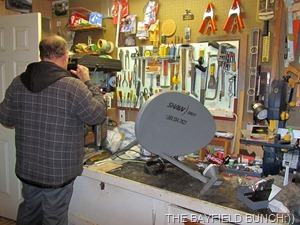 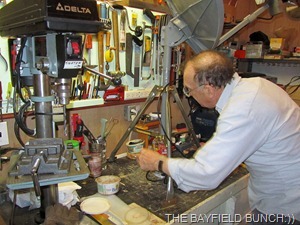 In Friday's post I talked about why I like Blogs, Bloggers and Blog Land. Here is another reason I find blogging not only interesting, but educational as well. How many of us would know this country as well as we do if it was not for our fellow RV Bloggers. Yes, we all learned about History and Geography in school but how many of us were really interested in all that boring stuff at the time. Too many other cool things going on in our younger lives to think about traveling to distant parts of the country.  Every day now is a history lesson as we read and follow one another's blog travels around our fair land. We are all far more knowledgeable about travel and the ways of travel than any of our previous generations. And, through the countless photos we all share, the land becomes much more familiar and personnel than the usual old generic history book pictures of yesteryear.  And, a lot of those old history book photos were in black and white too!! 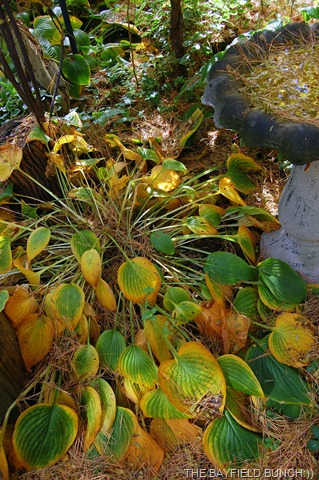 For any of you RV folks with Olympian Wave 8 heaters in your rigs you might want to read KAREN'S POST  about a couple simple maintenance tips which could save you costly repairs with your unit. We at the Bayfield Bunch have a similar propane powered unit called a Legacy Blue Flame.
While searching for some additional info on our Blue Flame heater this morning I came across a post I had written back on April 22nd 2009 entitled, AFTER A FEW WRONG DECISIONS...HERE ARE SOME RIGHT ONES.   Found it interesting to see my line of thinking at that time. Apologies to Florida of course.
I still have not made much progress in the Google+ department. Have received a lot of emails from folks adding me to Circles or something but I just have not been able to perk my interest in another social media site yet. I think I may have added all the folks to my Circles of whatever Circles I seem to have but of course I'm not sure. I'm just kind of going around in circles I guess looking for a logical reason as to why I would need Google+. I also receive occasional emails from people about joining something called 'linkedin'. Again, I have no idea what this is so have passed on the invitations. And then there is something called 'Stumble Upon' but after giving it a quick look see I decided that wasn't something I was interested in either. Like I said in a previous post a few weeks ago......my interests are a changing. 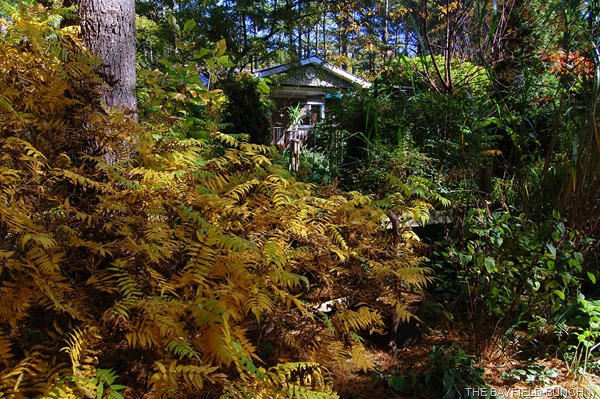