THINKING OF NEW PALS REMINDS ME OF OLD PALS 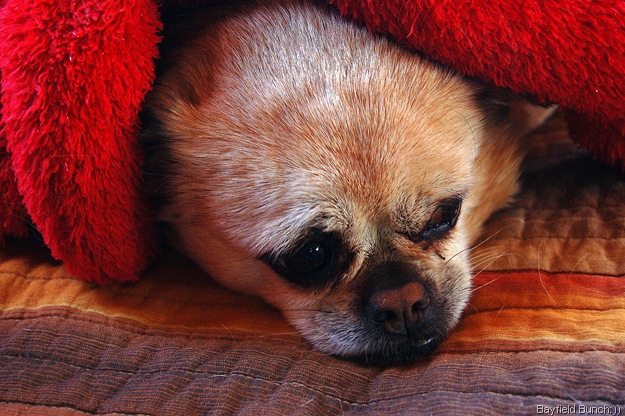 A SLEEPY MOTORMOUSE MORNING IN BORREGO SPRINGS,  CALIFORNIA...FEBRUARY 2010
So nice to step out the door first thing this morning into some nice cooler 71F temperatures.  I wasn't fooled by that though knowing full well the temps could ramp up fairly quickly again.  Had a few errands to run in Goderich & decided the little Motormouse might be better off staying home in the A/C.  Of course she didn't think so & made quite a fuss when she caught me sneaking out the door without her.  I skulked off to the Jeep under a huge cloud of guilt following me.   And, the cloud only got bigger when I saw that sad little furry face watching me out the window every step of the way.  I steeled myself & quickly hustled out the driveway with nary a look back.  I was off to the city of Goderich & my first stop at the Department of Transportation. 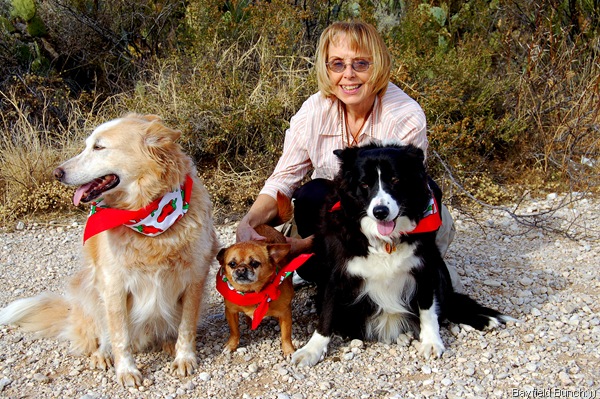 The Canadian Government did well by the Bayfield Bunch this morning.  It was time to renew all our vehicle license stickers.  $264 for the Motor Home, Santa Fe, Jeep & Motorcycle.  My drivers license was also up for renewal & a new photo & that was another $74.  My health card was due for renewal too......and that was free:))  Ya-hooie Louie:)) 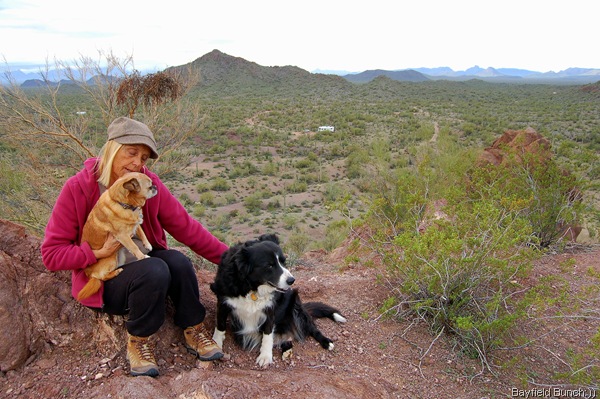 POOR MAX DIDN'T MAKE THIS HIKE BECAUSE HE HAD A SORE PAW & HAD TO STAY BEHIND IN OUR RIG FAR OFF IN THE DISTANCE......DARBY WELLS ROAD NEAR AJO ARIZONA....MARCH 2008

Up until a couple years ago I always enjoyed stopping in various places for a nice mess of bacon & eggs for breakfast.  Kind of lost my taste for that plus the price of a bacon & egg breakfast just got too ridiculous!!  After I left the vehicle license bureau this morning I had an old rare hankering for bacon & eggs so stopped into the Burger Bar on Kingston Street, Goderich.  Would you believe I had a great bacon & egg, toast & jam plus coffee breakfast & even got change back from a $5 bill.   Now, where else on this planet can you get a great deal like that....especially with coffee included. 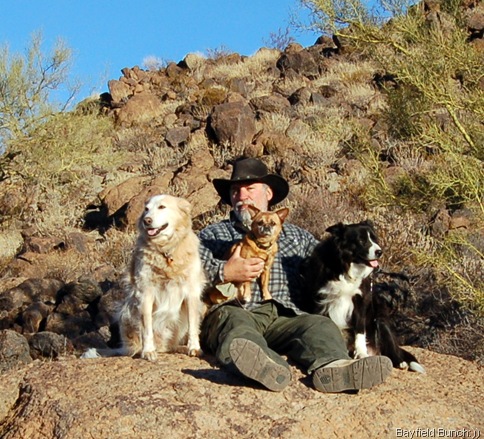 ME & THE GUYS AT HICKIWAN TRAILS RV PARK NEAR WHY, ARIZONA JANUARY 4TH 2007

RETIRED ROD & LOYCE have fired up their rig & left Kansas City heading North to South Dakota in an attempt to escape the oppressive heat. So far they are not having much luck as Rod talks about the wind gusts burning his face & his shoes sizzling in the 105F heat. Fortunately for Rod there are somewhere in the neighborhood of 7,000 Wendy's burger joints stretching across North America........all with air conditioning:)) 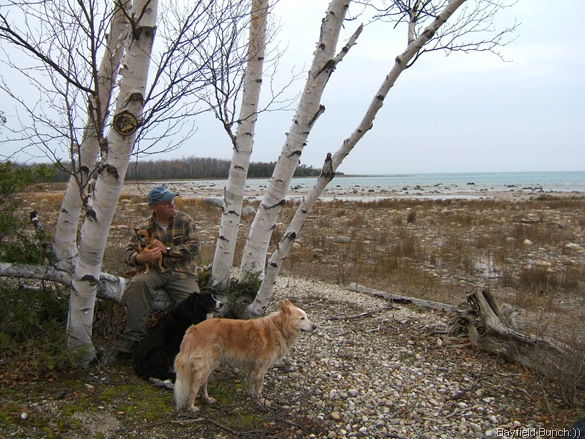 James Strick has joined us as our latest Blog Follower.  Welcome aboard Jim & thanks for taking an interest in the Bayfield Bunch.  Blogging waters are not always calm here but we do try to keep things under control & interesting:)) 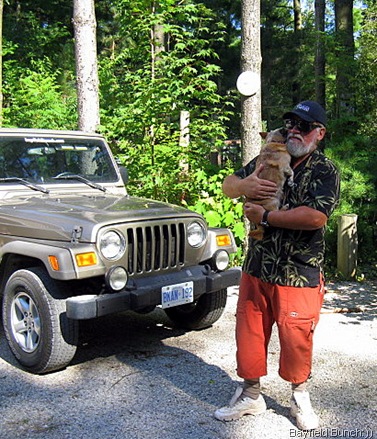 OH OH, SOMEBODY IS FEELING SAD ABOUT NOT GOING FOR A JEEP RIDE
Received an email this afternoon regarding a one & a half year old Lab/Border Collie mix we had been interested in last week.  (looks a lot like Checkers) The dog had been adopted & gone to a home on Sunday but was already back at it's Foster home today.  Didn't take Kelly long to phone the lady at the Foster home for a chat about.....Lexi:))  Following that phone call we were very optimistic that Lexi would be just the right fit for the Bayfield Bunch & we have made plans to go meet her Wednesday.  We are a bit partial to Border Collies because of their easy demeanor & intelligence.  Can you spell, E.X.C.I.T.E.D. 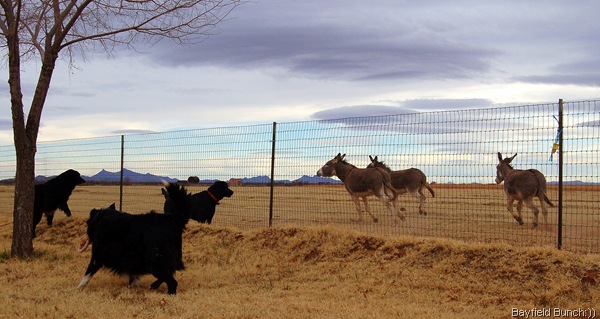 DOG & DONKEY PLAY DAYS AT THE RANCH NEAR McNEIL, ARIZONA...SOME DAYS WE HAD 6 HAPPY DOGGY GUYS FLYING AROUND ALL OVER THE PLACE:))

But, there is a fly in the ointment.  Lexi is sponsored by Animal Adoption Agency so there are rules & regulations to be followed.  Another couple has also expressed an interest in Lexi so after we meet Lexi Wednesday & the other couple meets Lexi this coming Saturday, a decision will be made by a board as to who may take Lexi home.  Lexi lives 77 miles from us so we will be in for some driving tomorrow & with any luck we will be in for a second drive maybe early next week.  The Motormouse is going with us tomorrow as well to meet Lexi.  We had really hoped to bring Lexi home tomorrow if all was acceptable, but rules are rules.................... 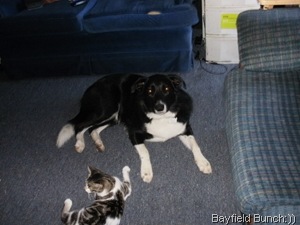 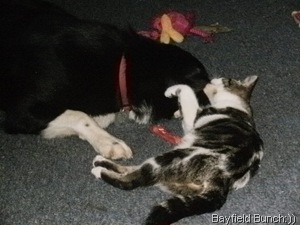 THESE ARE A COUPLE PICS OF LEXI WE RECEIVED TODAY:))

THE LAST PARAGRAPH:  It is very few RV'ers we have met who do not travel without their beloved best Pals at their side.  As I have said many times before, our lives have been so enriched by Max & Checkers when they were here.  Now, little Cora carries on in their place.  Wish us luck...................:)) 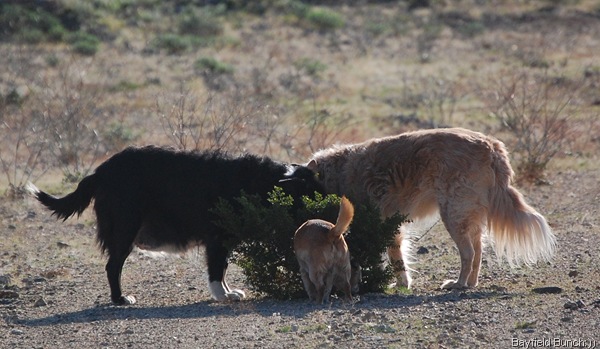