PHEEBE’S FIRST RIDE IN THE MOTOR HOME…AND MOTORMOUSE COMES TOO:))

IN OUR FRONT YARD THIS AFTERNOON  (NIKON D40 at 300mm
It is only crickets I hear in our Pine forest now with an occasional Blue Jay's shrill call breaking Nature's quiet.  Forest's are in early seasonal transition from late summer to early Autumn and the magic is already upon us.  Pheebe and I did the Pine trail twice today and I couldn't help but notice the beautiful silence in the air as we walked along the forest path.  Spring songbirds are no longer in the trees and Summer's flying insects are nowhere to be found.  Dappled sunlight filters through a Pine scented canopy of trees leaving dappled patches of light on the soft forest floor.  From now until the time we leave for the Southwest in mid October it is my favourite time of year. 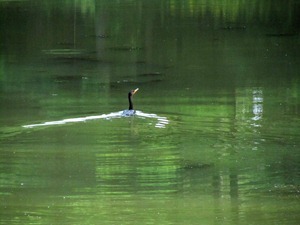 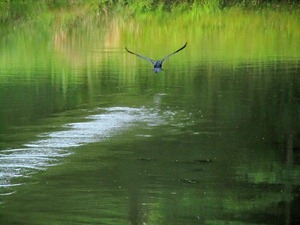 JUDY IDENTIFIED THIS AS A DOUBLE CRESTED CORMORANT ON THE POND THIS MORNING  (CANON SX21OIS)
Pheebs was due to have her stitches out Wednesday but she is doing so well we moved it up a couple days and will head off to the Vet first thing in the morning.  Motormouse is going along as well to have her nails trimmed.  I think this is the first time the newly reformed Bayfield Bunch will all be together in one vehicle. 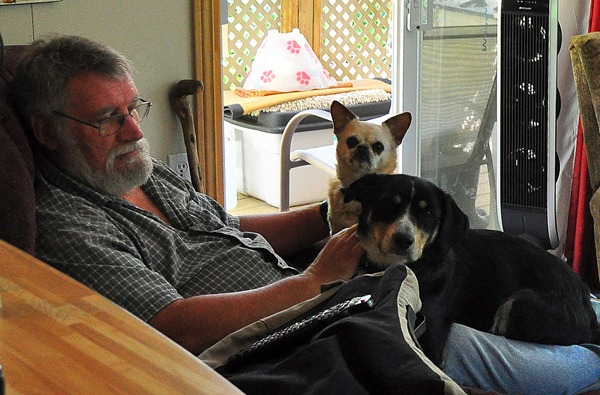 IT WAS A DOUBLE ‘LAP DOG’ KIND OF A DAY  (NIKON D90)
Been about a month since I've had the Motor Home out for a run so loaded the guys in the rig this morning to see how the Pheebs was going to like riding in the big house on wheels for her first time.  Motormouse took up her usual position on the front seat with me driving and the Pheebster free to ride wherever she wished except in the front driver's area.  Our 25 minute drive was a rousing success and Pheebe was as good as gold.  Noticed she liked riding in the exact same spot Checkers used to like.  Just behind the front cab area at the top of the steps. 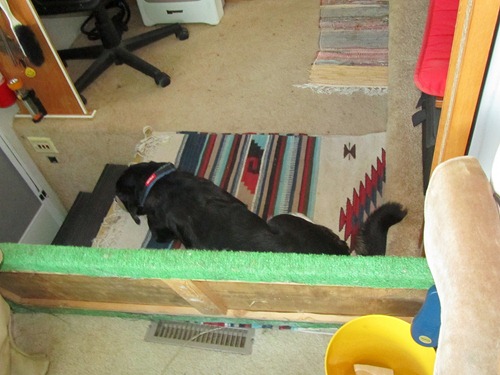 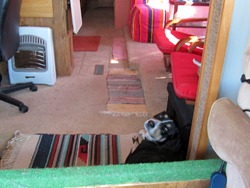 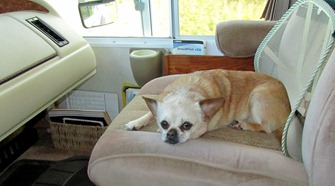 Only glitch on our morning ride had to do with our turn signals.....they weren't working!!  Four way flashers worked but not the signals.  A quick check of the owner's manual told me it was likely a 15amp fuse so with a bit of wiggling and snorting I managed to wedge myself between the front seat and steering column long enough to remove and replace the suspect fuse.  Extracted myself from my precarious position, switched on the ignition and hit the left turn signal.......holy smokes it worked!!  A very major accomplishment for AL.  He actually changed a fuse and it worked:))  Will wonders ever cease. 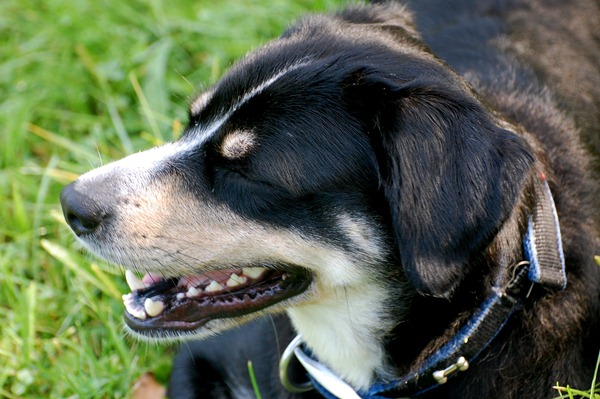 An old friend of mine who I grew up with in my hometown of Tavistock dropped by for an hour Saturday.  Craig traditionally comes up to the annual Zurich Bean Festival every August and before heading home to Kitchener he has been dropping around to say hello.  Weather was good Saturday so he was on his Motor Cycle.  Coincidentally, Craig and I had been in Goderich this past Friday for the same purpose of having a look around and taking pictures of the Tornado damage.  We didn't run into each other because I was there in the morning and Craig was there in the afternoon.  He flew his 'Grumman' airplane up to the Goderich airport and then walked all the way into the town of Goderich.  Below is a series of photos Craig took from his airplane as he flew over the town of Goderich.  You can clearly see the Tornado's path as it came ashore at the Salt Mine & then rolled on up through the town center.  Thanks to Craig for sending me the photos. 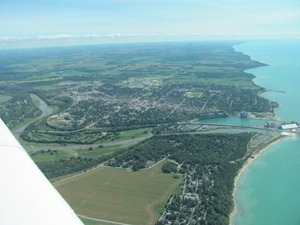 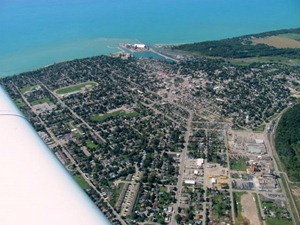 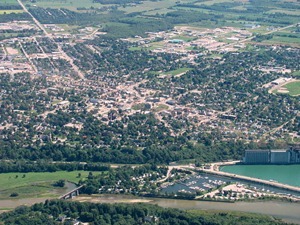 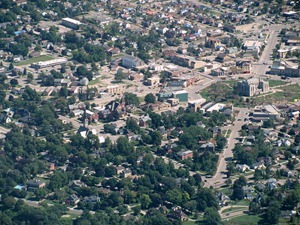 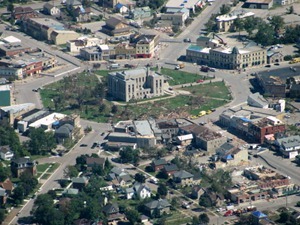 Today, Edwin K joins the Bayfield Bunch as Blog Follower 325.  Welcome aboard Ed and with any luck we should have the big wheels rolling in about 6 weeks:)) 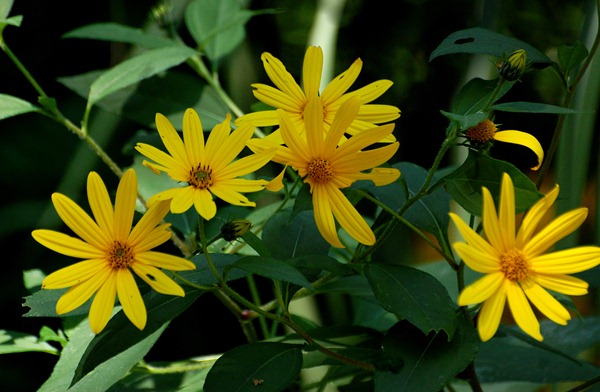 GROANER'S CORNER:((  The State of Florida had a problem. The drug busts over the years had filled their storage areas with marijuana. It was decided that their only option was to burn all of the marijuana on hand.On that eventful day, a huge mound of marijuana was torched. The fire raged, and the smoke of the weed lifted in a large cloud. Just at this time, a flock of terns flew though this cloud.
A group of forest rangers were sent out to assure the well-being of the terns. They followed this flock until they finally landed. The rangers, sneaking up on the terns, were able to observe them and issued a report that read: Not a Tern was left unstoned.
-----------------------------------------------------------------
GODERICH TORNADO DAMAGE PHOTOS....5 DAYS LATER
https://picasaweb.google.com/117858411710794543295/GODERICHONTARIOTORNADOSUNDAYAUGUST2120115DAYSLATER Tourists see the world, travelers  experience it.

Until one has loved an Animal, their  soul remains un-awakened.
OUR BLOGGER WEBSITE  http://thebayfieldbunch.com/
OUR PICASA PHOTO ALBUMS   http://picasaweb.google.com/stargeezerguy
The only thing better than right now  will someday be the memories of right  now...AL.
Posted by Al Bossence at 8/29/2011