OUR LITTLE DOGGY IS BACK TO HER HAPPY SELF TODAY:)) 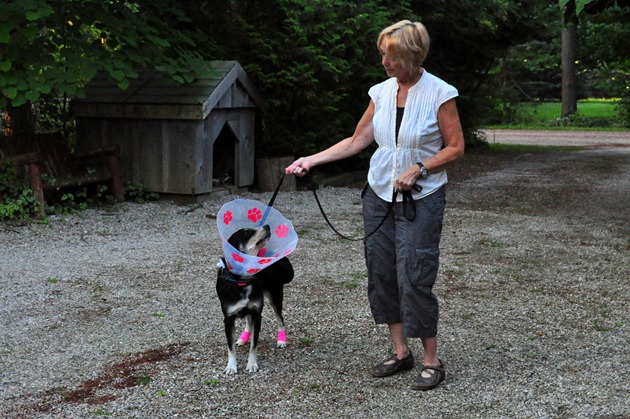 A RATHER SUBDUED MORNING WALK COMPARED TO A COUPLE DAYS AGO
So nice to have our happy little doggy girl back this morning.  We had a better night than I anticipated.  Spent the whole night in my recliner with our little cone head sleeping in Kelly's chair beside me.  No signs of any pain or sickness and this morning she was dusting off all the furniture with her tail again.  Tummy incision looked good as did the bandages on her legs.  We started the anti-biotic pills and injected some medication into her left ear for the infection.  She had a huge appetite and navigated the back deck steps with no problem.  With the exception of crashing into most everything with that cumbersome cone on her head, Pheebe was back to her happy little self again. 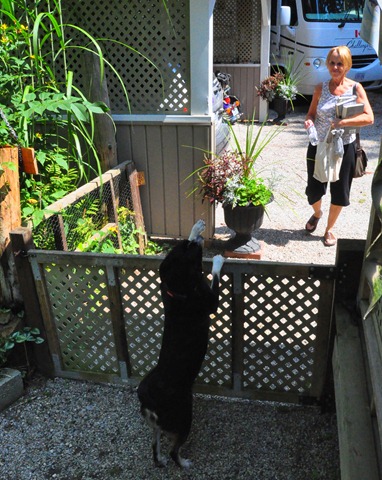 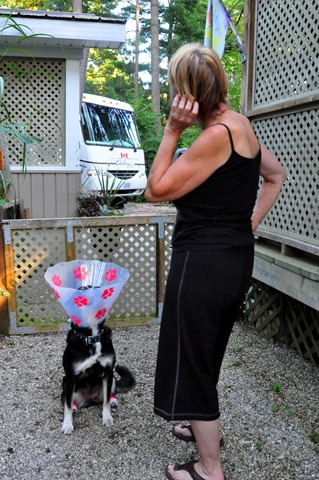 WELCOMING KELLY HOME WITH A WAVE BEFORE THE PROCEDURE                          CONED!!
Saturdays are always busy days at Deer Park Lodge for Kelly.  Been a long time since I had myself any busy days so once again I was able to spend the entire day at home with the furry Kids and make sure the Pheebs didn't get herself into any trouble pulling the cone off and picking at her stitches and bandages. 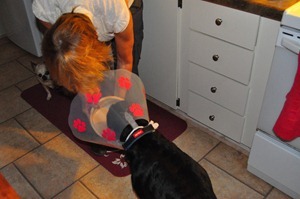 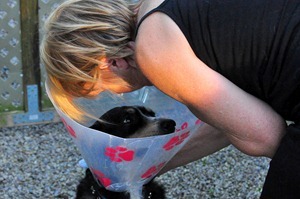 NOTICE THE CONCERNED LITTLE MOTORMOUSE BEHIND KELLY  &amp;amp; A FEW WORDS OF ENCOURAGEMENT

I'm not one much for watching movies on TV what with all the commercial breaks and everything but I did come across a movie this afternoon that I did enjoy enough to sit and watch the whole thing.  Woody Allen's 'RADIO DAYS' not only had an an excellent sound track but the movies sets and designs from the late 30's to mid 40's brought back many warm memories of family life as I remembered it in the late 40's and very early 50's.  It was 'The Golden Age Of Radio' before television.  The story is told through the eyes of a small Jewish boy growing up in New York city.  I was a small boy growing up in the small village of Tavistock Ontario, but it was the same music on our radio, the same period of time in our neighbourhood and the same everyday life we all shared as a people.  Just a nice lite easy going movie with lots of pleasant old enjoyable memories.

It's been on my mind recently to mention the importance of clouds in photographs and when I clicked on JB'S POST Friday morning I was reminded of that.  Below is John’s photo of not only an interesting patterned hayfield but an interestingly patterned cloud cover as well. 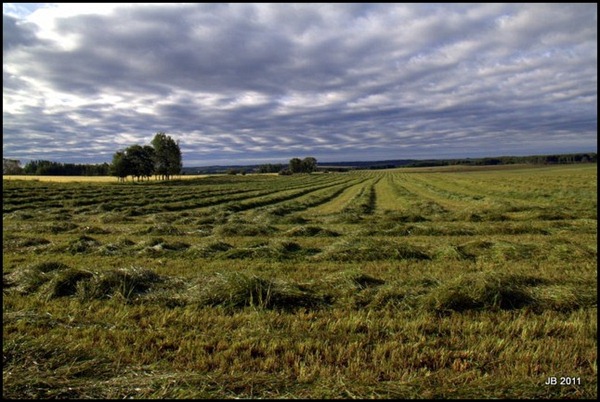 Whether John knew it or not, he had three options with this photo.  Option 1:  Include more sky than foreground.  Option 2:  Include more foreground than sky.  In this case either option would have worked.  Fortunately he didn't choose option 3 which would have included equal parts of foreground and sky by putting his horizon line dead center.

Had it been a clear blue sky I would have concentrated on the foreground by putting just a small blue swatch of skyline across the top.  Had there been big white puffy clouds in a deep blue sky I might have concentrated my center of attention on the sky putting a smaller swatch of hayfield foreground across the bottom.   Because John had both an interesting landscape and an interesting cloud cover he included both giving the landscape a slight preference.  Notice the great patterns in the clouds as well as the great patterns of hay rows in the foreground.  Also notice how a few well placed trees have broken up the horizon line.

You will also notice in John's photo, there are no harsh contrasting shadows and that is because the light is slightly diffused by cloud cover giving his overall photo more of a pastel look than harsh extremes.  And, there is just enough soft shadowing in the hay rows not to give the photo a totally flat looking appearance.  You can make out reasonable detail all the way from the foreground to the horizon line.  Ya did good Pardner…..

Many of the photos I take are done in the worst possible lighting conditions which is roughly between mid morning and mid afternoon so I always look for some kind of clouds to diffuse the harsh bright overhead Sun.  If I am faced with a big blue sky I generally eliminate two thirds of that big blue nothing right off the bat when composing a picture.  Often, I will crop out a lot of sky later when I get the photo into my Picasa Photo Editing program.  I see a lot of people’s good photos that could be made so much better if they would just take a minute to ‘re-photograph’ their shot using a photo editing program.

A reader asked awhile ago how many shots I take of a subject.  My answer to that is mainly just one but sometimes I might take 3 or 4.  It’s an old habit from my 35mm days when every shot was swallowed up by developing and printing costs.  Nowadays you can blast away at something with as many shots as you like because those cost factors are gone now.  If I was a paid professional I would approach photography differently than I do now and cover my bases with numerous shots of a subject using different angles, techniques, lenses, lighting, camera settings etc.  But, that’s not where I am at so if a photo opportunity presents itself along the way I shoot it once maybe twice and keep on moving.  I see no logical reason to take a couple dozen shots of something just to put a picture in my blog.  I do not possess that ‘perfection factor’ that is necessary to make it as a Pro.  Once again, all these opinions are mine alone and in no way suggest I know the first thing about what I am talking about:))

THE LAST PARAGRAPH:  We sometimes hear about people receiving and not being able to take criticism whether it be the creative kind or other.  Often as not we hear very little about the people and their motives for dishing out criticism.  There is criticism, if asked for and done in a mature sensitive way, can be a welcome help to anyone.  But, there is the other form of criticism which is intended to purposely hurt and demean someone.  I have always felt the more serious psychological problem lies with the giver of intended hurtful criticism rather than the feelings of the person receiving the malicious criticism.  And yes, I have been on both ends of these two types of criticism………………..

The only thing better than right now will someday be the memories of right now...AL.
Posted by Al Bossence at 8/20/2011