IT'S A TOUGH DAY WHEN A MAN HAS TO ASK FOR DIRECTIONS 6 TIMES IN HALF AN HOUR!! 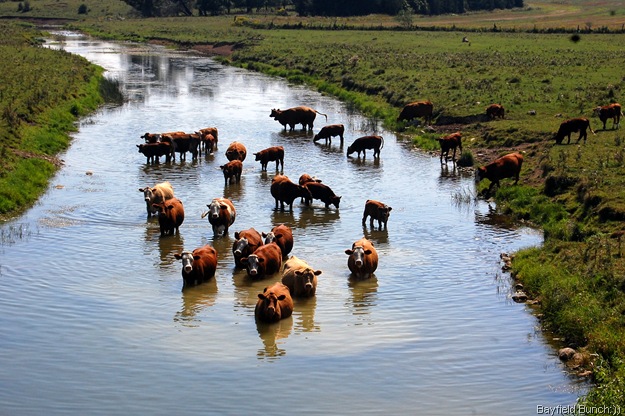 THE GIRLS ARE COOLING OFF FROM THE SUMMER'S HEAT

Wow, 62F at 8 a.m. this morning & after all this heat & humidity can you imagine just how really great that felt.  Come on Autumn:))  With the cooler air it didn't take me long to get my 12 foot aluminum step ladder out & finally trim some more overgrown Mulberry trees.

The Ritz Villa Care Facility where my Uncle Harry lives phoned us Wednesday morning saying they had arranged a Cat Scan & additional X-Rays for Harry Thursday (today) & wondered if we could be at the Stratford Ontario Hospital to meet the mobility van with Harry aboard.  Kelly had to work so I headed myself for Stratford about 10:45 a.m.  What a beautiful morning for a country drive it was.  Big white puffy clouds in a deep blue sky.

No problem finding my way to the Stratford Hospital about an hour east of Bayfield.  I have lived in this whole area most of my life & know it like the back of my hand.  However, what I had failed to remember is the fact the Stratford Hospital had undergone a major renovation & reconstruction project this past couple of years.  Imagine my surprise when I turned down the street beside the Hospital heading for the usual parking lot only to find the parking lot gone & replaced by a big brand new Hospital Emergency Wing.  Oh Oh, I knew I was in trouble.

The main entrance & large lobby I was familiar with & where I had planned to meet Harry was totally fenced off, inaccessible & partially hidden by large piles of dirt.  I did spot a small parking lot near the Emergency wing so cranked myself a turn around & beetled back & into that parking lot.  Now what!!  Figured I would try to make my way around the Emerge wing & head for the lobby.  Nope, fenced off.  Ok, back through the Emerge doors...now where?  Saw a lady standing by the doors so asked her how to get to the main lobby.  She was from out of town & in broken English told me she had no idea what a lobby was. 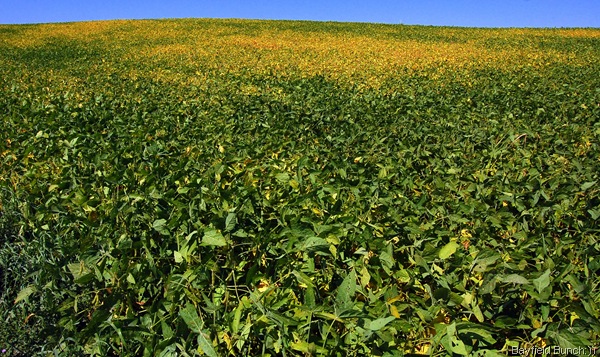 FIELD OF BEANS......PLANT THEM & THEY WILL GROW

I could feel a few pangs of panic setting in as I glanced at my watch knowing I now had absolutely no idea where to meet the soon to be arriving mobility van.  Quickly buttonholed a passing nurse who was obviously on her way back to Emerge from a sandwich machine somewhere.  Her interest was obviously focused on her Tuna salad sandwich as she quickly threw me some un-detailed set of directions involving what seemed like a dozen or two left & right turns.  Never heard or remembered a thing other than her pointing down a long hallway telling me to turn right at the far end.   Oh, & she said something about steps.

Last time I had been at this particular GPS location on the Planet it had been a simple parking lot.  Now I found myself making my way through a tunnel like maze of hallways with never ending doors on either side.  Everything was very new & confusing.  Finally rounded a corner & recognized some plaques on a wall which I knew was near the lobby where I also knew volunteer Hospital people had an information kiosk.  But, the lobby was gone!! 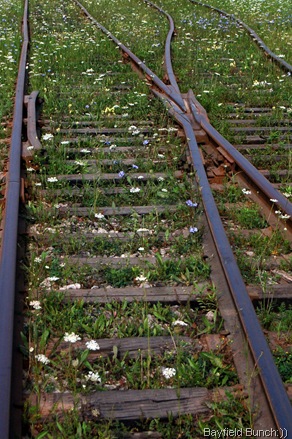 Where the lobby had been was a floor to ceiling construction divider making for another long narrow hallway ahead.  Luckily I spotted a couple ladies with their volunteer vests on sitting at a desk near a pop machine in an alcove.   I pulled over for my third set of directions in about 5 minutes.  This isn't easy for a man you know.

Luckily, they told me I was about half way to where I had to go & it sounded like one more left turn would do it, & it did.  I found the old Emergency section of the hallway & a sign confirmed this is where I would indeed meet Uncle Harry in the mobility van.

Ten minutes later I was helping Harry & his wheelchair from the van.  Lady driver told me to call her on her company Blackberry when we were ready to be picked up.  Told her I didn't have a cell phone so she gave me her own personal phone.  She might as well have given me the schematics for the International Space Station.

Harry was quiet as I quickly wheeled him back in the direction of the volunteer workers because I had forgot to ask them where the new Cat Scan & X-Ray departments were located.  It was now my fourth time asking for directions in less than half an hour.  Oh dear, what is a man to do!!  Following more left & right turning instructions Harry & I were finally back into the new section of the Hospital I had originally entered.  We were looking for the newly named 'Imaging' department & finally found it at the bottom of a wide left sweeping wheelchair ramp.  We checked in & registered at the Imaging desk & all was OK for a time.  Took a few pics of Harry in the new & brightly lit waiting area.  It was a welcome 20 minute rest before.....we got lost all over again!! 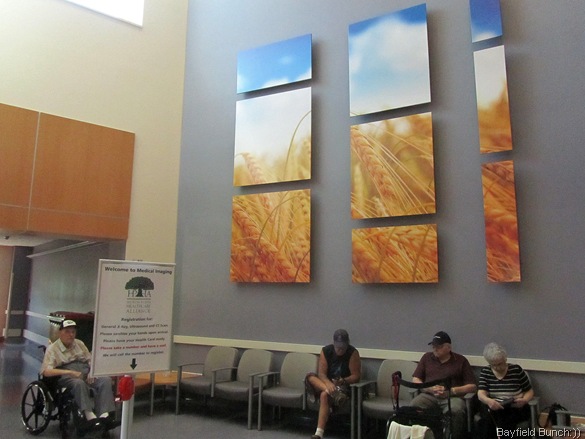 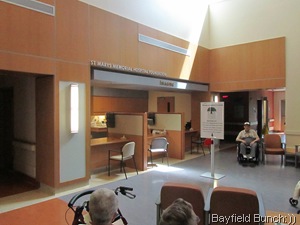 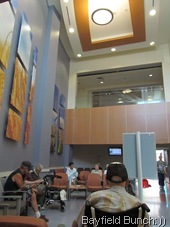 A Cat Scan technician called our number & I wheeled Harry down a hallway, around some corners I think & into a large room with something that looked akin to a space pod or something.  It was the Cat Scan machine kinda looking like a big round Krispy Kreme donut with a hole in the center.  The lady technician & I had a hard time getting Harry out of his wheelchair & onto a bed like narrow bench affair.  It caused Harry considerable pain to his lower back.

I  then waited in a comfy chair just outside the Cat Scan door & 20 minutes later he was done.  With difficulty we got him back into his wheelchair & the lady technician led us on what seemed like another dozen or so left & right turns to the X-Ray department.  It was probably only a couple turns but by now every step forward seemed like another left hand turn.  Harry was still in pain as we waited a short 10 minutes before he was wheeled away into the X-Ray department for more X-Rays.  Twenty minutes later a technician wheeled him back out saying he was finished & we were free to go.  Go where!! Yep, we were lost again as I wheeled Harry down a hallway heading for what I thought was a closed door leading back to the imaging lobby.  Nope, that seemed to be a maintenance room.  Back up the hall, a left turn here, a right turn there & nope, we were getting nowhere fast.  Another large double door with some Nurses on the other side.  Ho hum, here comes my fifth set of directions.  I really do think those two Nurses actually enjoyed a couple older guys needing & asking for directions!!  Followed them precisely & ended up at the other end of yet again, another hall.

Saw an open office door to my left so asked the lady inside if we were anywhere close to the lobby.  Yes, she said, just around the corner to your right.  Oh, how many times had I heard that today.  But, this time it was correct & that turned out to be my final set of directions for the day as seconds later Harry & I finally burst out into the brightly lit Imaging lobby.  We were on our way now retracing our steps to the far side of the Hospital.  But, remember that cell phone the mobility van driver had given me?  Oh ya, here we go!!

Just outside the Imaging Lobby Harry & pulled over to the side of the road so to speak while I sat down on a marble divider of sorts & pulled out the lady driver's cell phone.  Noticed it said Nokia on it.  It might just as well have said 'Frazzleblats!!'  Flipped it open & sat there staring at it.  Now what am I supposed to do!!  Ya, the numbered key pad was there alright but so what.  I did have the driver's Blackberry number written down but what good was that if I couldn't figure out the phone.  Punched in the number & started pressing some unlabeled buttons trying to find 'Send'.  Nothing!!  Re-dialed again & pressed some more colored buttons.  Nothing!!  Ok, that was it for that.

Luckily my short term memory had remembered seeing two pay phones side by each on a wall somewhere on our original journey through this labyrinth of halls.  Harry was still in pain from being moved in & out of his wheel chair a couple times earlier but we made our way back to where I found the pay phones.  Oh geezzz, am I going to remember how these antiques worked & do I have any change.  Been decades since I used a pay phone.  Sign said 50 cents & everything came back to me as I dropped two luckily found quarters in my pocket into the slot & dialed the number.  Darned if the mobility van lady didn't answer too.   Well, how's that for some good old modern antiqueology:))

Ten minutes later I was helping load Harry back into the mobility van for his journey back to the Care facility in Mitchell.  Oh, did I mention about losing Harry's Blue Jay's ball cap in one of the imaging rooms.  Ok, never mind, but I did find it in time & at great perilous risk to myself of becoming lost again in the maze.  No matter, Harry was able to travel under his favorite Blue Jays cap all the way back to his Care Facility in Mitchell. HARRY IS ALL LOADED UP & HEADING BACK TO HIS CARE FACILITY

And, how was your day?

THE LAST PARAGRAPH:  With all the nursing homes, hospitals & medical clinics I have been in & out of these past number of years & seeing the terrible ravages of age on people, I have often thought to myself,  'I sure hope I don't live long enough to get old.'

GROANER'S CORNER:((  Did you know that marriage is a relationship in which one person is always right, and the other is a husband.