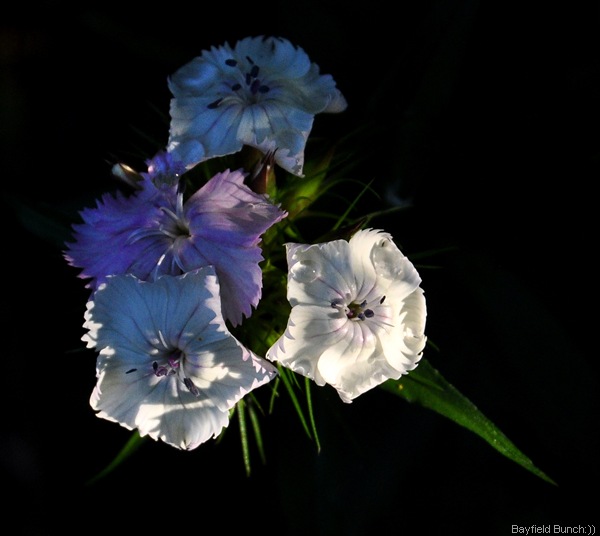 It’s June 25th folks & that can only mean one thing. We are halfway to Christmas.  Two thirds of our day ended up being dull, rainy & on the cold side so for me that means once again having to shuffle back through the fading archives of my memory to come with a blog topic for tonight.   Believe me, I would much sooner be posting new & exciting RV travels.
It has been two 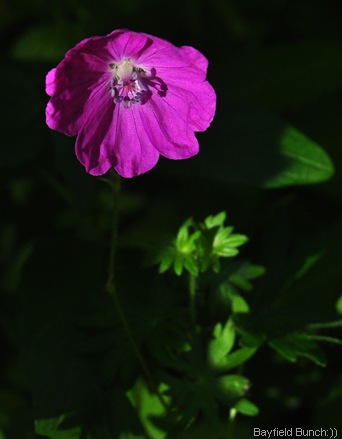 months now since Max & Checkers died & I still cannot bring myself to write about them without an overwhelming heavy sadness coming over me.  I have been able to post a few photos now & then but when it comes to writing about the guys, I just can't bring myself to do that yet.  There are still too many tears.

Thanks to everyone for the suggestions on how to deal with the cat coming into our yard.  All humane ideas & I was happy to see that.  Last thing I want to do is harm an animal in any way.  Despite my ongoing battles & frustrations with the black Squirrels I still like the guys & I do leave peanuts for them around on the stumps.  They are fun to watch in the yard & sometimes they come right up on the sunroom window ledge & make faces at the Motormouse sleeping a few inches away on the other side of the glass.  Occasionally the little Mouse catches them making faces & that really drives her bonkers. 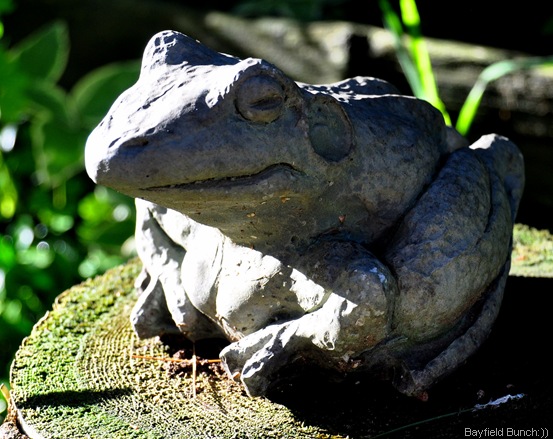 In our sunroom to the right of our computer desk there stands a lamp.  It is not just any lamp nor is it an ordinary lamp.   It is an antique lamp that holds special memories for me.  It is a lamp that had an effect on me from the first time I saw it about 21 years ago & it still has an effect on me today. 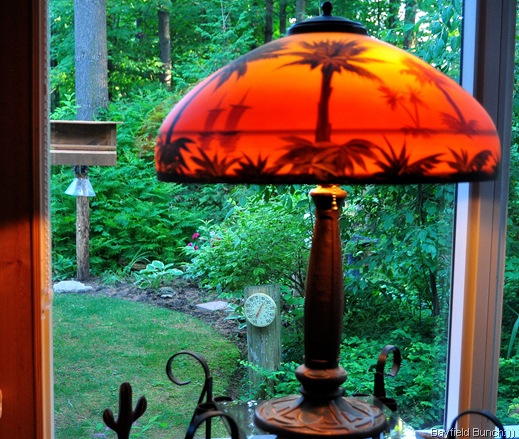 In the town of Tavistock where I grew up lived a gentle soul of a man by the name of Dayton Appel.  Dayton was a kind hearted fellow who never married.  He was a carpenter by trade & lived & cared for his parents until they passed away.  Dayton remained in the house with all the possessions his parents had gathered over the years.  Dayton's Father had been the bank manager in town. 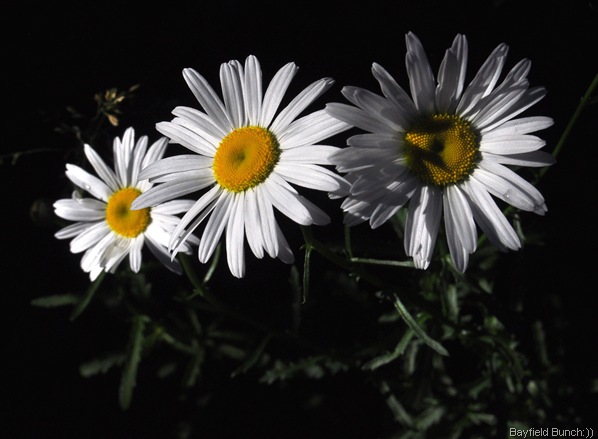 Dayton & my Mother had been childhood friends, attended school together & forever lived in the town they were born.  After my Mother was widowed for the second time an old friendship was renewed & my Mother & Dayton found a comforting companionship with each other.  They liked Big Band music, they liked to dance, they liked evening walks around the town & they enjoyed driving around Sunday nights eating ice cream cones.  They were the best of friends & Dayton was the best of gentlemen. 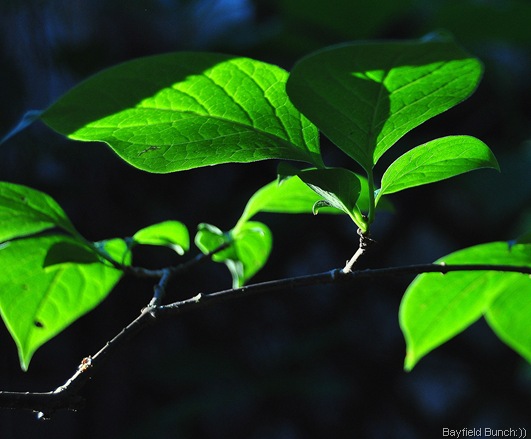 I knew Dayton all my life as well & a finer fellow I have never met.  It was about 1990 when I first had the opportunity to see inside Dayton's house & I was instantly swept back to the 1950's.  He had a piano which both he & my Mother could play & he had all the old records from the Big Band heyday.  Dayton gave me a tour of the old two story house & on the second floor, standing on a table at the end of a hall, my eyes were immediately drawn to a beautiful hand painted glass lamp.  It was the painting on the lamp which so intrigued me.  It was as if it reached out & spoke to me.  Dayton said his Mother & Dad had bought that lamp many years before.  We headed back downstairs & I never saw that lamp again for years, but, I never forgot it. 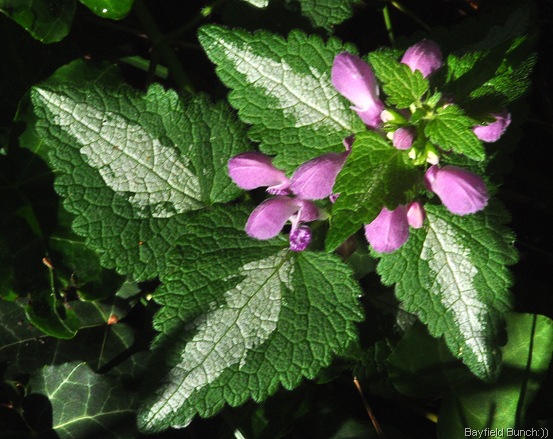 Dayton passed away in May of 2000 from leukemia.  After the funeral I mentioned to my Mother how much I liked & remembered that antique lamp of Daytons in his upstairs hallway.  I told her of the effect it had on me when I first saw it.  She was the only one I told because telling people about a lamp having an effect on me would garner some concerned stares for sure.  I wondered what would become of the 'magical' lamp. 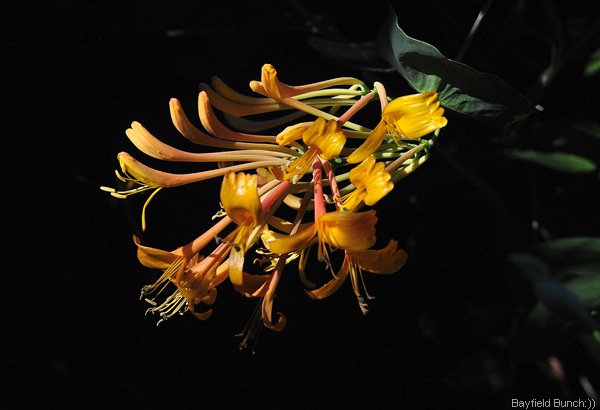 A local auction company later came in & boxed up all Dayton's possessions which were slated to be sold at auction 6 months later in the town of Shakespeare.  Kelly & I lived about 40 minutes away & had not originally planned on attending the auction but at the last minute decided to go.  Upon arriving the first thing I looked for in the large hall filled with Dayton's possessions was....the lamp.  And, there it was, on a table with several other beautiful antique lamps.  But, I only had eyes for the one.

It was sad for me because there were antique dealers there that night & I knew the price of that lamp would be way out of our price range.  There was no way we could ever afford something like that at the time.  My Mother was at the auction as well because I knew there were a few things of Daytons she wished to have. 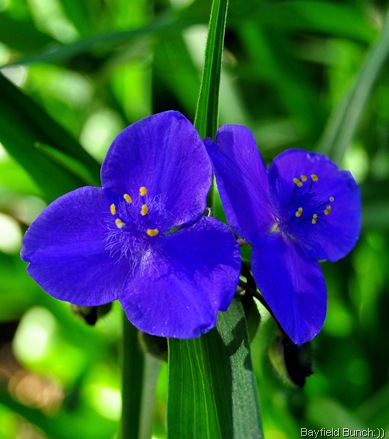 It was probably two thirds of the way through the night when they finally came to the table of antique lamps.  There, far away on the other side of the large arena, near the auctioneer, sat the mystical hand painted lamp.  Bidding started on the lamp ahead of it & the antique dealers immediately pounced driving the price into orbit.  Within minutes the bidding was over & that Tiffany lamp was on it's way to a dealer's antique store.  And then, it was my little orange colored lamp that was hoisted above the crowd onto the auctioneer's podium.  This would be the last time I would ever see the lamp that seemed to speak to me those many years before.  This would be the last time I would see Dayton's lamp. 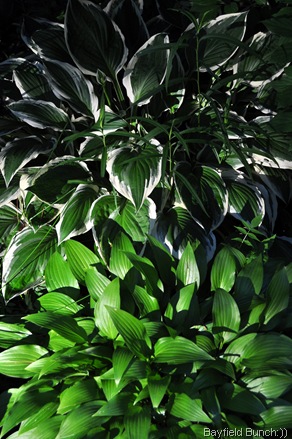 The bidding started furiously & once again the dealers pounced & skyrocketed the price straight up.  And then it happened.  Another voice joined the fray.  It was a familiar voice & it was right beside me.  It was my Mother.  The price went up as the dealers bid.  The price went up & up but my Mother kept outbidding the dealers & this is where things suddenly became very exciting as both my Mother & I were on our feet.  Several times she turned & looked at me as a dealer went even higher.  I nodded to her silently & she quickly raised her hand firing off another determined bid to the wide eyed auctioneer at the far side of the arena. 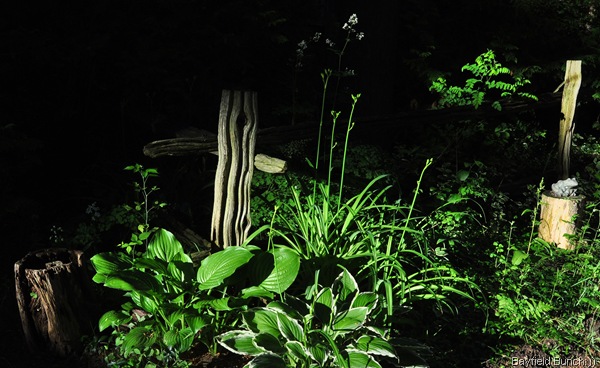 What was happening here was incredible & it was happening so unsuspectingly fast.  It was like a dream sequence as I remember the sounds of the crowd with each bid going higher & higher.  I think it was the first time since I was a small boy that my Mother & I had ever come together in such a happy  spontaneous moment.  And then......I heard the auctioneer shout, 'SOLD!!'  I heard what sounded like a cheer go through the crowd.  I saw the big smile on my Mother's face & she probably saw the big smile on mine.  I was so proud of my Mother that night that she had taken the imitative, stepped up to the plate & went head to head with all the antique dealers....& won:)) 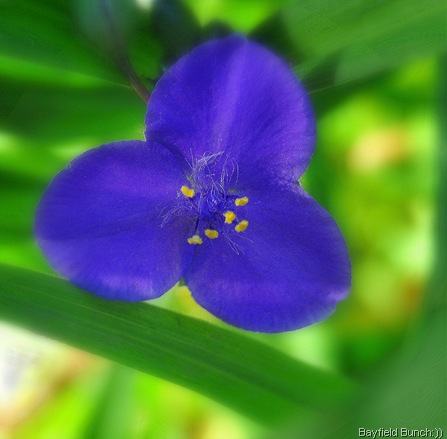 I made my way through the crowd later & picked up the lamp & never let it go for the rest of the night.  They asked if I wanted to put the lamp in a box & I said no.  I just didn't want to let go of it.  After the auction we carefully placed the lamp in the car & took it to my Mothers house in Tavistock where it remained for a short while...........& then vanished!! 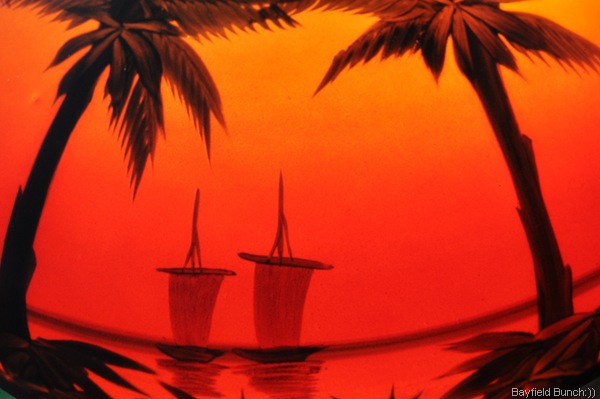 Because I have unintentionally written way beyond what I had planned, I think it only fair to sum this up for tonight.  I'm tired & you are probably tired by now too.  Tomorrow night I will wrap up the story of 'the lamp.'  It's disappearance does get a bit complicated, it does involve a cast of characters, a con man, a mystery, deteriorating health & a lot of money.  Add to that.....a lot of anger & frustration!!  See you tomorrow night:)) 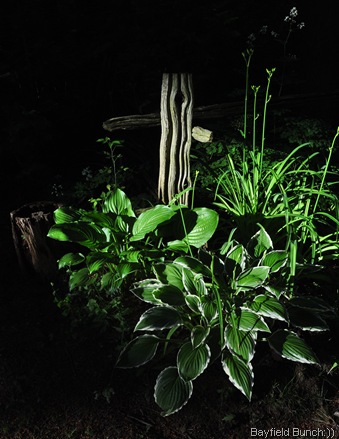 GROANER'S CORNER A man and woman are standing at the altar, about to be married, when the bride-to-be looks at her prospective groom and sees that he has a set of golf clubs with him. "What on earth are you doing with those golf clubs in church?" she whispers. "Well," he says, "this isn't going to take all afternoon, is it?"