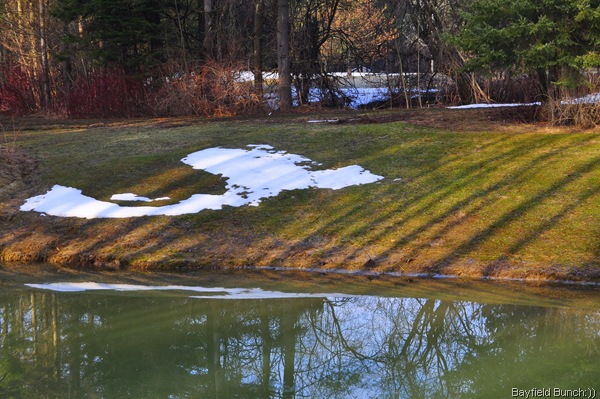 SO HAPPY TO SEE THAT WHITE STUFF GETTING OUT OF TOWN!!

My spirits were so lifted this morning when I caught the first glimpse of morning sunshine filtering through the pine trees.  Whenever we return from our winters in the southwest I always seem to go through a post trip blues state with this year being a rather bit too bluesy.  I think it was all the snow & cold rainy days plus road lag from our hurried trip home.   If we even remotely think of, or I write something about coming home before April 15th next year I want someone out there to seek us out, hunt us down & come give me a darn good swift kick in the ass!!!!  And yes, I know I used the 'A' word!! 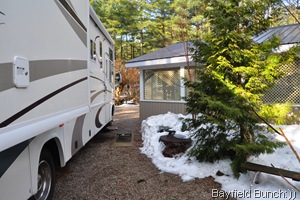 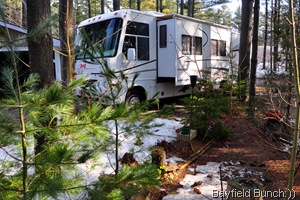 SO NICE TO BE SURROUNDED BY THE COLOR GREEN AGAIN:))
With that ‘butt’ thought in mind I took mine outside this morning & began the big Spring clean up.  Can’t tell you how much that improved my attitude just being out in the fresh air doing something physically productive finally.  Love to get on the end of a lawn rake & a wheelbarrow.  So gratifying to begin making visible progress on the yard mess.  Great to feel the muscles getting a little sore, a little tight & a little tired.  I love dat feeling:))  Still patches of snow on the ground but I was able to work around them.  The snow load off our roof in the back yard is another story & I figure another 2 weeks before that is all melted.  We hit a high around 55F under sunny skies so it ended up a very productive outside day. 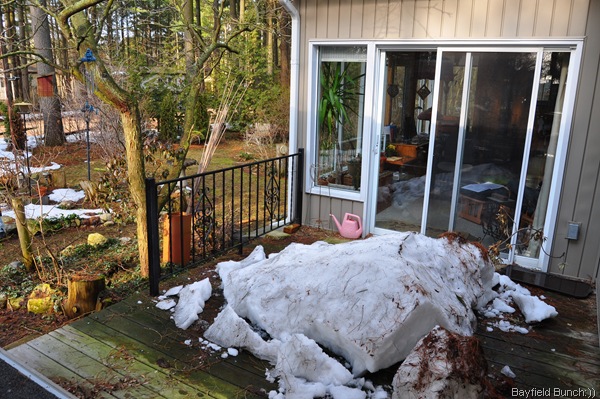 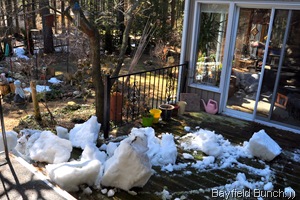 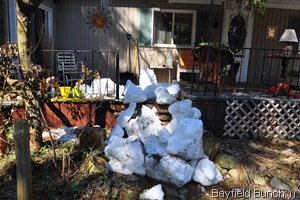 TODAY I WAS ABLE TO FINALLY CHOP IT UP & SHOVE IT OFF THE DECK...A LOT OF WEIGHT THERE
From nostalgia in Seligman Arizona to lunch on the banks of the Colorado River to a lone Rattlesnake getting close.  JOE & NANCY are having themselves a fine time in their new Jeep Wrangler exploring Arizona’s unendingly beautiful landscape.  As Joe says, “Doesn't get any better I don't reckon.”  And in my opinion he is so right:)) 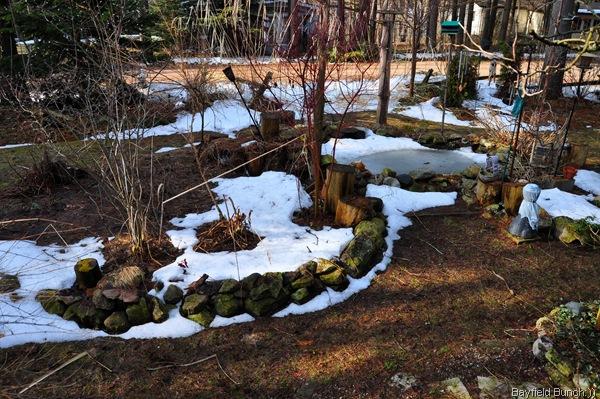 For all you horse people out there, be sure to check out John’s post over at THROUGH GATES OF GRACE about their visit to the Kentucky Horse Park just outside of Lexington, Kentucky. 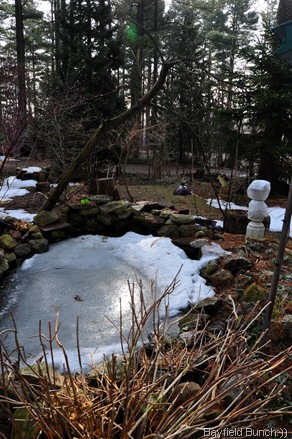 <<< WE CAN STILL SKATE ON THE FROG POND

Two new Followers to welcome today.  Andy Altes has joined us as well as Mary Jo at LIFE IS A DANCE.  Welcome aboard folks:))

And, a few more questions from readers......  A couple people noticed a photo in Wednesday’s blog showing Kelly walking with 5 dogs.  This was taken while we were ranch sitting near McNeal Arizona & the two black dogs on each side of Kelly are the Ranch dogs.  That’s Gleason on the left & Pearce on the right.  Both dogs were named after area ghost towns.  And of course the other three Desperados are our very own Bayfield Bums.  Another reader wonders about boon docking sites near Bayfield.  Unfortunately, boon docking is a relatively unknown word up here in this Canada place.  Best & most abundant boon docking sites are in Arizona & California.  Seems the further east one goes, the less land for free camping.  In our area I know of no place where people can boon dock.  If it isn’t Crown Land up here, it is farm land.  With our boon docking preferences we ourselves would likely find it hard traveling in Canada finding quiet free out of the way places to stay.  I’m sure there probably are some spots but we are not familiar with them.  Ontario & Arizona are two different planets & I will blog about why I think that is shortly. 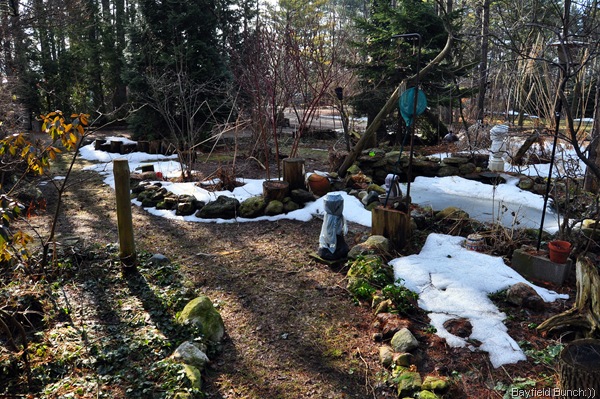 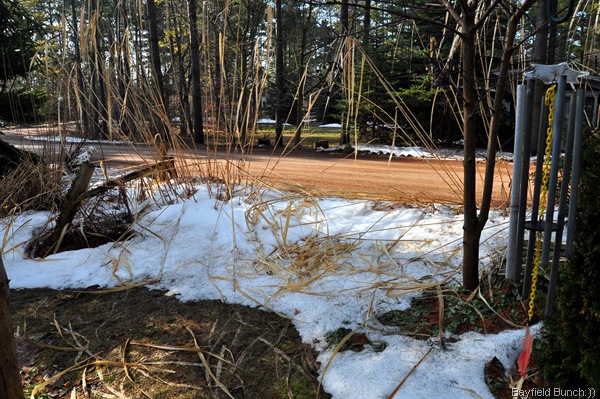 MIGHT JUST GET ALL THE BIRD FEEDERS UP & RUMBLING TOMORROW TOO

Phil wondered about my mention of a Mini Minor in Wednesdays blog.  Did I mean a Morris Minor?  Well, actually both terms are correct…MORRIS MINI MINOR.   I actually had two of them & one had the starter button under the driver’s seat. 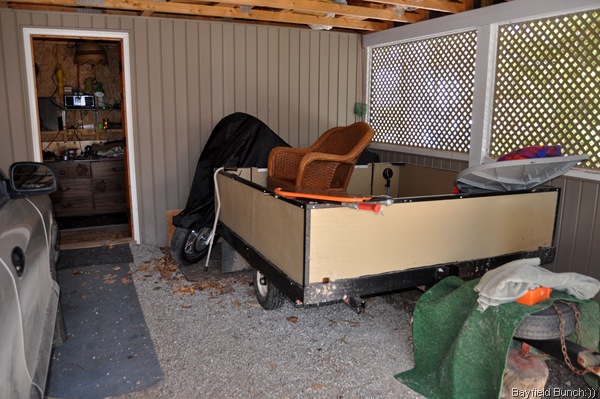 THERE IS A BIG MOTORCYCLE LURKING BACK THERE THAT IS JUST ITCHING TO GET OUT & BURN UP SOME ROADS:))

Russ wondered about the positions of  constellations in the night sky between where we are in Ontario & Arizona.....I find that it is a wee bit disorienting because I am used to seeing star patterns & constellations in specific areas of the night sky here.  Down south, those positions are changed slightly.  In Ontario I am used to seeing the constellation Orion lower in the southern sky but in Arizona, although Orion is still there, he is much higher in the sky.  I cannot see some of the horizon's northern stars & I see one's on the southern horizon that are not familiar.  The night sky is still basically the same but the positioning is off just enough to disorient me some nights when I first look up.  It takes awhile to change the night sky map in my head from northeast to southwest. 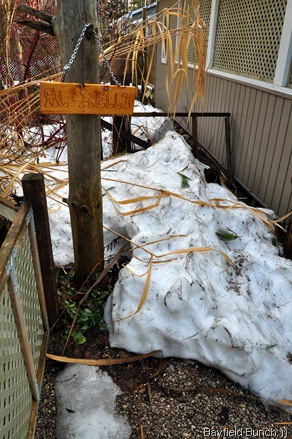 BAMBOO GRASS CAN BE KINDA MESSY IN THE SPRING >>>

I had another question from a reader regarding my thoughts on taking Candid Photos.  I do have some thoughts on that alright & I will answer those questions in tomorrow night's blog.  My brain seems to be running out of oxygen right now thanks to all the super great outside yard work exercise I got today.  I love dat stuff:)) 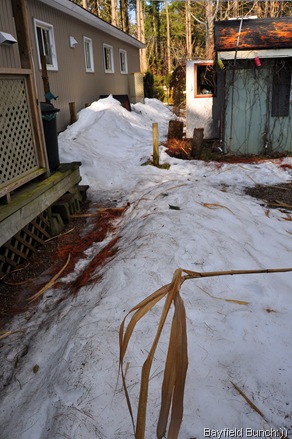 <<< GONNA BE A COUPLE MORE WEEKS BEFORE ALL THIS ICE & SNOW MELTS ON THE SHADED NORTH SIDE OF THE HOUSE
About the 14 new tires….4 went on our Santa Fe last summer & 4 went on our Jeep in October.  2 also went on the front of our Motorhome in October & 4 just went on the back of our Motor Home in Kingman, Arizona a couple weeks ago.  The old one’s were just looking soooooo bad & we were both soooooo uncomfortable with that!! 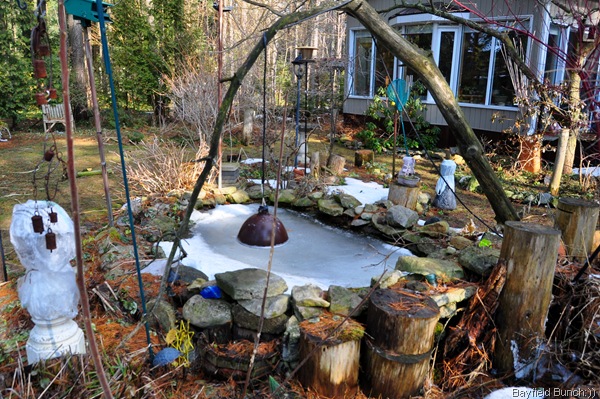 LOOKS LIKE THE HEAVY SNOW LOAD THIS YEAR HAS BENT OVER MY DEAD TREE LIGHT POLE HANGER....YEP, GOT A LOT OF STUFF TO FIX THIS SPRING

GROANER’S CORNER:((
After every flight, Qantas pilots fill out a form, called a "gripe sheet," which tells mechanics about problems with the aircraft. The mechanics correct the problems, document their repairs on the form, and then pilots review the gripe sheets before the next flight.

Never let it be said that ground crews lack a sense of humor. Here are some actual maintenance complaints submitted by Qantas' pilots (marked with a (P); and the solutions recorded (marked with an S) by maintenance engineers. By the way, Qantas is the only major airline that has never had an accident.

S: Auto-land not installed on this aircraft.

P: Something loose in cockpit.

S: Something tightened in cockpit.

S: That's what they're for.

S: Aircraft warned to straighten up, fly right, and be serious.

P: Noise coming from under instrument panel, sounds like a midget pounding on something with a hammer.

S: Took hammer away from midget.


The only thing better than right now will someday be the memories of right now...... AL.