AND I THOUGHT WE HAD A TRANSMISSION PROBLEM!! 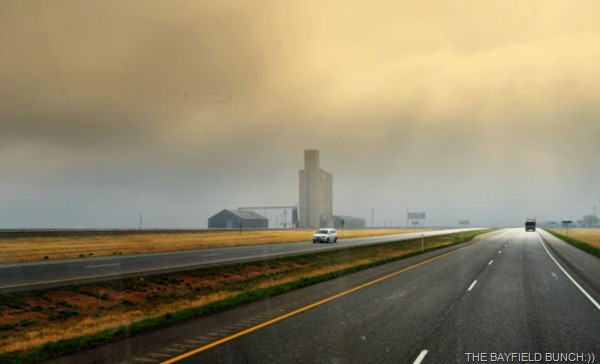 We woke up to the crowing sounds of a Rooster this morning.  Now how nice is that:))  And how nice it is to have it light until 8 p.m. at night now too.  Many early signs of Spring as we rolled through the rural countryside today too. 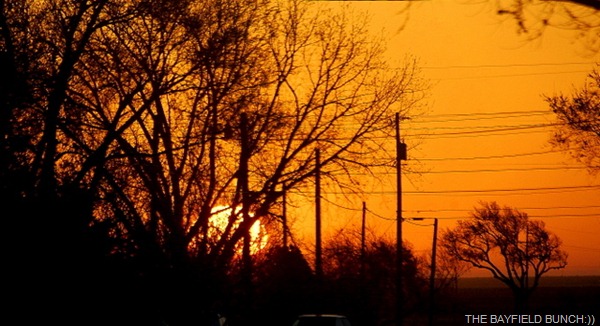 SUNRISE ON OUR STREET THIS MORNING

A few words about Vega City Park in case there are some Boon Dockers motoring through on I-40.  .  This was one of our nicer stops even if it was on a street.  The fenced Park is well cared for, clean & neat.  Tennis Courts, jogging track, horseshoes, badminton & a complete children’s playground with washroom.  Book says one can park anywhere they like around the outside of the Park.  We parked at the northwest corner by the gate.  Beware the low hanging tree branches.  Another good spot is the south side along the fence by the tennis courts.  Verizon signal was good as well as Skype.  Also received about 5 clear TV channels with the rig’s antennae. A COUPLE OF TIRED LITTLE TRAVELERS

After a fuel fill up in sleepy little Vega we were back on I-40 heading east about 8:10.  For the longest time I thought we had some kind of transmission problem because the rig wouldn’t shift into high gear.  I felt we were ascending a long grade into Amarillo but it still should have shifted.  We seemed to be running a thousand RPM’s to high.  Tac should have been reading about 2200 & it was reading 3200.  Stopped to check tranny fluid & it was fine.  Just could not figure out why it was not shifting.  And then…………with the flick of a switch the problem was instantly solved. 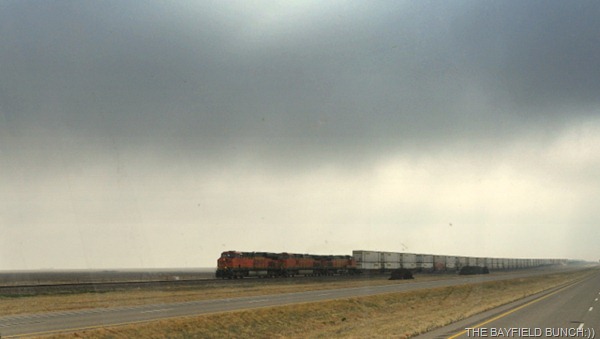 THEY SURE BUILD LONG TRAINS OUT HERE IN THE MIDWEST

When we had stopped for the day on Friday, one corner of my suction cup visor had pulled free.  In order to re-stick it to the windshield I straddled the steering wheel with knees resting against the dash.  My right knee had pressed the ‘Overdrive’ button into the ‘ON’ position.  As soon as I turned that switch off this morning the revs dropped to their normal running range.  And with that, all the gloomy transmission repair dollars floating around in my head flew right out the window:))  Ya Ya I know, I can just see all the mechanic guys just shaking their heads.

We had been driving in beautiful morning sunshine until we hit Amarillo.  Ahead of us, just like a wall, lay a cloud bank.  It was like we drove up into the clouds complete with a big drop in temperature.  Shades of the Twilight Zone.  Twenty miles east of Amarillo we were back into full sunshine & warmer temps again heading for……..Oklahoma City?  Nope, Wichita Falls.  Just before Amarillo we decided on the southeastern route along highway 287.  This proved to be a good decision because the highway is a nice 4 lane road.  We were just needing an Interstate rest & 287 gave us that.  Lite traffic, green farm fields stretching to the horizon, quaint towns & great signs of Spring along the way. 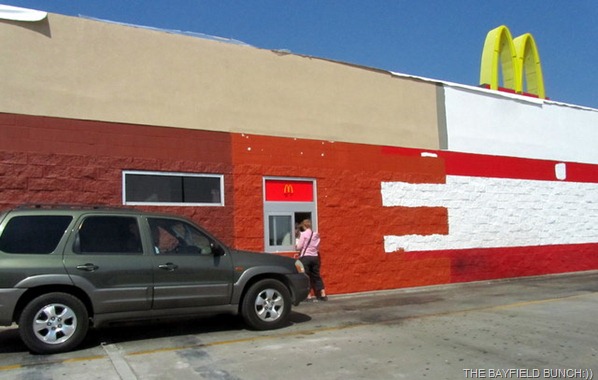 THIS McDONALD’S IN CHILDRESS WAS UNDER RENOVATIONS WITH ONLY THE DRIVE-THRU OPEN….BUT, DID THAT STOP KELLY??  NOSIREE…………..

Missed a turn off ramp in Wichita Falls & briefly ended up in the Soupburbs again. But, within minutes we had ourselves straightened out & back on track for the little town of Henrietta on highway 82.  Our book told us of a city park there called Hapgoods so that is where this blog is coming from tonight.  We are within site of the highway but all is quiet.  This is actually a real RV campground with water, electricity & sewer.  We are fine so never bothered with any of the facilities.  Twelve spots here with 3 rigs & us.  The other rigs kinda look permanent.  Not as nice a location as Vega but it will do just fine for an overnighter.  Five clear TV channels, green grass, a tree & a good Verizon connection.  No destination tomorrow except to say we will join up with our old tried & true southwest route at a little place called St. Jo just west of Gainesville Texas.  As challenging & exciting new routes are, there is always something comforting about the familiarity & security of old routes……………10-4:))

OUR OVERNIGHT SPOT IN SOUTHEAST HENRIETTA TEXAS…COMPLETE WITH GREEN GRASS & A TREE:))

We have gone through two time zones in the past 3 days & that is working in my favor as far as sleeping goes.  It has been as if my Ontario body clock never did make the transition to Pacific time all the while we were in the West.  Kelly was even up before me this morning & that is extremely rare. 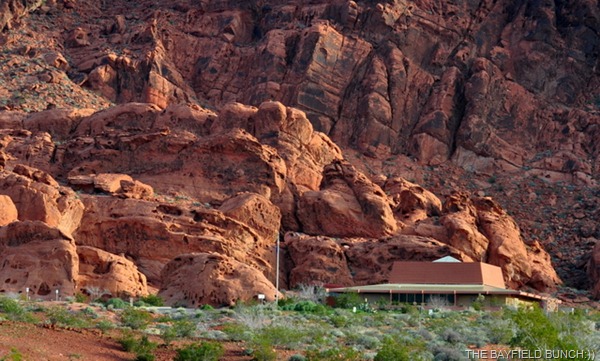 VALLEY OF FIRE VISITOR’S CENTER BLENDS RIGHT INTO THE ROCKS

And now, once again let me clear something up.  Geeeezzzz!!  The book I mentioned in last night’s blog is the ESCAPEE CLUB’S  book called, Days End.  You have to be a member of the Escapee’s Club to receive this book.  I have mentioned probably half a dozen times in past posts that Kelly & were once members of the Escapee Club when we first became interested in the RV lifestyle years ago.  We also joined the Canadian EXPLORER RV CLUB around the same time.  We let both those membership’s lapse but our very outdated Days End book dates back to that time & still serves us well.  I happen to think the Escapee’s Club is an excellent outfit with many benefits.  We just happened to let the membership slip & just haven’t got around to renewing it again.  Now, I hope that calms the troubled waters……..again.  Double Geeeezzzz!!!! 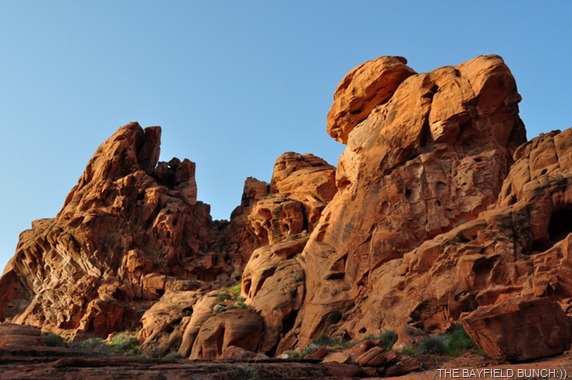 GROANER’S CORNER:((    What do you have when a lawyer is buried up to his neck in sand?