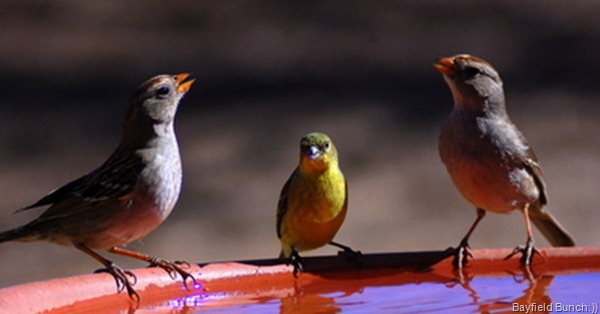 WISHED YOU GUYS WOULD KNOCK OFF THAT WARBLING!!

It was a busy morning as we bustled about the rig readying ourselves to get the big wheels rolling.  I had been concerned about our problematic rear passenger side hydraulic Jack.  Would it retract?  It did:))  Only glitch we had was when the living room slide would not come in.  A bit of finagling in the fuse panel seemed to do the trick & the slide finally powered up & came in. 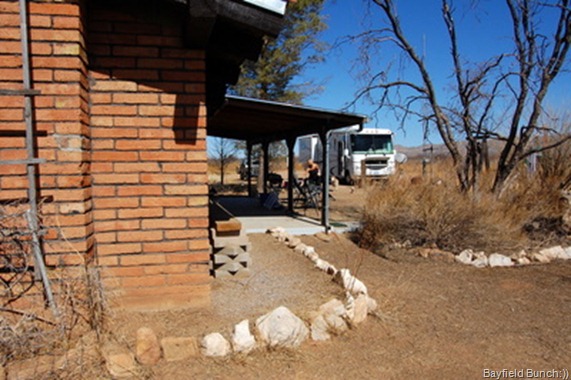 OUR NEW BUT TEMPORARY DIGS

It was exactly high noon when we rolled out the laneway & through the gate on our journey to our next destination.  Weather was good, rig ran well & the traffic was light as we finally reached our next destination a half mile away & 2 minutes later. 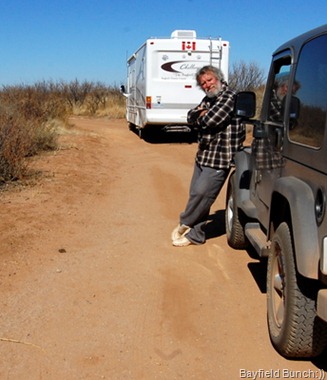 ROLLING OUT THE LANE THIS MORNING >>>

From here on in I am going to refer to Glen’s house where we are now as the Flying W Ranch.  That is the name carved into the wood fireplace mantle by the man who built this house in 1977.  His name was Richard Wiegand & he was Ingrid’s Brother. 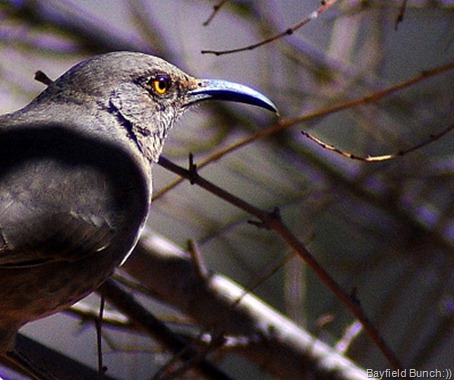 Didn’t take us long to have the chairs set out, the satellite dish set up, BBQ in place & Mexican tapestries hung.  Sure felt like home.  And we could tell the doggy guys liked it too.  Tired from our big move we just basked in the sun & watched the multitudes of birds around the feeders.  Even some Gambles Quail came in very close.  From the time Richard Wiegand began building this house nearly 35 years ago he made it a priority to look after the many birds in the area.  And, all those birds descendants are still here in the front yard with a steady whirr of little wings & a continuous chorus of bird songs.  How wonderful it is to be in the constant surrounding presence of nature. 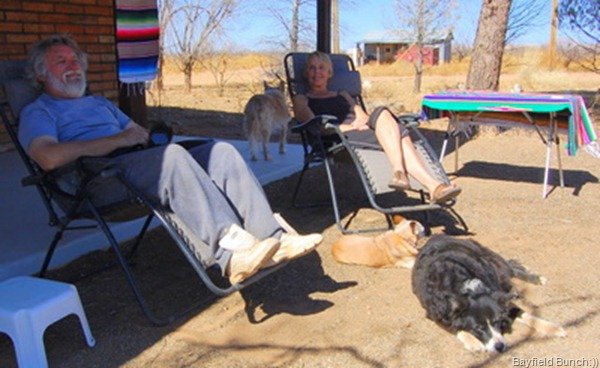 MA & PA KETTLE DOWN ON THE FARM

Jeanie phoned to say they were on their way with Jim & Rene to the property we had just vacated so we slipped on over & awaited their arrival.  Wasn’t long & the little green Jeep led the following truck & fifth wheel through the gate & onto the property.  Last time we saw Jim & Rene & their big dog Wyatt was Borrego Springs CA when we were both boon docking at the Clark Dry Lake Bed.  Nice to see them again.  Some of you may remember Jim & Rene & their previous 3 legged dog Jerry when they appeared on the Nature Channel with their touching story about Jerry’s cancer.  JERRY'S STORY. 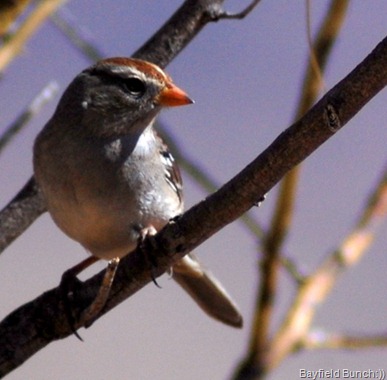 We all did a walk around of the property & house then Jeanie & Ray came over to the Flying W for a look around.  They had never been here before but knew Ingrid’s Brother Richard.  Jeanie was able to give us a little history on the house & property.  Both Jeanie & Ray fell in love with this little place just as we did.  It’s not new & it’s not fancy schmancy but we sure do like it.  Fits the dusty old Bayfield Bunch to a tee.  We sure had a lot to talk about today regarding our future.  Nuff said about that for now. 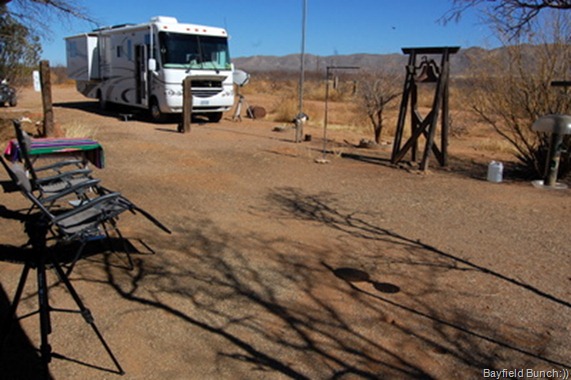 About 6 o’clock tonight I was moving a box off a table on the front cement porch when an electrical cord snagged my D50 Nikon with my new 300mm lens attached & dropped them to the concrete floor.  The lens separated from the camera & I immediately saw broken pieces.  I won’t bother to tell you the feeling I had in my stomach.  The front part of my camera had snapped right off so I knew immediately that was the end of my old faithful Nikon D50.  My main concern was the lens & I feared it was finished too.  After a 3 foot drop onto hard concrete, that kind of equipment generally does not survive.  From all outwards appearance the lens looked undamaged.  Snapped it onto my other Nikon & hit the shutter button.  The lens auto focused OK & when I later downloaded the pics they still looked sharp.  Tomorrow I will run the lens through all it’s functions & keep my fingers crossed.  As for my D50 I figure trying to get it repaired would cost as much as another camera body so I will now begin the hunt for another Nikon DSLR.  Maybe new, maybe used.  I’ll have to start reading reviews & see what I can find.  Anybody out there selling a Nikon body?? 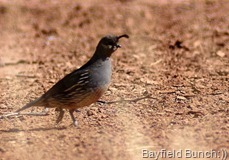 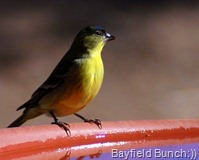 Jeanie & Ray think the donkeys were stolen to be used as pack animals for the drug runners.  It’s a common way of moving heavy drug bundles at night through the Valley & over the Mountains here.  There have been other horse & donkey thefts in the area over the past few months.  But, none of us has given up hope that they will be found………….. 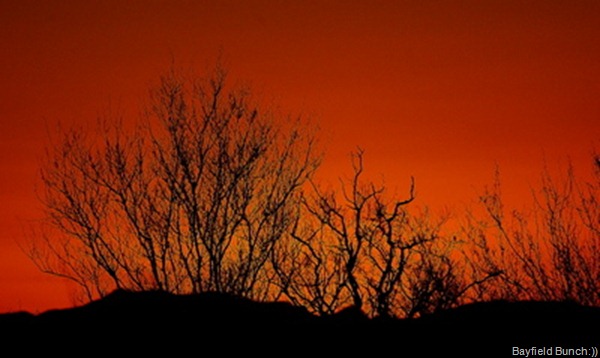 GROANER’S CORNER:((  Did you know Submarines are safer than airplanes. Proof in the fact is there are more airplanes in the water than submarines in the air!  And how do you sink a submarine full of blondes?  A: Just knock on the door of course.