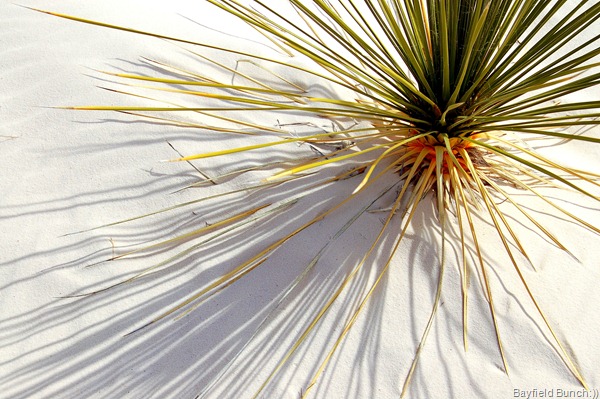 The pain in Kelly’s knee that has been bothering her for a week & a half now eased off about 6 hours after taking the first 800mg Ibuprofen pill.  No pain when she got up this morning either & she thinks the swelling may have gone down a bit.  We will now likely head out first thing Sunday morning (depending on weather)  for Borrego Springs.  Might be over that way early next week depending on wherever the wind blows.  No idea how long we’ll stay there & that may depend on what happens here with this ranch deal.  We have not heard anything from the Real Estate fellow since earlier in the week.  Despite that we may return here sometime in March on our way home & feed the birds.  Because of the California gas prices we will likely not head up around the Death Valley area as I had hoped.  Maybe Joshua Tree SP on our return to the Sulphur Springs Valley. 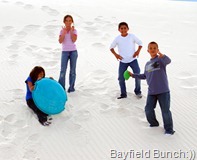 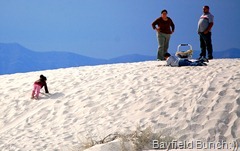 KEEP IN MIND THIS IS SAND THESE KIDS ARE PLAYING ON, NOT SNOW

(YOU CAN ENLARGE THE PICS BY CLICKING ON THEM)

The lifestyle between our home in Ontario & here in Arizona is so totally different that it is like stepping back into the past for us every time we come here.  I sometimes refer to it as having to put our southwest heads back on & look at things with our southwest eyes.  Ontario & Arizona are so different in so many ways.  And, it is that change I find so interesting & invigorating. 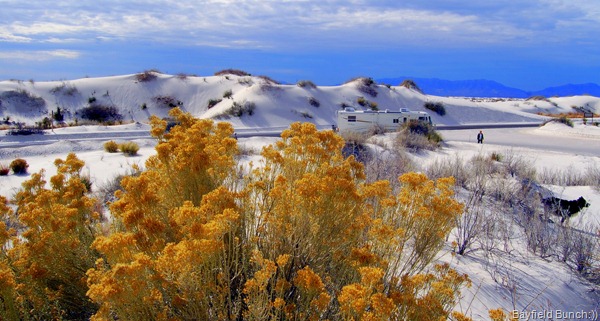 KELLY, CHECKERS & THE RIG ARE ALL IN THIS PICTURE 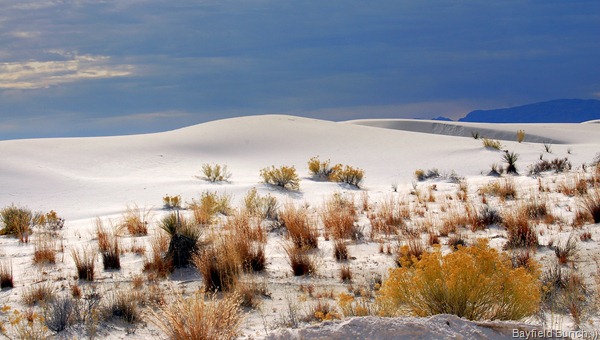 We find people very friendly & laid back in the southwest.  Especially in New Mexico & Arizona.  Not nearly as many rules & regulations here as back home & I like that.  Out here in the small towns & valleys there is still a wild west flavor & a closeness amongst the people.  For anyone who has read the Southwest's history they will know that is how the west has always been.  People could only survive by helping each other in the violent & turbulent times of the 1800’s.  There is a sense of that still present because life can be harsh in these here parts.   I’m not talking about the large towns & big cities,  I’m talking about the dusty little towns & burgs out here in the rustic & quaint wind swept desert backcountry.  Out here where the tires meet the mud, the rocks & the gravel.  Out here where you can see for miles & miles in any one direction & not set your eyes on a single car ahead or behind you.  People don’t look at you funny if your wearing a cowboy hat or have your boots on backwards.  If you want to grow your hair down to your knees that’s just fine because there are lots of good old down to earth characters in the west & I like that.  Doesn’t matter if you got a ripped shirt with an acre of dust in the top pocket or if you have an old beat up Ford truck with a missing fender, a blown headlight & a couple dozen dents in the sun faded paint job.  Half a dozen cracks in the windshield is alright too.  I like the idea a feller can just kinda fade away & become a part of the landscape. 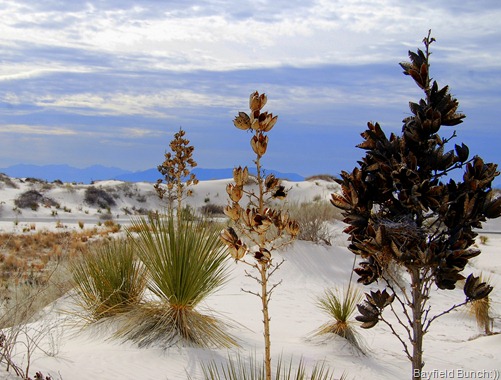 I love this southwest lifestyle, feel totally comfortable here & fit right in like an old gray weather beaten barn board on a tumble down 49’er miner’s shack. 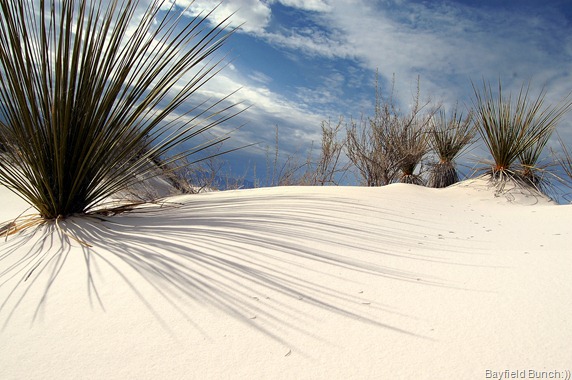 Aside from the scenic advantages of spending the winters in the southwest we have always known how much healthier it is than staying trapped in a house by the ice, snow & harsh freezing temperatures of a northern winter.  I was first hooked on the southwest back in May of 1992 when I made a fairly quick trip to Utah & back.  Kelly & I rocketed to & from Big Bend Texas during a Christmas Holiday break in December of 2004.  We had a Class C at the time & that trip sealed our love for the southwest.  We have returned to New Mexico, Arizona & California every winter since beginning in October of 06. 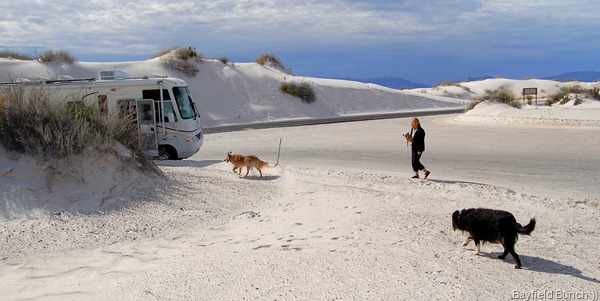 We have friends back home who have never been anywhere south in the winter & have no interest in going south despite being retired & financially stable.  That is a hard one for me to understand.  After having spent well over 60 years enduring all the aspects of full blown Canadian winters I do not want to ever have to do that again.  We have had enough of being trapped indoors day after day by blinding snow storms, freezing rain, closed highways & power outages, etc.  Here in the southwest we can be outside about 99% of the time walking, hiking, day tripping, working on outside hobbies, soaking up warm sunshine & all the time being surrounded by beautiful scenery, sunrises & sunsets.  We are not stay inside television people so the southwest is a natural & healthy place for us to be while we are still able. 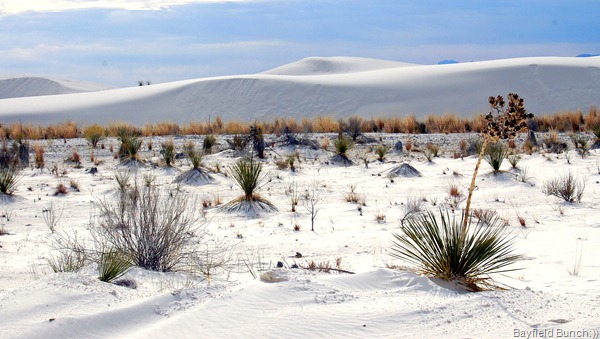 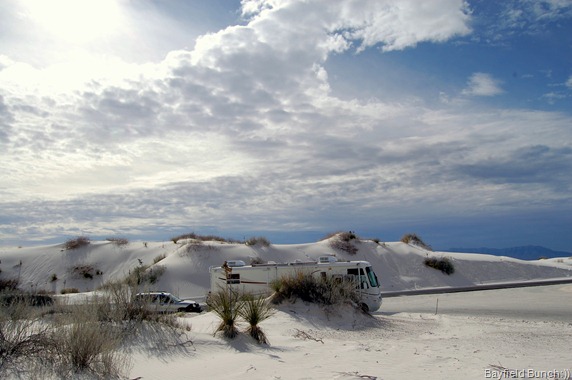 We know this will not last forever but while we are healthy & still have control over our lives & destinations we will not be sitting around on our cans in Canada during the winter!!  The sands of time are just not in our favor anymore……………And, won’t you all be glad when we’re back on the road tomorrow & I will have something refreshingly new to blog about….me too:))

The air was so still this morning it would not have disturbed a candle flame.  However, around 9 a.m. the powerful southwest winds suddenly ripped in from the south scattering dust & tumbleweeds everywhere.  We retreated inside & hung on except for Checkers who really seems to enjoy having the winds tousling through her fur.  She just lays there under the Motor Home with a big smile on her face, fur blowing every which a way.  But, even she had to finally relent & come in.  So windy today a lot of the tiny birds weren’t even flying & as the day progressed we probably endured some of the worst winds we have ever had.  The north & south horizon lines were totally invisible at times because of the large clouds of billowing dust.

RETIRED ROD had a few questions about my Nikon D90.  In our comment section Rod asks, “Tell us more about how it works as compared to the older cameras, and how you lens transitions to the new body. And perhaps where you ordered it.”  I ordered the camera body from ADORAMA The Camera People.  That recommendation came from KEN ROCKWELL'S site which I highly recommend to anyone interested in photography.  He has the best product reviews & will tell you what is good or not about camera models.  He tests all new cameras/lenses & if he thinks a new camera model has a lot of useless tecky razzle dazzle kid’s stuff on it he will tell you so.  He also explains how to tweak your camera for it’s maximum performance.  His site has helped my photography & I’m sure would be helpful to other photographers as well.  Ok, back to Rod’s questions……Fortunately for me the D90 is not on a steep learning curve because the basics are carried forward from my D40 & D50.  Dials, switches, buttons, etc are all mainly in the same places.  Menu operates the same as well.  I was able to pick this camera up, snap on a lens & step out the door & start shooting.  The camera does have a lot of new internal features which will take me awhile to get onto though.  I can be a slow learner at times but thanks to Ken Rockwell’s site on the NIKON D90 I have already made some tweaks in the exposure department.  I like Ken’s photography so have basically set up my D90 the same as his.  Also made sure before buying the D90 that my 2 Nikor zoom lenses were going to be compatible, which they were.  Just snap em on & away ya go.  As I discover new technologies with the D90 I will pass them on but I’m not expecting you will see a big difference in my photos from the D40 but we shall see.  The D90’s potential is definitely there so we’ll see how lucky I can get with it.  The D40 is going to be hard to beat though because it was & still is an ‘Ace’ camera.  Also want to mention here that you can shoot your buns off with the best camera on the market but if you don’t have a good handle on some basic photographic techniques or are not familiar with your camera equipment & are not experienced with a good photo editing program you are probably going to be disappointed in your results.  As you all know, I use Google’s Picasa 3.8 photo editing program & it works just fine for me.  Lots of other expensive photo programs out there that do more but to each his own.  I’m not a smart techy guy so in my world….simpler is better.  Well, that sure took Mr. Blabberfingers long enough to answer a few simple questions didn’t it…………

GROANER’S CORNER:((  The Doctor was puzzled 'I'm very sorry Mr O'Flaherty, but I can't diagnose your trouble.  I think it must be drink.'  'Don't worry about it Dr Cullen, I'll come back when you're sober.', said O' Flaherty.