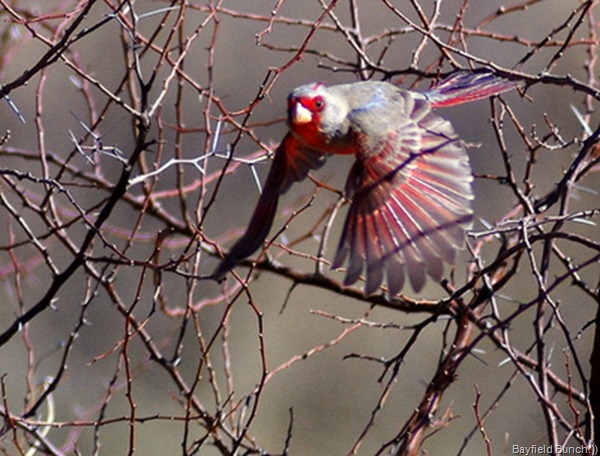 Another one of those up at 2 a.m. capers, so another very long day.  Thursday night did indeed turn out to be even colder than Wednesday night & despite heaters & furnace going, the icy cold just radiated through the thin fiberglass Motor Home walls & kept me awake waiting for the sunrise.  Thermometer said 2 degrees as I sat huddled in a big blanket with the computer on my lap.  Didn’t take me long to get a good grumbling rant going but I mellowed out during the day & ditched the rant. 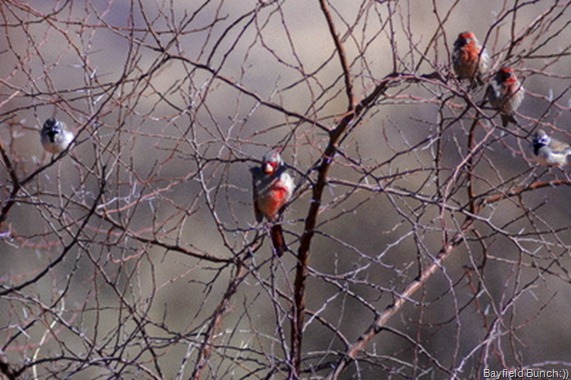 We were frozen solid again this morning with nothing coming out any of the taps.  A quick check of the sticks & brick house told me it was still frozen as well.  Nothing we could do but sit & wait & stew about our situation.  Well, Kelly did the sitting & waiting part while I did the stewing part!!  I’m good at stewing:))  I was totally convinced our water lines were shattered.  How could they not be. 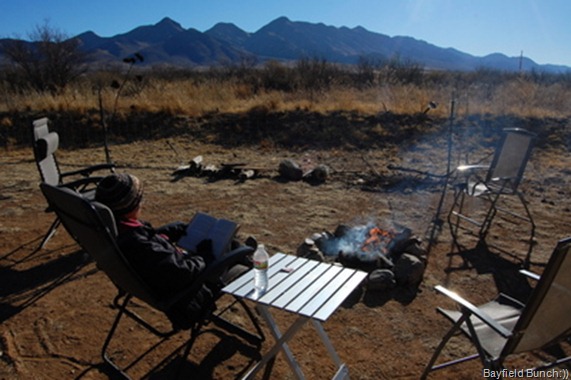 UNDAUNTED, KELLY SITS IN THE MORNING SUN, BOOK IN HAND, COMPLETE WITH WINTER MITTENS & A HAT…DAUNTED, I REMAINED IN THE RIG WITH AN ELECTRIC HEATER STUFFED INSIDE MY SHIRT

The outside thermometer garnered all our attention as it began it’s slow rise towards the freezing point.  I was sitting outside by the campfire soaking up some warming rays when Kelly stuck her head out  the Motor Home about 10 & hollered, ‘the taps are all working.”  Figured this was it, time to put the Scuba suit on & go looking for all the leaks & broken pipes.  Flashlight in hand I went through the under sink cupboards, the water pump compartment, fresh water tank bin, hot water tank & even under the rig looking for the expected drips.  Nothing!!  What, how could that be….but it was.  No leaks that I could see.  How nice to have the water working again.   Hot water especially. 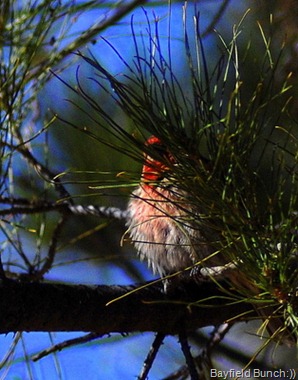 THIS LITTLE FELLOW DISGUISED HIMSELF AS A CHRISTMAS DECORATION  >>>

However, the house water lines were still froze so we just waited it out & about 2:45 this afternoon Kelly pointed out the windshield to a tap about 50 feet away gushing water.  Yaaaaay, water line to the house is finally unthawed so two hot showers coming right up:)))  Oh Oh……..not so fast!! 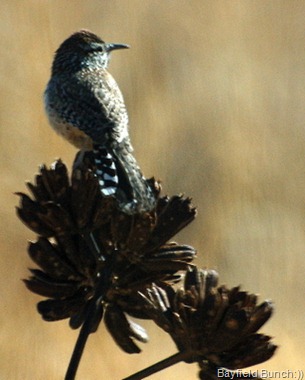 While I was turning the water off at the tap I could hear a noise over in the pump house where the water pump was located.  Figured it was just the pump catching up & filling the lines.  And then I saw water all over the ground surrounding the pump house.  It was looking like a Louisiana swamp over there.  I clumped through the gathering gumbo mud & approached the big noise going on inside the small building.  Slowly opened the door as water came ricocheting off the tin walls.  I could see  where the main waterline from the well heading for the house had burst in several places.  There was a blue main shut of valve but I was leery of trying to close that with so much water pressure in the fractured line just inches away.  I knew there was a pump shut off switch on a pole nearby so ran over to that & shut down the pump.  Returned & closed the blue main shut off valve.  So much for those long awaited showers I thought:(( 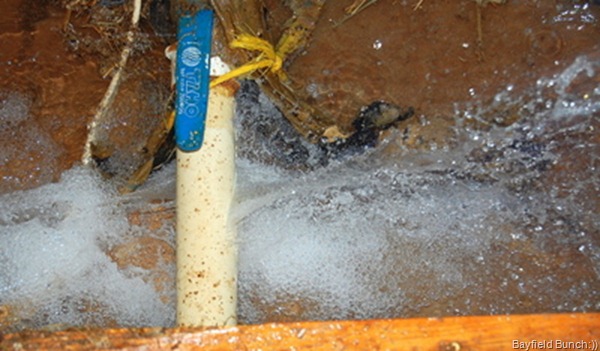 THIS IS THE BROKEN WATER PIPE IN THE PUMP HOUSE

Kelly phoned Ray over at the ranch & he said it sounded like something he could fix & would slip over.  Yaaaay, the showers are on again.  An hour later Ray phoned saying all the PVC pipe in Elfrida was sold out because of bursting pipes all over the area.  He is going to try & get some pipe  Saturday morning .  There went the showers again!!  We can’t go anywhere until we’ve had showers because we would be arrested for environmental pollution!! 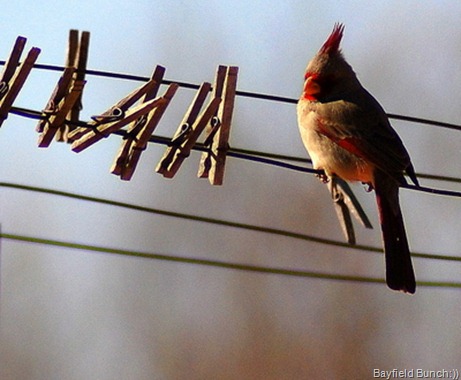 JUST HANGING OUT WITH MY CLOTHESPIN PALS

Apparently Cochise County has been hit hard by this cold spell & many people are still without water & heat due to broken pipes & some kind of problem with folks running out of natural gas.  Despite my grumbling over the past couple of days we sure have got off lucky compared to other people here in the valley.  We have enough water on board to last us until the pump house line is repaired & we have two thirds of a tank of propane.  We have hot water & the weatherman is promising much warmer temperatures starting tomorrow.  Cold tonight again with predictions of 16F but not as bad as the 2F we had this morning.  I’m cautiously optimistic when I say, the worst is over & we are on our way to much warmer temps. 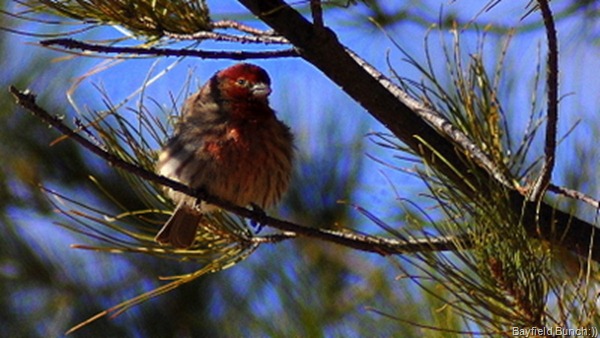 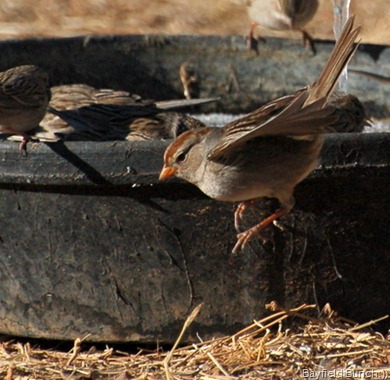 HOPPING DOWN OFF THE WATER BOWL

Noticed ERIK'S RV BLOG has just joined the Bayfield Bunch on their travels.  Welcome aboard Erik & that’s one mighty fine profile picture you got yourself there:))  We have also been joined by THE OLD GEEZER as well on our list of blog supporters.  After a long slow growth period it is nice to see the blog followers list growing again .  Welcome aboard guys:)) 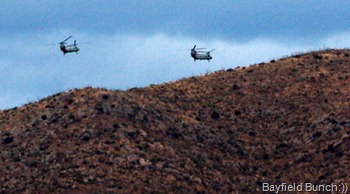 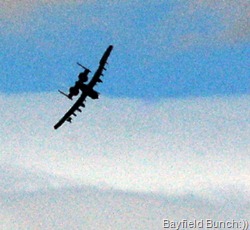 Here’s a bit of blog coincidence… Pidge from THE FRUGAL TRAVELERS had the same ‘Bean’ joke in her blog as I did last night in Groaner’s Corner.  Now, how often does that happen.  To find the face in the beans just look to bottom left or left of center near the bottom:)) 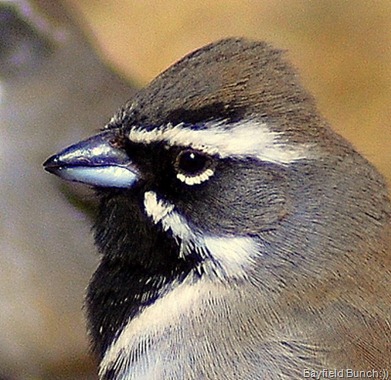 Note to Gerrit up there in that Wingham town of Ontario, Canada  Yes, we are happily using our new Mifi & it’s working flawlessly.  The real test will be if & when we ever get out of this area.  With Mifi we can’t use our Wilson antennae so reception will be the big question but I suspect we will be fine, just as before with our Cradlepoint setup.  Actually, our Mifi is working through our Cradlepoint. 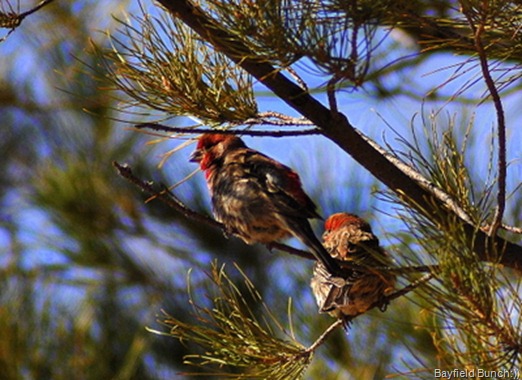 GROANER’S CORNER:((  To get away from their high-stress jobs, a couple decided to spend weekends relaxing in their motor home. But after finding their peace and quiet disturbed by well-meaning, but unwelcome visits from other campers, they devised a plan to assure themselves some privacy. Now, when they set up camp, they place this sign on the door of their RV: "Insurance agent. Ask about our term-life package."

The only thing better than right now will someday be the memories of right now...... AL