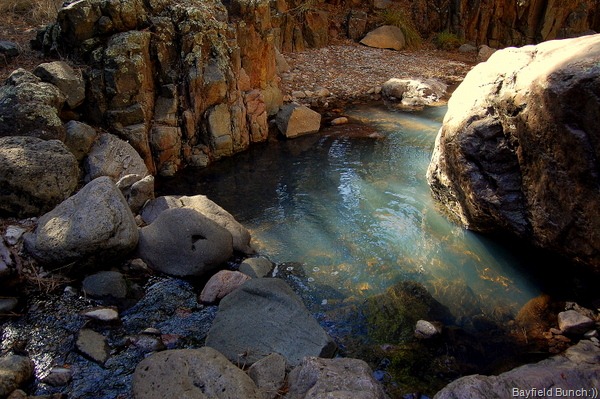 The first indication we had was a slight rattling in our roof’s air vent.  A few light ‘whoosh’ sounds & then the big east wind gusts came roaring down the slopes of the Swisshelm Mountains & broadsided us for about 5 continuous hours.  Our old arch enemy, the monstrous southwest winds had found & ambushed us again!! 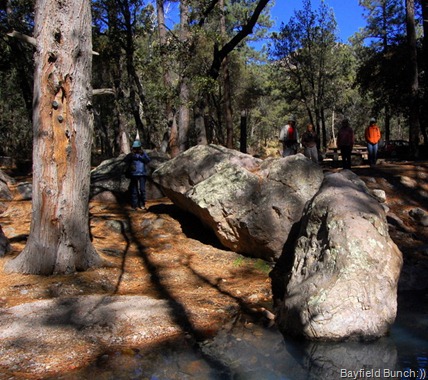 CAMPGROUND AREA AT THE END OF ROAD 74E IN RUCKER

Pixilation on our TV began around 9:20 as I was watching one of my favorite programs, Canada’s Corner Gas.  I like this show with it’s simple feeling good homespun & slightly corny comedic style.  I knew the pixilation was being caused by the wind shifting our satellite system & sure enough just as Jay Leno’s monologue was coming on we lost the signal.  I knew the jig was up then & there would be no more television until I could get out in the morning & re-align the dish.  No point in going out in the dark & wrestling with a big elliptical shaped satellite dish in heavy wind gusts.  I could have easily ended up in Yuma.  By the time I fell asleep the wind gusts were still howling & rocking the coach, but sometime during the night things quietly & thankfully settled down. 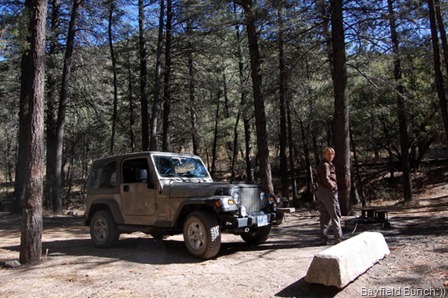 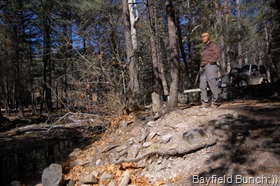 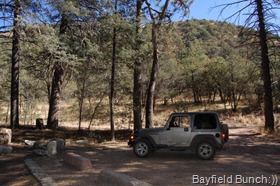 CHECKING OUT THE CYPRESS GROVE CAMPGROUND ON ROAD 74E

The big winds here in the southwest are like no other.  They come without warning day or night & many an RV’er has lost awnings in a matter of seconds & minutes.  They will slam dunk satellite dishes into the desert floor, rip doors out of an RV’ers hand & slam it against the rig twisting it like a pretzel.  The screaming Banshee sound & rocking to & fro causes many an RV’er to hurriedly pull slides in.  Outside lawn furniture is scattered & bamboo mats are curled up like paper.  Of all things we have encountered, it is the unpredictable & powerful southwest wind gusts that cause us more concern than any other one thing. 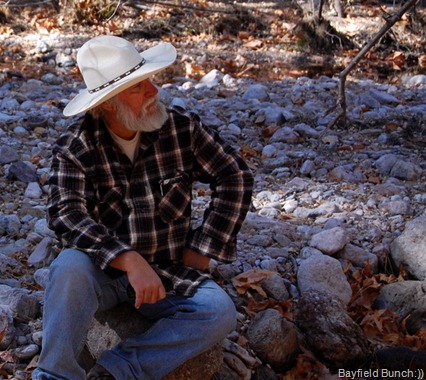 Try as the wind did, it did not slam dunk our satellite dish into the ground & there is a reason for that.  After having our Hughesnet/Starchoice elliptical dish dumped a couple times a few years back by the sweeping desert winds I had a fellow blogger email us with a solution.  Mike from MIKE & PAT'S TRAVELS had been using something for anchoring their satellite dish called, THE CLAW.  He said it worked great & that was good enough for me.  Ordered it online & within days are worries were over.  It was the Claw that held our dish to the ground last night despite the wind pulling up one of the spiked legs & breaking the small chain on another spiked leg.  The wind also turned the dish about 40* to one side.  The Claw is commonly used to anchor small aircraft wings, etc.   So, in my books it’s two thumbs up for……..The Claw:))  Of course if you are an RV Parker always on cement or pavement, none of the above applies!! 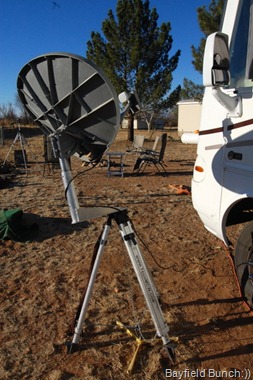 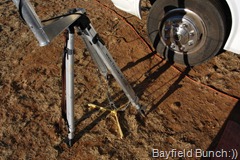 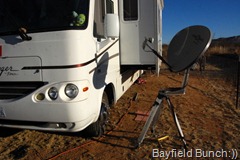 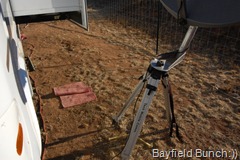 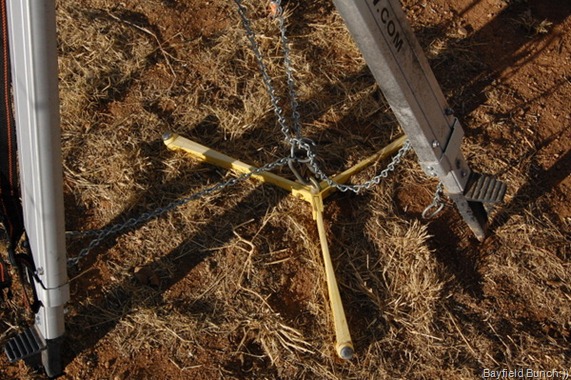 We, the Bunch, welcome two new blog Followers today.  A big welcome to Michael Kane. (couldn’t get your profile to open Mike) And, Nina Fussing comes in as our latest Follower with WHEELING IT.  Thanks for your support guys.  Always nice to meet new folks & see new faces on the Blog Followers list:)) 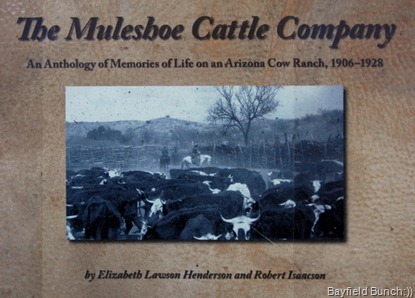 On our last Jeep tour with friends we Jeeped ourselves 30 miles northwest of Willcox Arizona to a place called, The Muleshoe Ranch.  Unfortunately it was not open but I just began reading a new book called, ‘The Muleshoe Cattle Company’ which is all about the Muleshoe Ranch & it’s surrounding territory.  Should be interesting & once again it deals with historical fact here in the southwest. 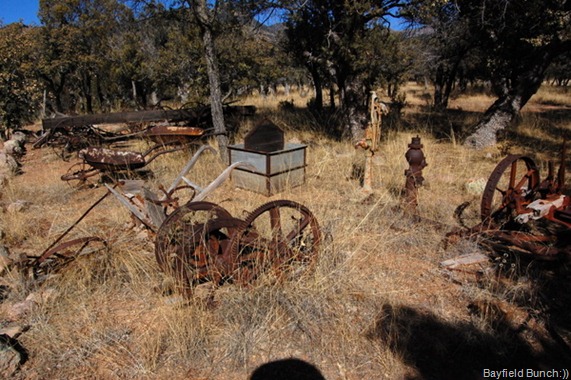 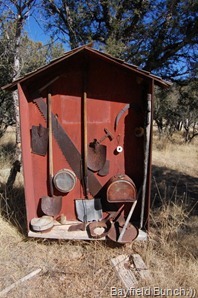 And, an interesting side note to all this Mule shoeing.  With the Muleshoe Ranch & the Muleshoe Cattle Company being in my thoughts, I ended up with one too many Mules on my mind!! I have been calling the hiking club in Bisbee…The Muleshoe Hiking Club & that is my one Muleshoe too many.  The correct name of the club is…The Muleteam Hiking Club.  I have gone back & made the corrections to Wednesday’s blog.  Thanks Paula:)) 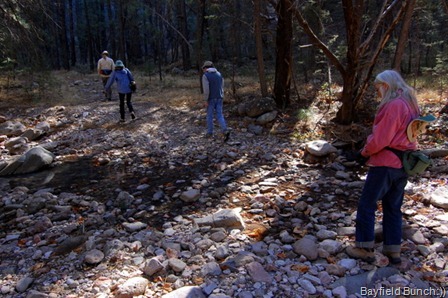 MULE TEAMERS PICKING THEIR WAY ACROSS A ROCKY CREEK BED:))

Came across this saying today.  “The pessimist complains about the wind; the optimist expects it to change; the realist adjusts the sails – William Arthur Ward.    Thank you Mr. Ward, whoever you are…..or were.  You definitely put a little wind in my sails today with that thought. 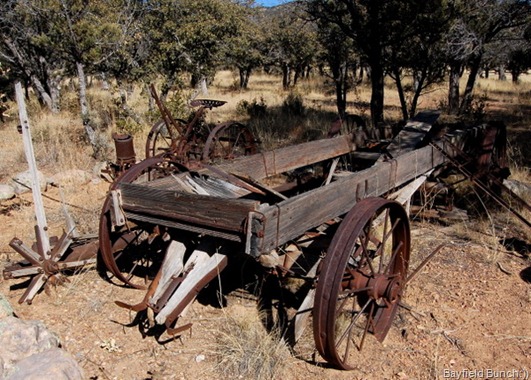 We generally like to follow an activity day with a resting day.  The two seem to work hand in hand these days & after Wednesday’s Rucker Canyon excursion today is a puttering & reading day.  Probably got something to do with age I guess.   I like to think we are a tad wiser now, but then again I like to think a lot of silly things.

You will notice the majority of todays photos are from Wednesday’s Rucker day. 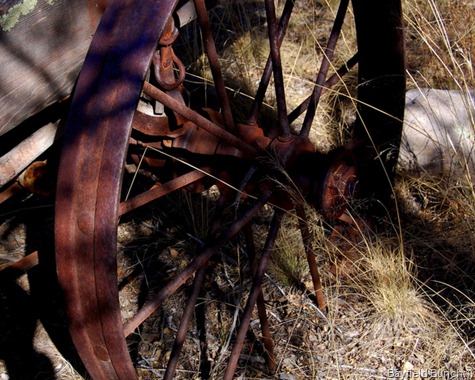 GROANER’S CORNER:((  A carrot crosses the road and is hit by a car.  He is rushed to the hospital, where he goes through hours of surgery.  After surgery the doctor comes into the carrot’s room and says, I’ve got good news and bad news.  The carrot says, give me the good news first, doc.  The doctor says, the good news is you are going to live.  And the bad news asks the carrot.
The bad news is your gonna be a vegetable for the rest of your life!!

The pessimist complains about the wind; the optimist expects it to change; the realist adjusts the sails -William Arthur Ward
The only thing better than right now will someday be the memories of right now…AL:))