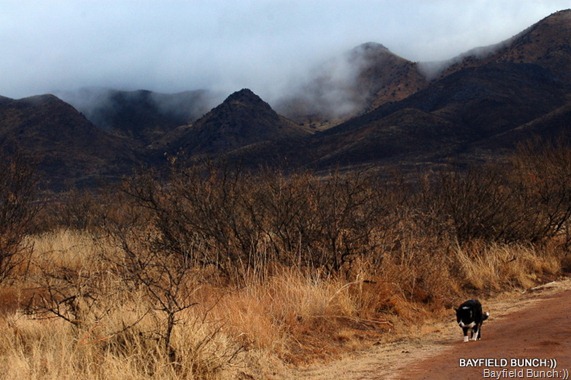 HEADING OUT THE LANEWAY ON OUR EARLY MORNING WALK

It was last summer one day when an email crossed my desk from a fellow by the name of Ed Frey.  Ed had stumbled across our blog somewhere & took an interest in our travels here in Arizona’s Sulphur Springs Valley.  Ed spent his earlier years in Cochise County where we are now staying.  Over the course of the last bunch of months, Ed & I have emailed back & forth & he has sent us links & info regarding history, people, places & things to see in the area.  Ed has been over in New Mexico around Silver City for the past couple months but today he rolled into Elfrida, hung a left towards the Swisshelm mountains & rolled into our laneway about 1:30.  What a pleasure it was to finally meet Ed.  Here is a totally interesting fellow who packed in the commercial banking world years ago, joined the Peace Corp & traveled far & wide around the world.  Ed was also a marathon bicycle rider having cycled across America & I saw a plaque in his Class C commemorating a 4,000+ mile ride.  Be sure to check out ED'S PROFILE for a guy with an interesting past.  It was great to talk with him this afternoon.  Ed is a solo RV’er & after spending tonight at a cousin’s place over near McNeil he’s moving on to Sierra Vista for a while to get some work done on his Class C.  He is truly a wandering western Nomad with no hard wired plans or destinations.  All the best to you Ed & thanks for dropping by today:)) 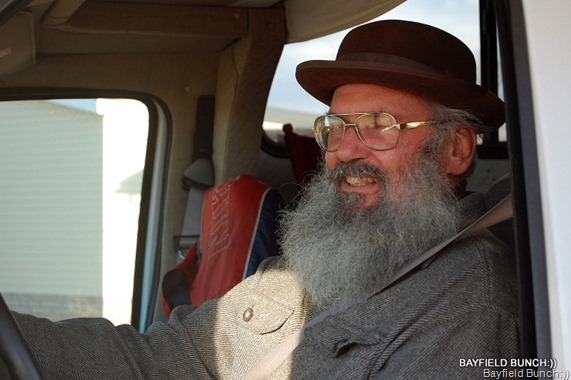 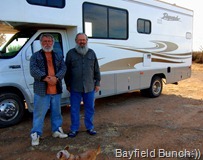 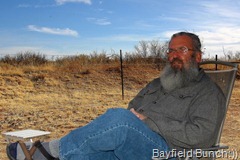 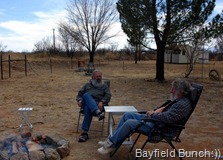 IT WAS A PLEASURE TO MEET ED FREY TODAY

WANDERING WILLY must be having a walloping great time over there in that Texas place  because we haven’t heard from him since December 8th.  If anybody’s driving through Texas, keep an eye out for WW.  Texas isn’t that big a place is it:)) 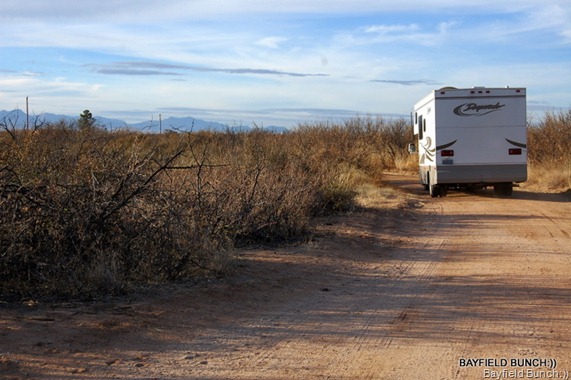 A few days ago I heard planes overhead again & was able to capture the following series of photos showing a mid-air fueling operation.  Two large fuel tankers were gassing up five A-10 Thunderbolts. (Warthogs)  This is a common sight over the Sulphur Springs Valley. 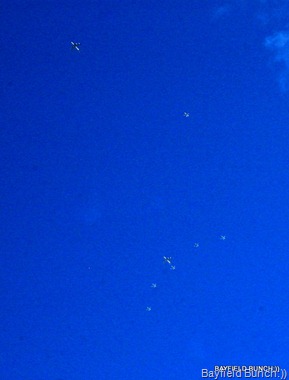 Had a rather creepy thing happen Christmas Eve & no, it did not have anything to do with Santa landing on our roof, but it did have everything to do with something landing on our roof!!   It was about 9:30 & Kelly had already gone to bed.  I was in my chair tapping away on my laptop when I heard a rustling sound at our door.  Thought it was just one of the dogs moving around over by the computer desk.  But no, a quick check told me the guys were all sound asleep & nowhere near the door.  The rustling only lasted about 5 seconds & stopped.  We have spotted a cat on the property from time to time so chalked it up to that.  But then came the creepy part. 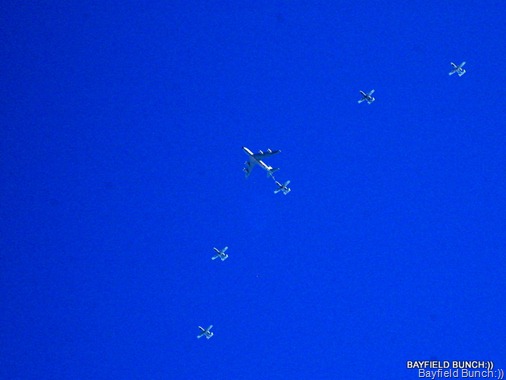 It was about 10 minutes later when suddenly, something slowly & deliberately walked along our Motor Home’s roof from front to back.  And, whatever it was, it walked upright on two legs!!  I followed the footstep sounds with my eyes as it walked past overhead right in the center of the roof.  My heart was just a racing because this was very scary.  I think it was fear that kept me riveted in my chair as I sat there with my mind racing to make some kind of logical sense out of what I was hearing.  The sounds were not  a heavy boot or shoe like human sound.  It sounded lighter & sharper. And, it was not a fast scrambling animal walk.  The steps were slow, methodical & every bit the gait of a small childlike human.  My mind could not think of an upright animal walking on two legs, & it was definitely two legs & not 4.  And, it never alerted any of the dogs……just me!!  Like the dogs, had I been asleep, I might not have heard the light footsteps either. 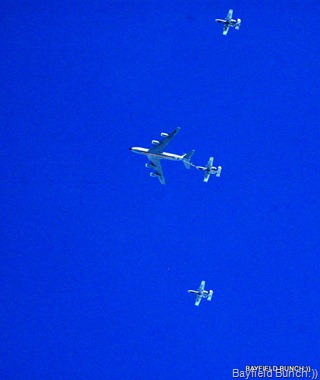 I absolutely had no intentions whatever of going outside but wouldn’t you know it, Max woke up minutes later & decided he wanted to go outside for pee break.  Now I had a problem because there is no way I wanted to go outside.  However, Max was half way down the inside steps & had to go.  With great reluctance & a healthy dose of ‘scared’ inside I slipped on my shoes, grabbed our baseball bat & a flashlight & reluctantly ventured out the door.  It is times like this when all those horror movies I have ever watched over the years came flooding into my mind.  I have quite an imagination which in good times is an enjoyably creative thing but Christmas Eve it was conjuring up all kinds of grotesque monsters & I had to really wrestle with myself to clear those images out of my mind. 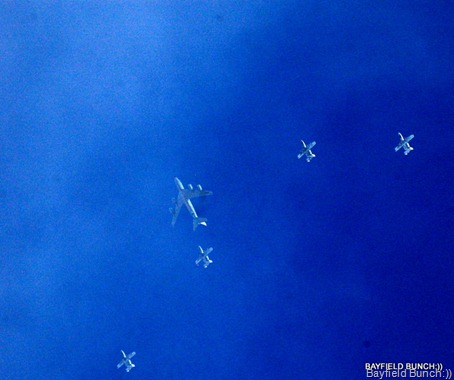 Max was ahead of me & I watched him for any signs of something wrong as we exited the coach.  I had the flashlight in overdrive as I shone it quickly around the yard from one dark corner to the other & then quickly back & up along the rigs roofline fully expecting some kind of hideous looking Alien on our roof.  But, nothing.  Max was walking around totally oblivious of my fears or any real or imagined intruders.  He did his business & I was relieved to get us both back in the coach with a locked door behind us…..but, it wasn’t over yet. 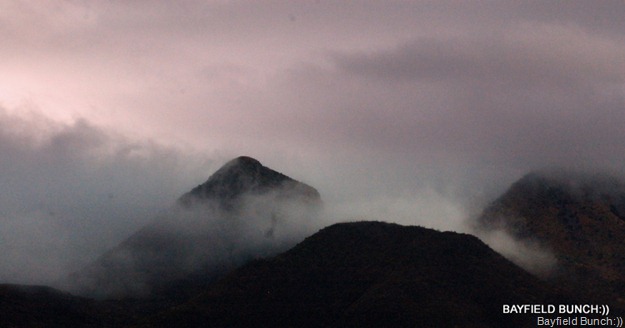 About 20 minutes later there was a definite bump & scrambling again at our door.  Only lasted a few seconds & all was quiet again.  Strange thing is that none of the dogs were alerted to this again.  Usually with anything like that going on they would be up & furiously barking at the door.  But, nothing!!  And no, I was not dozing in my chair & imaging anything.  I sat up for another half hour & the only conclusion I could come up with that made any remote sense to me was the unlikely possibility of an owl landing on the front part of the roof & then walking the length of the coach to the back.  We do have owls in the area & quite often during the day we do have smaller birds skitter scattering around on our roof.  I don’t think it is the time of year for nest building but could an owl have sensed a bird or bird’s maybe spending the night under a solar panel or something.  Not likely, but it was the only piece of remote logic I could put together long enough at the time to allow me to get to sleep later.  And, like I said at the beginning……this did not have anything to do with Santa Claus & his reindeer landing on our roof!!  I did climb up the rigs rear ladder in the morning & everything looked perfectly normal on the roof.  Didn’t want to go any further & run the risk of seeing some kind of large webbed human footprints in the dust on the roof or anything.  Remember the movie years ago, ‘Creature From The Black Lagoon.’  Enough was enough & it was time to put a lid on my imagination & get on with the reality of the day.  So, bottom line simply is………I will probably never know what 2 legged creature walked the length of our Motor Home roof on Christmas Eve of 2010.  And, if I told you this incident didn’t scare the absolute ba-jeebers out of me I would be lying right through my false teeth & my Pinocchio nose would surely grow & grow & grow……10-4!! 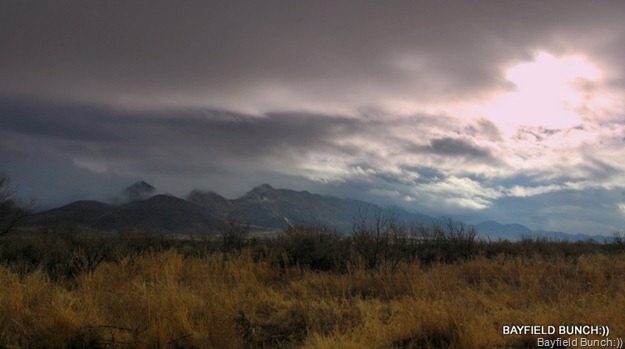 Kelly came across an interesting blog tracking site a couple days ago called, ICE ROCKET.  For bloggers interested in knowing more about the effects or influence their blogs may be having in Blog Land & many other areas of the internet, this is a very informative site. 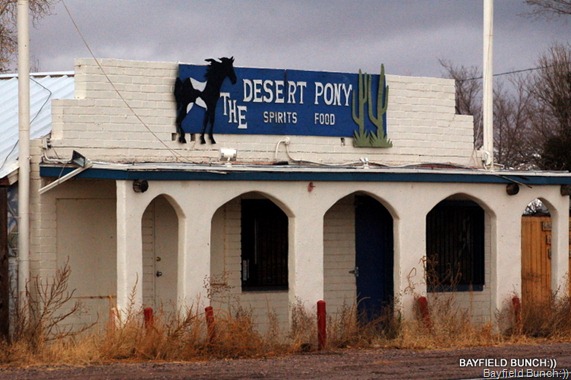 Noticed on our FEEDJIT statistics site that someone had typed into a search engine, ‘700mm telescope’ & were directed to our site.  Just in case that referral is in regards to my post a few days ago I should clear something up.  Technically speaking, my telescope is a Stellarvue Nighthawk 80mm F6 Refractor.  I traded in my ‘to big for me’ Dobsonian 8” Starhopper scope at O'NEIL PHOTO & OPTICAL in London, Ontario on the Nighthawk scope.  Joe O’Neil told me that by adapting my Nikon D50 to the lens, it in effect made the 80mm telescope equate photographically to 700mm.  So, that is why I refer to it as a 700mm telescope lens.  If I throw my 2X Teleconverter into that mix I can double that up up to 1400mm but that is really pushing the quality factor.  Scope is also equipped with an F2 Reflex Finder which casts a small red dot into the F2 sighting device enabling me to accurately find far off objects in the night sky.  I’m wondering if it was something from one of those far off Star Clusters I was spying on that landed on our roof Christmas Eve!! 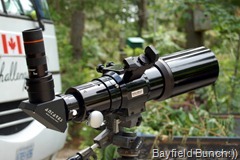 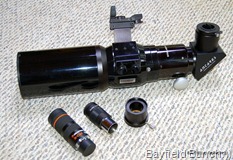 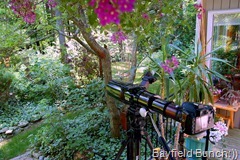 I should have enlarged Saturday’s Big Horn Sheep photo more so I have now done that below.  Various guesses have been coming in ranging from 3 to 10 sheep spotted on the rock face.  My guess is 6 for sure & maybe 7.  Two are slightly left & down a tad from center.  What looks like a third sheep at the end of a single file may or may not be a sheep.  Very hard to tell but I do think I see a leg there.  The other 4 are located straight across to the extreme right & down a bit.  Three are close together in single file & the darker one second in line may even be a Ram.  The fourth one is in line behind the other three but maybe back 6 feet or so.  I took the photo at the bottom end of the Palm Canyon trail.  If anyone can see any more Sheep, let me know:)) 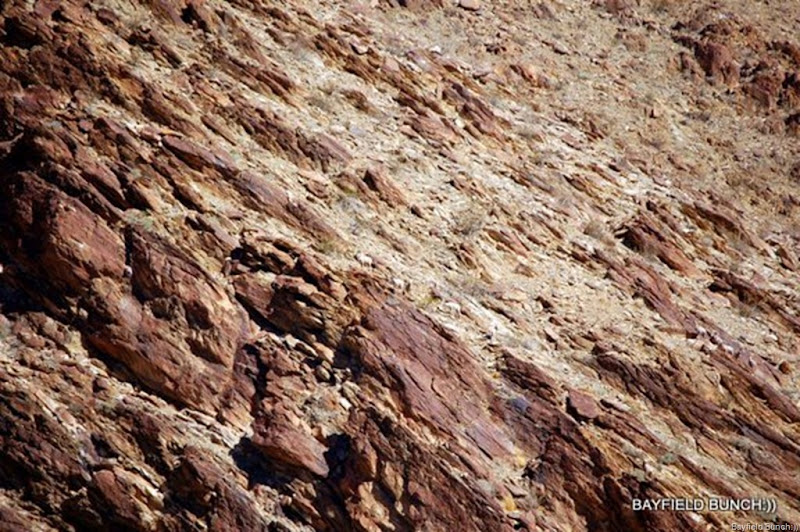 GROANER’S CORNER:((  A middle-aged Jewish guy is out to dinner with his wife to celebrate her fortieth birthday. He says, "So what would you like, Julie? A Jaguar? A sable coat? A diamond necklace?"  She says, "Bernie, I want a divorce."   He says, "I wasn't planning on spending that much."