COLD OUTSIDE SO WE STAYED WARM…INSIDE!! 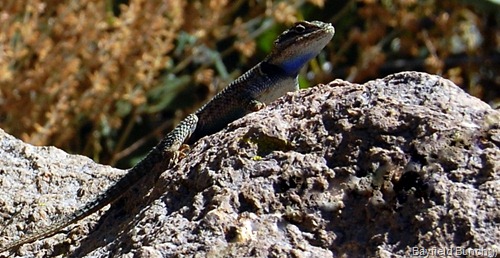 We sort of had it in our heads to maybe head back to the Chiricahua Monument today for another trail hike this morning.  For whatever reason we couldn’t seen to summon up enough mental energy to kick start our bodies into gear so we ended up spending a quiet day around the rig.  An increasing cloud cover made the already cool North wind feel colder & also served to drop the temperatures today.  Sunny skies Friday so that may make for warmer air in the mountains. 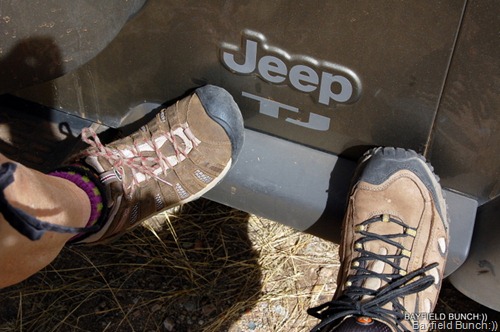 BET YOU DIDN’T KNOW WE CHOSE OUR JEEP’S COLOR TO MATCH OUR HIKING BOOTS:))

Gathered up some more dead Yucca stocks over in the Swisshelm mountains a couple days ago.  They are great for getting campfires going & burn well.  By being the camera man I get myself out of a lot of work:))  Actually, I used to use my camera to hide behind years ago at social activities like dances, wedding receptions & stuff.  Always had a camera in my hand taking pictures of folks & if anybody asked me to dance or something I would always use the excuse that I was busy taking pictures.  Shy people just gotta do what they gotta do sometimes!!  Never cared much for that dancing stuff anyway.  Professional dancers are nice to watch but at the local dances I always figured watching two people dancing was akin to watching a vertical wrestling match!! 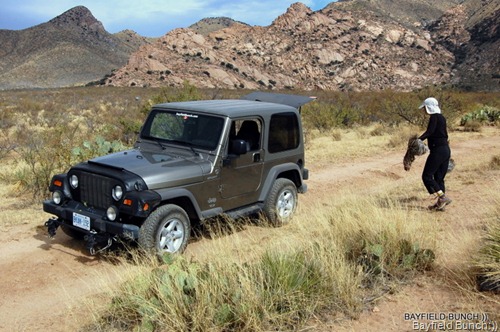 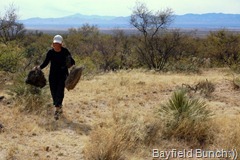 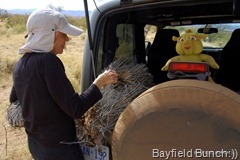 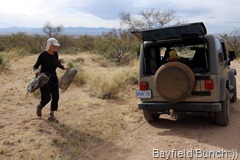 We have a busy few days coming up next week.  We’re heading off to meet Eve at the GRAPEVINE CANYON RANCH on Tuesday morning.  She is one of the folks in our blog’s right hand column under, ‘Blogs We Follow.’  Wednesday is a Jeep tour with some friends in the Dragoon Mountains & the next two days will be spent helping load a truck with all the belongings from the house where we are located right now.  But, more about all that next week. 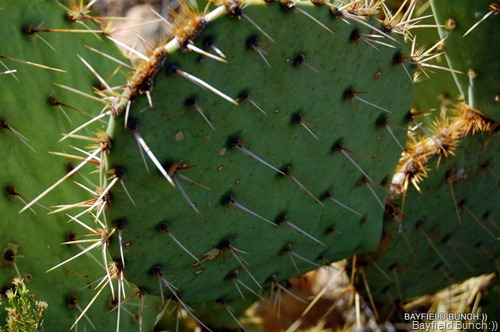 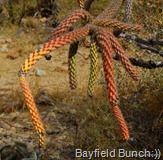 The more time we spend at this location a few miles east of Elfrida the more it makes us wish we had a similar type of place to live.  There are no cars going by, no human sounds of any kind.  No lights to pollute the night sky,  & no train whistles in the night.  Only sounds are the wind & the birds.  The curving laneway leads to a dirt road we can’t see & we have a fenced in acre of land with a locked gate.  Sure makes me want to do something about our present location back in Canada, that’s for sure. 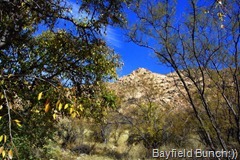 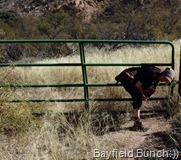 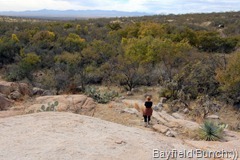 KELLY IS SLIM ENOUGH TO FIT THROUGH THE GATES BUT ME, THE BULBOUS ONE, HAS TO LUMBER UP ONE SIDE OF THE GATE & CRASH INTO A JELLO-Y HEAP ON THE OTHER

At one point in the Swisshelm’s the other day Kelly called me over to look at what she called, ‘the spooky looking fog on the ground.’  Turns out the cottony looking fog was coming from what I think looks like a Desert Broom plant. 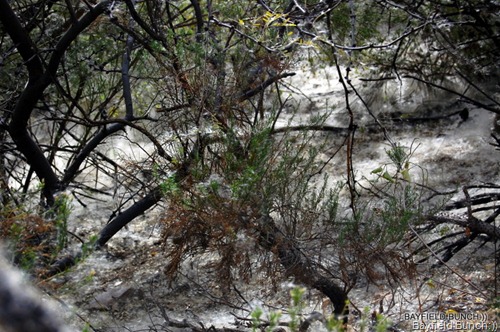 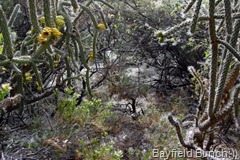 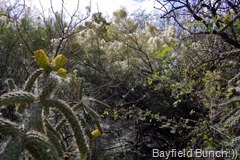 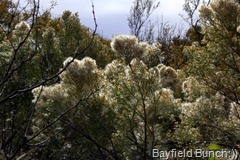 And again I would just like to mention how pleased we are with this Cradlepoint Router set up we now have up & running.  I have finally been able to get some of my backlogged email correspondence off the back burner & out the front door. 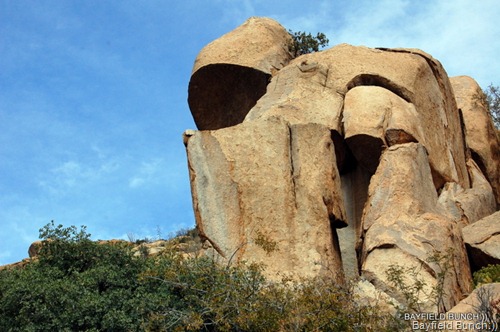 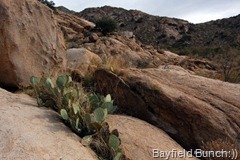 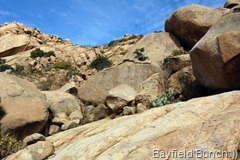 Someone asked what the Mortero’s are.  I did look on Google for an explanation but didn’t find one so I’ll attempt to explain what it is.  On a flat rock surface a person will place some seeds & then with another rock (pestle) they will grind those seeds into a powder to be used in cooking.  After repeated grindings the pestle begins to slowly create an indentation in the rock.  Over a period of daily use these indentation soon begin to wear themselves into actual holes in the rock.  This is an advantage because now more seeds can be dumped into the hole without the fear of them blowing away in the wind or being scattered by the grinding process.  We have seen Morteros a foot deep so you can imagine the hard work & time spent on grinding seeds with a rock on a bigger rock to actually wear a hole in the rock itself that deep. (Morteros are in left photo below) 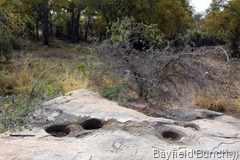 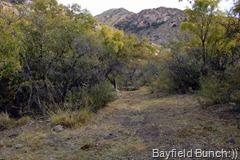 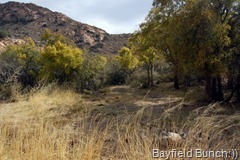 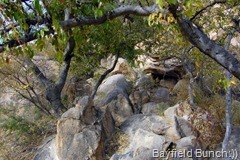 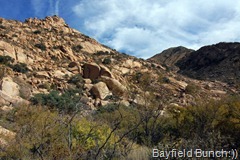 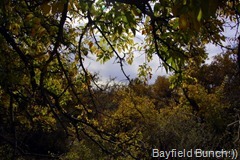 THERE ARE NOT ALWAYS SMOOTH PATHWAYS WHERE WE WALK

Had a question about the map we, & many others have on our blogsites with all the States & Provinces colored in showing where people have traveled.  I cannot remember where I got that from so wondered if someone out there could email us or leave a comment where to get that type of map.  I will put that info into the next blog.

GROANER’S CORNER:((  And how about a little pun-able fun with some fellow bloggers:))

Did you know that JANNA  once fell into her upholstery machine and is now completely recovered.

RETIRED ROD sent RICK some dead batteries the other day – free of charge.

DONNA is known around her town of Sandwich as quite a recycler.
Yesterday she rode her bike twice.

BIG DAWG & FREEWAY said they knew a fellow who quit dating the telephone operator because he felt disconnected. Besides, she had too many hangups.

WANDERING WILLY stole a calendar once. He got twelve months but emailed his friends to say, I grew herbs and worked in the jail’s kitchen where I served my thyme.

JOHN B. over in Texas stretched out in his chair & thought to himself, I'm inclined to be laid back.

THE WANDERING WISHNIES came to the conclusion that the mechanic at the local transmission shop seemed a little shifty.

MIKE & GERRI a few weeks ago said the lights were too bright at the Chinese restaurant so the manager decided to dim sum.

FROGGI DONNA brought it to our attention about a new type of broom that has come out, it is sweeping the nation.

Folks over at THE MOHO figured the ankle was an arch enemy of the heel because the heel had a sole that could neither toe the line nor keep instep.

LOREE tells us she used to do rock climbing as a youth, but  was much boulder back then.

And JOHN says if you jumped off the bridge in Paris, you’d be in Seine

GYPSY dropped a big tub of margarine in the kitchen of her new Lance camper…now she has a Parkay floor.

IVAN couldn’t be on-line this afternoon because he’s on his way to visit some old girlfriends in Cuba. I hope he’s Havana good time.

LAURIE out in Sacramento says if you believe restaurants always overcook steaks, then you probably order them rarely.

WAYNE & ROBERTA knew a bowler who preferred to enter and exit his apartment via the fire escape because it was right down his alley.

JUDY says, show me a piano falling down a mineshaft and I’ll show you A-flat minor.

And RANDY said, it wasn’t school he disliked, it was just the principal of it.

Did you know JENNIFER nearly married a TV repair tech once. The reception would have been great!

ED signed up to be an organ donor; he really put his heart into it.

CHUCK & ANNEKE wondered if we had heard about the Buddhist who refused Novocain during a root canal? His goal: transcend dental medication.

SAM wanted to run an on-line origami school, but it folded.

On the track team, JERRY had a fear of hurdles, but he got over it.

SANDRA up there in cold old Canada tells us about a dog that gave birth to puppies near the road and was cited for littering.

And MIKE tells us of the two silk worms that had a race up at North Ranch. They ended up in a tie.

And KAREN said, once her & Stevio were sitting in their kayak & became chilly, so they lit a fire in the craft. Unsurprisingly it sank, proving once again that you can’t have your kayak and heat it too.

Did you hear about AL who sent more than ten puns to friends, with the hope that at least one of the puns would make them laugh. No pun in ten did.