LOOKING BACK ON A SCHOOL BUS STORY:)) 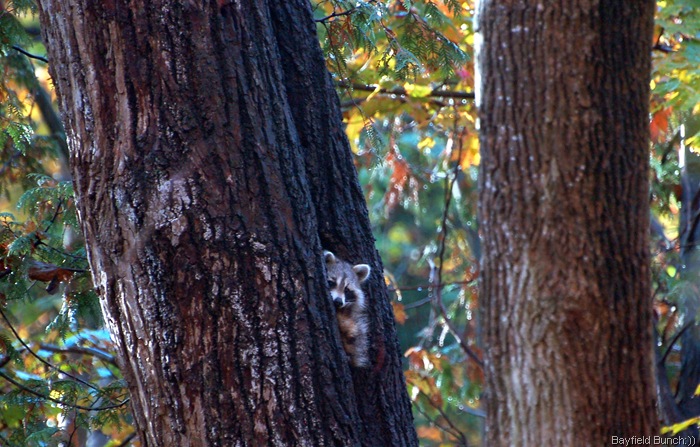 MAX, CHECKERS & I WERE BEING WATCHED ON THE TRAIL THIS MORNING

No mobility van drives so it turned out to be a day of home & Motor Home puttering.  Just a lot of small things again.  Packing this here & moving that there.  Dusted off both my cowboy hats this afternoon & put them in the rig.  Can't wear big cowboy hats around these parts or people would point & stare figuring I had escaped from a correctional center or something.  Standard head gear is a baseball hat here in the northern latitudes but down south.......Hi Yo Silver, it's cowboy hats all the way:))))) And here's something I never thought about.

ME & MY DOG had a post Thursday regarding publishing posts, editing, re-editing etc. I sure hope this isn't happening with my posts but maybe it is because I am in the habit of re-publishing my blog if & when I find errors in it. Nobody has ever brought it to my attention yet, but........ 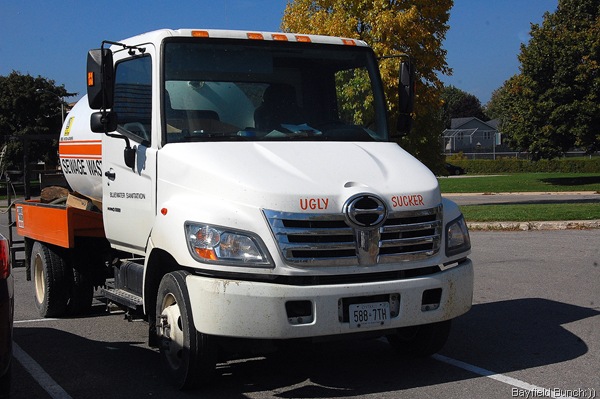 SEEN IN GODERICH ONTARIO......SELF EXPLANATORY  (tonight's photos are a mish mosh of pics) 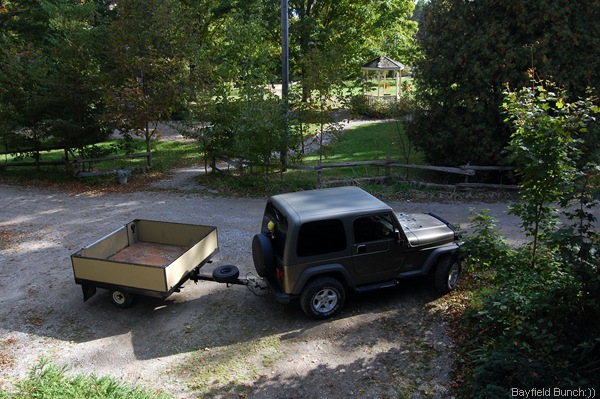 Now, time for a little backtracking.  I should have explained in Thursday night's blog that the fellow who's air line I stepped on was just fine.  I had picked him up at home & transported him to the hospital for an appointment.  People who have home oxygen are well instructed on the care & use of their equipment so when the oxygen hose was abruptly pulled out the fellow just simply re-inserted it & I helped put the 'over the ears' holding line back on.  He wasn't bothered by it all & I think the only one feeling bad was me for not noticing the long plastic & transparent oxygen hose trailing out from behind the wheelchair.  Good thing it wasn't an IV line eh!!

And to backtrack a little further to my Boondocking post, I was talking about refilling the fresh water tank while out in the desert.  RETIRED ROD suggests....."There are also some 40 or 50 gallon bladders available that you can put in the back of your truck to bring fresh water out to your site.  Some folks will take a RV water pump and rig it up so they can pump the water directly into their rig's tank.  Plug the water pump into the cigarette lighter socket and off load the entire tank!  Most folks go to town at least every other day, so running out of water shouldn't happen!" 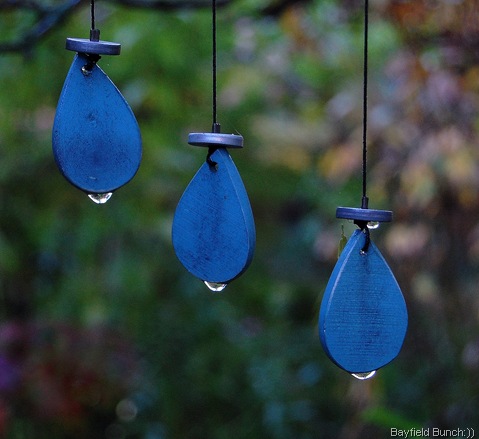 GYPSY was wondering if we needed the generator on while Boondocking to run the A/C & my answer to this is, 'yes.'  In the 4 years we have had the Motor Home we probably wouldn't even have 3 hour's running time on either of our A/C's.  Hot humid days are not a problem in the Southwest during the winter.  Our windows & doors are always open so it's rare for us to use A/C 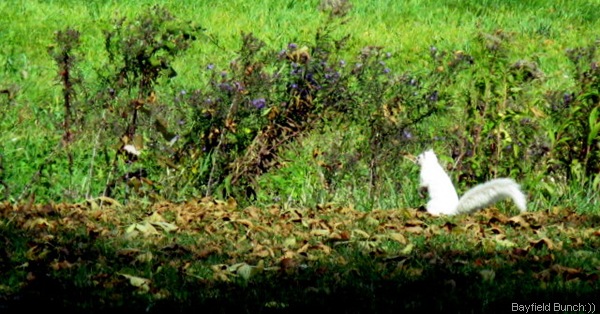 ONE OF EXETER'S WHITE SQUIRRELS...(only had my small point & shoot with me)

And a note regarding the AM 740 ZOOMER RADIO   site.  When you open the site just look to the top right for a large round gray button that will say, 'On the Air.'  Click that & you should be able to hear the station.   The Zoomer's club is on the site as well but you do not have to join that to hear Zoomer radio.  I should also mention in regards to my 'photo organization' blog that my main confusion is in trying to organize my photos into my Smug Mug site.  I always categorize my photos by month & year taken.  I don't break them down into categories like flowers, sunsets, family, etc.  All the pics I take in 'September 2010' are in a folder by the same name.  Someone asked about photo storage in web albums & yes, Picasa has their own web albums which I have been using since I started all this.  Just type in Picasa Web Albums to Google & you will find the site.  My Picasa Web Albums are here.....  BAYFIELD BUNCH'S PICASA WEB ALBUMS  I hope that catches me up on some of the questions.  I still have some emails to send regarding others. 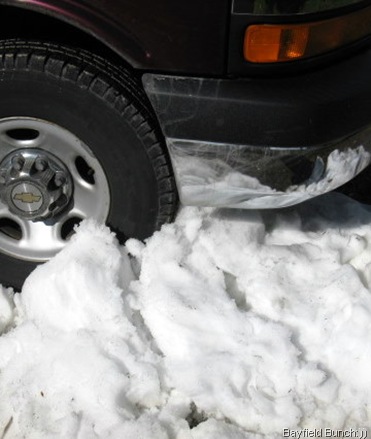 AWWWW NUTS, I RAN INTO A SNOW DRIFT WITH THE MOBILITY VAN IN HENSALL ONTARIO THURSDAY!! 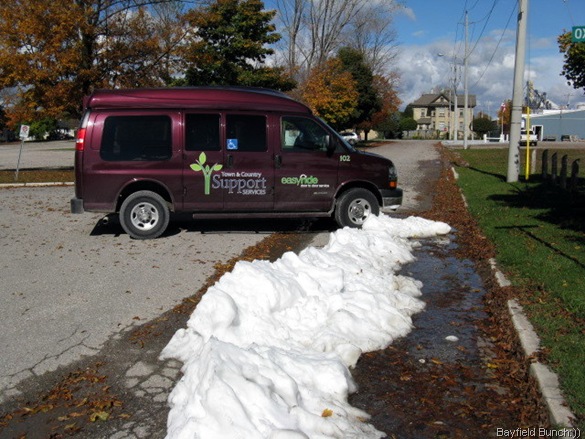 SNOW FROM THE REFRIGERATION UNIT IN THE ARENA:)) 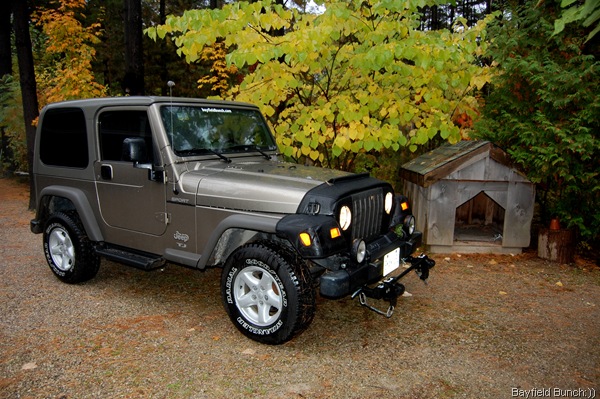 On my way home from Exeter Thursday I followed along behind a school bus for awhile.  Watching the little kids get off at one stop I was reminded of my school bus driving days & the time a public school principal from the East Wawanosh Public School in Belgrave Ontario had to come out the bus & give me a scolding.  Before I had my own school bus run in this area I would often fill in on routes where other drivers were off on medical leaves, etc.  It was late March 2005 when I took over a bus route from an older lady who finally retired driving the same school bus route since Abe Lincoln was a small boy.  I was told she ran a totally strict bus with absolutely no Tom Foolery or shenanigans going on.  It was a quiet bus & it was a disciplined bus.  The crew was made up of about 30 small children & 5 young teenagers.  By the time I put on my Captain's hat & slid into the driver's seat I had no idea what I was in for. 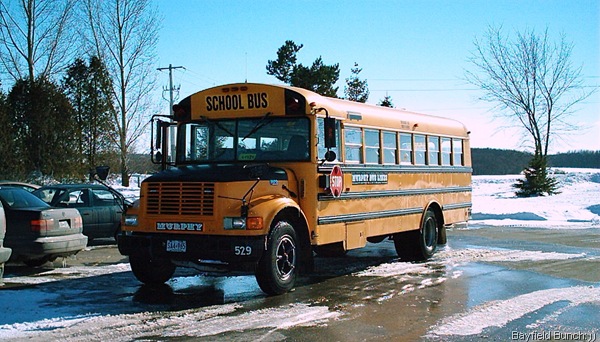 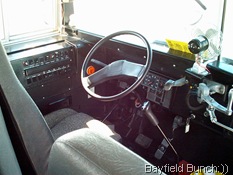 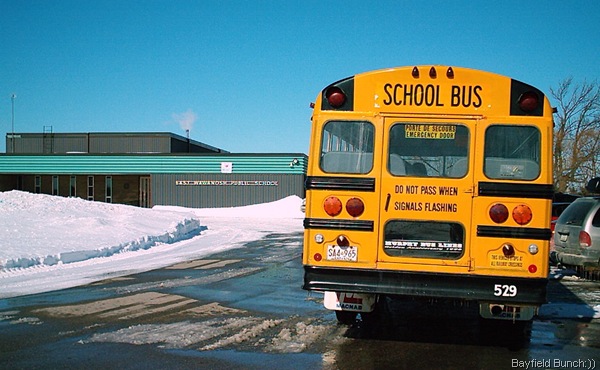 THIS WAS MY 'KIDS' SCHOOL BUS

It was the one & only time in my entire life I had ever interacted with or been responsible for a group of children.  Never happened before & has never happened since.  I was a fish out of water & had no idea what to do except drive the bus & that's what I did for those first few quiet days.  The thought did occur to me that, how is it possible to have so many kids together without any noise.  The first few days I would say 'good morning' to the kids getting on the bus but few of them had much of a response.  I think it was about the third day when a little girl sitting directly behind me finally spoke.  She asked me who I was.  (guess I hadn't told them)  Well, with that simple little question, the ice was broken.  I basically operate with a kid's imagination at the best of times anyway so I answered her with marvelous great story of some kind.  Well, that did it.  There was laughter coming from behind me.  More questions & more zany answers.  Pretty soon the questions were zanier than the answers, the stage was set, & for the next 3 months or so anybody could have heard our bus coming from a country mile away.  It was a bus filled with laughter, kibitzing & kids just being kids.  And there was me, right in the middle of it, the biggest kid of them all.  And then.....the hammer came down:(( 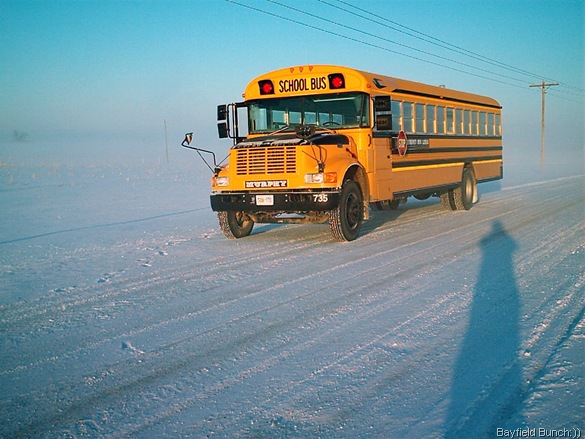 DIFFERENT BUS ROUTE BUT YEP, THAT'S ME IN THE SHADOW THERE ALIGHT

I was parked in front of the school one fine spring afternoon waiting for the kids to come piling out & onto the bus.  Checked my passenger mirror & saw the young lady principal coming along the sidewalk.  She swung up into the bus with a friendly "Hello Al."  The next words out of her mouth were, "I've had complaints about what is going on aboard your bus!!" but it was the next thing she said that totally floored me.  She said the complaints were placed by the 5 teen-agers on the bus!!  She explained how those 5 teens had been riding this same bus since the day they started school way back when.  For all those years they were not allowed out of their seats, no loud voices, no acting up & no having the kind of fun kids like to have.  Anybody who has ever watched Southpark & seen the school bus driver, Miss Crabtree, will understand.  Those teens on my bus were totally resentful at what all the kids were getting away with now & having the fun they were never allowed to have.  They were resentful of the noise, the laughter, & the freedom. 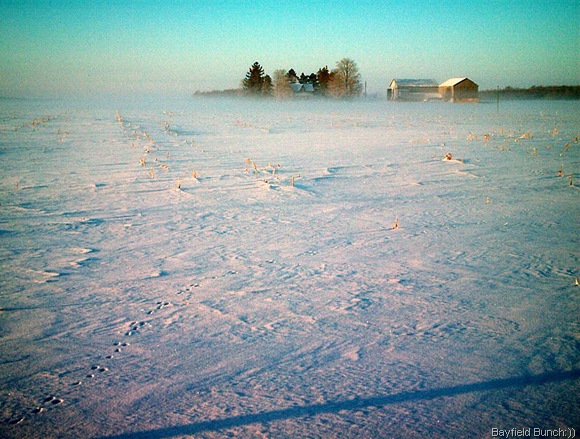 A FEW VIEWS FROM THE DRIVER'S SEAT....is it any wonder we like to go south!! 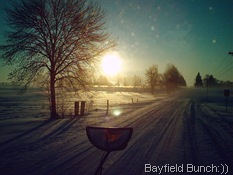 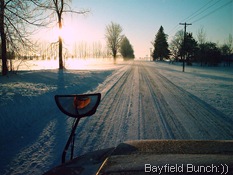 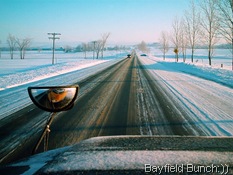 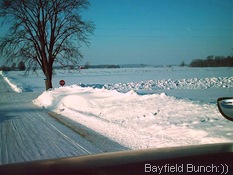 The principal was very good about it all & just asked me to quiet things down on the bus a bit & get a handle on the circus like atmosphere.  I told her 'no problem' & she headed on back into the school.  The only thing that saved me from her having to come out & talk to me about the rowdy bus problem was the fact it was only a short time until the end of the school year because you know what......right up until the last day of school, anybody could have still heard us coming a good country mile away:))))))))) 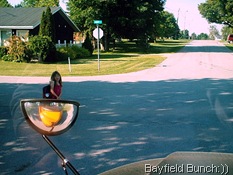 THIS IS THE LITTLE GIRL WHO BROKE THE ICE & THAT'S 'NOISY NICK' WHO GAVE ME THE HARDEST TIME OF THE WHOLE BUNCH!! 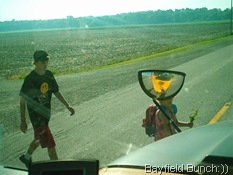 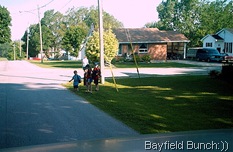 Say, have I blogged about the time I got called up on the carpet because of a snowball fight on my school bus.  Or the time police called the bus company about one of there unmarked cars being mooned by teenagers riding in the back of a school bus.  Yep, that was my bus alright & I was in trouble over that one too:((  And have I shown you pics of the time 'Snoopy' rode the school bus:)) 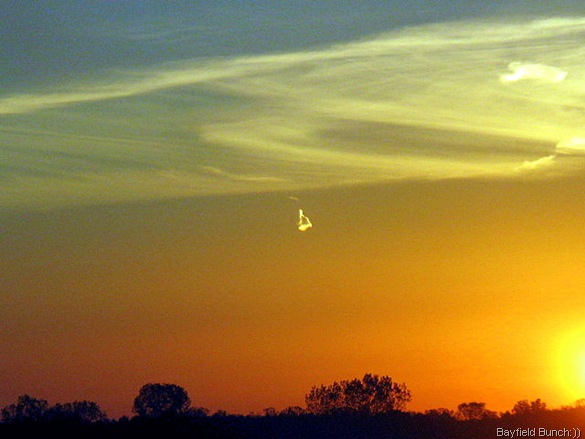 OH, & ABOUT THAT UFO PHOTO EARLIER....IT WAS JUST A CLOUD ANOMALY:))

GROANER'S CORNER:))  I urgently needed a few days off work, but, I knew the Boss would not allow me to take a leave.  I thought that maybe if I acted 'Crazy' then he would tell me to take a few days off.  So I hung upside-down on the ceiling and made funny noises. My co-worker (who's blonde) asked me what I was doing.  I told her that I was pretending to be a light bulb so that the Boss would think I was 'Crazy' and give me a few days off.  A few minutes later the Boss came into the office and asked, 'What in the name of good GOD are you doing?'  I told him I was a light bulb.  He said, 'You are clearly stressed out.' Go home and recuperate for a couple of days.'  I jumped down and walked out of the office...  When my co-worker (the blonde) followed me, the Boss asked her, '..And where do you think you're going?!'